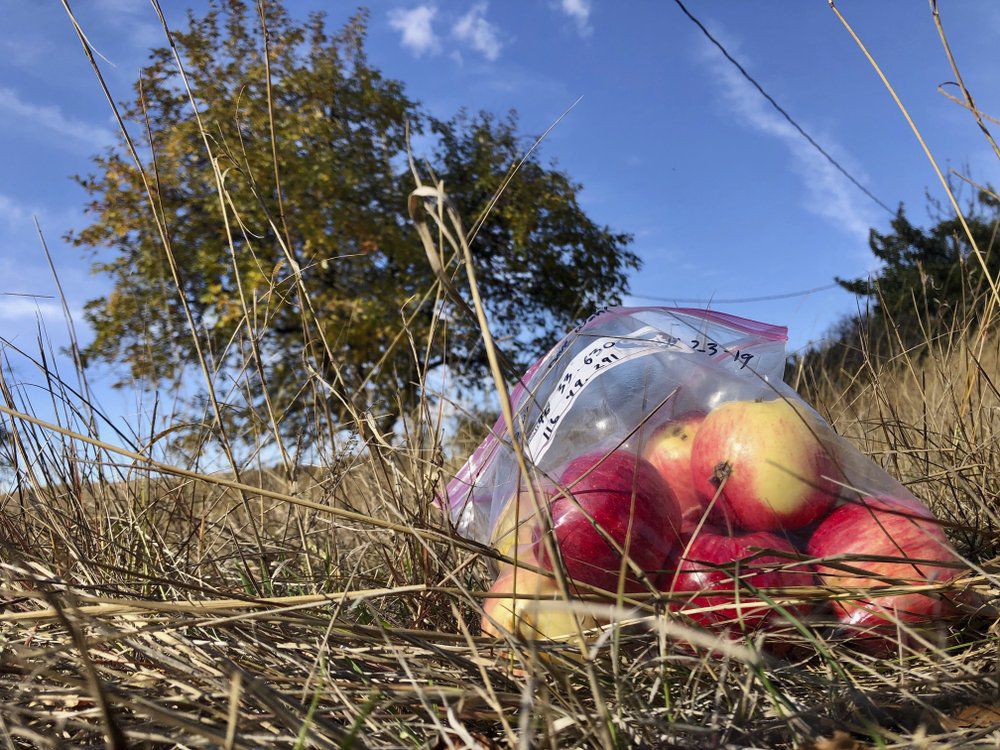 This Oct. 23, 2019, photo shows apples collected by amateur botanists David Benscoter and EJ Brandt of the Lost Apple Project in an orchard at an abandoned homestead near Genesee, Idaho. Benscoter and Brandt recently learned that their work in 2019 has led to the rediscovery of 10 apple varieties in the Pacific Northwest that were planted by long-ago pioneers and had been thought extinct. 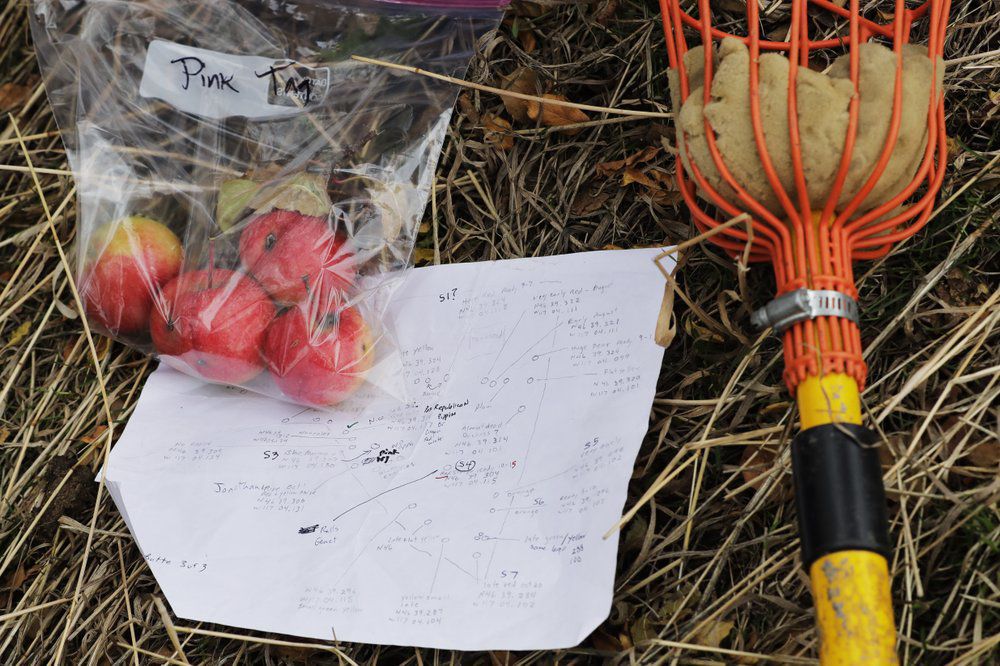 In this Oct. 28, 2019, photo, apples collected by amateur botanist David Benscoter, of the Lost Apple Project, rest next to his field notes and an apple picking pole in an orchard at a remote homestead near Pullman, Wash. Benscoter and fellow amateur botanist EJ Brandt recently learned that their work in the fall of 2019 has led to the rediscovery of 10 apple varieties in the Pacific Northwest that were planted by long-ago pioneers and had been thought extinct.

PORTLAND— A team of retirees that scours the remote ravines and windswept plains of the Pacific Northwest for long-forgotten pioneer orchards has rediscovered 10 apple varieties that were believed to be extinct — the largest number ever unearthed in a single season by the nonprofit Lost Apple Project.

The Vietnam veteran and former FBI agent who make up the nonprofit recently learned of their tally from last fall’s apple sleuthing from expert botanists at the Temperate Orchard Conservancy in Oregon, where all the apples are sent for study and identification. The apples positively identified as previously “lost” were among hundreds of fruits collected in October and November from 140-year-old orchards tucked into small canyons or hidden in forests that have since grown up around them in rural Idaho and Washington state.

“It was just one heck of a season. It was almost unbelievable. If we had found one apple or two apples a year in the past, we thought were were doing good. But we were getting one after another after another,” said EJ Brandt, who hunts for the apples along with fellow amateur botanist David Benscoter. “I don’t know how we’re going to keep up with that.”

Each fall, Brandt and Benscoter spend countless hours and log hundreds of miles searching for ancient — and often dying — apple trees across the Pacific Northwest by truck, all-terrain vehicle and on foot. They collect hundreds of apples from long-abandoned orchards that they find using old maps, county fair records, newspaper clippings and nursery sales ledgers that can tell them which homesteader bought what apple tree and when the purchase happened.

By matching names from those records with property maps, they can pinpoint where an orchard might have been — and they often find a few specimens still growing there. The pair carefully note the location of each tree using GPS and tag the tree with a plastic band before bagging the apples in zip-close bags and shipping them to the Oregon experts for identification.

“When I find an apple that’s lost, I want to know who homesteaded it, when they were there, who their children were, when they took their last drink of water,” Brandt said. “We cannot afford to lose the name of even one of these landowners.”

In the winter, they return to the trees to take wood cuttings that can be grafted onto root stock to propagate new trees of the varieties that come back as “lost” specimens.

The task is huge. North America once had 17,000 named varieties of domesticated apples, but only about 4,500 are known to exist today.

The Lost Apple Project believes settlers planted a few hundred varieties in their corner of the Pacific Northwest alone as they moved across the U. S. West to try their hands at the pioneer life.

These newcomers planted orchards with enough variety to get them through the long winter, with apples that ripened from early spring until the first frosts. Many were brought with the settlers in buckets from their homes on the East Coast and in the Midwest. Then, as now, trees planted for eating apples were not raised from seeds; cuttings taken from existing trees were grafted onto a generic root stock and raised to maturity. These cloned trees remove the genetic variation that often makes “wild” apples inedible.

With the 10 latest varieties identified, Brandt and Benscoter have rediscovered a total of 23 varieties. The latest finds include the Sary Sinap, an ancient apple from Turkey; the Streaked Pippin, which may have originated as early as 1744 in New York; and the Butter Sweet of Pennsylvania, a variety that was first noted in a trial orchard in Illinois in 1901.

Botanists from the Temperate Orchard Society identified them by comparing the collected apples to watercolor illustrations created by the U.S. Department of Agriculture in the 1800s and early 1900s and by poring over written descriptions in old botany textbooks and reference guides, some of them more than 150 years old.

One apple, the Gold Ridge, was particularly hard to identify because the experts couldn’t find any illustrations or descriptions of it anywhere. Finally, botanist Joanie Cooper went page by page through a reference book written by a botanist who died in 1912 until she found it.

“It’s the luck of the draw,” said Shaun Shepherd, another Temperate Orchard Conservancy botanist. “And we learn more as we go along.”

With spring underway, the Lost Apple Project will soon enter its busy season as apple trees everywhere blossom and prepare to fruit. As they wait, Brandt and Benscoter are busy grafting wood cuttings from the newly discovered “lost” apple trees onto root stocks and updating their records from the last season.

Their nonprofit took a hit when they had to cancel an annual fair where they sell newly grafted “lost” apple trees and a class on how to graft wood to grow a new apple tree because of the new coronavirus. The two events fund much of their $10,000 annual budget.

that goes toward travel costs, apple shipping and apple identification.

“Two months ago, I was thinking: ‘This is going to be great. We’ve got 10 varieties that have been rediscovered,’ but .... right now, we couldn’t pay our bills,” Benscoter said.

Still, the self-described apple detectives take comfort in their work as they navigate today’s unprecedented times and find inspiration in imagining the lives of the pioneers who planted these trees. About 25% of homesteads didn’t make it, Brandt said, and many settlers died or simply walked away to avoid starvation.

“It was a hard life. I can’t even imagine what they went through, but they survived and they went on with their lives,” he said. “It’s hard now, too, but it’s going to be OK. It’s all a part of life.”

Find the Lost Apple Project on Facebook at www.facebook.com/lostappleproject/