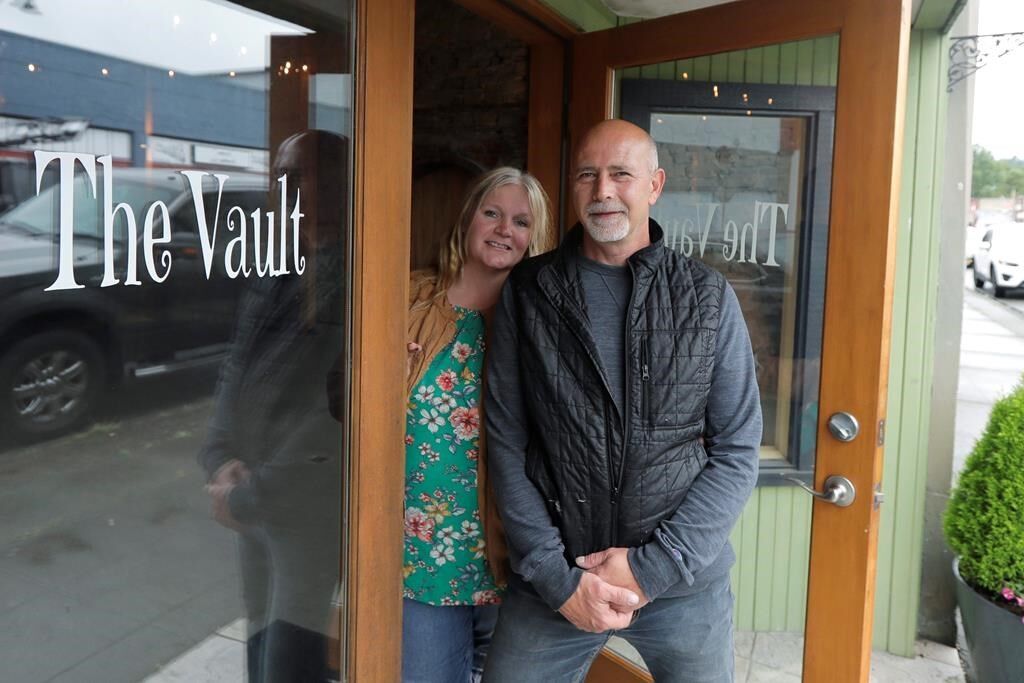 Stephanie Skoglund and her husband, Rick, own The Vault, a wedding and event center in Tenino, Washington. Skoglund’s schedule was packed with dozens of events before the coronavirus outbreak forced her to close in mid-March and left her business, like so many others, on the brink. 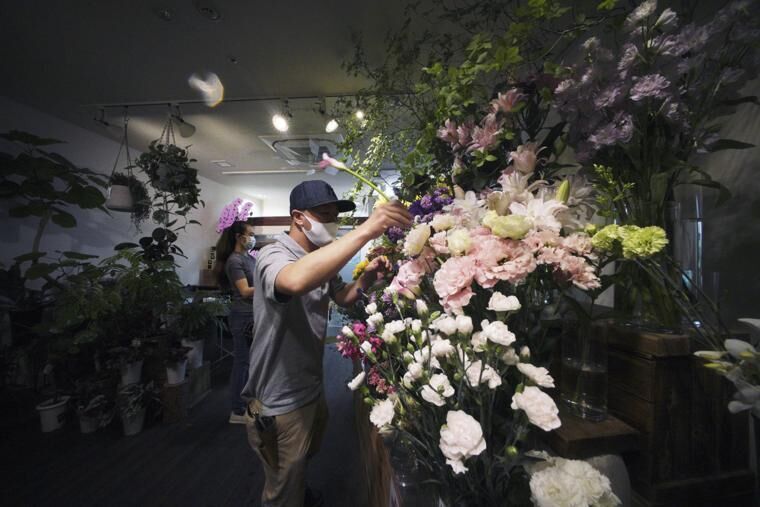 Shinichiro Hirano arranges flowers at his Sun Flower Shop in Tokyo on June 22. When Japanese officials asked people to stay home in March, the shop was allowed to stay open. The store, not far from the venue of Tokyo Olympics, had been expecting a boom, only to see it fizzle when the games were postponed due to the pandemic.

Stephanie Skoglund and her husband, Rick, own The Vault, a wedding and event center in Tenino, Washington. Skoglund’s schedule was packed with dozens of events before the coronavirus outbreak forced her to close in mid-March and left her business, like so many others, on the brink.

Shinichiro Hirano arranges flowers at his Sun Flower Shop in Tokyo on June 22. When Japanese officials asked people to stay home in March, the shop was allowed to stay open. The store, not far from the venue of Tokyo Olympics, had been expecting a boom, only to see it fizzle when the games were postponed due to the pandemic.

NEW YORK — Hour after hour in the dark, Chander Shekhar’s mind raced ahead to morning.

More than three months had dragged by since the coronavirus forced Shekhar to close his business — a narrow, second-floor shop racked with vibrantly colored saris, on a block in New York’s Jackson Heights neighborhood once thronged with South Asian immigrant shoppers. Today, finally, he and other merchants were allowed to reopen their doors.

But they were returning to an area where COVID-19 had killed hundreds, leaving sidewalks desolate and storefronts to gather dust. Now fears were fading. But no one knew what lay ahead on this late-June day as owners raised the gates at jewelry stores, tandoori restaurants and bridal shops clustered near Roosevelt Avenue’s elevated train line. Overnight, the stress had woken Shekhar nine times.

“You cannot tell everybody it’s safe to come and buy from us. This is an invisible enemy that nobody can see,” said Shekhar, a father of two anxious about the shop’s $6,000 monthly rent. “This is my baby,” he said, of the store, Shopno Fashion. “I have worked hard for this for more than 20 years, then I got my shop. It’s not easy to leave it.”

Amid the deaths of friends and customers, Shekhar is reluctant to complain. And he knows he is not alone. As economies around the world reopen, legions of small businesses that help define and sustain neighborhoods are struggling.

The stakes for their survival are high: The U.N. estimates that businesses with fewer than 250 workers account for two-thirds of employment worldwide.

EDITOR’S NOTE — Small businesses around the world are fighting for survival amid the economic fallout from the coronavirus pandemic. Whether they make it will affect not just local economies but the fabric of communities. Associated Press journalists tell their stories in the series “Small Business Struggles.

Over the years, Stephanie Skoglund invested countless hours of sweat equity renovating what was once Tenino, Washington’s general store — replacing the floors, wiring chandeliers, adding a kitchen in the old sandstone building in this long-ago frontier town for use as a wedding hall.

With this year’s wedding season approaching, 40 celebrations were already on the calendar at The Vault and its sister facility. Then the coronavirus hit.

Skoglund turned off the electric circuits and water lines at both venues. She sold a dance floor for $1,000 and a large party tent for $2,600, to help cover her family’s bills. Her husband works for her business, so his income is gone, too.

Skoglund was approved for $3,200 of the nearly $25,000 she sought from the federal Payroll Protection Program before learning that wouldn’t be coming. Then Washington state halted her unemployment payments as it scrambled to sort out hundreds of millions of dollars in fraudulent claims.

Reopening has proved just as tough.

In June, Skoglund started getting calls from people looking to rent tables, chairs and tents for outdoor events, her only revenue so far. She’ll host her first wedding in late July, one of three events that remain on the calendar. The hall can seat 299, so with 80 guests expected social distancing rules should not be an issue.

Of 20 couples who had booked weddings through October, eight rescheduled for next year and a dozen canceled. Skoglund wrote letters to say she hopes to refund them eventually; it wouldn’t feel right to keep deposits, regardless of language in the contracts.

Skoglund is hoping business solidifies by October. But she and her husband have talked about selling their home and businesses and starting over, if it doesn’t.

“I have to start thinking about how to save what I do have and not put myself in a financial position where I lose it,” she said. “Just making that decision: what’s my next step? That’s what keeps me up at night.”

— By Gene Johnson in Tenino, Washington

The blossom-filled store, in a Tokyo neighborhood bordered by the Sumida River, quickly lost its business making arrangements for restaurant openings and job promotions. Tourists disappeared. The area, adjacent to the Athletes Village built for the Tokyo Olympics, had been expecting a boom, only to see it fizzle when the games were postponed.

Hirano placed colored tape on the floor to encourage social distancing. As pandemic fears soared, he found an audience.

“People were working from home and wanted to cheer themselves up,” said Hirano, who estimates 100 customers a day came to the shop. “Some people said they can forget the coronavirus when they come in our store. Flowers can give energy to people.”

On June 19, Hirano pulled the tape from the shop’s floor, while leaving warning signs up. Officially, the emergency was over, but the challenges continue.

One of the first bouquets he sold in the days afterward was to a customer marking the closing of a nearby restaurant. As other businesses reopen, some have ordered flowers to celebrate. Still, total sales have dropped by up to 20%.

Hirano, though, is consistent, returning to the store each day, bowing to customers, donning his favorite New York Yankees cap. Flowers are what he loves, he said.

“As long as you have a store, you have to keep it open,” he said. “I never for a moment thought of closing it.”

— By Yuri Kageyama in Tokyo

Almost as soon as the pandemic forced Ali Barbarawi to close his Minneapolis dental practice, he began laying a path to reopening.

Experts deemed dental offices as high risks for transmitting infection. So Barbarawi went online to speak with patients of his Chicago Lake Family Dental practice, limiting in-person visits to those with emergencies.

In the meantime, he installed plexiglass shields to limit the potential for airborne spread. He replaced the office carpet with hard flooring to make it easier to sanitize. And he ordered masks, face shields and gowns for staff at the office a block north of Lake Street, a commercial corridor spanning south Minneapolis that has long been home to scores of immigrant- and minority-owned businesses.

When Minnesota officials announced the lifting of some restrictions, Barbarawi made plans for a June 1 reopening. Then, with just a few days to go, protests over the killing of George Floyd spread through the neighborhood.

Sitting at home, eyeing the office security camera on his cellphone, he watched as people broke into the practice and destroyed his equipment. Soon after police told him they would be unable to respond to the scene, he saw the building go up in flames.

Barbarawi said, at most, insurance will cover half of what he’ll need to rebuild. He started a GoFundMe campaign to help bridge the gap.

— By Mohamed Ibrahim in Minneapolis

In 15 years as a bookseller in east London, Jane Howe never saw the need for a website.

On weekends, shoppers packed the tidy Broadway Bookshop with more often waiting outside, drawn by the store’s personalized service.

“I love talking to people (about) what they read and what I read, and swap ideas,” Howe said. “I think of it as a dinner table and I lay everything out, these delicious dishes for people to take and try ... It’s going to be very difficult to replace online.”

The coronavirus didn’t leave her much choice.

With foot traffic on the Broadway Market way down and distancing rules in place, Howe decided it made little sense to reopen to customers. She let go of three part-time staffers, tried to negotiate a rent reduction, and borrowed 50,000 pounds from the government.

“If the business fails, how am I going to pay it back? It’s a dicey situation,” she said.

In mid-June, she launched a website, trying to replicate the interaction that made the brick-and-mortar store special. Loyal customers have been placing orders. Still, in the first week, the site took in just 28% of what the store netted before the pandemic.

Howe, who had been planning to retire in a few years, reminds herself that she’s a newbie at online commerce. In early July, she began selling books from the store’s doorstep, without letting customers inside.

“I’m going to give it my best shot for the next 18 months and then I don’t know what will happen after that if we don’t break even,” she said. “I’m hoping we come out of this in a year’s time…all I can do is hope we will.”

— By Sylvia Hui in London