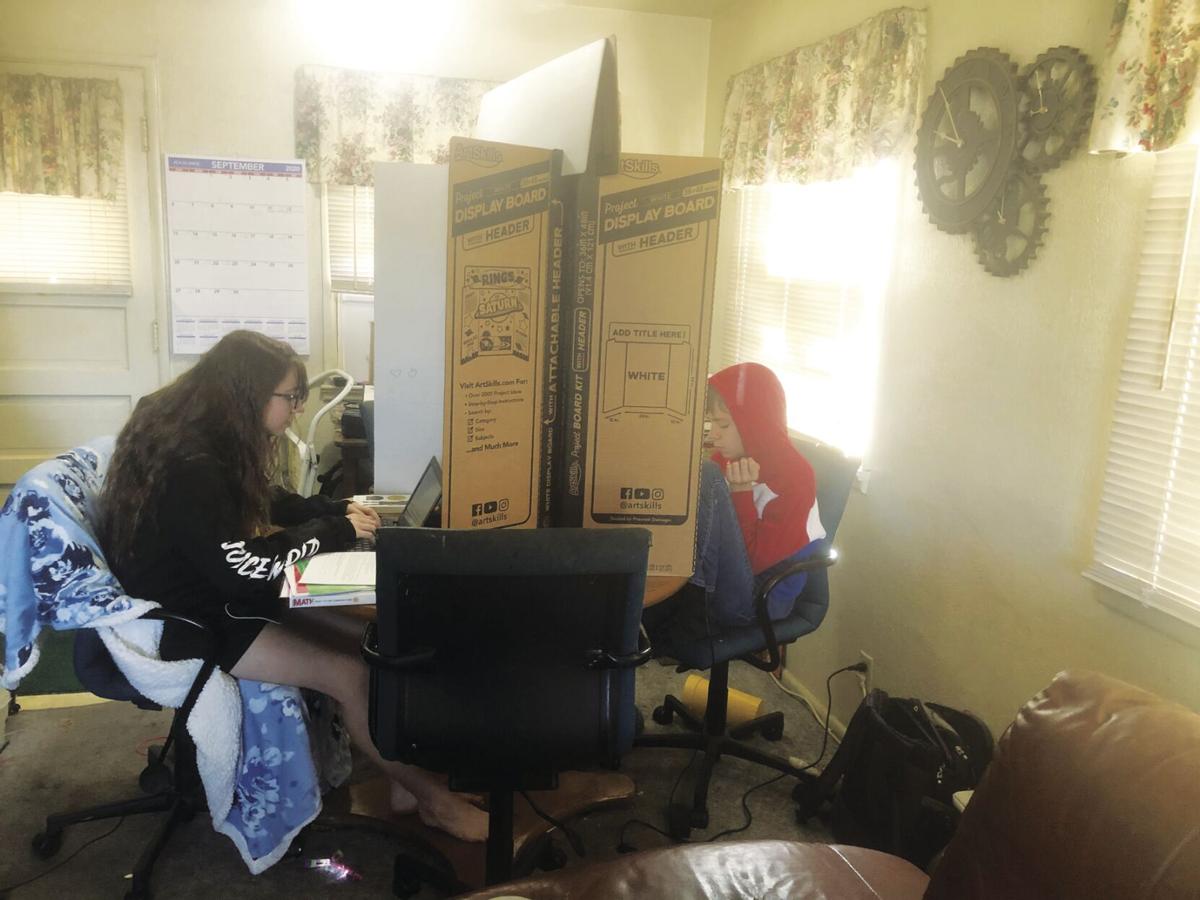 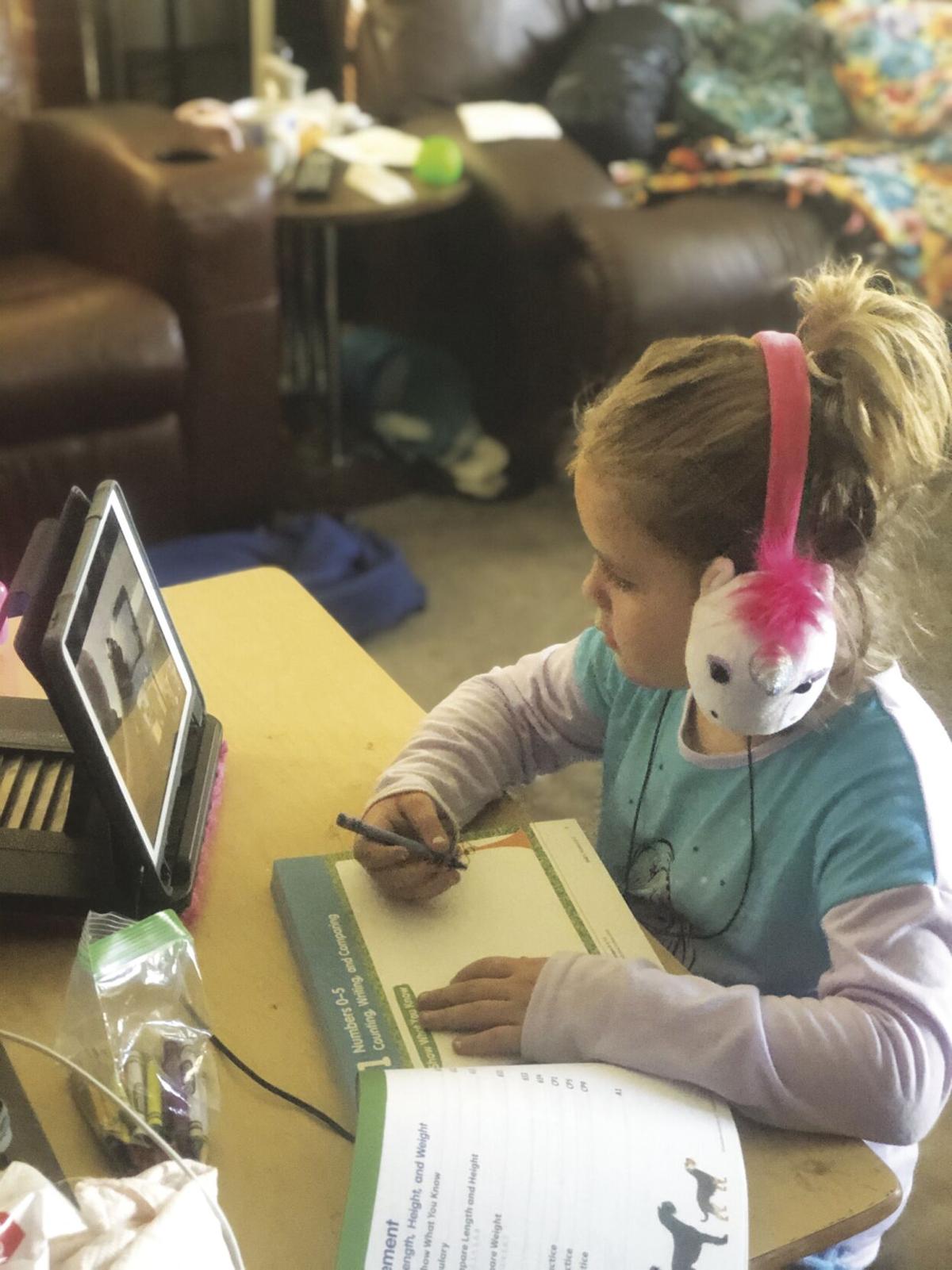 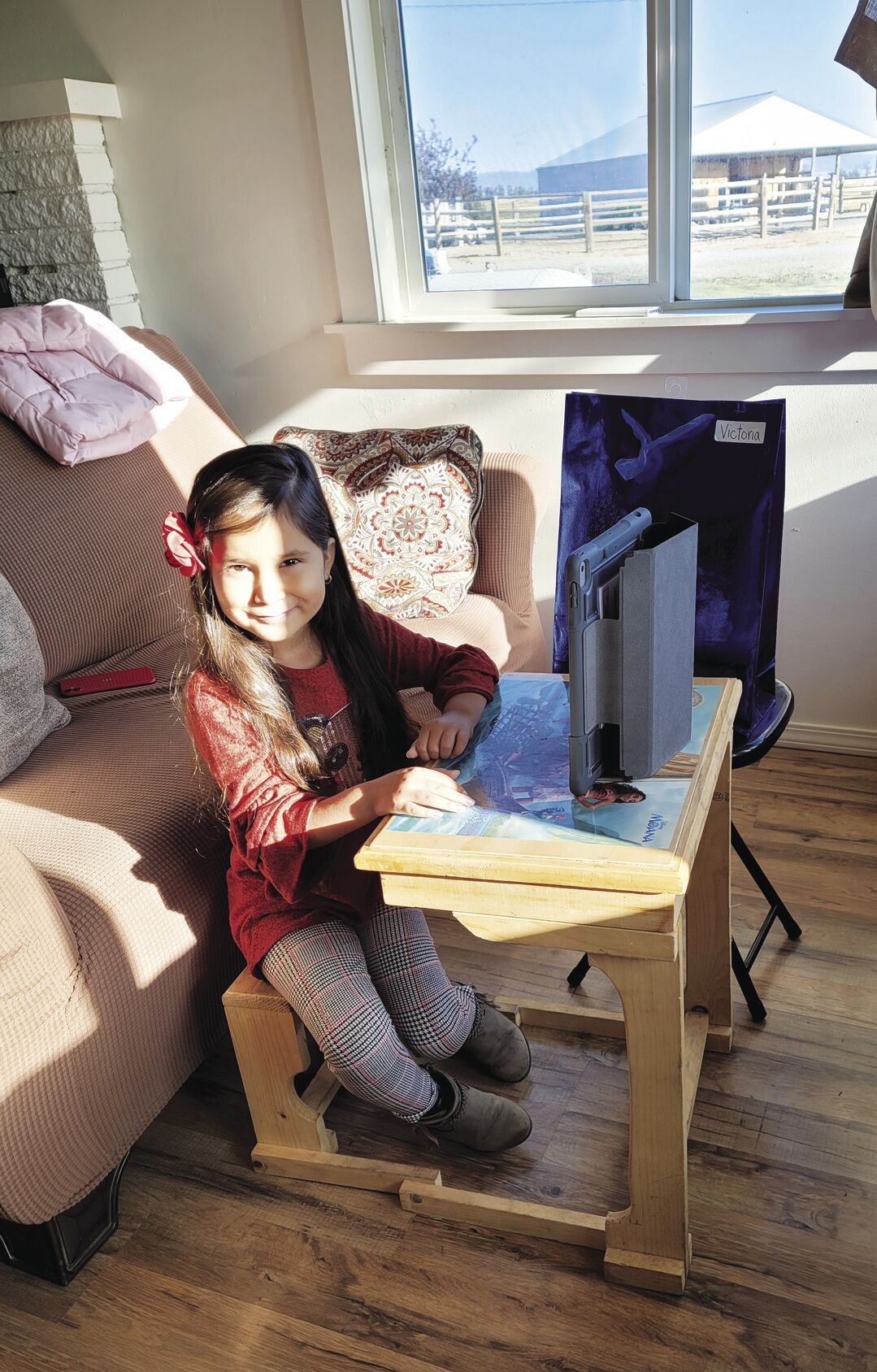 Victoria Loza had her first day of pre-kindergarten Tuesday. 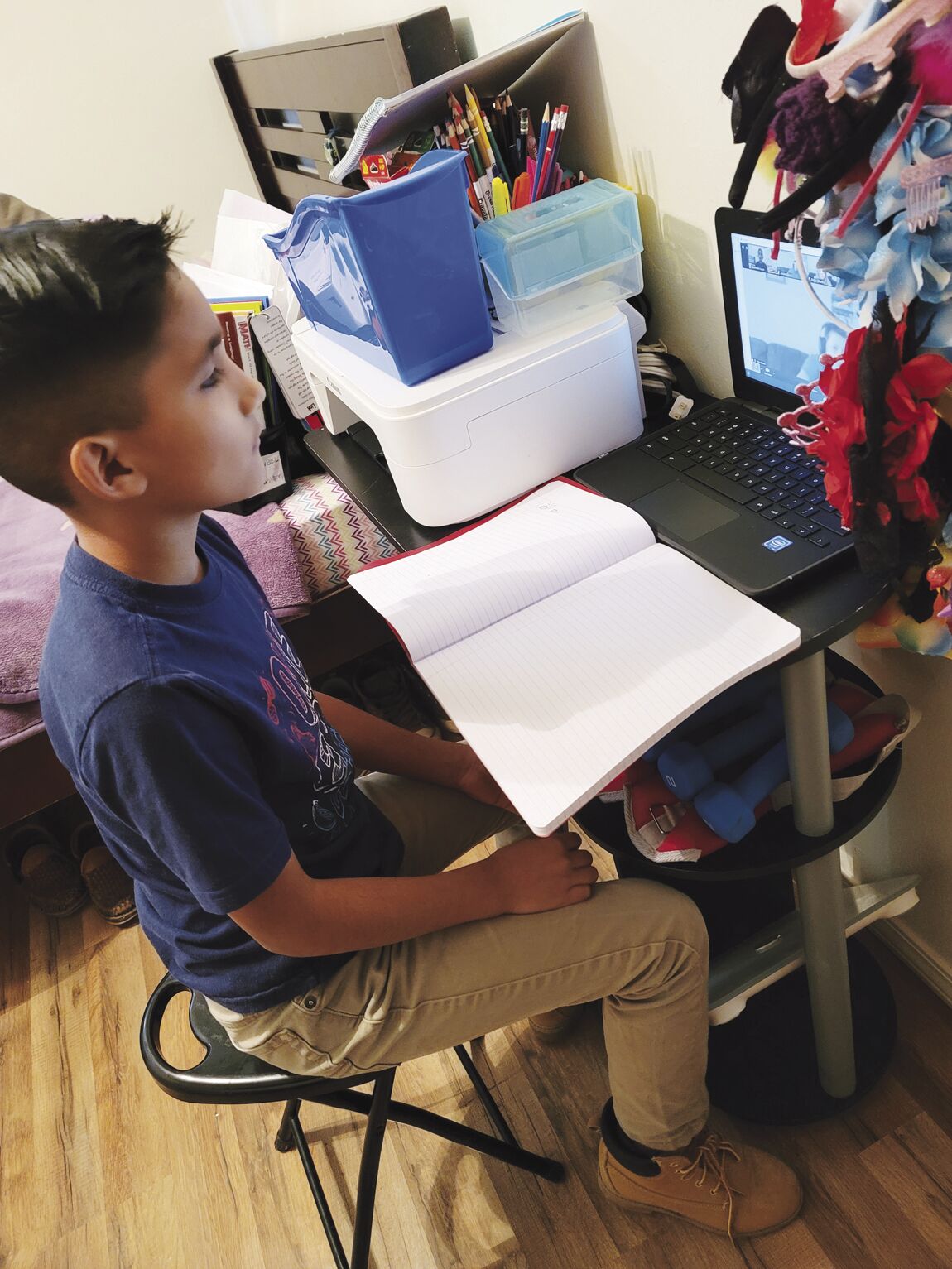 Bernardo Loza had his first day of online classes Tuesday. Bernardo is a fourth-grader.

With her five children, ranging from pre-kindergartner Victoria Loza to sophomore Geovanny Loza, attending classes online, Gissel had to make adjustments to the family’s home near Haines as the school year started in an unconventional way due to the coronavirus pandemic.

But even though having five students, each watching a separate computer screen and all sitting at the same table initially, sounds chaotic, Gissel said she was pleased by how smoothly Tuesday proceeded.

“It’s overwhelming at first,” Gissel said with a chuckle during a phone interview Tuesday afternoon.

At one point she was trying to simultaneously help two of her children who couldn’t sign in to their classes.

And although Gissel was gratified for the Wi-Fi hot spot device that the Baker School District provided to accelerate her sluggish internet connection, with five laptops humming away the bandwidth was stretched, figuratively speaking.

“There was some blurriness,” she said.

The five students aren’t all online at the same time throughout the day, fortunately.

Geovanny and his younger brother, Leonardo, who is an eighth-grader, have a longer schedule, with classes extending into the afternoon.

Ricardo, who’s a sixth-grader, along with Bernardo, a fourth-grader, and Victoria, have morning classes.

“I think they did pretty good concentrating,” Gissel said of her children. “They don’t get distracted. For the first day I think it went pretty well.”

After starting classes at the same table, the Loza children dispersed around the house later in the day.

Gissel, whose children also took online classes this spring, when the pandemic prompted the Baker School District to make a rapid switch to distance learning, said the new system the District bought with $600,000 in federal COVID-19 aid is a clear improvement.

“I think it’s way better than in the spring,” she said.

Gissel said she feels fortunate to have a couple of weeks to help her kids adjust to online classes before she goes to work during the potato harvest.

Although she is optimistic that her children will thrive with their remote classes, Gissel said they are eager to return to their real classrooms.

“We live out in the country and they don’t have any neighbors to play with so they’re really wanting to go back to school,” she said. “They feel really lonely.”

Heather Matheny faced similar challenges Tuesday morning as her two daughters, Nikki Williams, an eighth-grader, and Aryana Leos, a kindergartner, logged in with their computers along with their brother, Isaac Williams, a seventh-grader.

Nikki and Isaac are using Chromebooks provided by the Baker School District, while Aryana has a tablet.

The middle schoolers are sharing a table, but Matheny, inspired by a friend from North Carolina, bought a pair of tri-fold dividers, 3 feet wide by 4 feet high, to create an individual space for both Nikki and Isaac.

The dividers also serve as bulletin boards where they can tape their class schedules and other items as they watch and listen to their teachers.

Matheny said Nikki and Isaac had a couple of technological glitches early Tuesday, “which we expected,” she said.

Matheny said she was on the phone with the middle school trying to fix the problem while also helping Aryana with her kindergarten lessons.

“The rest of the day was successful,” Matheny said.

Aryana had no computer issues during her roughly three-hour session Tuesday morning.

Matheny said Aryana has attention deficit disorder so it can be challenging for her to sit still and concentrate for a long period.

The periodic breaks built into the schedules are welcome, she said.

All three of her kids had breaks at the same time, and they went outside to play and get some fresh air before returning to their screens.

Matheny said she opted to have Aryana take classes in the morning since her older siblings would also be starting their lessons early.

Matheny said she was pleased to see that Aryana stayed attentive to her class despite the interruption caused by the glitch with Nikki’s and Isaac’s classes.

“She followed along with what everyone else was doing,” Matheny said of her kindergartner. “I think she did fairly well.”

“I really think things are running a lot smoother than they were in the spring,” she said. “Things were so chaotic in the spring.”

Matheny said Aryana will start taking 2 hours of in-person special education classes next week, but continue with online learning the rest of the time.

Matheny said she welcomes the return of regular in-person classes “as soon as it’s safe for my kids to go back.”

Baker School District students aren’t the only ones who have had a non-traditional first day of school this summer.

Cindy Flynn’s grandson, Daniel Irwin, started third grade at the Seventh-day Adventist Christian School in Baker City on Aug. 24. The private school is also conducting online classes for now due to the pandemic.

“Life has totally changed for us,” Flynn wrote in an email to the Herald. “It was a bit of a stressful day for us. It was a new school, a new way of doing things (learning a new way of uploading finished assignments), and Daniel really struggles with why he has to do school all day from home.”

Flynn said it’s fortunate that Daniel’s dad and stepmother, John and Kayla LaMiller, are available to help him.

“If we did not have this option, I’m afraid that I may need to quit my job, work part time or evenings,” Flynn wrote. “I have changed my schedule to be able to spend more days in a row with him.”