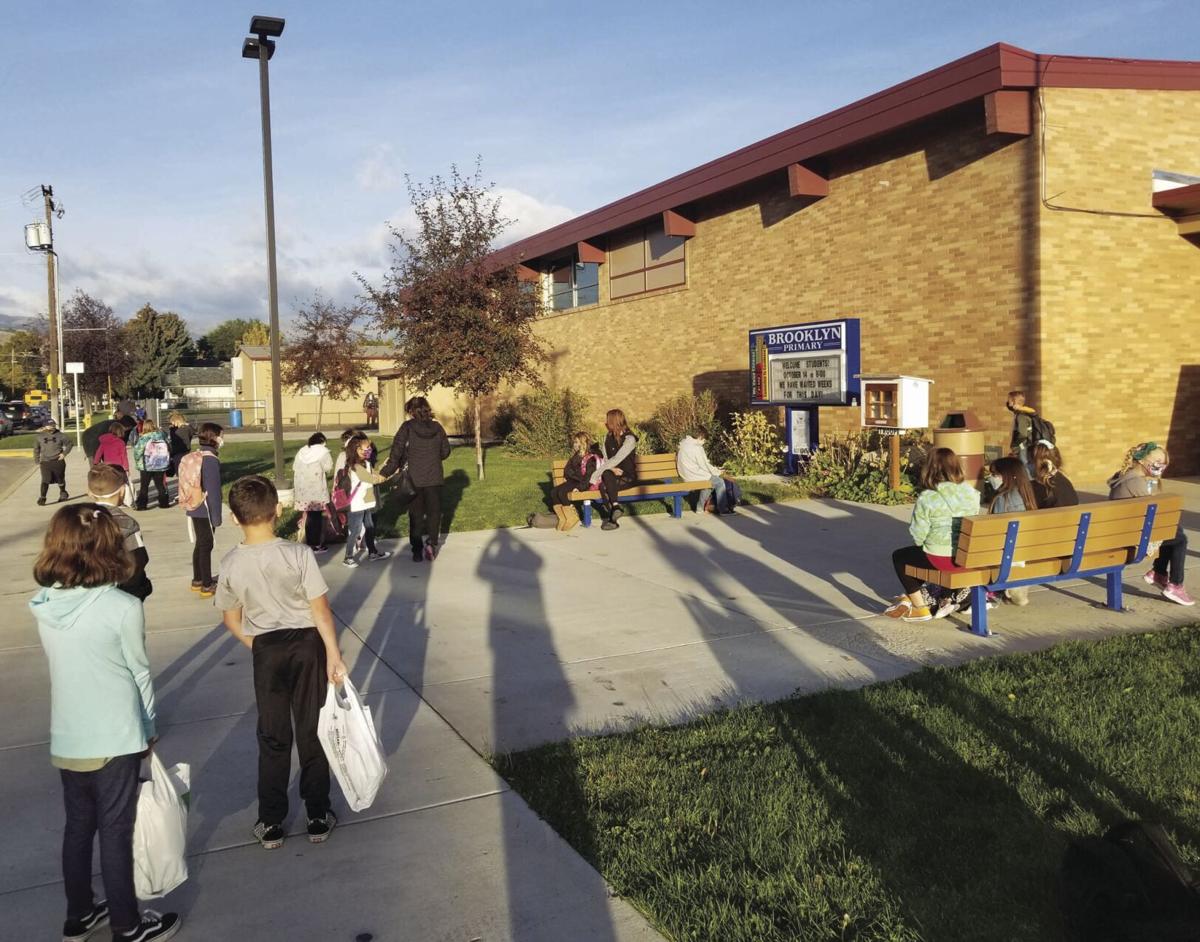 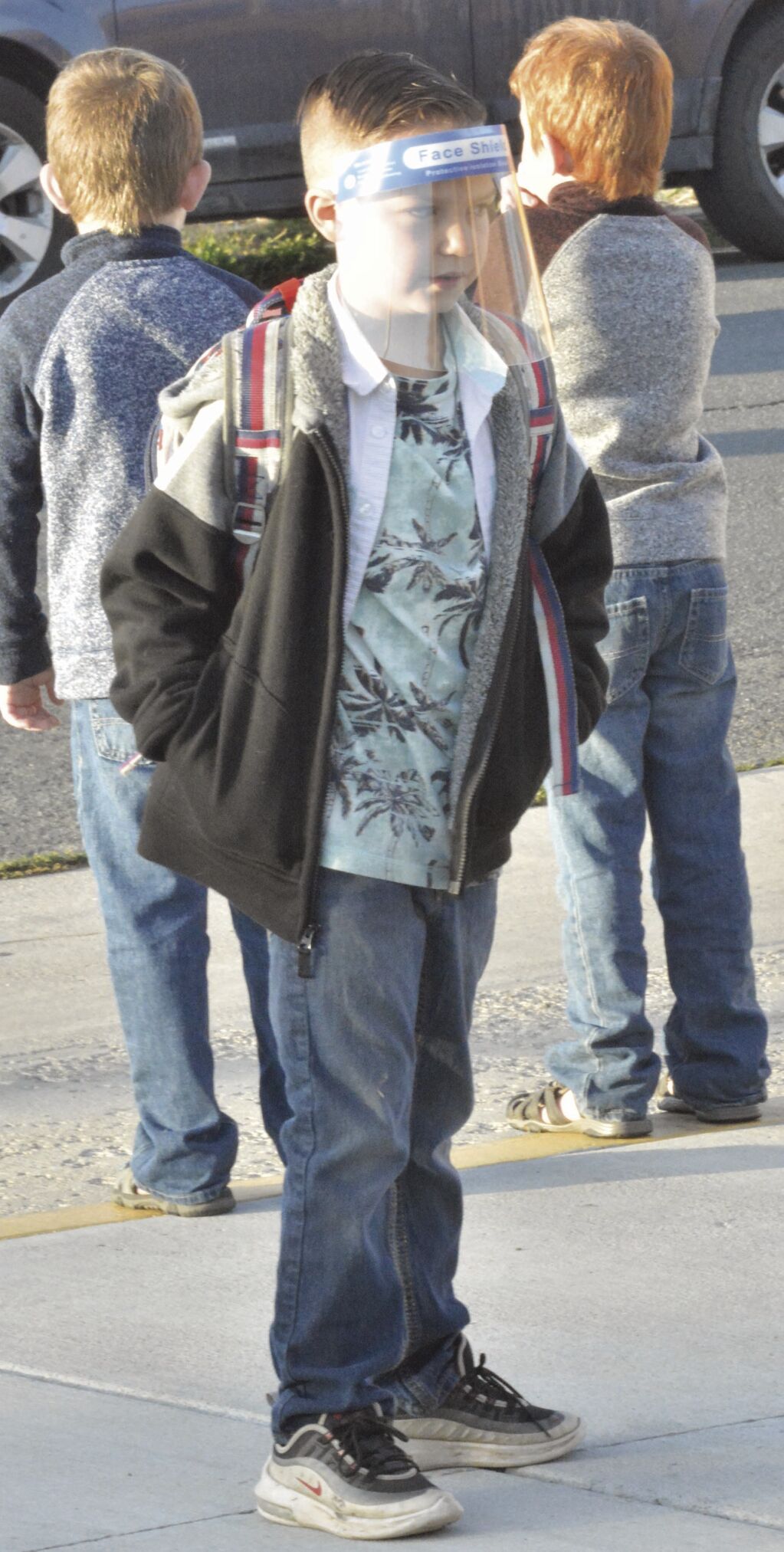 Gehrig Rayl, center, a third-grader at Brooklyn Primary, waits for the doors to open Wednesday morning. 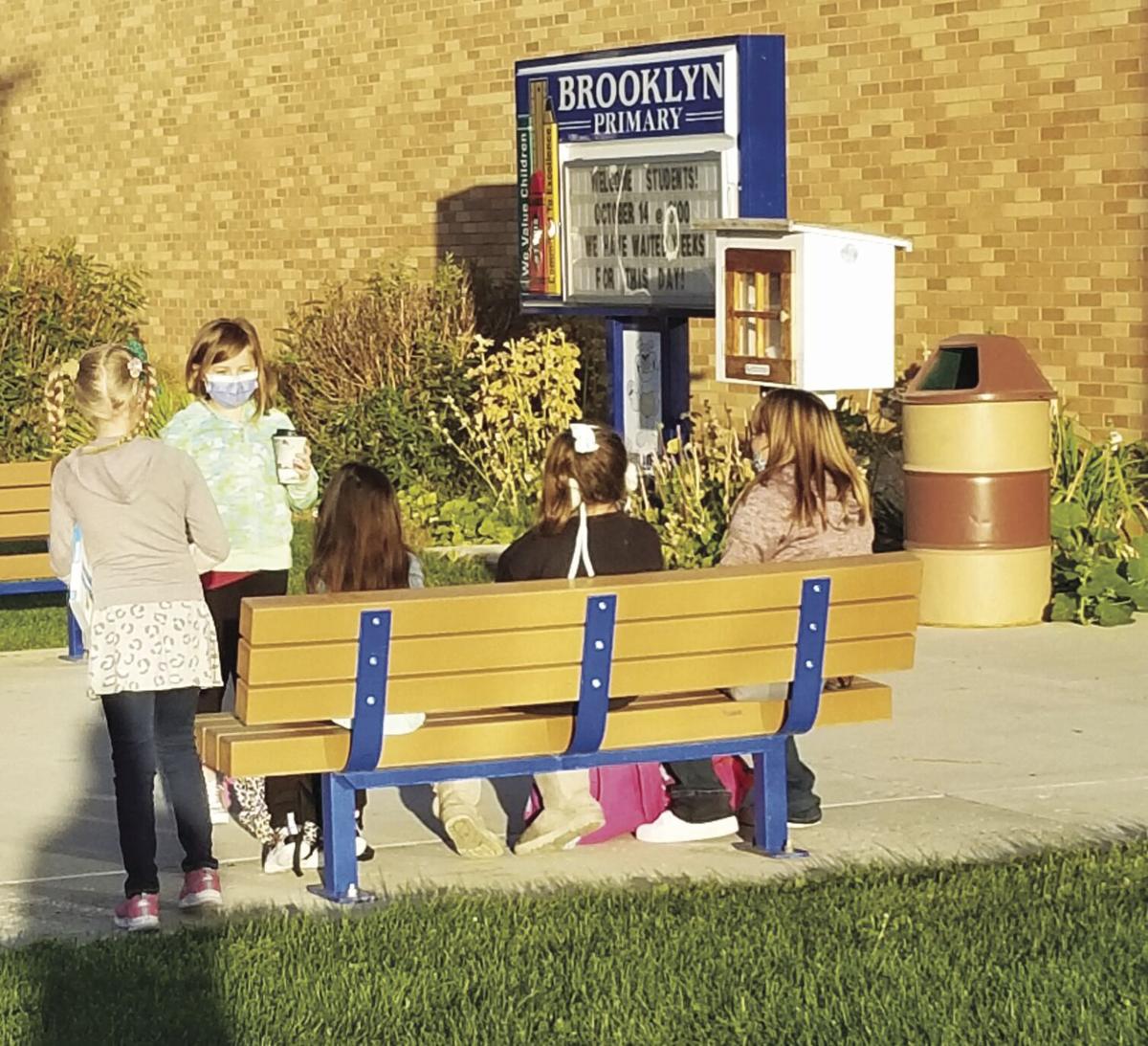 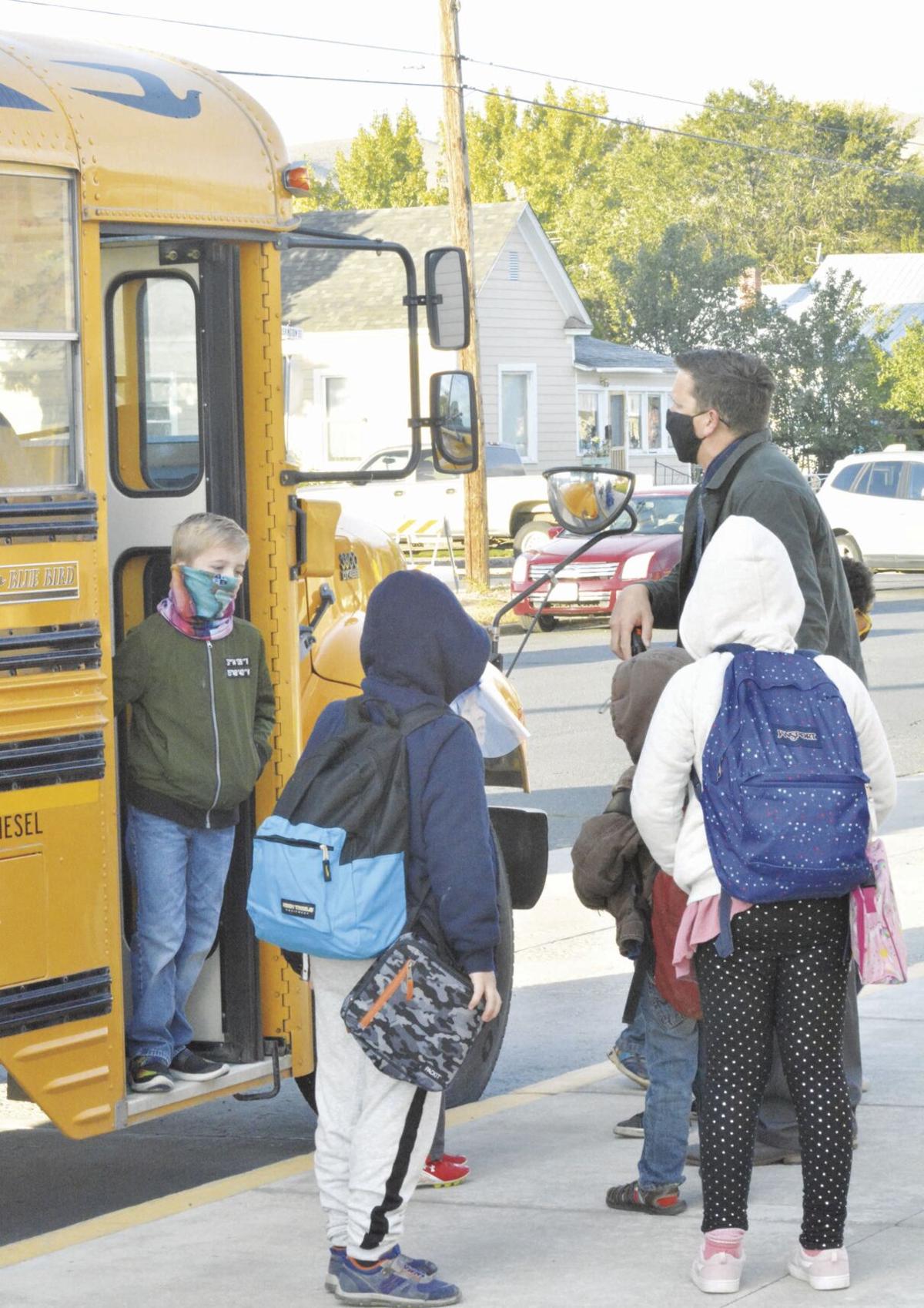 Buell Gonzales Jr., at right with black face mask, the dean of students at Brooklyn Primary School, helped students arriving on buses go to the entrance for their grade Wednesday morning. 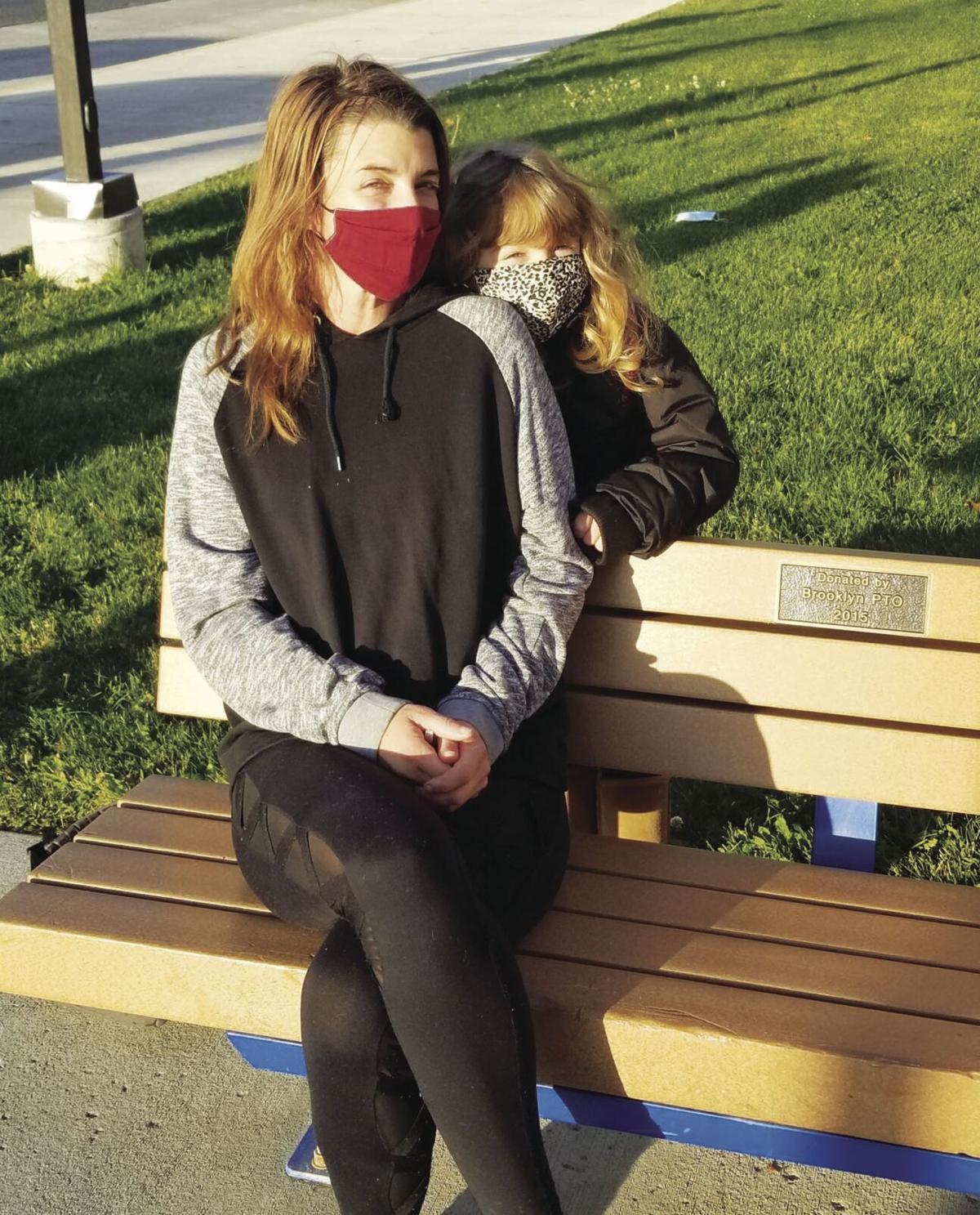 Leelah Wallace was so excited about her first day of first grade Wednesday — the real first day — that she could hardly bear to sit beside her mother, Erica, on a bench just outside Brooklyn Primary School.

Leelah, who’s 6, hopped off the bench and scurried behind it, looking toward the school’s front door.

Asked whether she was ready for her first in-person class in 7 months, Leelah’s enthusiastic answer didn’t lose a decibel despite her cheetah-print face mask.

Not that she was content with a single-word response.

Leelah launched into the sort of jubilant monologue that is the sole province of kids whose age is still one digit.

She covered topics including her teacher — Mrs. Robertson — and a recently completed drawing that Leelah is especially proud of.

“She’s really excited,” Erica said with the smile of a mom who knows no adjective is quite capable of capturing the spirit of a 6-year-old.

Erica shared her daughter’s attitude about the resumption of in-person classes.

But even though Erica believes the new online system the Baker School District bought during the summer with $600,000 in federal COVID-19 aid is a significant improvement compared to the spring, when the district had just a couple of weeks to set up online classes, she is pleased that Leelah will be seeing her teacher in person rather than on a computer monitor.

In a year that has been anything but, it was a normal, which is to say hectic, scene outside Brooklyn.

Students scampered along the sidewalk, chattering with each other.

Buses rolled to a stop at the curb, disgorging their cargo of kids with bright-colored coats and tousled hair.

Parents waved goodbye to their children, the once-familiar routine interrupted by the pandemic.

Buell Gonzales Jr., Brooklyn’s dean of students, and other staff members rushed about, escorting students to their respective entrances.

Each grade — first, second and third, as kindergartners have moved to the new Baker Early Learning Center — will enter Brooklyn at a different door, where they will have their temperature checked before they walk to their classrooms.

That wasn’t the only indication that this first day wasn’t like any other.

A scrim of frost spangled the grass, something not typical at the customary start of a school year in late August or early September.

And of course there were the masks.

All students and staff are required to wear face coverings.

That was the one aspect of her first day that bothered Leelah — although she was still smiling even as she said “I don’t like the mask.”

Nathan Rayl’s son, Gehrig, an 8-year-old third-grader, was wearing a plastic face shield as he walked across Washington Avenue with his dad.

A disdain for masks isn’t the only thing Gehrig has in common with Leelah.

“He’s definitely excited,” Nathan said of his son’s reaction to waking up for his first day of in-person classes since March.

Nathan said he thinks online classes are a meager substitute for regular school, although he said Gehrig did well with remote learning.

“I’m excited for him to go back to school,” Nathan said. “That one-on-one interaction with a teacher is so important. I think all kids will benefit from that. Kids need structure, and they need to socialize.”

After dropping off his son, third-grader Bronson, 8, Juan said he is grateful that both his son and his daughter Alsitie, a sixth-grader at South Baker Intermediate, returned to in-person classes Wednesday.

“He was excited,” Juan said of his son. “Three hours of online schooling is not enough for these kids. They’re sponges right now. They need as much school as they can get.”

Juan said he is not overly concerned about the health risks of resuming classes during the pandemic.

Neither is Erica Wallace.

“I feel confident that the school is going to keep them safe,” she said.

Nathan said his only concern is that an outbreak of the coronavirus could force schools to revert to online education.

“Three hours of online schooling is not enough.”

— Juan Elizondo, whose son, Bronson, is a third-grader at Brooklyn Primary School