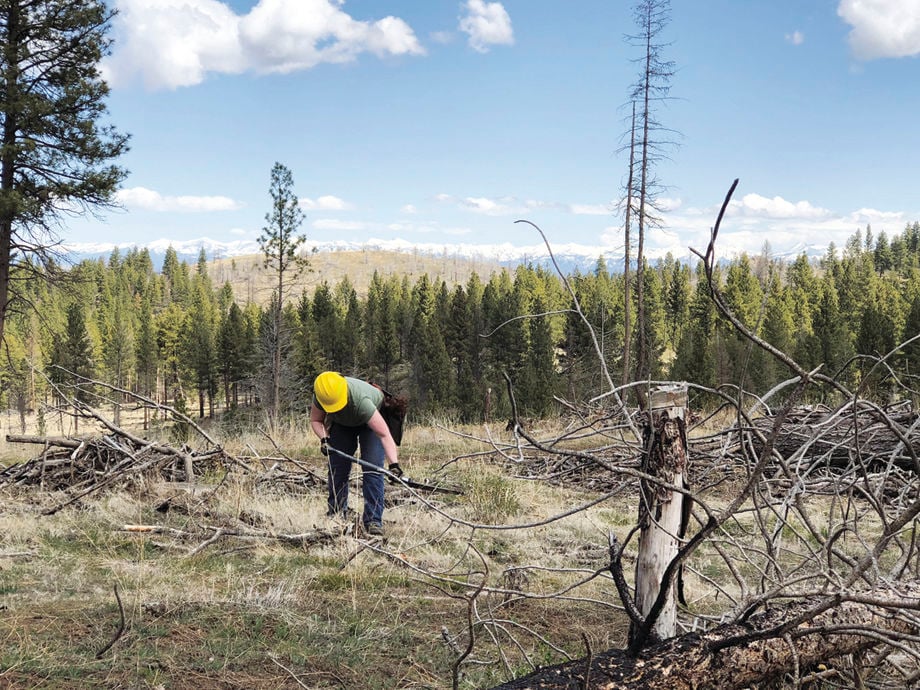 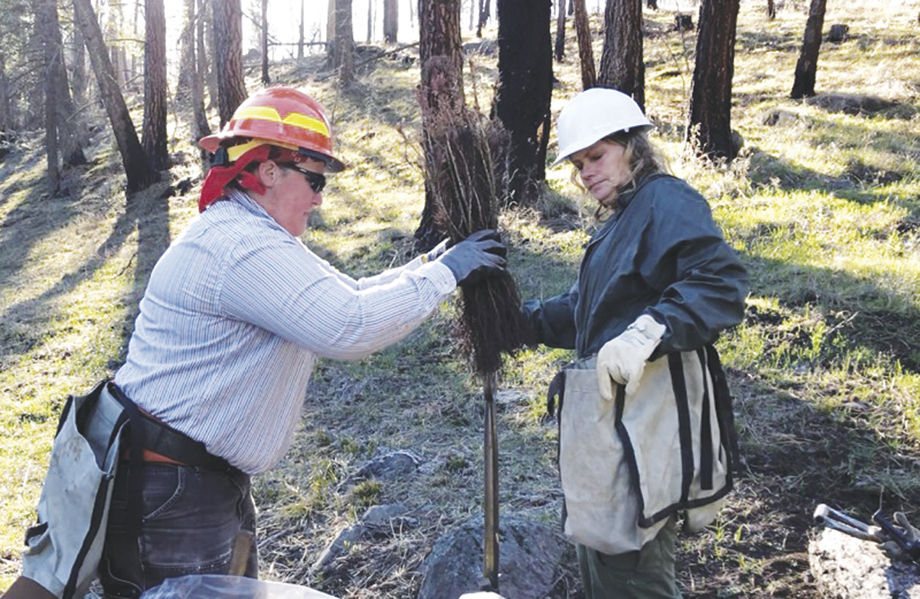 Annie Franks, left, a forestry technician at the BLM’s Baker Field Office, loads larch seedlings in a bag carried by Jennifer Theisen, geology archaeologist at the office. This is as close as the tree-planters get.

Annie Franks, left, a forestry technician at the BLM’s Baker Field Office, loads larch seedlings in a bag carried by Jennifer Theisen, geology archaeologist at the office. This is as close as the tree-planters get.

Annie Franks had a tree problem.

The trouble wasn’t the trees themselves.

The 30,000 tamarack (western larch) seedlings arrived at the BLM’s Baker Field Office as scheduled on April 8, packed in a refrigerated truck to protect their delicate bare roots.

Franks’ dilemma was that she didn’t have anybody to plant the trees on about 600 acres burned during the Cornet-Windy Ridge fire south of Baker City in August 2015.

The coronavirus pandemic was at the root of the situation.

Just a few hours after the truck delivered the tamarack seedlings, Franks, a forestry technician, learned that the BLM, which had planned to award a contract to a tree-planting contractor later that day, would not be doing so.

The BLM couldn’t guarantee housing, meals and other accommodations for the crew of 10 to 15 planters, said Larisa Bogardus, public affairs officer for the BLM’s Vale District.

In addition, Baker County officials had asked agencies to avoid bringing in large groups of contractors from outside the county during the pandemic, Bogardus said.

Bill Harvey, chairman of the Baker County Board of Commissioners, met with Don Gonzalez, Vale District manager, to discuss the tree-planting contract.

Harvey said Wednesday that the BLM was “very accommodating” in granting the county’s request to avoid bringing in contractors.

Because the tamarack seedlings had been uprooted, they couldn’t be returned to the U.S. Forest Service’s J Herbert Stone Nursery at Central Point, near Medford, where they were grown from seed, Franks said.

If BLM officials couldn’t figure out how to plant the trees, they would go to waste.

A much larger shipment of seedlings — 150,000 trees, mostly ponderosa pines and some Douglas-firs — was also slated to be planted in the burned area this spring.

Franks said those seedlings were grown at a nursery in Hood River, and the BLM was able to cancel the shipment.

Rather than concede defeat, Franks immediately started assembling an emergency tree-planting crew from among her BLM colleagues, few of whom are accustomed to wielding the hoedad, the long-bladed tool that is the tree-planter’s chief implement.

She invited employees from other departments to plant trees.

“We’re having a big planting party,” she said.

Less than two weeks later the first group of planters left Baker City with a load of tamaracks, tree bags and tools.

Their destination was the Cornet-Windy Ridge fire. That blaze, the combined combustion of two lightning-sparked fires that burned together, is the biggest in recorded history in Baker County, covering 104,000 acres of forest and rangeland on both sides of the Dooley Mountain Highway south of Baker City.

The fire scorched about 40,000 acres of public land managed by the BLM.

“We’ve had a lot of good help out there,” Franks said on Tuesday. “A real team effort.”

This is the fourth week of the campaign.

During the first three weeks the ad hoc crews planted about 15,500 seedlings, slightly more than half the total.

Planting trees is not light labor.

The job isn’t dissimilar from fighting wildfires — both tasks require hiking over rough terrain and swinging a tool hundreds of times a day.

Planting trees demands rather more precision than digging a fire line, though.

“There’s a lot to it besides just swinging a tool in the ground and tossing a tree in the hole,” Franks said.

Tree-planters have to ensure that each seedling’s bare roots fall vertically in the hole. If the hole isn’t deep enough and the roots end up curled — what planters call a “J-root” for that letter’s curved shape — the seedling is much less likely to survive, she said.

Franks said about 25 people have joined the planting crews, including BLM employees, longtime agency volunteers, and a few children of employees.

The roster includes BLM staff from the Vale District headquarters and the Baker Field Office who normally work in disciplines including firefighting, archaeology, realty, geology, recreation and office support.

Bogardus, who herself has taken a turn with a bag of seedlings slung over her shoulder, said the recent arrival of seasonal recreation employees has helped bolster the tree-planting effort.

Franks said she was realistic in her expectations, knowing that her hastily assembled crew could hardly match the speed of professional planters. She said the contract crew probably would have dispatched the complement of tamaracks in three to four days.

“I told everyone I don’t care how many trees you put in the ground, I just care that you’re safe,” Franks said. “Everybody’s done really well.”

Bogardus said the crews drive to the planting sites either alone or with two people per vehicle depending on its seating arrangement, to maintain social distancing. That’s easy to do out in the woods, since planters spread out to ensure an even distribution of seedlings, she said.

Because the BLM’s timber program is considered essential work, the agency has allowed employees to take on the tree-planting task as a temporary assignment, Bogardus said.

Although she suspects some local residents would be willing to assist, Bogardus said the BLM isn’t equipped to bring in groups of new volunteers. The ones who have helped with the tree planting are already registered with the agency, she said.

Franks said she remains optimistic that she’ll be able to get every seedling in the soil this month.

But the weather poses a challenge. Seedlings can be planted only so long as the soil is relatively moist and the air temperature isn’t too high, she said.

Bogardus said this is the second year in a three-year replanting program on the Cornet-Windy Ridge fire.

She said BLM officials are optimistic that the agency will be able to finish the job in the spring of 2021 — including planting the 150,000 ponderosa pine and Douglas-fir seedlings that were supposed to be planted this year.

Bogardus said the average cost to plant trees is about 30 cents per seedling.

I commend Annie Franks for rallying the troops on this project. I appreciate the work these Federal servants do for our Country. If not for Annie, I fear that others may have simply let the seedlings waste (along with tax payer dollars) and chalk the loss up to another defeat by Covid-19. But, Annie and her team's spirit as Americans and natural resource professionals showed the Covid-19 who is the Boss! I send my appreciation to this leader and her team of dedicated professionals and citizens. This is another strong example of the American spirit. No political divide here. Just getting the job done for Mother Nature.