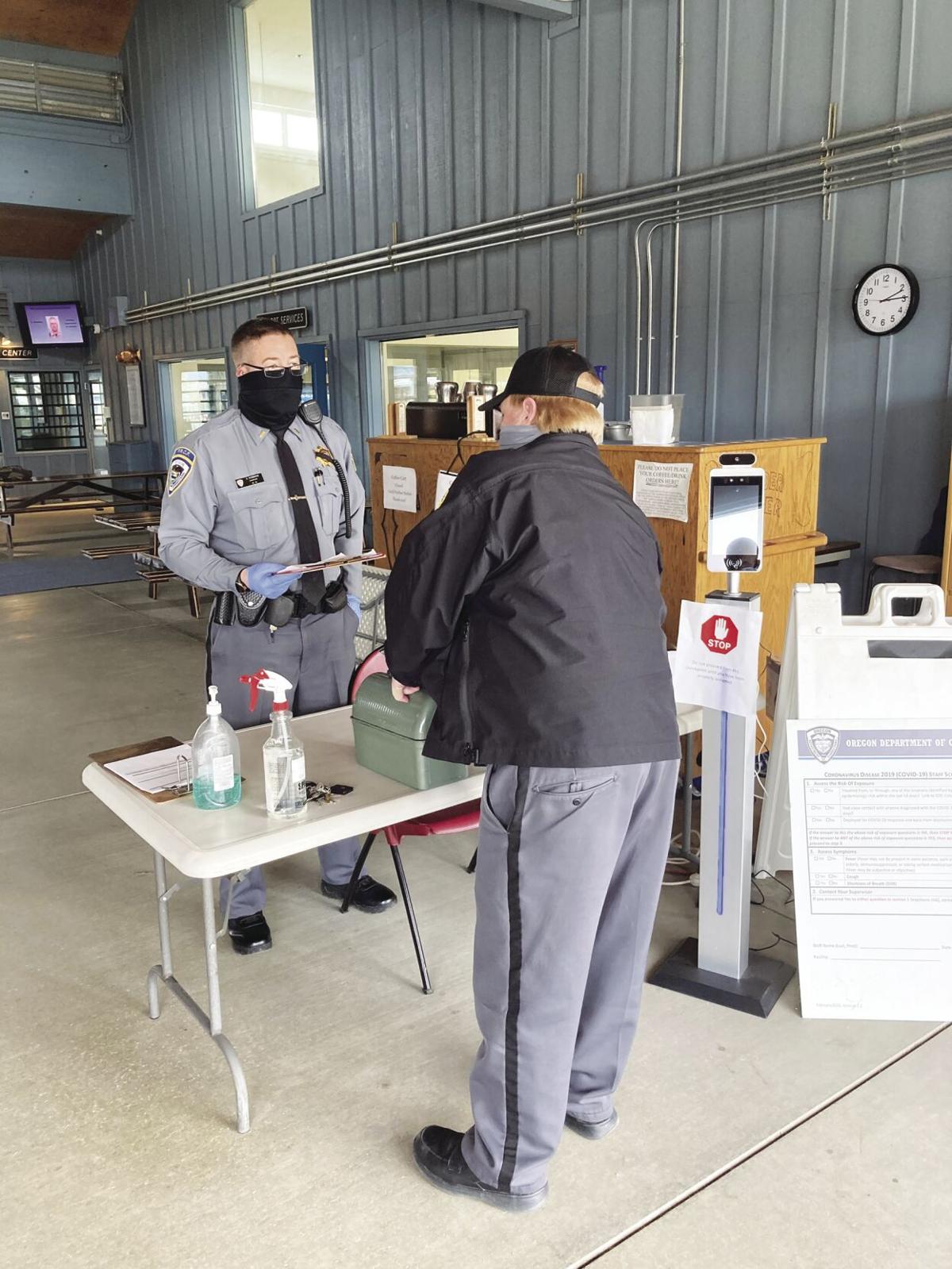 Everyone who enters the Powder River Correctional Facility has a temperature check and interview about recent contacts. 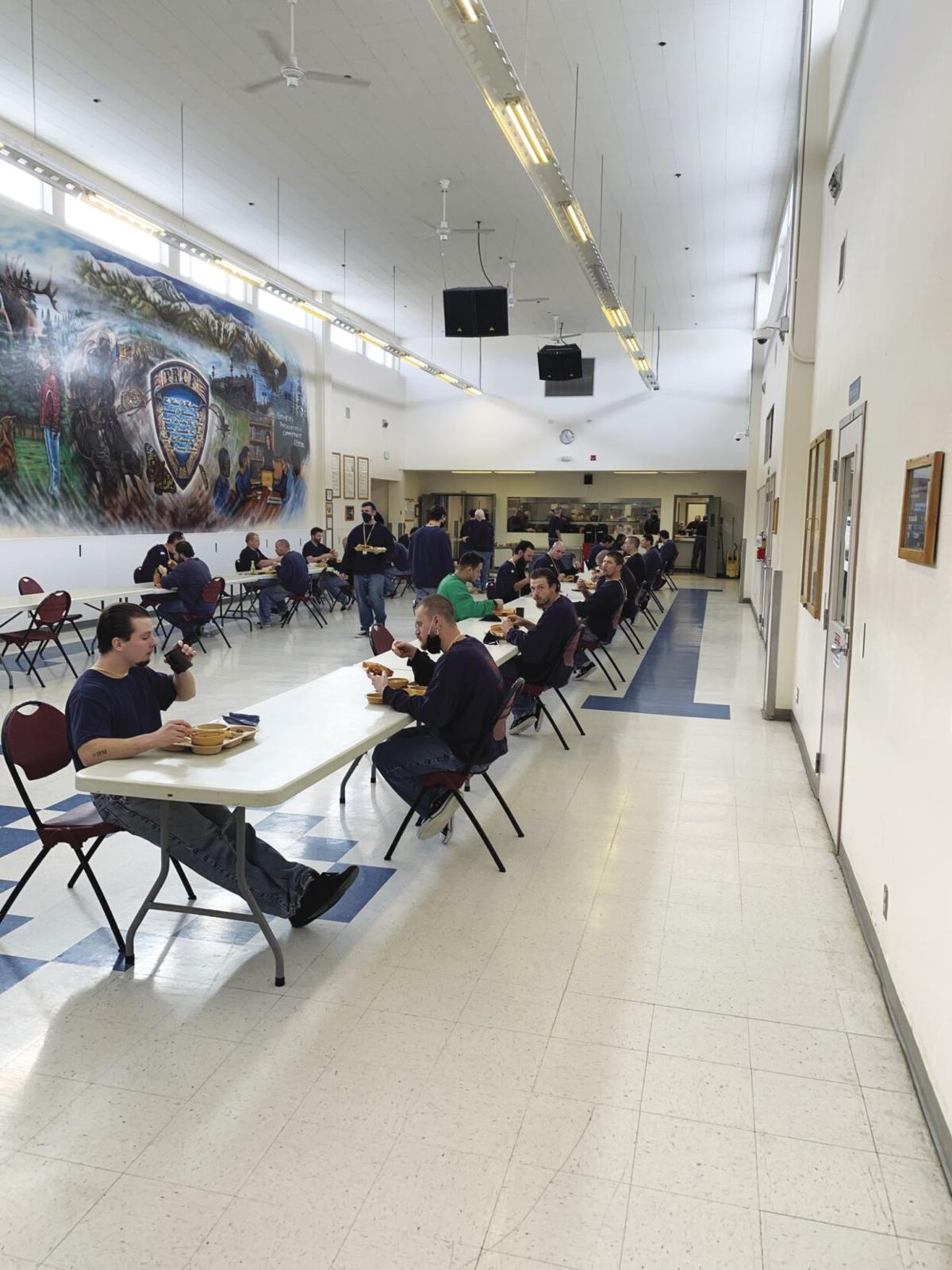 The dining hall at Powder River Correctional Facility has been altered to ensure adequate distance between inmates.

Everyone who enters the Powder River Correctional Facility has a temperature check and interview about recent contacts.

The dining hall at Powder River Correctional Facility has been altered to ensure adequate distance between inmates.

The COVID-19 outbreak at Powder River Correctional Facility in Baker City has slowed considerably over the past two weeks, and an official at the minimum-security prison said she’s pleased with the trend.

Powder River, which has recorded 65 cases among inmates since the first infection in mid-December, as well as 17 employees and 11 contractors, hasn’t had an inmate test positive since Jan. 20, said Debi Geddes, the prison’s correctional rehabilitation manager/administrative services manager.

“We’re super excited about that, and about potentially returning to more normal operations,” Geddes said on Thursday, Feb. 4.

Powder River, which avoided any infections among inmates for the first nine months of the pandemic, recorded its first positive case of an inmate on Dec. 13.

Since then about 25% of the prison’s inmates, and about 21% of employees, have tested positive.

“We knew that we were on borrowed time, but we kept (the virus) out as long as we did because of the precautions,” Geddes said.

That includes regular sanitizing of surfaces, temperature checks and preventing inmates in each of the prison’s three units from mingling with those from another unit, whether during meals, religious services or other events.

Because Powder River lacks 24-hour medical facilities, inmates who test positive are transferred within 24 hours to a prison that has around-the-clock medical care as well as an isolation unit, Geddes said.

Most Powder River inmates have been taken to Snake River Correctional Institution near Ontario, where they can be monitored until they’re no longer infectious, Geddes said.

She said that of the 65 Powder River inmates who tested positive, 61 have recovered and been returned to Powder River.

Three were paroled after recovering, and one inmate is at Snake River and will be paroled from there.

The 17 employees who tested positive have all recovered and returned to work, as have the 11 employees from New Directions Northwest, which runs the alcohol and drug treatment program at Powder River, Geddes said.

About 100 people work at Powder River, including 80 or so state employees and about 20 New Directions Northwest staff.

Vaccinations offered to inmates this week

Geddes said the approximately 210 inmates at Powder River will be offered a COVID-19 vaccine this week, probably starting Wednesday.

The Oregon Department of Corrections Health Services will administer the shots.

Although the state can’t require inmates to take the vaccine, Geddes said that based on her conversations with inmates, she expects most will agree to be inoculated.

“I would say that close to 90% of them want to be vaccinated,” she said. “We’re super hopeful that that’s what the case will be.”

Powder River staff, as well as some medically vulnerable inmates, have already been offered vaccinations, Geddes said. She didn’t have a percentage of how many employees have been vaccinated.

Even before the first inmate tested positive Dec. 13, Geddes said Powder River had made changes designed to stem the spread of COVID-19 should it enter the facility.

That includes requiring all people entering the prison, including staff, to have their temperature checked and to answer questions about any potential symptoms and recent potential contacts with a person who tested positive.

Inmates have their temperature checked before each meal, and employees and inmates are required to wear face masks except when they’re eating, Geddes said.

The most obvious alteration to the daily schedule is in the dining hall, Geddes said.

No more than 60 inmates are allowed there, and the tables and chairs have been moved to maintain distance between inmates.

A crew of inmates is assigned each day to “sanitation duty,” including cleaning door handles and other frequently touched surfaces, Geddes said.

Inmates can request a COVID-19 test at any time, she said.

Geddes lauded the prison employees for their efforts during the pandemic.

“I can’t stress enough how amazing staff has been,” she said.