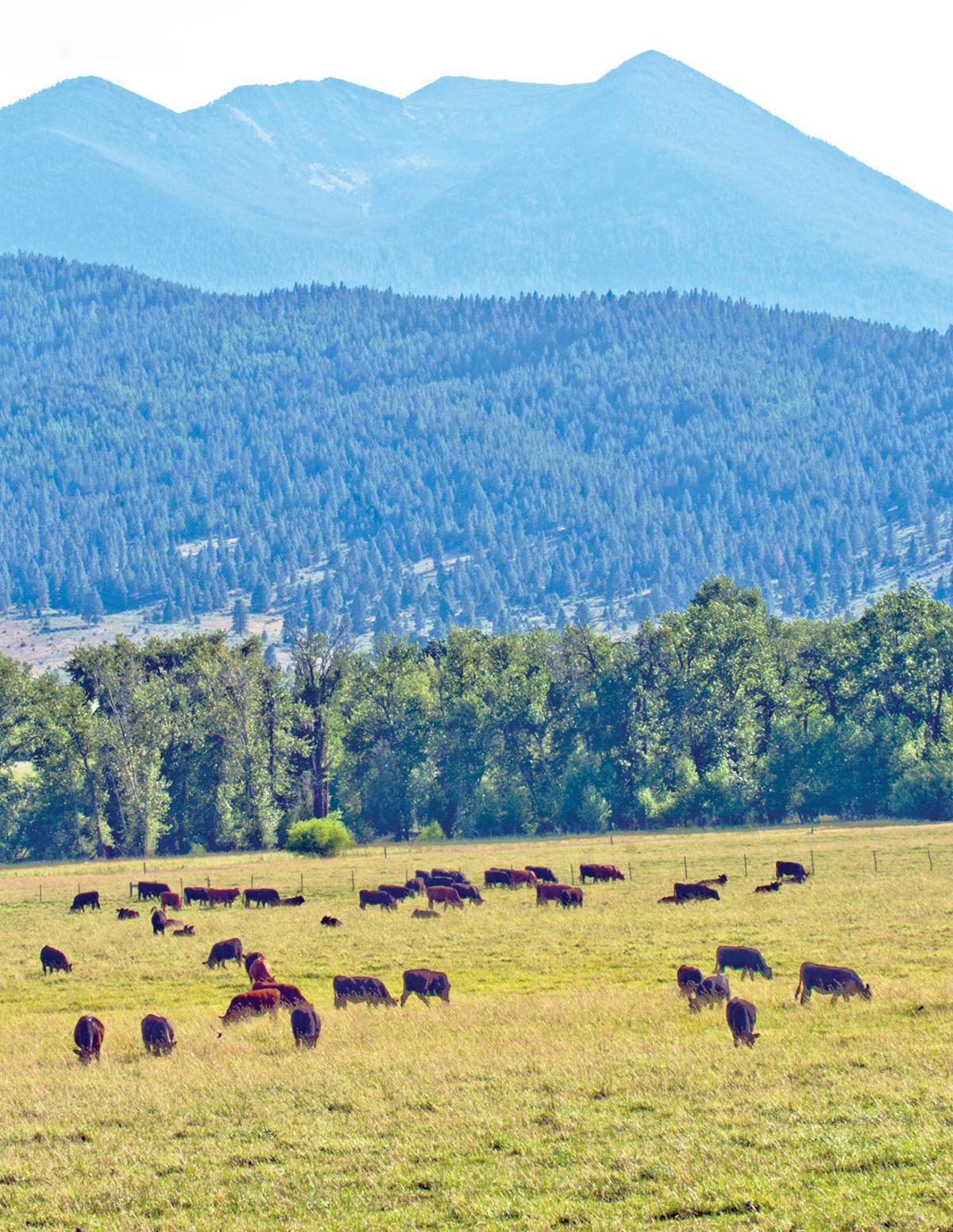 Sales of beef cattle totaled $45 million in Baker County in 2017.

Most Baker County ranches are cow-calf operations, selling each year’s crop of calves.

Sales of beef cattle totaled $45 million in Baker County in 2017.

Most Baker County ranches are cow-calf operations, selling each year’s crop of calves.

Suzan Ellis Jones and her husband, Keith, were hoping to sell their cattle herd this year and retire.

But with cattle prices plummeting during the coronavirus pandemic she’s not sure that will be possible for the couple, whose Devils Canyon Ranch is near Bridgeport in southern Baker County.

“Or should I say to give them away!” she wrote in a text.

Jones said prices for yearlings have dipped to around $1.20 per pound, lower than she’s seen in nearly two decades.

If prices remain that low, Jones said, she and her husband might not be able to afford to liquidate their cattle herd as they planned to do this year.

Ranchers can postpone selling cattle, hoping prices will rise, but that option is neither indefinite nor without cost.

Another Baker County rancher, Ralph Morgan, said he usually sells his annual crop of calves by video sale in July.

With prices plunging as low as $1 to $1.10 per pound for 500-pound calves, however, Morgan said he might be tempted to hold off until fall, or even potentially until next spring.

But that plan would amount to an “expensive gamble,” Morgan said, because he’d have to buy tons of hay to feed those cattle through the winter, with no guarantee that prices would rise enough to offset the additional, and unexpected, cost.

He said some ranchers might not be willing to take that risk despite current prices so low that, as Jones said, some animals would be sold for less than the rancher invested in them.

“Sometimes you’ve just got to pull the plug and do it and take your lumps,” Morgan said.

When cattle ranchers struggle in Baker County it has a ripple effect through the county’s economy.

Sales of beef cattle make up the biggest share of the county’s biggest economic sector — agriculture.

In 2017, the most recent year for which detailed figures are available from the U.S. Department of Agriculture, 363 ranches in Baker County sold almost 47,000 head of beef cattle worth $45 million.

A recent study commissioned by the National Cattlemen’s Beef Association estimated that cattle industry losses nationwide due to the pandemic will reach $13.6 billion — including $3.7 billion for cow-calf producers, the most common type of operation in Baker County.

The coronavirus has had multiple harmful effects on the cattle market, said Ron Rowan, director of risk management for Beef Northwest, a cattle-feeding company based in North Powder.

First, with schools closed nationwide and restaurants severely curtailed, demand for beef from the food service industry — which makes up about half of overall demand — has plummeted by about 80%, Rowan said.

Retail demand — people buying meat at grocery stores and other outlets — has increased at the same time, but overall demand has dropped, which has pushed prices down for live cattle, he said.

This is due in part to demand for different cuts of meat, Rowan said.

Restaurants, for instance, are major buyers of tenderloin and other more valuable cuts, while the retail market leans toward hamburger and other less valuable products. The difference is probably being exacerbated now because people have less disposable income, Rowan said.

Cattle prices dropped almost as soon as the pandemic began to spread in late winter.

Frederick Phillips, who has a cattle ranch in Keating Valley about 20 miles east of Baker City, said he sold some yearlings in January and received about a dime more per pound than at the same time the previous year.

But when he sold another group of yearlings in late February and early March, “we took quite a hit” as prices had dropped significantly.

Phillips doesn’t sell cattle in the fall, instead keeping animals on his feedlot through the winter.

That strategy is predicated on the cattle fetching a higher price after the winter — in effect, offsetting the cost of feeding the animals for several months.

But when prices dropped in late winter, Phillips said the money he spent feeding the cattle over the winter was in effect wasted.

“It’s kind of depressing,” he said.

The cattle market was still decent in some places as recently as March.

Dean Defrees, who has a cattle ranch in Sumpter Valley, said he sold some cattle in March and “they did fine.”

But prices have continued to plunge, and Defrees, who plans to sell more animals this summer, wonders what the market will look like then.

He said his family has been fortunate because they’re members of Country Natural Beef, a marketing group that has contracts for processing its members’ cattle at plants in Kuna, Idaho, and in Washington state.

Members are also in a relatively good position because only about 15% of Country Natural Beef’s products are sold to restaurants, with the rest going to the comparatively healthy retail sector, Defrees said.

So far, Country Natural Beef’s processing plants have been able to maintain production levels, he said.

But that’s not the case with many beef-packing plants in the region and nationwide, said Ron Currin, director of cattle procurement for Beef Northwest.

He cited as an example Tyson Foods’ plant at Wallula, Washington. The plant, which employs 1,400 people and processes more than 2,000 cattle per day, shut down last week after more than 90 workers tested positive for COVID-19.

Tyson is testing all plant workers for the coronavirus, and it’s not clear when the facility will reopen.

At least a dozen other meat packing plants in the U.S. — including ones that process hogs or chickens — have also closed due to workers being infected with the virus, according to the Food & Environment Reporting Network.

“The supply chain is broken,” Currin said. “Never in history has this happened.”

Currin and Rowan both believe the packing plant closures, most of which have happened during the past two weeks, are responsible for the continuing decline in cattle prices.

And they both believe that once the plants return to full capacity, prices should begin to rise.

That could be a gradual trend, however, because there will be a “backlog” of cattle to be sold and processed, Currin said.

That bottleneck could be harmful not only to ranchers, as they struggle to find buyers, but also for consumers in the form of a potential beef shortage, said Curtis Martin, who has a ranch near North Powder and is a past president of the Oregon Cattlemen’s Association.

Martin describes the situation as “a vast array of chaos.”

“It shows how broken our supply chain is, and how vulnerable,” he said. “There’s definitely going to be a protein shortage at the retail level if this continues.”

To that end, Martin is working with the Oregon Beef Council — he’s treasurer of the organization — on a campaign to make it easier for ranchers to sell their beef to local consumers through local meat processors.

Ranchers can do that on a one-to-one basis now, but the idea, Martin said, is to expand the offerings.

This would benefit both ranchers who are struggling to find buyers for their butcher-ready cattle, and consumers.

Martin emphasizes that the proposal doesn’t involve any “shortcuts” on sanitation requirements or other food safety standards. But right now, he said, the expense of receiving certification through the U.S. Department of Agriculture means there are relatively few USDA-inspected processors.

Martin believes Eastern Oregonians would welcome a change in the system, at least during the pandemic, because they would appreciate knowing exactly where their meat comes from.

“I think consumer confidence in our area would not be suspect at all,” he said.

Not everyone in the cattle industry blames the abysmal prices solely on the pandemic and its effects on processing plants.

Jones said she believes there is “price manipulation” happening among the four corporations that dominate the U.S. meat packing industry — Tyson, JBS, Smithfield Foods and Cargill.

The National Cattleman’s Beef Association has lobbied Agriculture Secretary Sonny Perdue and President Trump to investigate the “striking disparity between boxed beef prices and cattle prices” in the futures and cash markets during the pandemic.

Several members of Congress have also called for a Department of Justice investigation into potential price-fixing among processors.

Jones and her husband are members of R-CALF, a cattle industry group which contends the cratering cattle prices are connected to an increase in beef imports during the pandemic.

“The record numbers of total imports that occurred in early April correspond to the seriously depressed cattle prices that cattle producers have witnessed ever since,” R-CALF wrote in a post on its Facebook page.

JBS is a Brazilian company with a U.S. subsidiary, JBS USA.

Jones said she believes America should produce all its own food rather than importing it.

“It’s very scary what’s going on now with the self-sufficiency of our food supply,” she said.

Jones said she’s anxious about the future of the ranching industry locally and nationwide.

“I really hope and pray everyone can survive it, but I know they won’t,” she said.