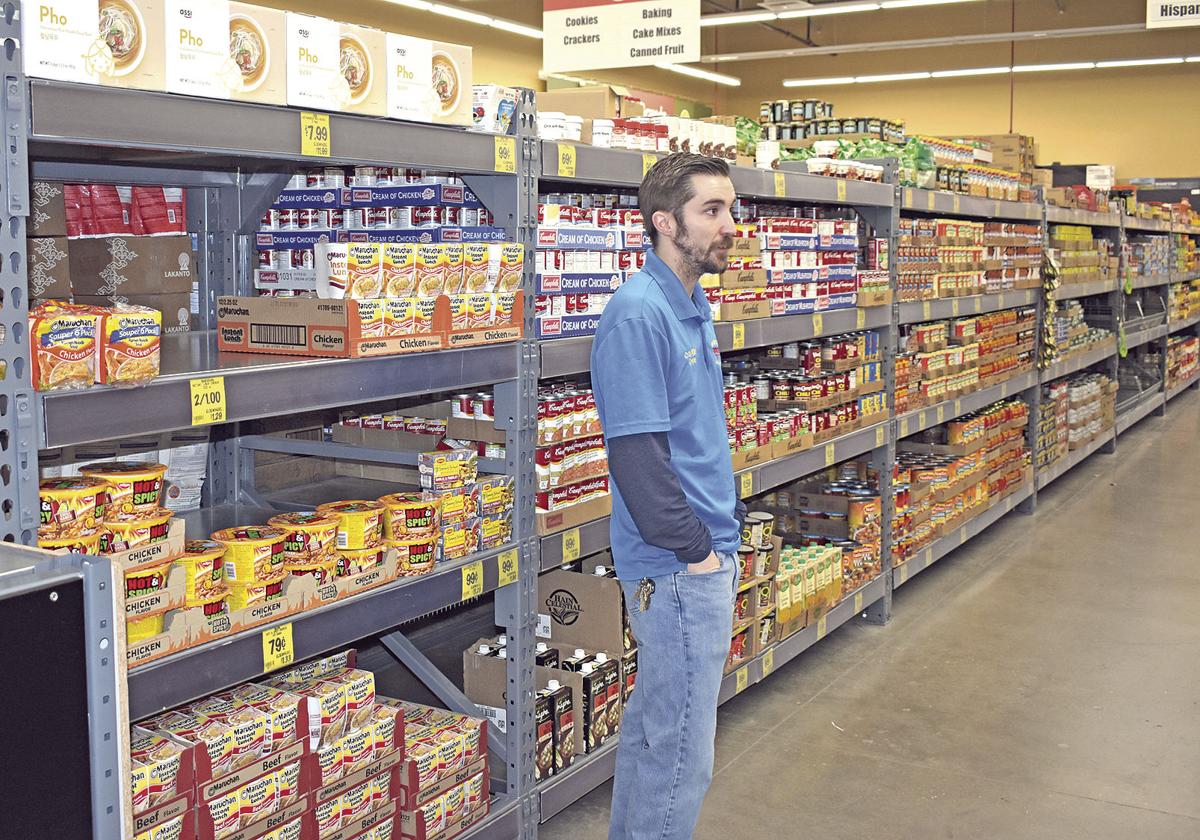 Cody Miller, owner of the Grocery Outlet store in Baker City, said that even after a hectic weekend the store's shelves are well-stocked with most items. 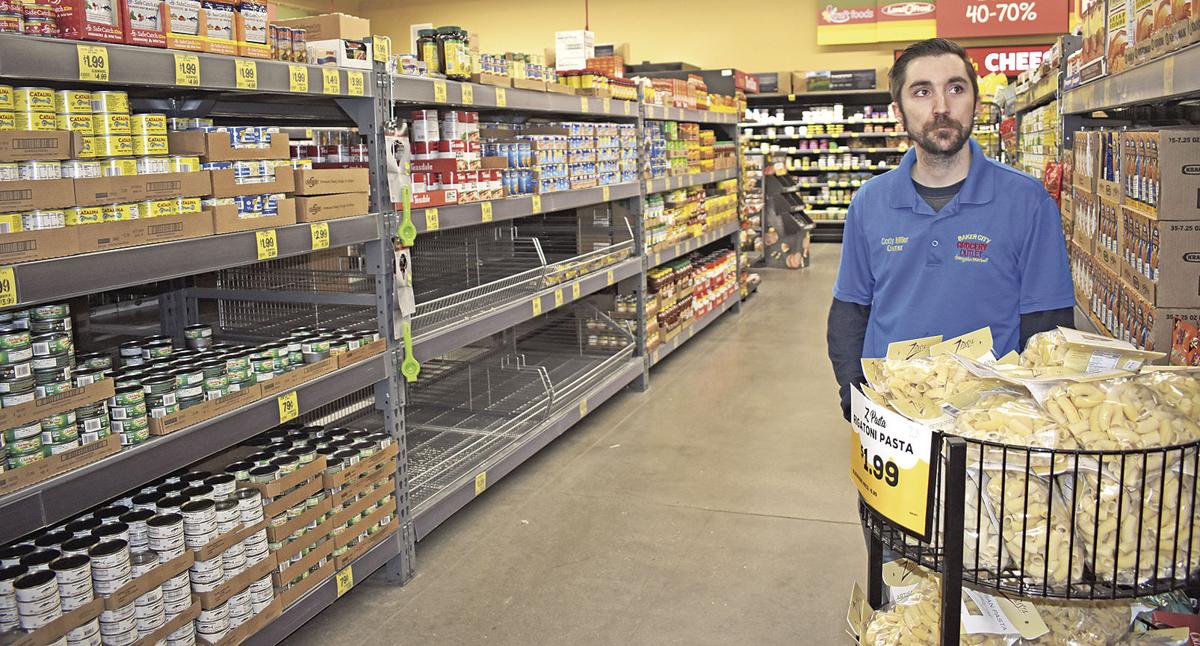 Cody Miller, owner of the Grocery Outlet store in Baker City, said employees have been focusing on sanitizing the store and washing their hands frequently. 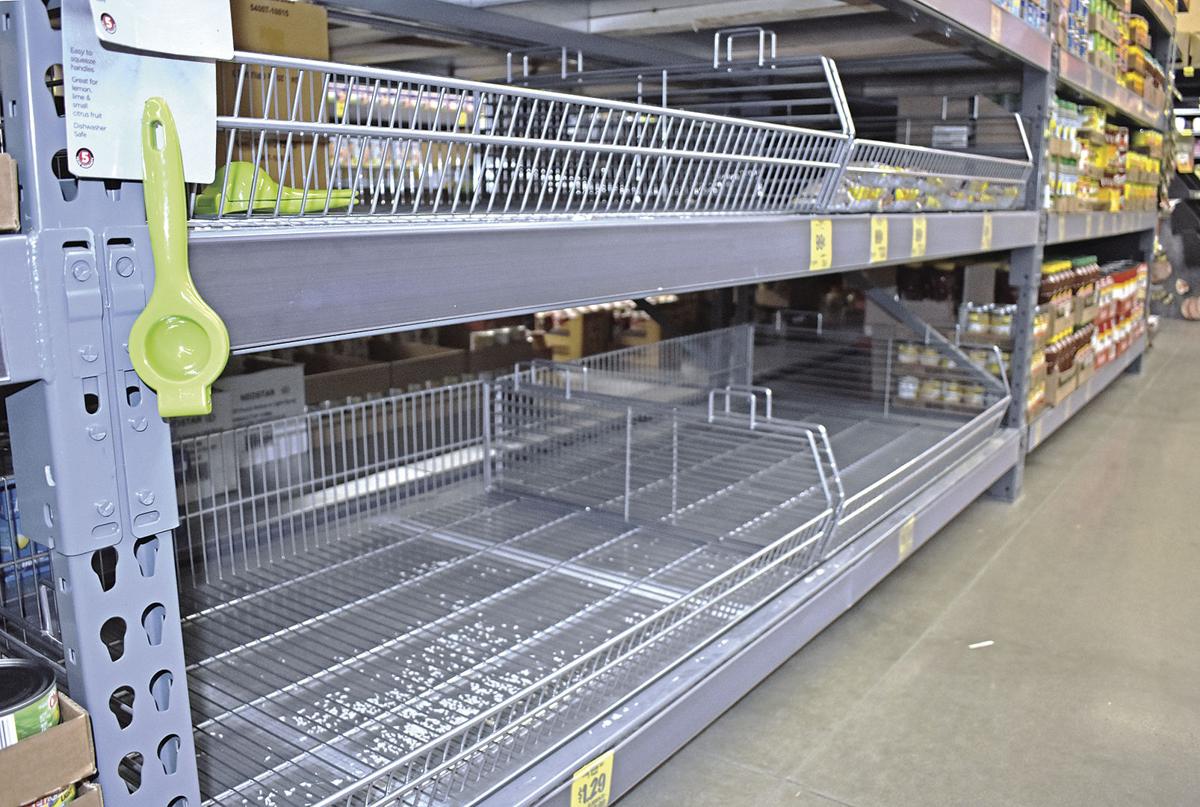 Rice has been among the more popular items for shoppers stocking up during the coronavirus crisis.

Cody Miller, owner of the Grocery Outlet store in Baker City, said that even after a hectic weekend the store's shelves are well-stocked with most items.

Cody Miller, owner of the Grocery Outlet store in Baker City, said employees have been focusing on sanitizing the store and washing their hands frequently.

Rice has been among the more popular items for shoppers stocking up during the coronavirus crisis.

Cody Miller is holding a 16-ounce can of Rockstar energy drink at 8:30 on Sunday morning, which explains perhaps as explicitly as any words what it’s been like to run a grocery store at the dawn of the age of coronavirus.

The spread of the respiratory illness, besides leading to the closure of schools and the suspension of many public events, has prompted residents to pack their pantries as a precaution in case of shortages.

The result was a weekend unlike any other since Miller opened the Grocery Outlet store in Baker City in November 2018.

In common with retailers across the state and in many parts of the country, Miller’s biggest challenge wasn’t to keep the food shelves stocked.

The trouble is toilet paper.

Miller, who owns the Baker City store that is part of the California-based Grocery Outlet chain, said he had heard rumors of runs on toilet paper last week.

It was gone in about a day.

Miller said Grocery Outlet, which has warehouses in Portland and in Sacramento, is working to replenish those facilities and, eventually, the stores with toilet paper and a variety of other products.

But in the meantime, as he strolled the aisles Sunday morning, Miller said shoppers can find most types of foods and beverages.

He said that’s not been the case with some Grocery Outlet stores in larger cities, based on what he’s seen and heard from other owners.

“We don’t look like pictures I’ve seen of other stores,” Miller said. “I don’t think people here have panicked as much, based on what I’ve seen on the news.”

Shoppers have focused on such staples as rice — Grocery Outlet warehouses are already low on that grain, although Miller expects to receive more this week — canned soups, vegetables and fruits, ramen noodles and, that fixture in casseroles, tuna fish.

“Tuna’s been selling like crazy,” Miller said. “Quantity-wise that’s probably been one of my top items.”

He said he ordered 20 cases of Hot Pockets — frozen handheld meat and cheese pies that can be microwaved — but they were nearly gone Sunday morning.

Because canned foods and ramen are typically popular anyway, Miller said he had a goodly supply of those even before the coronavirus came to dominate discussions.

“We still look like a grocery store, just a little beat up in some sections,” he said. “If people are looking to get grocery staples, they’re going to get them.”

He said that overall, sales more than doubled during the weekend.

Miller said the number of customers also increased but not by that much. The difference, he said, is that most customers bought more than they usually do.

If toilet paper isn’t the definitive product of the coronavirus crisis then disinfectant wipes probably are.

Miller said he had a big sale on the wipes just a couple weeks ago, so he had ordered a larger-than-usual supply.

But like the toilet paper, those were picked clean.

“I wish I had bought more,” Miller said.

He said the store does have ample supplies of sanitizer for the building itself, and employees are frequently disinfecting checkout stands and other areas, as well as making sure to wash their hands often.

Although the aisles were tranquil Sunday morning, Miller said the store was so crowded at times during the weekend that he assigned two employees to unload pallets so they could be moved out of the way as quickly as possible and not impede the influx of shoppers.

Miller said he has not changed his store hours.

Nor has he raised prices.

“I don’t think that’s an ethical thing to do,” he said

Miller said most customers have been patient despite the occasional shortages and crowded checkout lines.

“Customers have been very supportive,” he said.

Miller said he was gratified to read a comment on the store’s Facebook page from a customer who thanked a Grocery Outlet cashier who gave her the toilet paper he had already paid for.

The customer wrote that she operates an adult foster home and had run out of toilet paper. The customer was planning to buy napkins instead, but the cashier insisted she take his toilet paper and refused the offer of money for it.

“That’s one of the best things I’ve ever had said (about the store),” Miller said.

The situation appeared similar at Baker City’s Albertsons and Safeway stores, with empty spaces on some aisles but most shelves well-stocked.

Albertsons had a limited stock of toilet paper Sunday morning.

In an email to the Herald, Jill McGinnis, director of communications and public affairs for the company that owns both stores, wrote that: “We are working hard in our stores and distribution centers to refill high demand items as quickly as possible, and as supply chain allows. In many cases, we are working through allocations set by manufacturers and distributors. Currently, Safeway and Albertsons are limiting the purchase of some of these items to broaden availability to more of our neighbors. We have appreciated the patience and understanding of our customers as we do our best to meet their needs.”

Miller said he is pondering setting limits on the purchases of certain items, including toilet paper, but he’s optimistic that the demand for some items will wane, even when new shipments arrive.

“I think everybody’s pretty much papered up,” he said.

And although he rewarded his staff with pizza Saturday night, Miller said he’s temporarily suspended one symbol of unity.

“No high-fives,” he said with a smile.

“We still look like a grocery store, just a little beat up in some sections,” he said. “If people are looking to get grocery staples, they’re going to get them.”