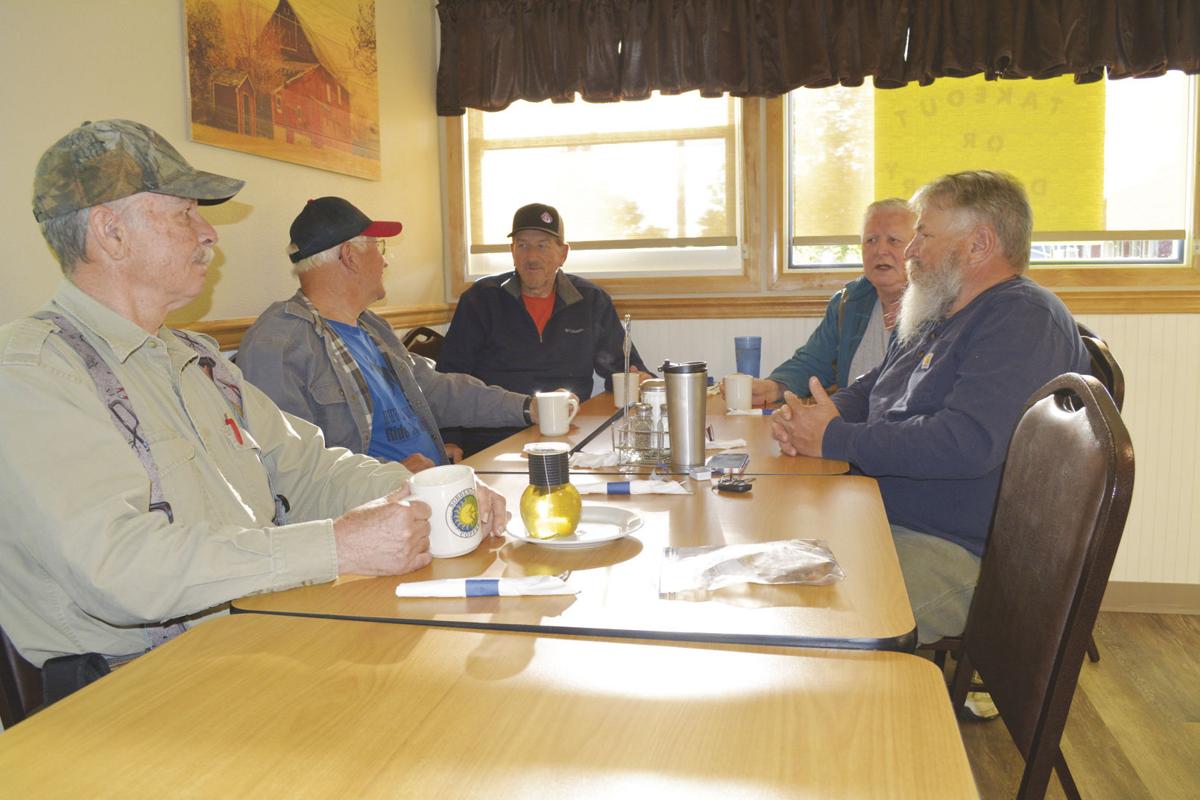 Five buddies gathered for breakfast Friday morning at the Inland Cafe for the first time in about 2 months. From left are Rick Hart, Roger Holden, Lennie Spooner, Larry Brooks and Arnie Grammon. 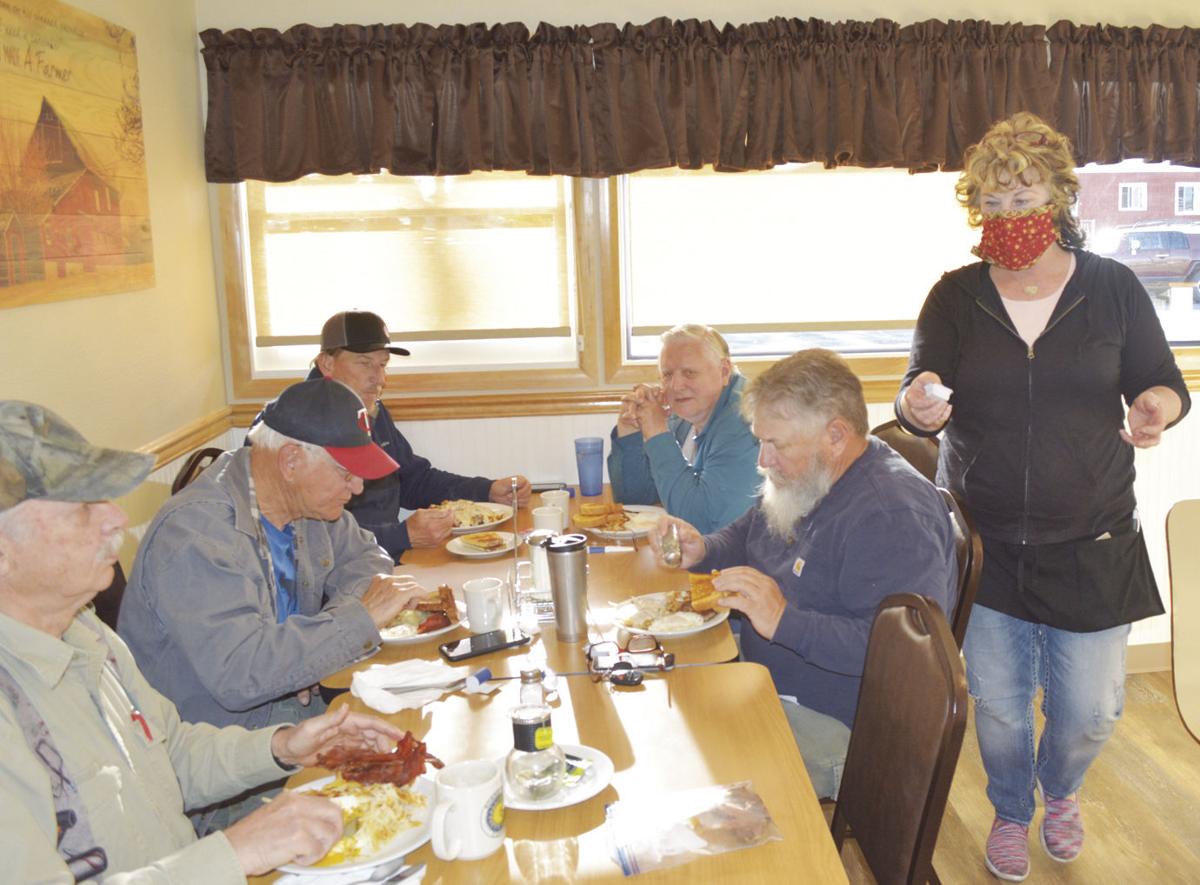 Five buddies gathered for breakfast Friday morning at the Inland Cafe for the first time in about 2 months. From left are Rick Hart, Roger Holden, Lennie Spooner, Larry Brooks and Arnie Grammon.

Before the clock ticked over to the appointed hour this quintet was already deep in conversation, mugs of coffee or tea wafting steam above their tables in the northeast corner of the cafe on 10th Street.

This is their customary spot — the corner where they gather most mornings to tuck into a hot breakfast and kick around all manner of topics.

But for the past 2 months that corner, in common with restaurants across Baker County, has been empty and silent.

“We’ve been doing nothing,” said Lennie Spooner, a member of the group.

Which is not to say the friends haven’t chatted occasionally during the pandemic.

Spooner brandishes his cellphone and smiles.

“This is how we keep in touch,” he said.

But that ersatz version of the group’s regular get-togethers was less than satisfying, all five agreed.

Spooner said they had discussed getting together at one of their homes.

But on Thursday Gov. Kate Brown approved the county’s reopening plan, which allows restaurants, among other businesses, to resume on-site dining.

Brooks and his pals convened at the Inland Friday morning.

Groups like theirs — as much a staple at small-town cafes as plate-sized pancakes and jelly packets stacked in plastic holders — rarely are reluctant to voice their opinions, and when it comes to the coronavirus this bunch is no exception.

Joining Brooks and Spooner at the Inland were Arnie Grammon, Roger Holden and Rick Hart.

Brooks said he believes Brown has exceeded her legal authority in issuing executive orders, and he said he would gladly join as a plaintiff a lawsuit filed May 6 in Baker County Circuit Court that seeks to void those orders.

Brooks said he objects to what he calls the state’s “one- size-fits-all” approach to the pandemic.

Spooner agreed, pointing out that Baker County has had only one confirmed case of the virus.

“In this part of the state we don’t have any issues,” he said.

Holden said he thinks Baker County should have been able to start reopening its economy 2 weeks ago.

Grammon said that although the disease itself hasn’t affected Baker County, the economic repercussions have.

“It’s huge when so many people lose their jobs,” he said.

Hart: “It’s put a whole bunch of people out of work for no good reason.”

The limit on 25 people in a variety of gatherings, including church services, has also affected the men, all of whom are Christians.

Spooner is associate pastor at the Baker City Church of the Nazarene.

Although it has, like many churches, used video technology to make services available, Spooner said it’s a poor substitute.

“It’s been a real struggle,” he said. “It’s time to go back to what church really is, and that’s not livestreaming. Church is the fellowship of saints, in close quarters. It’s hard to feel like you’re having church, because you’re really not.”

Grammon, who attends the Baker City Christian Church, said the church would like to be able to resume some type of in-person services if the governor allows the county to move into the second phase of reopening. That could potentially happen 21 days from Friday, provided the county doesn’t see a significant number of positive cases.

Although state officials are still working on specific guidelines for the second phase, a preliminary plan would increase the limit for gatherings from 25 to 100, with social distancing continuing.

“Without meeting, how are you really having a church?” Grammon said.

The past two months have been difficult for members of the congregation, he said.

“It’s who we are, what defines us as people,” Grammon said. “We’re Christians.”

Spooner said he’s optimistic that the annual summer God and Country event will happen as planned on July 5 at Geiser-Pollman Park. The event, which involves several local churches, has taken place every year since 1992.

None of the men wore a face mask Friday morning.

(Oregon does not require customers to wear face masks, although state officials strongly encourage patrons to do so.)

All five said they’re not concerned about contracting the virus although they understand that their ages — Grammon, at 62, is the youngest, 2 years younger than Spooner — put them at higher risk for serious effects if they were infected.

Brooks said he and his wife, Eva, who are both 74, have diabetes. He has heart issues.

“I’m not worried at all,” he said. “You can’t run around in fear of something that might happen.”

Although the five men easily settled into their familiar routine, the situation wasn’t the same as before the pandemic.

Some booths were closed to maintain social distancing, as the state requires during the first phase.

And when Cloie Christensen arrived with plates of food she wore a face mask, as the state requires.

She also had to get a phone number from one member of the group for potential contact tracing should a confirmed case of the disease be tracked to the restaurant.

Other rules for restaurants, bars and breweries:

• Ensure tables are at least 6 feet apart. If booths are back-to-back, open only every other booth.

• Limit parties to 10 people. People in the same party do not have to be 6 feet apart.

Spooner, Grammon, Holden, Hart and Brooks said they were just happy to return to their favorite place for breakfast — and talk.

“As long as the Inland is open it’s OK,” Spooner said.

“I’m not worried at all. You can’t run around in fear of something that might happen.”