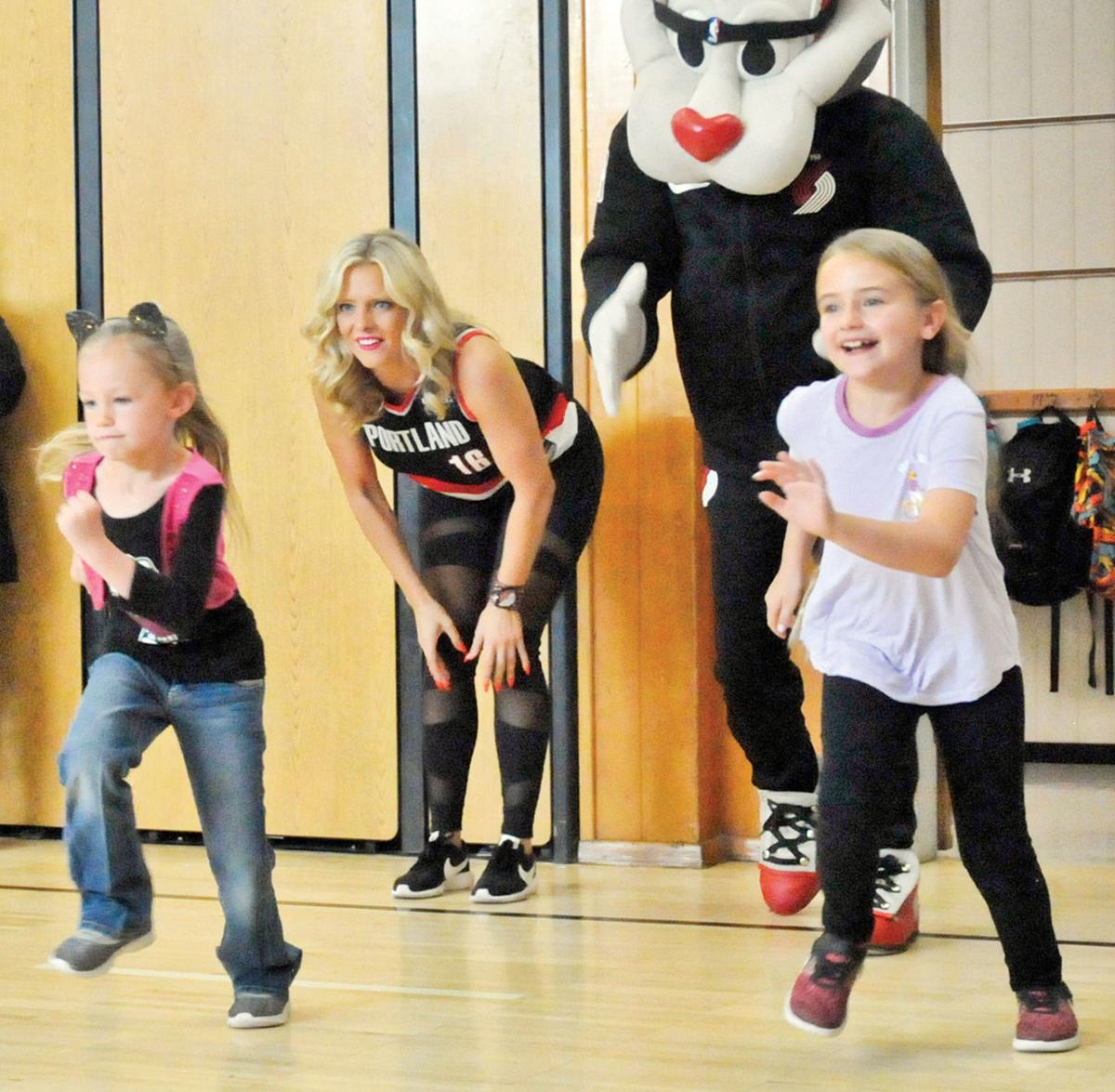 S. John Collins / Baker City HeraldRemington McMurdo, left, and Rogue Lunyou start their race across the gym. They will do jumping jacks, race back to the start for jump roping, race to the far side again to race back on tricycles to finish. Blazer Dancer Jackie and mascot Blaze Trailcat are in background.

S. John Collins / Baker City HeraldRemington McMurdo, left, and Rogue Lunyou start their race across the gym. They will do jumping jacks, race back to the start for jump roping, race to the far side again to race back on tricycles to finish. Blazer Dancer Jackie and mascot Blaze Trailcat are in background.

Beginning a day of activities and fun with the Rip City Rally, representatives and personalities from the Portland Trail Blazers gathered Monday afternoon at Baker City’s Brooklyn Primary School to put on an assembly for more than 300 students.

Brooklyn Principal Phil Anderson told his students he received a call last spring from the Trail Blazers about having an assembly at their school.

“I’ve been waiting for this for a long, long time,” Anderson said.

Todd Bosma, director of game operations for the Trail Blazers, led the assembly in encouraging students to be active instead of going home and watching TV or playing video games all day.

Joining Bosma were members from Moda, the insurance company for whom the Blazers’ arena in Portland is named — Mina Zarnegin, Noah Pietz and Mike McGuffey. Two Blazer Dancers, Natalie and Jackie, and Blaze the Trail Cat were there as well.

“Moda is giving you guys brand new playground balls because they want to make sure you have everything you need to go outside and play, so we will give you these playground balls if you promise to use them,” Bosma said.

The students promised to use them.

Bosma told the students that the Trail Blazers’ players were in Portland getting ready for their upcoming season, which starts Oct. 23 with a game at the Moda Center against the Denver Nuggets.

The Blazers’ preparation is comparable to what the students are doing at Brooklyn, Bosma said.

“You guys are getting ready for whatever the next grade is going to be, whatever’s going to happen next week here, if you have any assignments,” he said. “So, we’re excited that we are out here to get you guys ready not only for the Rip City fair, the Trail Blazers’ season, but an awesome school year.”

Bosma also encouraged the students to encourage one another and to work together just as the Blazers do.

“So we need you guys to continue the awesome work you’re doing in this school being great teammates,” he said.

During the assembly in the Brooklyn gym, Bosma had four students participate in a competition. Two girls went first, followed by two boys.

The students ran from one side of the gym to the other, did 10 jumping jacks, ran back to the beginning side, did 10 jump rope cycles and then raced back on tricycles.

Originally, Bosma told the students he had asked Anderson send out his “spies” to find students who were paying attention in class, doing all of their assignments, and being respectful, a good friend, and encouraging their schoolmates.

He then told the students that Anderson had too many students to choose from and they decided to put the kids’ names in a hat and pulled out volunteers.

The Blazer Dancers helped the students keep track of how many jumping jacks and jump ropes they did, cheering them on with the other students.

Lunyou won the competition, and Bosma told the students: “I know one thing that’s really important about this school, whether we win or whether we lose, students in this school support one another.”

Bosma gave McMurdo a T-shirt for participating and the other students told her “good job” as she returned to her seat.

Following the girls were two boys, third-grader Clancey Boehm and second-grader Jaxon Agard. Boehm was the victor and Agard was given a T-shirt.

Boehm then won victory over Lunyou before second-grade teacher Morgan Colvin and paraprofessional Megan McGuiness were picked to participate as well.

Colvin won and faced Boehm for the final round, where Boehm won again. All participants received a T-shirt.

Bosma told the students about the Rip City Rally and a little history of the Trail Blazers.

“Fifty years ago, the Trail Blazers started,” he said.

He went on to tell the students about the Blazers’ original radio broadcaster Bill Schonely, who coined the term “Rip City” to describe a shot that rips through the net, and franchise founder Harry Glickman, who traveled around the state “getting people excited and drumming up support for the Trail Blazers.”

“And so we’re recreating that now 50 years later,” Bosma said. “We’re doing the exact same thing and stop number one is right here in this school and we’re so excited that you guys are here today.”

Protester's message for looters: Something is wrong with you