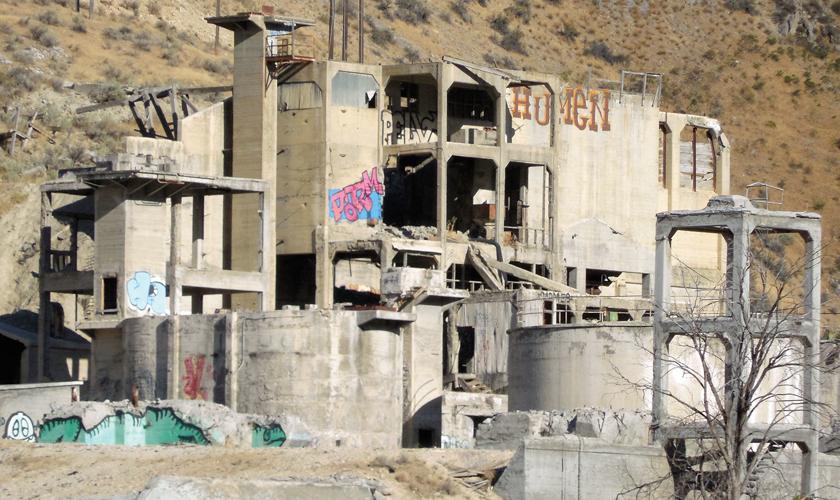 A section of the abandoned lime plant near Huntington in 2016, before the property was cleared. 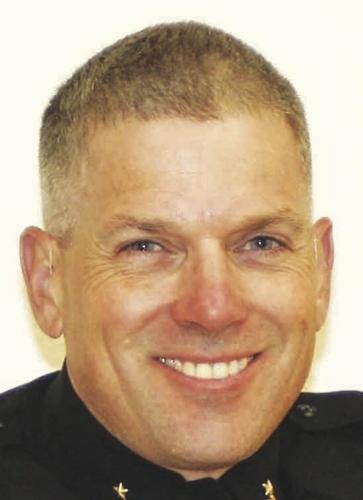 A $1.3 million civil rights lawsuit that a former Baker City man filed more than three years ago against Baker County and Sheriff Travis Ash is still pending in federal court, although a federal magistrate judge recently recommended that all but one of the claims be dismissed.

Nilsson, 51, who is representing himself and is seeking a jury trial, contends the county and Ash violated his constitutional rights under the First, Second and Fourth amendments in August 2017.

The Fourth Amendment claims are based on a warrant search that the sheriff’s office conducted of Nilsson’s home and vehicle.

That search stemmed from an incident on Aug. 1, 2017, at the abandoned lime plant near Huntington in which Sheriff’s Deputy Gabe Maldonado cited Nilsson for trespassing with a firearm and criminal mischief.

Nilsson said in 2017 that he and a friend had gone to the lime plant, which the county owns and where it had posted no trespassing signs, to photograph graffiti.

On Sept. 22, 2022, Andrew Hallman, a U.S. magistrate judge, recommended that Ash and the county’s motion for summary judgment — meaning Nilsson’s claims would be dismissed — be granted for all but one of those claims, including his contention that Ash violated his Second and Fourth amendment rights.

Hallman recommended that Nilsson’s other claim, that Ash violated Nilsson’s First Amendment rights, be decided at trial. Nilsson contends that Ash retaliated against him, including by participating in the search of Nilsson’s vehicle and home, after Nilsson complained to the sheriff about how he was treated by police during the incident at the lime plant. Nilsson also gave media interviews about the lime plant incident in which he complained about how Maldonado treated him and his friend.

Hallman, as a magistrate judge, does not have the authority to grant summary judgments. His recommendations will go to Judge Michael Mosman, who will decide, probably within a few months, whether to approve Hallman’s recommendations in whole or in part.

The Second Amendment violation claim is based on Ash suspending Nilsson’s concealed carry handgun permit after Nilsson pleaded guilty in November 2017 to one count of third-degree criminal mischief, a Class C misdemeanor, for spray-painting graffiti at the lime plant. The charge of criminal trespassing while in possession of a firearm was dismissed in a plea agreement with the district’s attorney’s office.

In his recommendations, Hallman wrote that the four-year suspension of Nilsson’s permit does not violate Nilsson’s Second Amendment rights.

In a written statement to the Baker City Herald, Ash wrote: “As the sheriff of Baker County, I consistently work to earn the public’s trust. To that end, I continue to deny the claim Mr. Nilsson has raised against me in his lawsuit.”

Nilsson wrote in a text to the Baker City Herald: “I’m confident that a jury will find that Sheriff Ash retaliated against me. As long as Ash is held to account for retaliation I’m satisfied. I’m concerned with truth and accountability, not vindication and punishment.”

Ash, who along with the county is represented by Salem attorneys Aaron Hisel and Elizabeth A. Jones, filed a motion on Oct. 1, 2021, seeking to dismiss the First Amendment violation claim as well as Nilsson’s claims about Second and Fourth amendment violations.

But Hallman disagreed, writing in his findings and recommendations on Sept. 22, 2022, that Ash is not entitled to summary judgment on Nilsson’s First Amendment violation claim.

Ash’s attorneys argued that the sheriff and other county officials searched Nilsson’s home and vehicle not as retaliation for his public statements that criticized their actions, but as a normal part of a criminal investigation.

Hallman conceded that this interpretation is one “that a reasonable juror could accept.”

However, Hallman also notes that summary judgments are appropriate only in situations where there is no “genuine issue of material fact” — in effect, when a reasonable juror could only reach one conclusion on the issue at hand.

But so long as a reasonable juror could come to more than one conclusion, a summary judgment is not warranted, Hallman wrote.

In this case, Hallman wrote, Nilsson “has demonstrated a genuine issue of material fact: whether Defendant Ash retaliated against Plaintiff for exercising his rights under the First Amendment.”

Hallman also wrote: “When the evidence is viewed in the light most favorable to (Nilsson), a reasonable juror could conclude that retaliation was a substantial or motivating factor behind the search.”

Hallman noted that although other people have trespassed at the lime plant and painted graffiti there, during the five years prior to Nilsson being cited in August 2017, the sheriff’s office didn’t apply for any search warrants as part of other investigations related to graffiti at the property.

Ash’s attorneys countered by pointing out that another man, about one month after Nilsson was cited, was also arrested for similar violations at the lime plant.

Hallman noted, however, that the sheriff’s office did not apply for a search warrant in that case, although the suspect lived in a different state.

Ultimately, Hallman concluded, Nilsson has raised an “issue of fact” about whether retaliation was a factor in the search of his home and vehicle, and so Ash is not entitled to a summary judgment on that single claim, and that it should be decided by a jury.

Hallman reaches a different conclusion with regard to Nilsson’s claim that Ash, through the August 2017 search, violated Nilsson’s constitutional rights against unreasonable searches and seizures.

Hallman concludes that aspects of that search, including the county seizing papers, a micro-SD card, cellphone and computer tablet, are not constitutional violations even though, as Nilsson noted in his complaint, some of those documents and devices contained data not related to the incident at the lime plant.

In regard to the papers, for instance, Hallman writes that “Defendant Ash was not required to parse through each page of the legal pad to determine which pages directly related to the incident at the Lime Plant.”

Claims against other defendants dismissed

After filing the lawsuit in 2019, Nilsson submitted an amended complaint on April 1, 2021, naming as additional defendants Jef Van Arsdall, then the Baker County undersheriff (he has since moved out of the county), Maldonado and two other officers from the sheriff’s office, Lt. Will Benson and Sgt. Eric Colton.

The claims against the city, Lohner and Regan were dismissed on Aug. 23, 2021, after their attorney filed a motion stating that Nilsson’s claims were not timely.

Hallman recommended in his Sept. 22 findings that the claims against Van Arsdall, Maldonado, Benson and Colton also be dismissed.

Hallman wrote that, as was the case with Nilsson’s amended suit naming the city, Lohner and Regan as defendants, there is a two-year statute of limitations for adding defendants. Hallman recommended that the same criteria that the court used to dismiss claims against the city defendants also apply to Van Arsdall, Maldonado, Benson and Colton.

Nilsson, in a text to the Baker City Herald, acknowledged that he filed the amended suit, naming the other defendants, too late.

But Nilsson said that the amended complaint ensures there is a “more detailed and complete record of events.”

“I’m not going to berate myself for not being a great lawyer,” Nilsson wrote, referencing his decision to represent himself in the lawsuit. “I’m learning as I go.”

"As the sheriff of Baker County, I consistently work to earn the public’s trust. To that end, I continue to deny the claim Mr. Nilsson has raised against me in his lawsuit.”

“I’m confident that a jury will find that Sheriff Ash retaliated against me. As long as Ash is held to account for retaliation I’m satisfied. I’m concerned with truth and accountability, not vindication and punishment.”

Sign up to receive news directly to your desktop. Click the bell icon in the nav bar, at any time to change your settings.

You don't have any notifications.

Get up-to-the-minute news sent straight to your device.

Check your email for details.

This offer is currently unavailable.