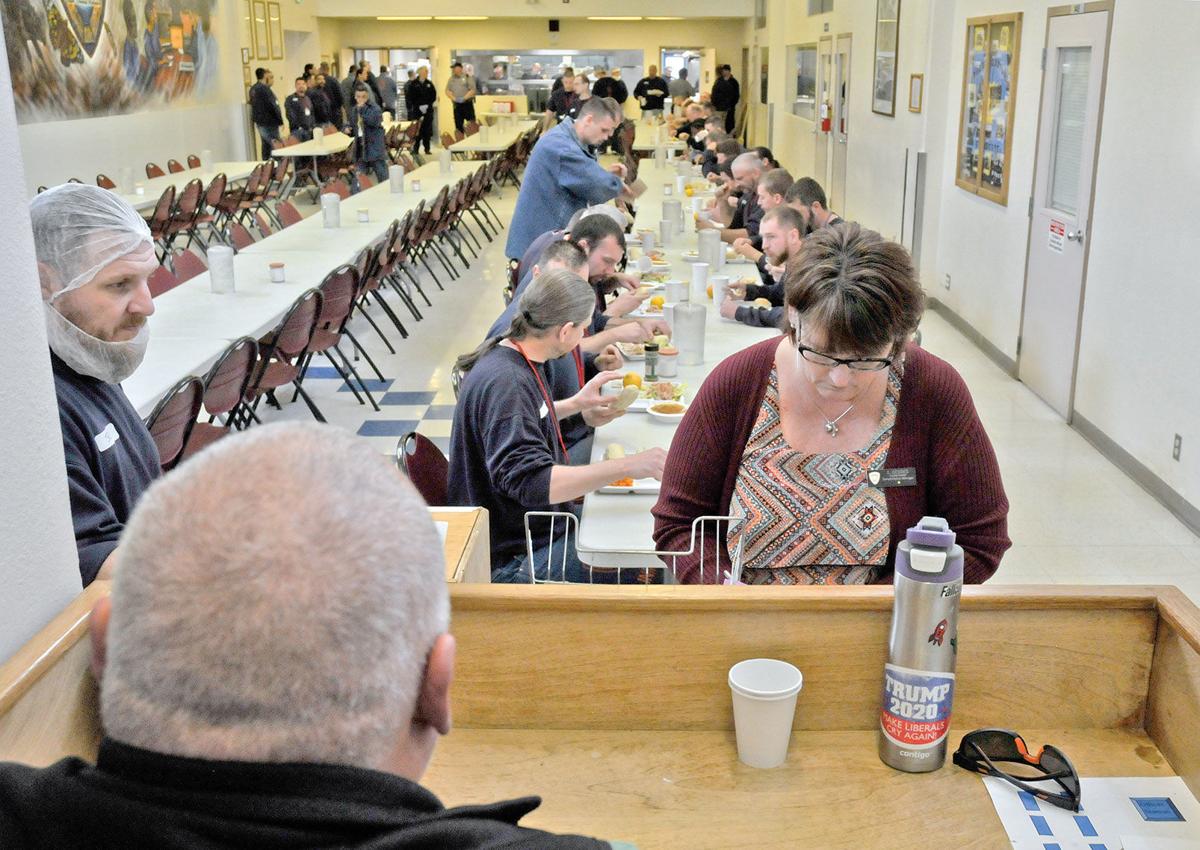 Debi Geddes takes care of some paper work for an inmate, left, in the cafeteria at Powder River Correctional Facility in Baker City. 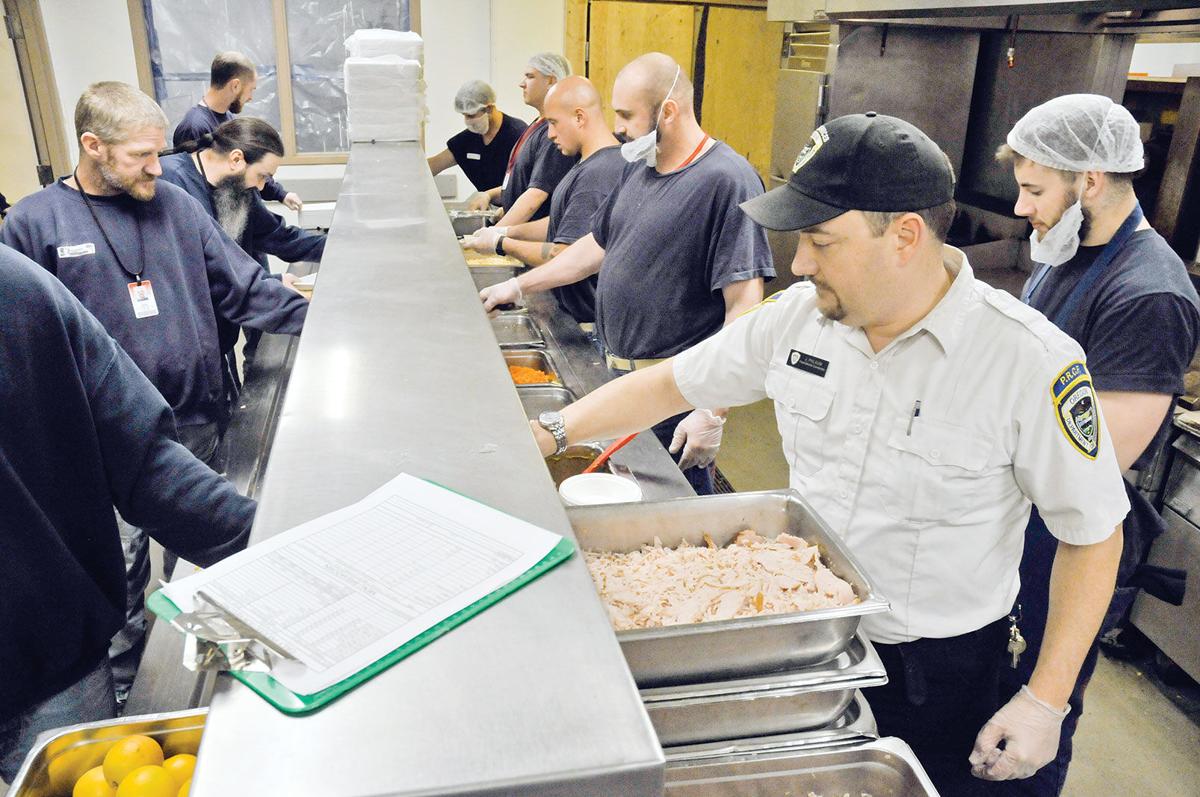 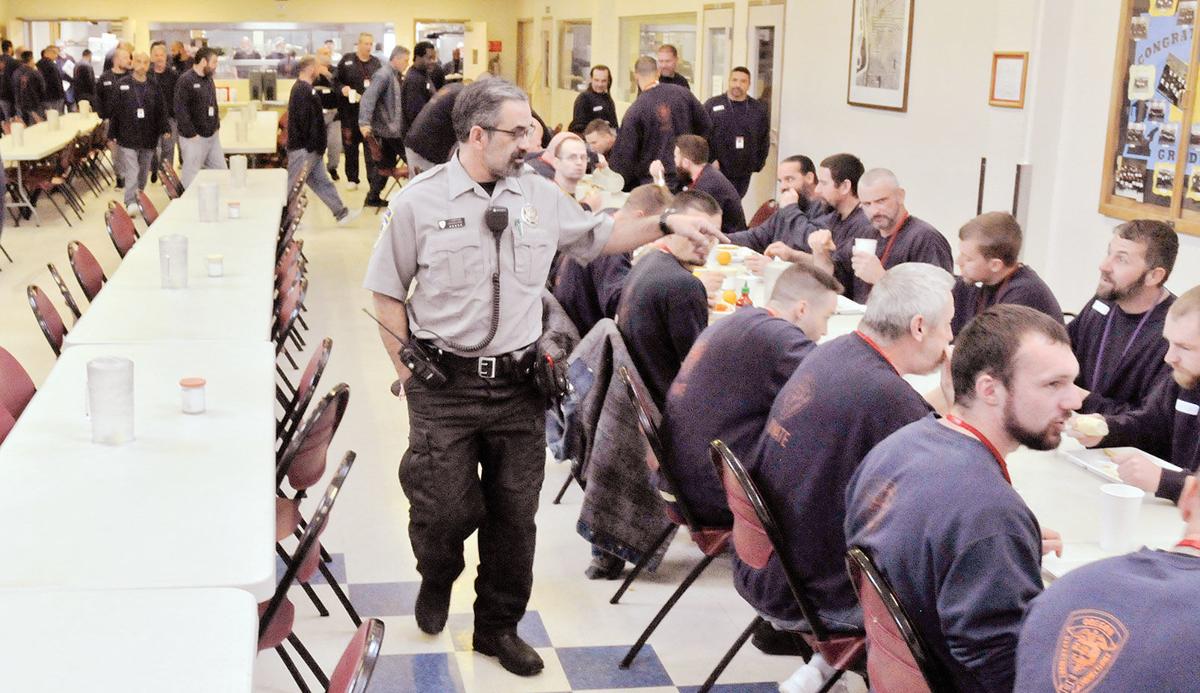 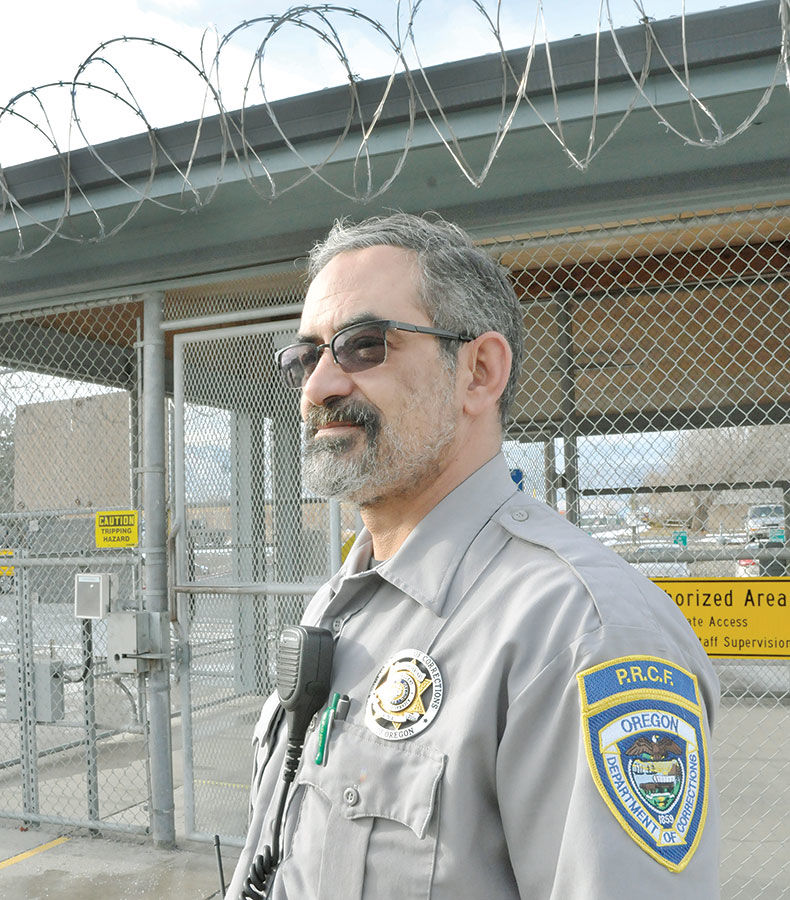 James Simpson is the longest-tenured employee at the Powder River Correctional Facility in Baker City. Simpson, a correctional officer, started work in February 1990, three months after the prison opened.

Debi Geddes takes care of some paper work for an inmate, left, in the cafeteria at Powder River Correctional Facility in Baker City.

Debi Geddes’ workplace sprawls across 9 acres inside the Baker City limits but she still comes across residents who couldn’t pinpoint the place on a map.

And occasionally Geddes meets someone who is surprised when she names her employer.

The minimum-security prison, at 3600 13th St. in northwest Baker City, not only is among the larger operations in town, with several buildings and a conspicuous 12-foot-high perimeter fence topped with coils of razor wire.

It’s also a venerable one.

The prison in its original configuration was built for $3.7 million but it has expanded since, with new buildings boosting its capacity from 150 inmates to the current 366. Dan Johnson was Powder River’s first superintendent. He served two stints in that position, through 1994 and again from 1998 until he retired in 2006.

(The facility won’t grow any larger, as the current capacity is the maximum for the property, superintendent Tom McLay said.)

About 100 people work at Powder River — 79 employees of the Oregon Department of Corrections, and another 20 who are part of the New Directions Northwest staff that runs the prison’s alcohol and drug treatment program in which 128 inmates are enrolled.

Geddes, who has worked at Powder River for 11 years, said she doesn’t think the facility’s relatively low profile is a negative — it’s not a retail business that needs to attract customers, after all.

“It probably means we’re being good neighbors, and I think that’s a good thing,” Geddes said of her occasional conversations with residents who know little or nothing about Powder River.

McLay, who has worked at Powder River since July 2017 and was promoted from security manager to the prison’s superintendent in October of this year, said the facility’s security record likely also contributes to its anonymity.

Powder River hasn’t had an inmate escape from the facility, or from a work crew outside the fence, since 2006.

“Protection of the community is our number one priority,” McLay said.

Most of the 58 inmates who have escaped either from inside the prison or while working outside did so during the first six years of operation — 44 in all during that period, including 26 who scaled the fence, which did not originally include its topping of razor-sharp wire.

The Department of Corrections installed that extra barrier in February 1996.

After that, just three inmates got away from inside the prison grounds, and none of the three climbed the fence.

Several who tried to do so failed — and some suffered cuts during the attempt.

But McLay and Geddes say that the razor wire, though it has proved to be an effective deterrent, isn’t the only reason escapes from Powder River stopped.

They also cite the AIP — Alternate Incarceration Program — which started at Powder River in January 2003.

A total of 128 inmates are enrolled in the program, under which they can qualify to be released up to a year early if they complete alcohol and drug treatment.

Once released, men in the AIP program remain under custody of the Department of Corrections for three months, during which they have to attend meetings and achieve other criteria or risk being returned to prison (although they would be incarcerated somewhere other than Powder River).

Inmates in the AIP program have an incentive to stay in the program, McLay and Geddes said.

James Simpson, a correctional officer who is Powder River’s longest-tenured employee, having started in February 1990, just three months after the facility opened, agrees that the addition of the AIP program had a profound effect on inmates’ attitudes. Simpson believes that has played a more important role in reducing escapes than physical barriers such as the razor wire.

Simpson said prison officials make sure inmates are aware of the project, and that if they did escape their chances of getting away would be reduced.

Nor is early release the only benefit that Powder River inmates stand to gain from participation in the AIP program, said Dennis Walton, who works for New Directions Northwest and directs its award-winning alcohol and drug treatment program.

Inmates who are in treatment, including those who aren’t in the AIP program and can’t qualify for early release, can overcome the addictions that in most cases contributed to their committing the crime that brought them to Powder River, Walton said.

About 80 percent of crimes involve alcohol and drug use in some way, he said.

Powder River’s treatment program, the largest in Oregon’s corrections system and the only one in which a contractor runs the program inside the facility, has a success rate between 80% and 90%, Walton said

“They’re actually getting better,” he said of the inmates who complete the program.

Walton said the treatment regimen’s efficacy is one reason he believes Powder River’s future is secure.

“As long as we continue to do what we’re doing here, I don’t see us being shut down,” Walton said.

McLay also said the Corrections Department’s budget has been stable over the past several years.

But the prison’s status hasn’t always been so certain.

In both 2001 and 2002, Powder River was on a list of state prisons slated for potential closure due to budget cuts.

A more significant financial crisis in 2010 led to the Corrections Department proposing to close three minimum-security prisons, including Powder River. Closing the Baker City prison would have saved the state an estimated $7.9 million per year.

And Powder River hasn’t been on any closure lists in the past decade.

Which is not to say the facility has been immune to budget challenges.

In 2010 the state ended a subsidy that made it possible for as many as 10 crews of 10 inmates each doing a variety of jobs outside the prison.

Today Powder River has only one such crew. Its duties include maintenance around the Baker County Library, the Oregon Trail Interpretive Center and the Senior Center.

McLay said Powder River also has two 20-man crews available to help with wildfires when needed — one crew that works on the fire itself, and another that can operate a kitchen at a fire camp.

Karen Yeakley, a former Baker City mayor who serves as chair of Powder River’s Prison Advisory Committee, believes the work crews helped ease residents’ concerns about the potential effects of the prison, fears that some people expressed after community leaders in the late 1980s started lobbying state officials to build the facility here.

Yeakley’s first involvement with Powder River, not long after it opened, was to help serve cake and ice cream to inmates as a reward for their work in the community.

Since then Yeakley has taught budget classes at the prison and done a variety of other tasks. She’s also been a vocal proponent of the beneficial effects of Powder River, and in particular the alcohol and drug treatment program.

For her part, Yeakley said it just makes sense that the Corrections Department would focus on the underlying issue with so many crimes by not merely housing inmates but also striving to help them deal with the alcohol and drug abuse.

“I’d rather have somebody getting out who’s not going to re-offend,” Yeakley said. “New Directions does a great job. It’s a very positive thing.”

Although addiction treatment, and its attendant effects on recidivism rates, has been a hallmark of Powder River, Baker City’s original goal in lobbying state officials for the facility was to boost the economy, said Richard Chaves, who was a member of the prison siting committee created by the Baker County Court (today’s Baker County Board of Commissioners) in early 1987.

He said Peggi Timm, a longtime Baker City promoter, was “leading the charge,” and she asked him to help write grant applications for the prison project.

Timm, who died in July 2013 at age 74, was also a member of the prison siting committee.

Baker City competed with La Grande, among other places, for what became Powder River. It was the first new prison the state had built in a dozen years, and the first in a series of several facilities that opened between 1989 and 2007.

On Jan. 13, 1988, a state prison siting panel had a three-hour public hearing in Baker City to take testimony from local proponents and from La Grande officials, which offered the state a 5-acre parcel.

The next day the panel voted 4-1 to recommend the state build the prison in Baker City. On March 2, 1988, Goldschmidt, the governor, approved that recommendation.

Although both Chaves and Yeakley recall some residents expressing concern about “camp followers” — that families of inmates would move to Baker City — that phenomenon didn’t materialize.

And that’s no coincidence, Geddes and McLay said.

What that means, among other things, is that inmates rarely are at Powder River for more than three or four years, with a two-year stay being more typical, she said.

Inmates are either sent to Powder River because their sentence is relatively short, or because they’re nearing the end of a longer incarceration, she said.

Because most inmates are from west of the Cascades, it makes little sense for their families to move 300 miles or more for a relatively short period, Geddes said — even presuming the families can afford to do so.

Indeed, she said families of most Powder River inmates aren’t able even to visit often, much less to move.

Visitors are allowed on Saturdays, Sundays and holidays.

“We don’t have the volume of visitors that bigger institutions have,” Geddes said.

Inmates are able to use their earnings from work — about 74% of the inmates have regular jobs, alcohol and drug treatment counting as work — to have video visits with relatives, Geddes said.

(Although inmates can also text family, they do so through a secure system, not through the internet, and they’re limited to communicating with people on a list approved by Corrections Department officials.)

Chaves said he believes Powder River has achieved the goals that local leaders had more than three decades ago.

“I think it has been successful,” he said. “I really don’t think it’s had any negative impacts on the community.”

In fact, Chaves said the most frequent concern he has heard over the years regarding Powder River involved the prison being on a closure list, and residents worried that the facility would close and the community would lose one of its larger employers.