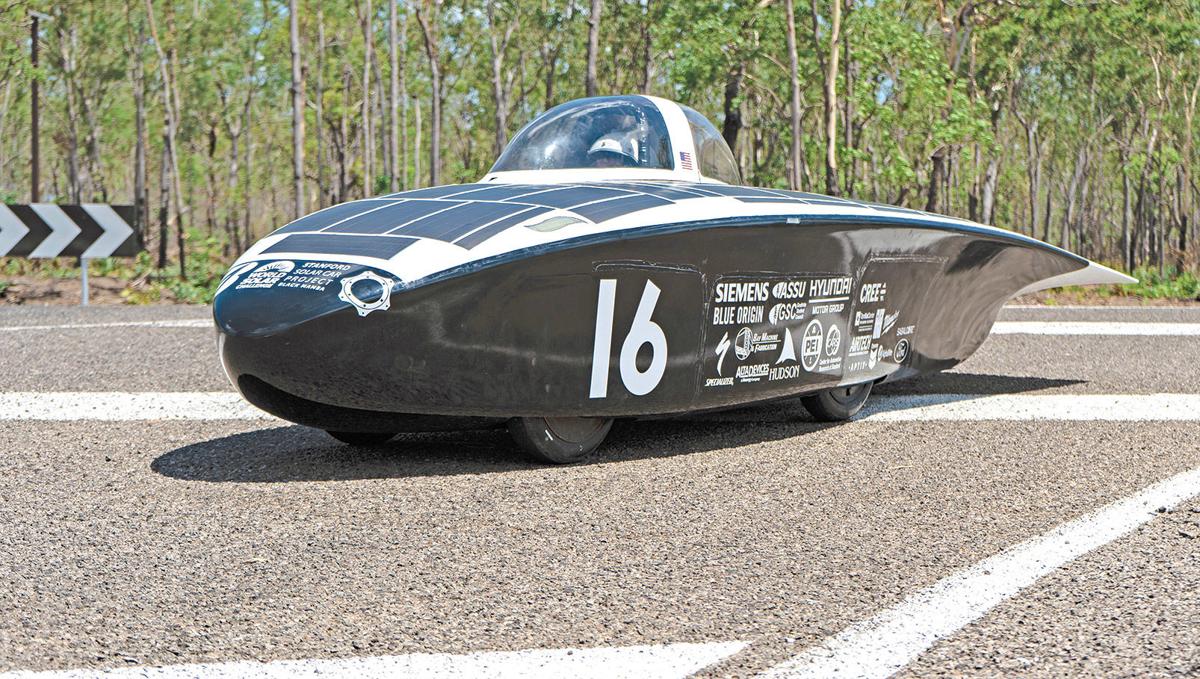 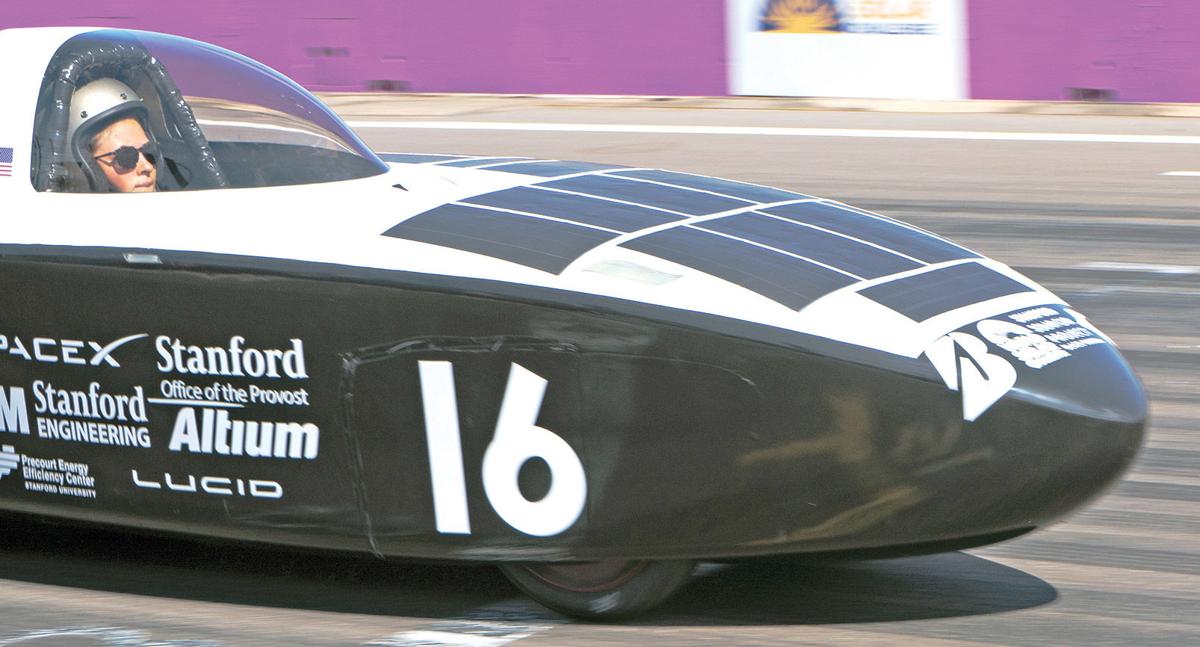 One of Sarah Spaugh’s teammates from Stanford University drives the solar-powered electric car the team designed and built to compete in an international race in Australia. 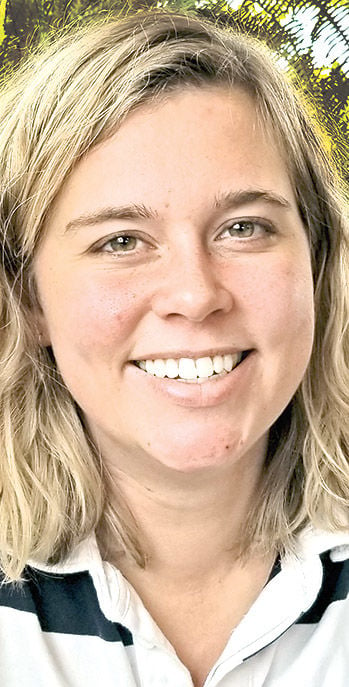 One of Sarah Spaugh’s teammates from Stanford University drives the solar-powered electric car the team designed and built to compete in an international race in Australia.

Sarah Spaugh’s story seems to end almost before it starts.

Her story about racing a solar-powered car across the Australian Outback, anyway.

“Our car did not, unfortunately, finish the race,” Spaugh said. “Our battery caught on fire — it burned up on the side of the road in the middle of the Outback.”

Every two years a team from Stanford enters a solar car in the Bridgestone World Solar Challenge in Australia. The event, according to its website, “is primarily a design competition to discover the world’s most efficient electric car.”

Spaugh joined her first solar car team in 2016 during her junior year at Palo Alto — halfway through the two-year cycle.

“A full car is a two-year project,” she said. “You spend six months just on aerodynamics.”

That car raced in October 2017. She was part of the tech crew.

Spaugh’s more recent solar car project ran from 2017 to the race in October 2019. This time she was on the leadership team.

The competition has been a Stanford tradition since the late 1980s.

“It’s an established student club — one of the more life-consuming clubs,” she said.

One year ago Spaugh’s team of 22 students created a timeline for finishing the car’s subsystems.

“We’re notorious as a team for falling behind schedule,” she said.

They should have had the vehicle finished and tested by the beginning of June 2019. But that month found the team members working from 9 a.m. to midnight in a rush to complete the car.

The team designs every part of the car. Some pieces they make on campus, while others are created by professional machinists.

Her team didn’t have much chance to test their design before shipping the car to Australia in August.

And testing is crucial to any invention.

“When you build something from scratch, the first time you take it out things will start breaking,” Spaugh said. “It’s worth it, a trial by fire.”

Creating the car, she said, allows students to put theories learned in classrooms to work on a real-world project.

“The learning happens when you’re designing, building, testing,” she said.

She learned a lot about how cars work.

“I had a decent idea of how it worked in a gasoline car,” she said. “This showed me how it works in an electric car, down to the nitty-gritty.”

To compete in the race, Spaugh and her teammates took a term off school. She arrived in Australia on Aug. 28 to arrange transportation, food and other logistics of supporting a team through the middle of the continent.

The rest of the team arrived Sept. 4. They spent the remainder of that month testing and tweaking their solar car while camping in the Outback.

Growing up in Eastern Oregon, Spaugh is no stranger to the outdoors. That wasn’t the case with some of her teammates.

“You have people who had never camped in their lives,” she said.

During testing the Stanford team traveled the race course in reverse, from Adelaide north to Darwin. The route is approximately 3,000 kilometers (1,864 miles).

“It’s a big experience being there,” Spaugh said. “Getting the car functioning, and fixing it when it breaks down.”

During tests the team recorded data to determine how much energy the car uses at various speeds.

The goal, Spaugh said, was “to get the fastest time possible without running out of battery.”

On a flat road with no wind, she estimates the Stanford car could go about 250 miles at 55 mph.

The team had five rental vehicles — several to haul supplies and one outfitted with antennae to collect data transmitted from the solar car.

Although they’d struggled with a bug in the electrical system and issues with the motor controller, Spaugh said the car was working great as race day approached.

The Challenge ran from Oct. 13 to Oct. 20. The route started in Darwin in the Northern Territory and traveled the Stuart Highway to Port Augusta, and then Highway 1 to finish in Adelaide in South Australia.

“There’s a stretch where you go a couple days without a grocery store,” Spaugh said.

The battery fire that ended the Stanford team’s race is still a bit of a mystery. The students know it was caused by a short circuit, but they will have to wait until the car returns in a few months to investigate.

“Then we use it to teach the next generation of team how to solar car. Or how to not solar car,” Spaugh said with a smile. “A big thing in engineering is learning from your mistakes.”

When the 60-pound battery pack caught fire, Spaugh and her teammates pulled it out before the car, which is made of carbon fiber, could ignite.

With the disabled car in a trailer, the team completed the race route.

Spaugh said many teammates had saved money so they could spend more time exploring the region. She and a few others backpacked in New Zealand. She returned to the United States in mid-November.

As she looks ahead at her master’s degree, Spaugh talks a lot about math and physics — concepts that don’t necessarily come easily to her.

But she’s not discouraged by the difficulty.

“You have to go into math and physics with the idea of ‘I am capable of understanding this. I can do this.’ ”

“When you build something from scratch, the first time you take it out things will start breaking. It’s worth it, a trial by fire.”