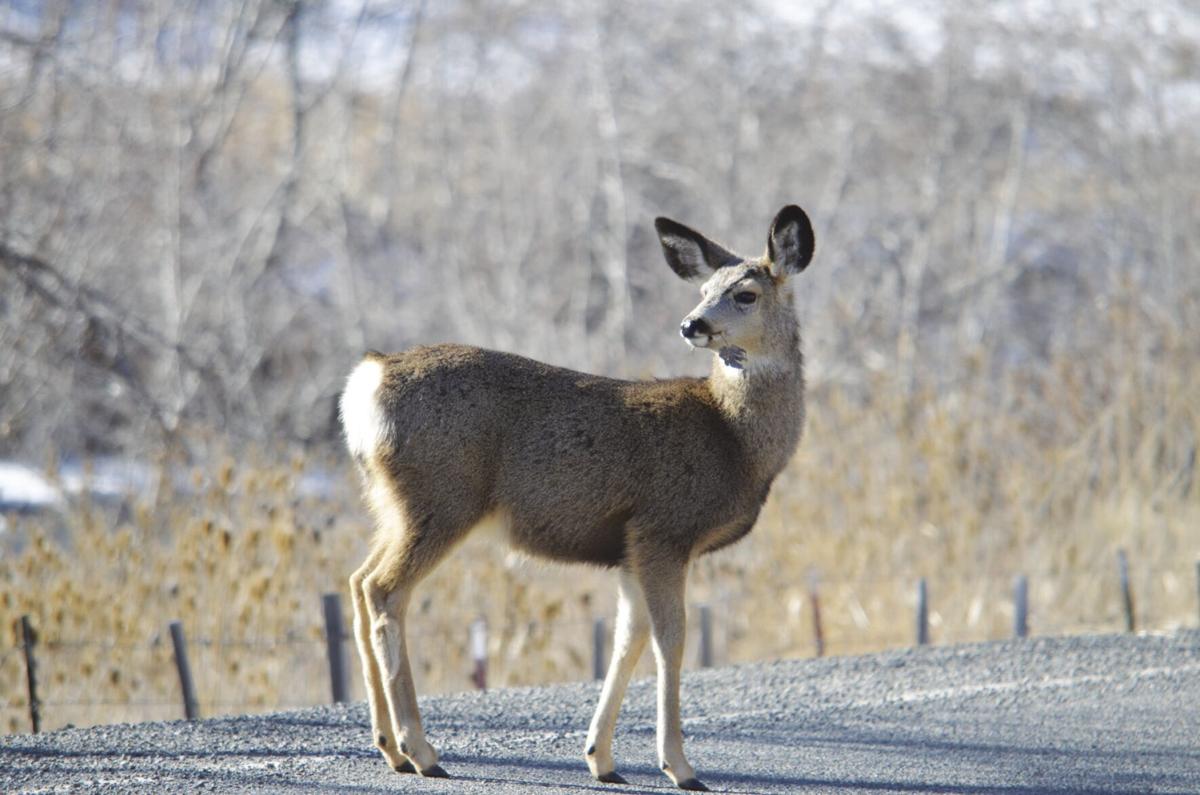 A mule deer stands on the edge of a road in Baker County. 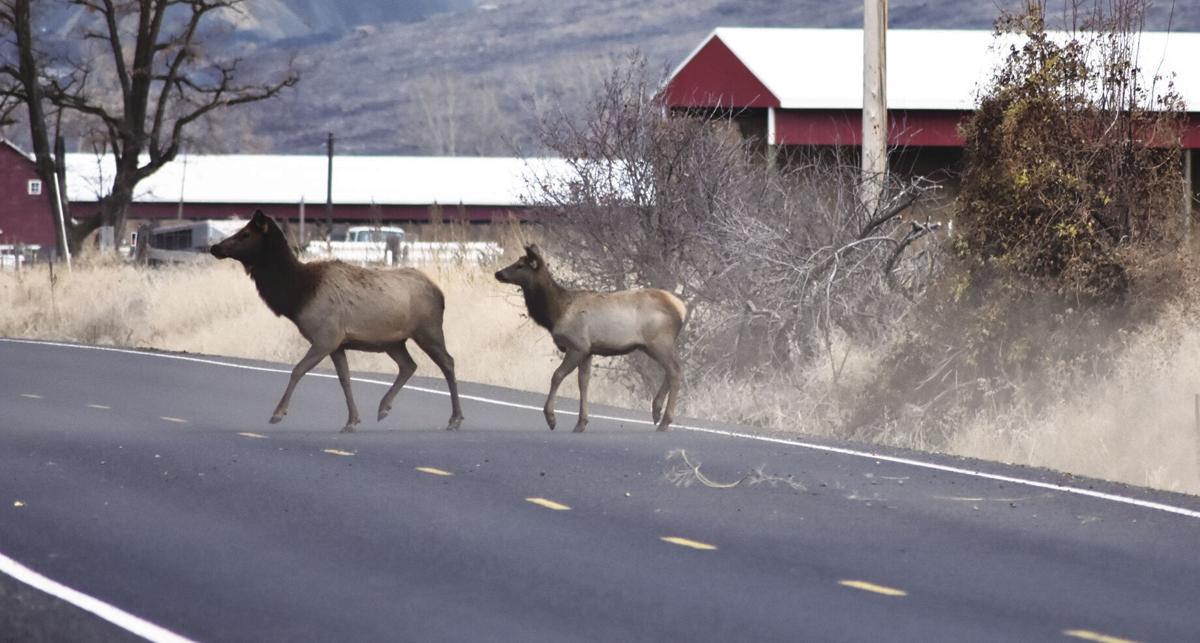 A cow and calf elk cross a highway in Baker County. A state law that took effect Jan. 1, 2019, allows people in certain cases to salvage meat from deer or elk hit by a vehicle.

A mule deer stands on the edge of a road in Baker County.

A cow and calf elk cross a highway in Baker County. A state law that took effect Jan. 1, 2019, allows people in certain cases to salvage meat from deer or elk hit by a vehicle.

Madison Morgan’s pickup truck was busted up, but at least she got some fresh venison out of the deal.

Thomas Taylor is spending quite a bit less on hamburger.

And Ted Schadewitz, though still disappointed at not drawing a deer-hunting tag, was pleased to put meat in his freezer.

This trio of Northeast Oregon residents are among hundreds of Oregonians who have used the state’s 2-year-old roadkill salvage law to turn deer that likely would otherwise have rotted beside a highway into savory meals featuring lean venison.

The rule, which also allows people to salvage elk that were struck by a vehicle, took effect Jan. 1, 2019.

The Oregon Fish and Wildlife Commission adopted those rules after the state Legislature passed Senate Bill 372 in 2017.

Residents have filed more than 2,600 permits — the process is done online, and it’s free — to salvage meat from a deer or elk during the two years the law has been in effect, according to records from the Oregon Department of Fish and Wildlife (ODFW).

The law requires people to fill out the permit within 24 hours of salvaging the deer or elk. The permit includes details such as the person’s name, where and when the animal was salvaged, and whether the person who collected the meat also struck the animal.

It is legal, in certain cases, for a person to salvage a deer or elk that another driver struck, said Brian Ratliff, district wildlife biologist at ODFW’s Baker City office.

That’s lawful so long as the animal is dead and doesn’t have to be put out of its misery with a gunshot.

But if a driver hits and wounds an animal, then has to euthanize it, only the driver can legally salvage the meat, Ratliff said. In those cases the driver is also required to immediately notify law enforcement.

The driver who hits an animal can also salvage the meat if a police officer dispatches a wounded animal.

Ratliff estimated that about half of the animals he has checked were salvaged by the driver of the vehicle.

“It allows people access to a resource,” he said.

Ratliff said the law has added to the workload for himself and his staff, but with an average of a few cases per month, the task isn’t especially time-consuming.

Although people who salvage animals do the permitting online, the law also requires that they bring the animal’s head (and antlers, in the case of bucks and bulls) to an ODFW office within five business days.

That allows ODFW biologists to take a tissue sample that is tested for Chronic Wasting Disease, a potentially devastating affliction that so far has not been confirmed in Oregon.

Ratliff said the law is helpful because the animals brought in for testing are from every part of Oregon, which makes for a broader testing program than would otherwise be possible.

And ODFW doesn’t have to send employees into the field to capture and take samples from animals.

Morgan, 18, who lives near Halfway, was driving her 2010 Toyota Tacoma before dawn on May 16, 2020. She and her brother, Cole Morgan, were heading to the woods to hunt wild turkeys.

Madison Morgan said she was driving at between 30 mph and 40 mph on a road in Pine Valley when a whitetail buck sprang from a patch of brush and clipped the side of her pickup.

“It ran straight out in front of me,” she said.

She said her dad, Albert Morgan, had told her about the roadkill salvage law.

Morgan said her brother shot and killed the deer, which was severely injured.

One hindquarter was damaged by the impact with the pickup and couldn’t be salvaged, but Morgan said the rest of the meat was fine. She estimated she ended up with about 75 pounds of venison.

“Overall it’s a very beneficial law,” Morgan said. “You’re not wasting an animal on the side of the road.”

Although the pickup was insured, Morgan said she and her family joked, while enjoying a meal of venison, that “this was the most expensive deer we’ve ever eaten.”

Ted Schadewitz sees quite a few dead deer on the side of the road while driving between Baker City and his home near Hunt Mountain, at the edge of Baker Valley about 12 miles northwest of town.

And since the roadkill salvage law took effect two years ago, he’s stopped to look over a few carcasses.

But none was fresh.

Schadewitz was driving toward Baker City on Pocahontas Road about 10 a.m. when he saw a mule deer doe lying on the side of the road about 2 miles west of town.

Schadewitz, who is a longtime hunter, inspected the deer. He said it had not been dead for long.

He salvaged about 70 pounds of venison from the mature doe, discarding the area, on the animal’s side, where it was struck by the car.

Schadewitz, who was disappointed that he didn’t draw a deer tag last year, said he was happy to be able to put fresh meat in his freezer.

Although he doesn’t drive around looking for carcasses, Schadewitz said he doesn’t exactly have to search.

“We get a lot of roadkill out this way,” he said. “Because of where I live I’ve been waiting for the chance. You’ve got to be there at the right time.”

Ratliff endorses Schadewitz’s precautions in checking a carcass — presuming you’re not the person who hit the animal and don’t know precisely when it died — to be sure the meat has not spoiled.

“Your nose knows,” Ratliff said. “If it doesn’t smell right, don’t salvage it.”

He recommends people examine meat near a bone, where it’s likely to spoil first.

Schadewitz said the online permitting process was straightforward. He thinks the salvage law was a good addition.

“I don’t like to see anything go to waste,” he said.

Thomas Taylor’s first taste of venison salvaged from a roadkilled deer was something of a prank.

Taylor, who grew up in Alabama and has lived in La Grande since 2011, was backpacking with a friend in 2019 at Culver Lake in the Eagle Cap Wilderness.

They were digging in to a dinner of deer backstrap, morel mushrooms, mashed potatoes and fiddlehead ferns when Taylor’s friend remarked: “That’s some roadkill you’re eating.”

But it did pique his curiosity.

Taylor remembered reading a news story about the new salvage law, but he wasn’t familiar with its details.

And he’s never hit a deer himself.

He chuckles when he notes that he works in the auto body industry, and thus has occasion to meet people who have had a collision with a deer or elk.

In the first two cases, Taylor said a friend called and said they had hit a deer.

In the third instance he came across a deer while driving to work on a snowy morning.

That animal was so fresh it was still so warm that no snow had accumulated on its hide, Taylor said.

He said the online permitting process was “easy.”

Taylor, who is an avid hunter, said the salvage law is sensible.

“It’s so stupid, an utter waste for such a wonderful creature to not be used,” he said.