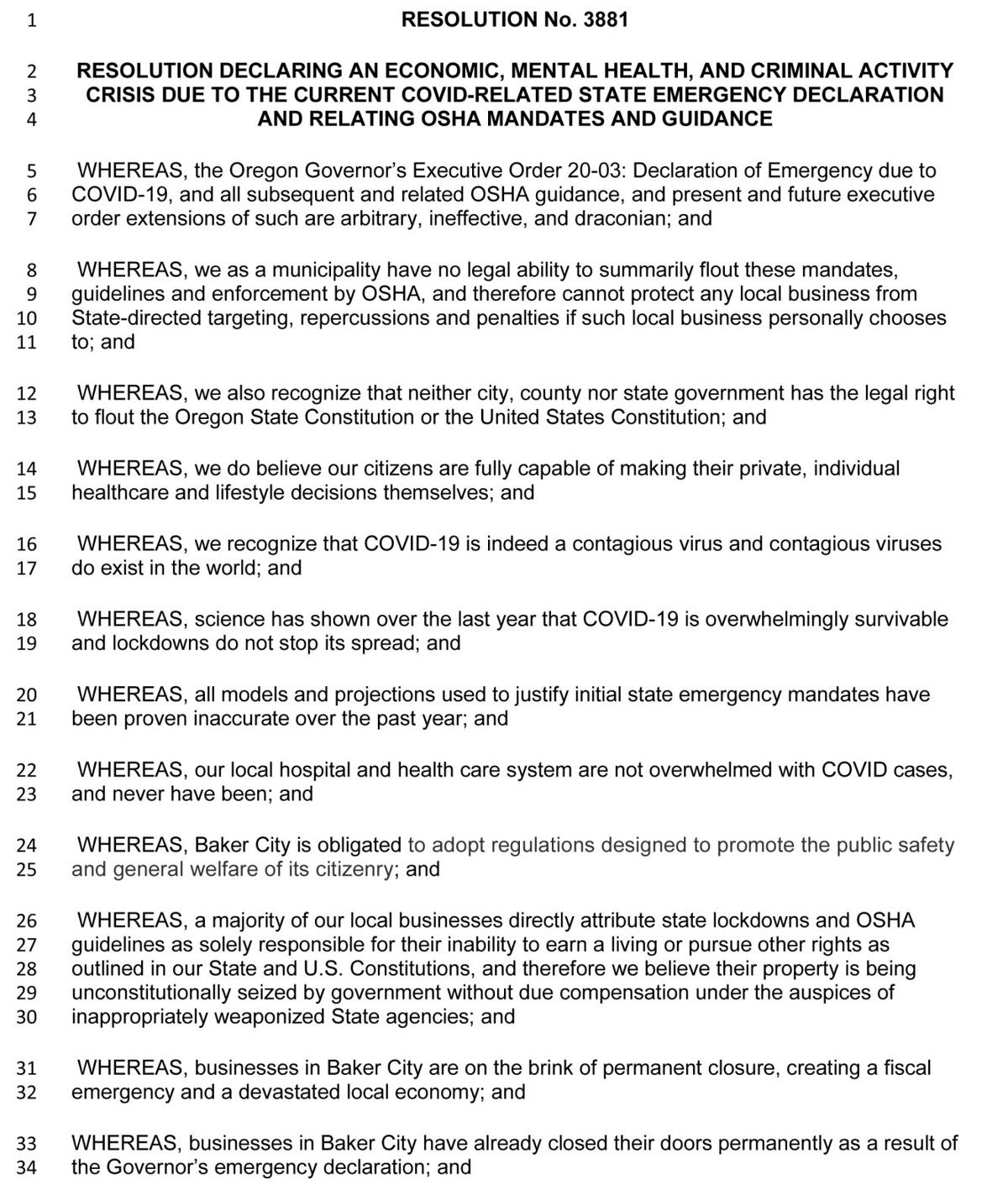 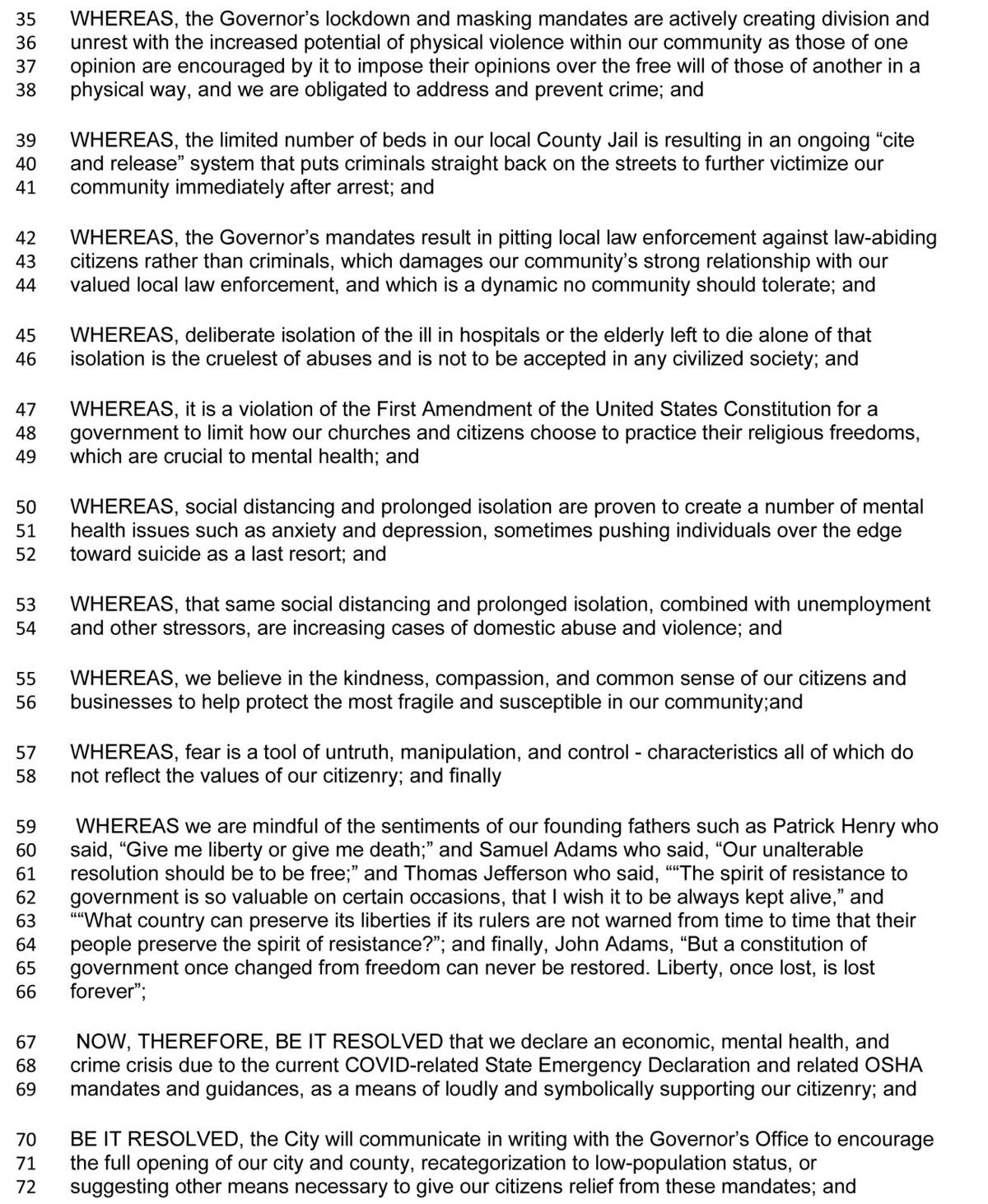 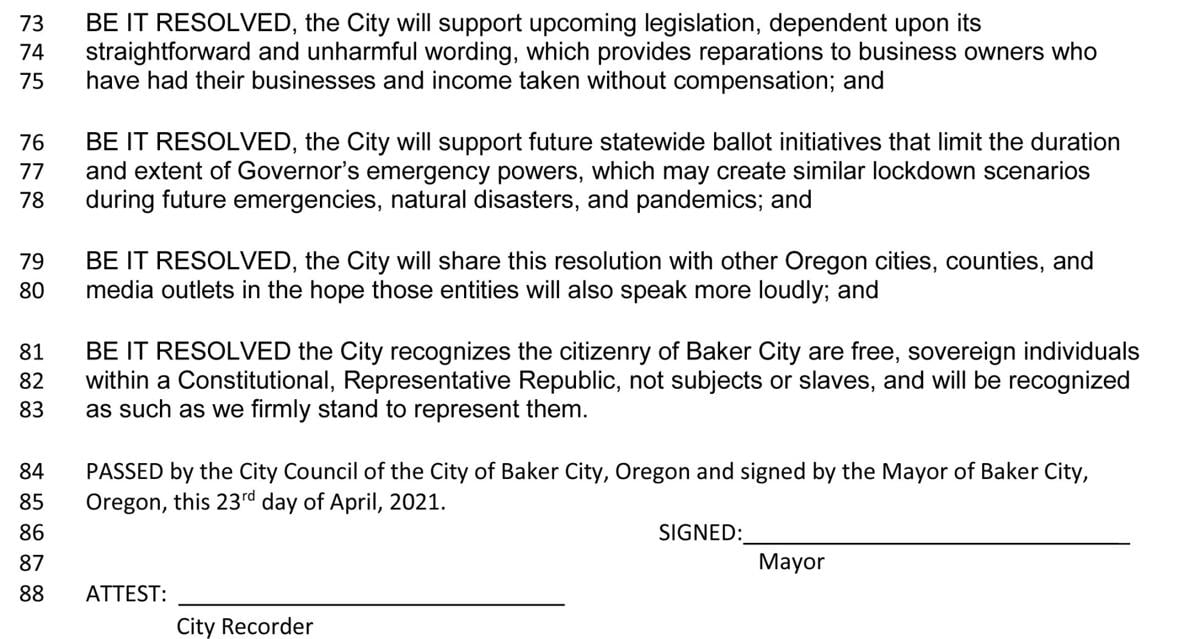 Councilors approved Resolution 3881 by a 5-2 vote on Tuesday evening, March 23.

Mayor Kerry McQuisten and Councilors Joanna Dixon, Lynette Perry, Johnny Waggoner Sr. and Shane Alderson voted in favor of the resolution, which concludes by stating that “the citizenry of Baker City are free, sovereign individuals within a Constitutional, Representative Republic, not subjects or slaves, and will be recognized as such as we firmly stand to represent them.”

Sells said she has concerns about some of the wording in the nearly 2 1/2-page resolution, but was not questioning its purpose.

“There’s just some things in this resolution as it is written that I don’t wholeheartedly agree with and it’s hard for me to stand by and push this forward as is without asking that we do look at it or provide a little bit more time to maybe look at some edits,” Sells said.

Sells mentioned a section near the end of the resolution, which states that the city will “support future statewide ballot initiatives that limit the duration and extent of Governor’s emergency powers ...”

“I don’t see how we can ask that of our city,” Sells said.

Spriet posed a general question to residents who spoke in favor of the resolution during Tuesday’s meeting, asking how they think the resolution can improve the situation in the city related to pandemic restrictions on businesses and activities.

“This isn’t going to change the law,” Spriet said.

He said he wanted to make sure everyone understood the city can’t be responsible for any repercussions that business owners might have if they fail to adhere to state regulations.

“Whether we do this or not, you have that right to open your business regardless of this resolution,” Spriet said.

The second paragraph of the resolution acknowledges that the city “cannot protect any local business from State-directed targeting, repercussions and penalties” that could result from a business flouting state mandates.

Spriet said that although he voted against the resolution, he believes that the governor’s restrictions do not take into account differences between rural and urban parts of the state.

Perry asked for a minor change to a section that in the original version stated that “businesses in Baker City have already closed their doors permanently as a result of the Governor’s emergency declaration.”

Perry said she wanted to make sure the resolution didn’t imply that all businesses had closed.

“Other than that, I think it’s beautifully written,” Perry said.

Mayor Kerry McQuisten, who drafted the resolution in consultation with City Manager Jon Cannon and the city’s attorney, said she believes the resolution brings the community together. McQuisten said she has heard from “hundreds of people” about the resolution and that about 5% were opposed to the Council approving it.

“I want this to pass so that we can stand together with you guys and make a very loud statement that will hopefully spread across the state,” McQuisten said Tuesday. “If we can get the media and other cities and other counties to listen to this and do something similar, that’s our only shot as far as I can see of getting the state and Salem to listen to us.”

Alderson said he believes the resolution is a way for the City Council to make its voice heard.

“And even if it goes unheard, at some point when the roll is called, and people look back at this time, it will stand as a record of what we believe and the unfairness we have received from our own government,” he said.

Whether or not the resolution is persuasive in Salem, Alderson said, its passage will “show our resolve and the resolve that this council has for the citizens.”

Dixon said state mandates, including requirements that business customers wear masks and restrictions on occupancy, have contributed to divisiveness in the city that has lasted for months.

Waggoner said he liked the way the resolution is written, saying it was drafted with passion.

McQuisten said the city has received about 30 letters regarding the resolution, with all but three of the writers favoring its passage.

Jodi Furtney, owner of Charlie’s Ice Cream Parlor, said she supports the resolution. She focused on the resolution’s description of the governor’s orders as “draconian.”

Furtney said her business has been directly affected by state restrictions, which have affected restaurants, and has not written herself a paycheck in 12 months.

“It’s depressing, demoralizing, degrading, and the mental stress is over the top. It’s draconian,” Furtney said.

Tom Hughes discussed the effect the mandates have had on children.

“Experts say we’ve lost at least a generation of our kids to this pandemic,” Hughes said. “It’s not just math, spelling, or reading. It’s the lack of social interaction and forced alienation from their family, their friends, and the public.

Beverly Calder, owner of BELLA Main Street Market, spoke in opposition to the resolution, saying she was concerned when she read the resolution.

Calder, a former city council member, said her first thought was “what’s the point of this?” She described the resolution as negative and inflammatory, and ill-timed given that the county is doing well at vaccinating residents and reducing COVID-19 cases.

“We are almost through this,” Calder said. “What does this resolution do to help us as a community come through?”

She contends there is nothing in the resolution that “holds the promise of bringing the community together, strengthening businesses and business districts.”

“There is nothing here to help,” Calder said. “And that’s what we need from this council. We need you to help us get through this, not talk about how bad it is.”

Matthew Cunningham spoke in favor of the resolution saying he strongly disagrees with mask mandates. Cunningham said he has multiple sclerosis and takes an immunosuppressant medication that makes him more vulnerable to COVID-19.

“14 days to flatten the curve has mutated into 14 months to destroy the Constitution,” Cunningham said. “For the past year, we have continually been asked to surrender our liberties in the name of public safety.”

“I’ve been told by some that wearing masks is virtuous so as to model good behavior for children,” Cunningham said. “What they mean to say is, they have two supreme secular virtues of compliance and conformity. I will give you examples of good compliant people — the North Koreans, the Chinese, the Jews, the Nazis, they were all compliant and they were all forced to conform. Covering your face is nothing more than a diabolical plot to erase the miracle of who God created you as in an attempt to make you nothing more than a body without a soul, a drone, a cypher. It is depersonalizing, demoralizing, and a tool to teach subjugation without reason.”

Shaw, who owns the Inland Cafe, said his sales are down almost $300,000 during the pandemic.

“Yes, I have received PPP grants, it isn’t anywhere near close to that,” Shaw said. “Not to mention the fact that the cost of food is higher because there isn’t people to work because the factories are closed.”

Shaw said he could endure the pandemic if he were allowed to open his restaurant to diners who are comfortable eating inside, rather than being limited to 50% occupancy, as is the case even when Baker County is at the lowest of the state’s four risk levels. For other customers, he said, he would offer curbside pickup and hire a delivery driver.

“It would still cost me less money than losing half my tables,” Shaw said.

Glock said the two-week period to slow the spread of the virus last spring has continued for a year.

“We should be allowed to open our businesses, run them how we want, whether we want to make people wear masks,” said Glock, who owns The Squeaky Stirrup.

Johnson, who runs a management consulting firm in Baker County, is skeptical about whether masks are effective.

“My wife is a nurse. She worked COVID for all winter,” Johnson said. “She wrote a very nice piece, a very nice article. She also does research with doctors. The science is out there; it doesn’t work.”

Johnson said he should have the right to choose whether he wants to wear a mask or not. He said he and others who eschew masks have been relegated to the back of their church.

“We now have six pews full of non-maskers and over a quarter of the church is spread out all over the place that want to wear a mask,” Johnson said. “Why are we segregated in this town? We should be able to sit where we want to sit and do what we want to do.”

Like Cunningham, Johnson cited the Nazi regime in Germany.

“See how they became and what tactics they used to gain power,” he said. “If you really research what happened, we are following that in this country, and especially in this state, to a T.”

“I want this to pass so that we can stand together with you guys and make a very loud statement that will hopefully spread across the state.”