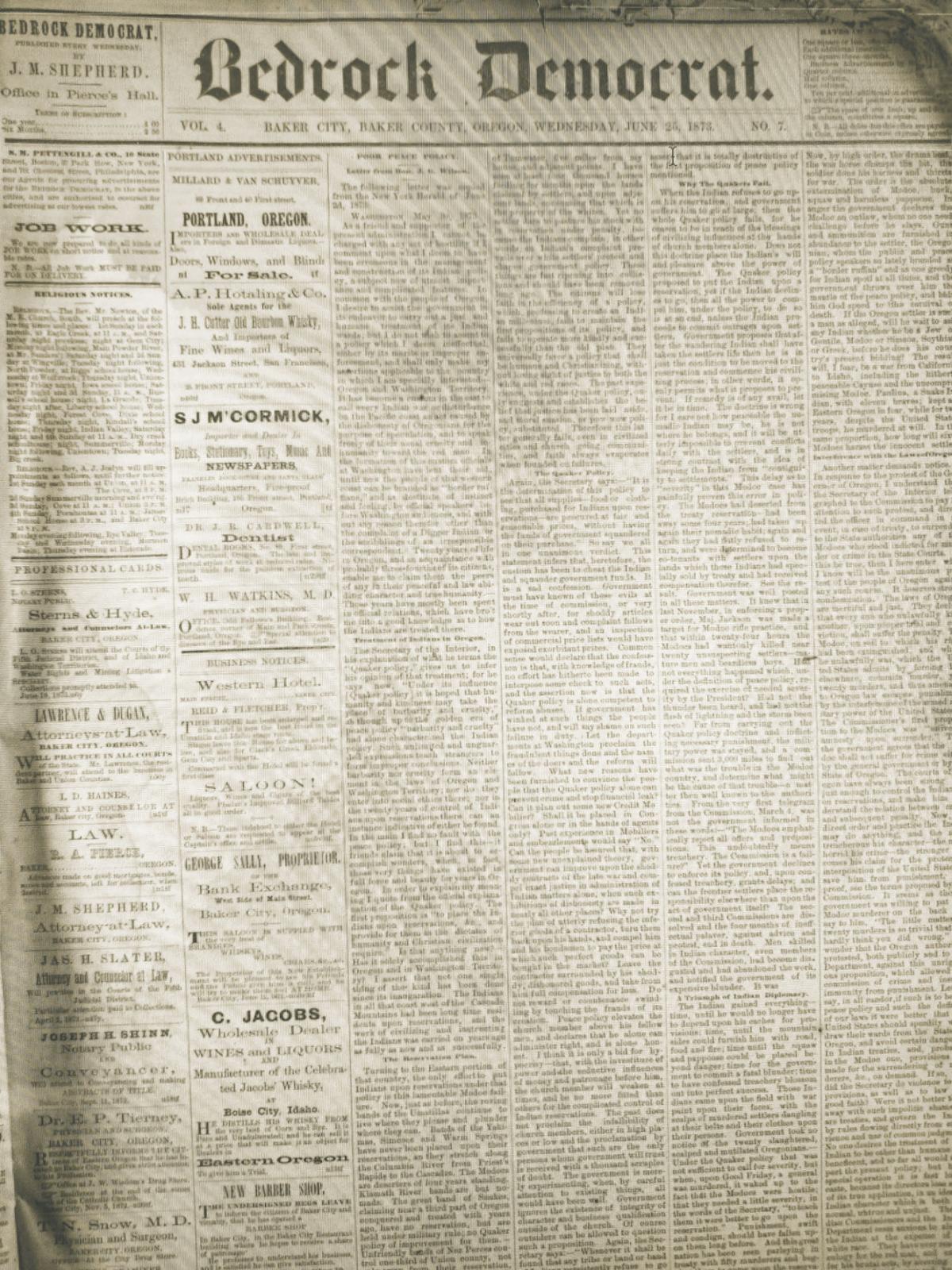 The front page of The Bedrock Democrat newspaper in Baker City from June 25, 1873.

When the first issue of what would become the Baker City Herald leapt off the printing press, no doubt smelling strongly of fresh ink, the Civil War still qualified as a recent event.

Barely five years had elapsed since the war ended.

And since President Abraham Lincoln was assassinated at Ford’s Theater.

That first issue of The Bedrock Democrat, a weekly paper, was published at a time closer to the signing of the Declaration of Independence than to today.

More than half a century closer, in fact.

To dispense with the need for mental mathematics, the date was May 11, 1870.

It was not quite 94 years after America declared its independence.

Baker City was a fledgling town on that May day, having been founded six years earlier and chosen as county seat for the only slightly older Baker County (created on Sept. 22, 1862) just four years before.

Both the county and the city had a direct connection to the Civil War and to the murdered president. Their namesake is Col. Edward Dickinson Baker, Lincoln’s close friend and a U.S. senator for the young state of Oregon, created just 11 years earlier, on Feb. 14, 1859.

Baker was killed at the Battle of Ball’s Bluff in Virginia on Oct. 21, 1861. He was the only sitting member of Congress to die in combat during the Civil War.

A journalist reported that when the president learned of Baker’s death, “Mr. Lincoln, unattended, with bowed head and tears rolling down his furrowed cheeks, his breast heaving, passed through the room. He almost fell as he stepped into the street. We sprang from our seats to render assistance, but he did not fall.”

In one of those examples of coincidental timing that serve as the spicy garnishes to intellectually nourishing but bland accounts of history, Baker died just two days before the event that led to the creation of the county, and later the city, that bear his name. On Oct. 23, 1861, Henry Griffin found flakes of gold in a gulch a few miles southwest of the Powder River Valley. That discovery launched the eastern Oregon gold rush, and spawned the founding of Auburn, the area’s first town. Less than a year later the Oregon Legislature carved Baker County out of Wasco County, which previously covered all of Oregon east of the Cascades. Auburn was the first county seat, but it would relatively soon be overtaken, in size and political clout, by the upstart to the northeast, hard by the Oregon Trail.

Baker City itself wasn’t even incorporated in 1870. That happened four years later. The U.S. Census of 1870 counted 321 residents in the unofficial city (see tan box below). Of those, 29 were Chinese. Baker City, already the county seat despite not being officially incorporated, had fewer residents than both Auburn (442) and Clarksville (342 — the town is along Clarks Creek, a tributary of the Burnt River south of Dooley Mountain).

That situation did not continue.

By the 1880 Census, Baker City’s population had nearly quadrupled and it was, as it remains today, by a wide margin the biggest town in Baker County. Its 1880 population of 1,258 was more than triple that of any other precinct in the county. Auburn, its influence by then well into its waning period, boasted 202 residents, fewer than half compared to the 1870 count.

The period between the 1890 and 1900 U.S. censuses marked the greatest one-decade growth in both Baker City and Baker County, as the city’s and county’s populations more than doubled.

It was also a period when the area’s initial gold rush, which was driven largely by the relatively simple method of gathering gold flakes and the occasional nugget washed into streams, began to be supplanted by the slower, and more expensive, mining of gold deposits buried deep within the mountains.

Baker City’s location along the Powder River and within a mile of the Oregon Trail — at that time still a major thoroughfare — gave it a stability that mining boomtowns such as Auburn, about 10 miles to the southwest, lacked.

In frontier towns newspapers were not as essential, perhaps, as saloons or butchers or blacksmiths.

But some entrepreneur inevitably started a paper, if not so much to fulfill any journalistic obligations as to reap the profits from publishing legally required documents such as mining claims.

The Bedrock Democrat’s original owners were Lewis Linn McArthur and Milton H. Abbott. Both were veteran newspapermen, Abbott having founded the Daily Oregon Herald in Portland.

McArthur, who gave up his share in the Bedrock Democrat in 1872, was elected to the Oregon Supreme Court and later worked as an attorney in Portland.

One of his two sons, Lewis A. McArthur, was the first compiler of “Oregon Geographic Names,” a tradition carried on today by other relatives.

Jesse M. Shepherd bought the Bedrock Democrat in 1872 and operated it for eight years before selling the publication to the Bedrock Publishing Company.

The paper’s editors were J.T. Donnelly and Ira B. Bowen, the latter one of Baker City’s more prominent early residents.

Bowen bought the paper in 1887, changed its name to the Daily Morning Democrat and began publishing daily. Five years later he dropped the “Daily” from the title, although he continued to publish the paper every morning except Monday.

Another daily paper, the Herald, changed its name to the Baker City Herald — the first appearance of that name in a local publication — in 1900 under the ownership of H.F. Cassidy.

Later that year Letson Balleit, who was involved with the White Swan mine several miles east of town near Virtue Flat, bought the newspaper.

The publication, a daily that was distributed in the evening, went through multiple ownership changes until, on July 17, 1925, Lucien Arant and Bernard Mainwaring bought the Herald.

Meanwhile at the Morning Democrat, Will H. Evans joined Bowen as a partial owner in 1919, and in 1929 Ernest L. Crockatt bought Bowen’s share.

That same year Ralph H. Mitchell, formerly editor of The Oregonian in Portland, took over complete ownership of the Morning Democrat.

That year Arant and Mainwaring bought the Morning Democrat and merged the two papers to create the Baker Democrat-Herald, which began publishing on Feb. 1, 1929.

The newly renamed publication was an afternoon paper, and so it remained until very recently. Since February 2020 the Herald, in addition to switching to delivery by the U.S. Postal Service, has been distributed to readers on Tuesday, Thursday and Saturday mornings.

On Aug. 1, 1967, the La Grande Publishing Co., controlled by the Robert W. Chandler family of Bend, bought the Democrat-Herald.

Baker Democrat-Herald was the newspaper’s longest-lasting name, at 61 years.

In November 1989, voters decided to revert to the city’s original name — Baker City.

In response to the voters’ decision in 1989, the Democrat-Herald again became the Baker City Herald starting on May 11, 1990, the change coinciding with the newspaper’s 120th birthday.

The Herald changed its publication schedule from weekdays to Monday, Wednesday and Friday in June 2009.

The Baker City Herald continued to publish as part of Western Communications until July 1, 2019, when the company sold the newspaper, along with The Observer, to the EO Media Group.