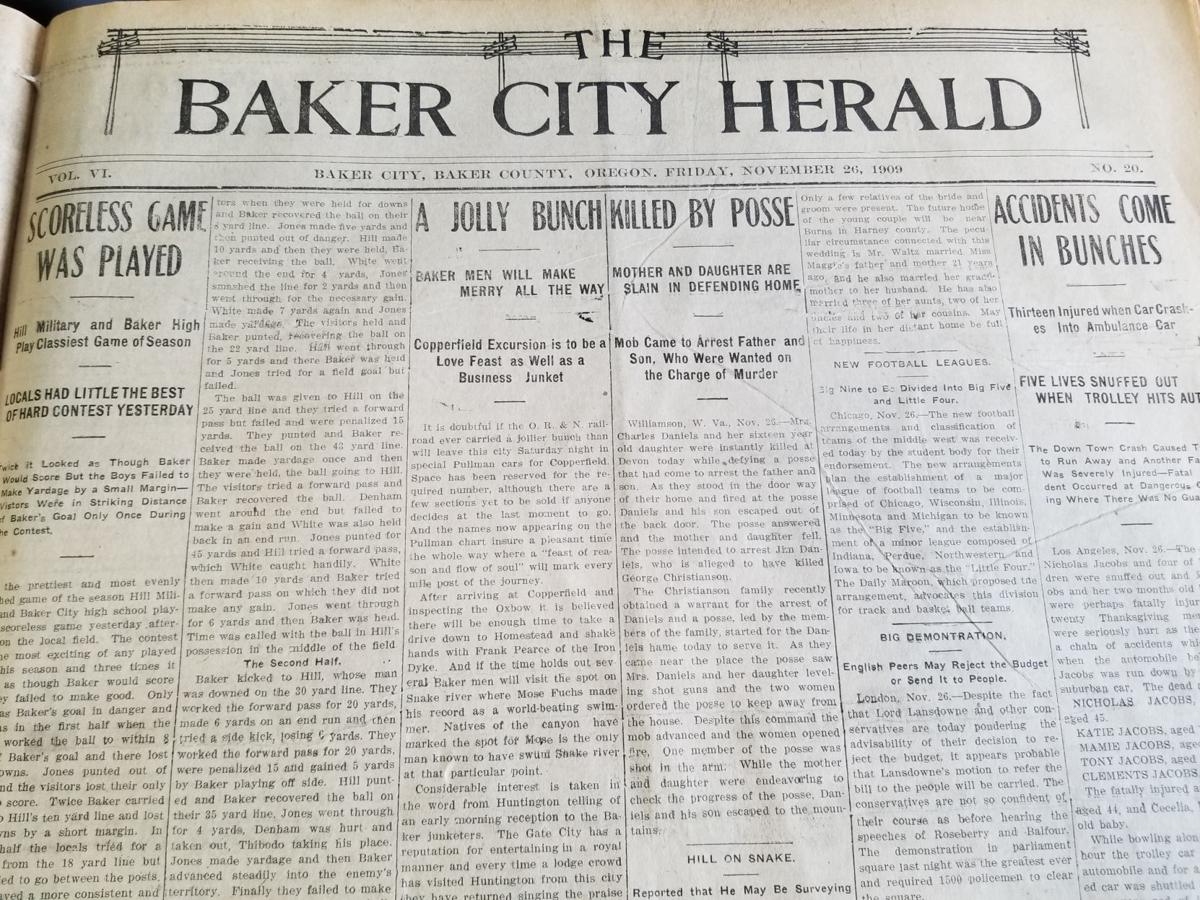 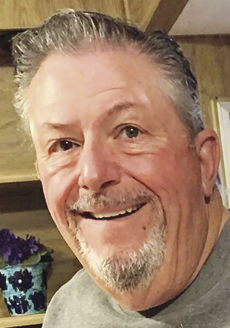 Pondering the weight of the Herald’s history

An editor does light work, in the main.

Maneuvering a mouse and tapping on a keyboard are far more likely to strain a carpal tunnel than to rupture a major muscle.

But when you edit a newspaper as venerable as the Baker City Herald — this week marks our 150th year of publishing — there is a considerable weight to the labors just the same.

Some of this is figurative weight — the weight of history, if you will, of the work of journalists, some of them decades in their graves, who came before.

But some of the burden is as real as an anvil, and about as heavy.

The Herald started covering the news in Baker City and Baker County when the battlefields of the Civil War still bore fresh scars from the conflict, the tattered ground littered with muskets and scraps of grey and blue cloth and other more dreadful detritus.

Over a century and half we’ve published tens of thousands of issues, and the majority of those are preserved in bound volumes.

Most volumes include the issues from a three- or four-month period, and each book is a cumbersome thing to handle, being both large — the dimensions of a full newspaper page — and hefty at up to 10 pounds.

Imagine a shelf lined with dozens of these volumes and you begin to grasp what I’m getting at.

I’ve wrestled with these obstinate hunks of history many times over my nearly 28 years at the Herald. And more than once, when I miscalculated the angle of tilt, I barely avoided setting off the sort of domino effect that, if it doesn’t quite tickle the nearest seismometer, would certainly be capable of doling out some nasty bruises to anyone lacking nimble reflexes.

At the approach of the Herald’s sesquicentennial — a word I don’t believe I ever heard, or read, before 1993, when the Oregon Trail officially celebrated its 150th — I’ve been thinking more about that other type of weight, the type that’s not so tangible as a pile of bound volumes.

I’ve been thinking about the sheer scale of the historical record that those volumes represent.

Births and weddings and graduations and obituaries.

Autumn days when an early storm slathered the football field in slush as the Bulldogs blocked and tackled, winter nights when their sneakers squeaked on the court, spring afternoons when the outfielders squinted against the brilliant blue sky.

The thousands of meetings of city councils and county courts (and more recently, commissions) and irrigation districts and school boards where a Herald reporter dutifully sat, scrawling notes as the workings of small-town government plodded along. Occasionally these gatherings were almost as intense as a murder trial fictionalized by Hollywood, as some issue temporarily inflamed the passions of the populace, spawning a flurry of news stories and editorials and letters to the editor written by residents whose emotions all but leap from the page. More often the topic was some banal bit of budget tinkering, or a resolution involving a matter of little interest.

But the Herald was there to record the proceedings because that’s what we do — because we believe that even the most stultifying decisions made at the public’s behest, and using the public’s dollars, truly matter and must be revealed.

This dogged belief in the relevance of local events is what defines a community newspaper.

And I believe that a newspaper, particularly one as reliable as the Herald has been, becomes a part of the foundation of its community in much the way that its homes and schools and churches do.

And, of course, its people — the most important element.

This is the relationship that persists, spanning the generations. It’s why the Herald’s pages are as likely to feature the artistic kindergartner as the mayor, why the paper considers the octogenarian who collects coins as newsworthy as the American president.

Which is not to say that the Herald’s role hasn’t changed over such a great span of time.

But I think it’s a fine thing that one of the bigger adjustments the paper has made — one that coincidentally happened during my career — is to focus even more keenly on our local residents and institutions.

As sources for state, national and international news have proliferated over the past couple decades — initially the radio and TV and more recently the internet and the ubiquity of smartphones, which enable people to summon those sources at will — the Herald has more than ever concentrated its efforts on what’s happening here.

Compare issues from before 2000 or so and you’ll notice a significant difference in the geographic range of stories in the Herald. For the greater part of the 20th century the paper mixed Baker County stories with articles from around the world. It wasn’t uncommon for a front page to carry little or no news from Baker City or Baker County.

That never happens these days, and I’m glad of it.

Our name, after all, printed at the top of every issue in that medieval font newspapers prefer for their mastheads, is “Baker City Herald.”

It seems to me that if we are to deliver on the implied promise behind that name, then we ought to make sure that the greater part of what you read below that masthead, and on the pages inside, deals with places you see often, and with people whose faces you’re apt to recognize.

Jayson Jacoby started at the Herald as a reporter in 1992. He’s been the editor since December 2007.

Reflections on the Herald from a previous editor

Employees of the Baker Democrat-Herald experienced significant technological changes from the late 1970s through the 1990s.

When Publisher Jack Turner hired me as editor in September 1977, the news staff used typewriters to produce stories and a facsimile reproduction machine to transmit them to The Observer in La Grande, where our stories were re-typed for reproduction in the newspaper. The facsimile machines, precursors to fax machines that would come later, were slow, taking 3 minutes to transmit a page of copy. And the quality of the reproduction was poor, leading to many typographical and spelling errors. Readers frequently criticized the newspaper for its many inaccuracies.

Editors created the layout of each issue using a paper “dummy” or miniature design of the individual pages which, when completed, we also transmitted to the composing department at The Observer. Employees there did their best to follow our guidelines and make up the pages as we instructed. We were responsible for Baker County-related stories and their placement. Editors at The Observer selected and placed state, national and world news in each issue.

Improvements began to occur in about 1978, when our parent company, Western Communications Inc. of Bend, purchased the first computers for the Democrat-Herald and The Observer. The Compugraphic MDT-350 computers featured a larger keyboard and a small 3-by-6-inch screen that allowed the user to write, read and edit the copy. Stories were saved to and retrieved from 5-inch floppy disks, which we erased and reused from day to day.

We improved the method and speed of transmitting the stories to La Grande using an electronic modem for the first time. This new method allowed several stories to be transmitted in the period of time a single story could be sent using the facsimile method. We also created our first electronic page dummies and used them to transmit our proposed layouts.

Our circulation manager served as the courier, driving to The Observer each morning, delivering these items, then returning with the printed newspapers early each afternoon.

The staff continued using these methods into the early 1980s. I resigned as editor in mid-1984 and moved to Western Oregon, where I worked for most of the next five years. Turner rehired me in 1989 and I returned to work at the newspaper for nearly 10 years.

The greatest technological changes occurred in the 1990s, when the newspaper leaped onto the Apple Computer bandwagon that was sweeping the publishing industry. We learned a whole new design concept known by the acronym “WYSIWYG” or “what you see is what you get.” In other words, these new Apple computers with larger screens allowed users to change the words on the screen so they appeared how we wanted them to look on the newspaper page.

Meanwhile, we continued to design the newspaper on paper and send our recommendations to the staff at The Observer. It wasn’t until the mid-1990s that the company purchased larger computer monitors and faster transmitting equipment that allowed our staff to perform complete “pagination” of the newspaper’s pages.

Using the larger monitors and new publishing software, we were able to see an entire newspaper page on our screens and to fill columns with stories, headlines, full-color photographs and captions just as they would appear in the final product.