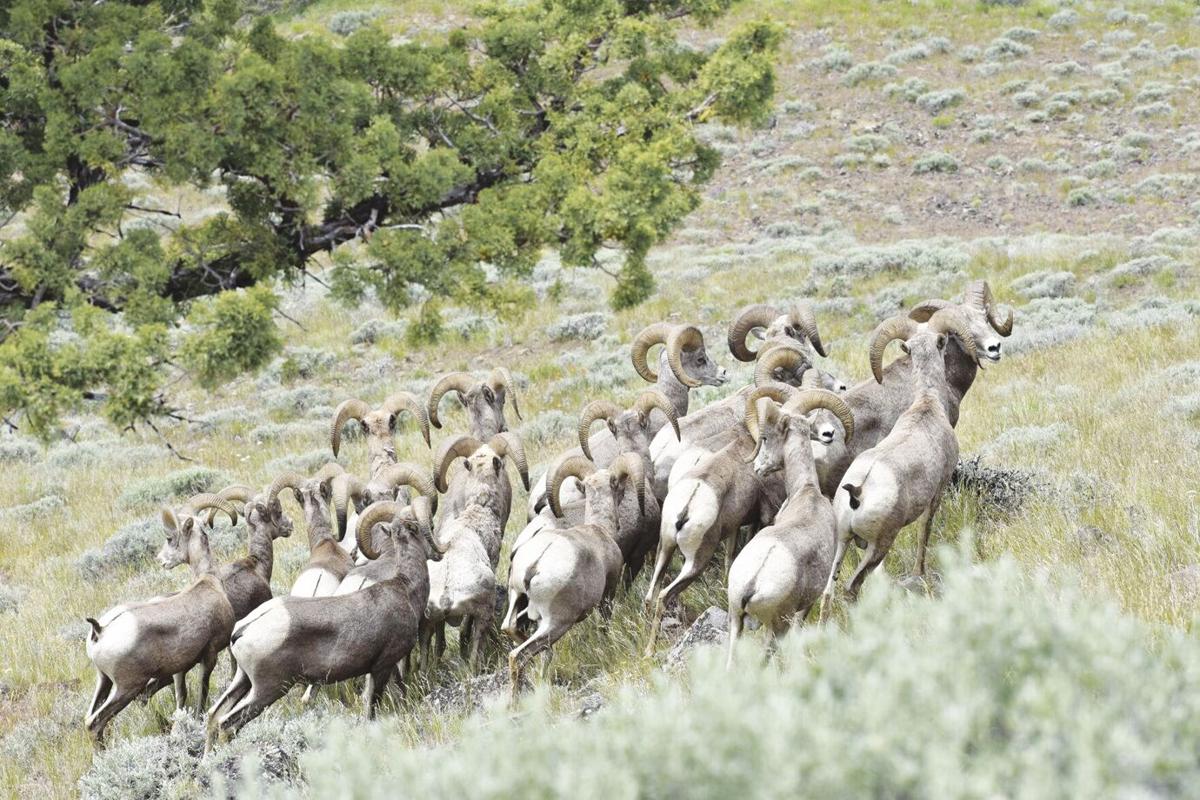 A group of bighorn rams photographed on June 20, 2020, in the Lookout Mountain unit in eastern Baker County. 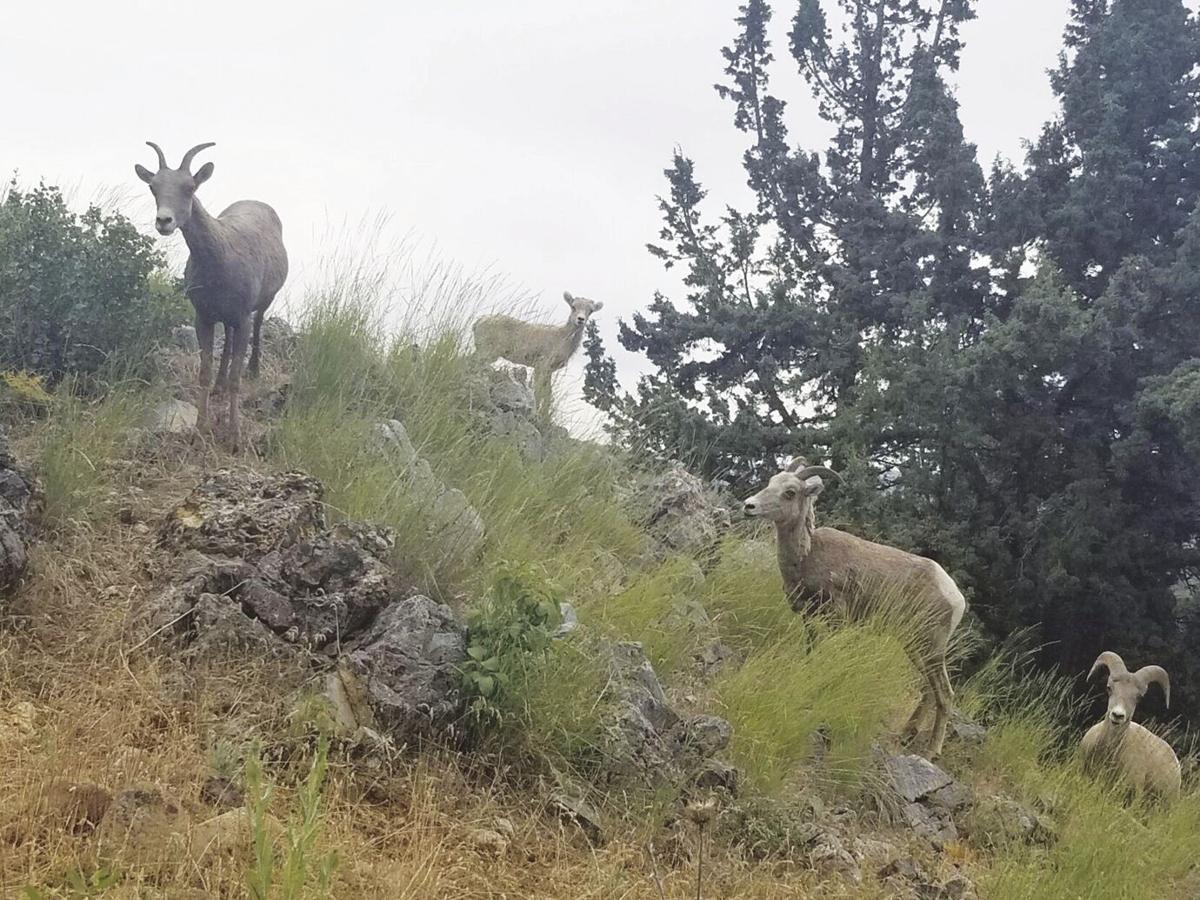 A group of bighorn sheep, including a lamb, in the Lookout Mountain unit in eastern Baker County on June 20, 2020. A state wildlife biologist said it’s likely that no lambs born in 2020 survived an outbreak of pneumonia caused by a bacterial strain.

A group of bighorn rams photographed on June 20, 2020, in the Lookout Mountain unit in eastern Baker County.

A group of bighorn sheep, including a lamb, in the Lookout Mountain unit in eastern Baker County on June 20, 2020. A state wildlife biologist said it’s likely that no lambs born in 2020 survived an outbreak of pneumonia caused by a bacterial strain.

A bacterial infection that has killed more than 100 bighorn sheep in Baker County’s biggest herd over the past year and a half, including the entire 2020 crop of lambs, might be waning.

The next several months will be crucial, but Brian Ratliff, the state wildlife biologist who has been monitoring the Lookout Mountain bighorn herd in the county’s eastern edge, said there’s reason for optimism.

The most promising sign right now is that biologists haven’t seen any dead lambs from this year’s births, nor any that appear to be sick, said Ratliff, the district wildlife biologist at the Oregon Department of Fish and Wildlife’s (ODFW) Baker City office.

One potentially bad sign is that biologists have also seen ewes without lambs, Ratliff said. It’s not clear whether those ewes didn’t have a lamb this year, or whether they had lambs that died. Lambs can be killed by predators or die as a result of something other than the bacterial infection, he said.

Lambs — which usually are born from late May through mid June — appear to be healthy in both the Lookout Mountain herd and in Baker County’s other bighorn herd, in the Burnt River Canyon south of Interstate 84, which was infected with the same bacteria later in 2020.

Biologists have counted at least 27 lambs in the Lookout Mountain herd — the tally is not complete, he said — and about a dozen in the Burnt River Canyon herd.

Ratliff said he believes about 95% of this year’s lambs in the Lookout Mountain herd have been born.

The situation was dramatically different a year ago.

The herd, which numbered about 400 sheep prior to the bacterial infection, probably produced 65 to 70 lambs in 2020, Ratliff said.

He estimates that at least another 75 adult sheep from the Lookout Mountain herd died last year from pneumonia.

The same strain of Mycoplasma ovipneumoniae bacteria was found in tissue samples from bighorns from both the Lookout Mountain and Burnt River Canyon herds in 2020.

That strain had not been detected in bighorn sheep in Oregon before, Ratliff said.

The outbreak prompted state officials to cancel bighorn sheep hunts in 2020 and 2021 in both units. In the past the state had issued three tags for Lookout Mountain and one for Burnt River Canyon.

During the spring of 2020, biologists found several dead adult bighorns.

Ratliff said bacteria can spread rapidly among lambs as the ewes and lambs tend to form large groups, and even a single sick animal can easily infect the others in the group.

With biologists having seen more than two dozen Lookout Mountain lambs since late May, with none appearing ill, it seems likely that the bacteria is not nearly as prevalent as it was in 2020, Ratliff said.

(Bighorns that have pneumonia cough frequently, and are relatively easy to diagnose.)

Although bighorn sheep are stout animals renowned for their ability to easily traverse some of the state’s toughest terrain, they are quite vulnerable to a variety of bacteria and viruses that cause fatal pneumonia, Ratliff said.

Pneumonia outbreaks have plagued many bighorn herds in Oregon over the past few decades.

“Bighorn sheep are susceptible to a lot of things,” Ratliff said. “They’re not the strongest species out there.”

The 85 or so sheep in the Burnt River Canyon herd are California bighorns.

Both subspecies are susceptible to the same bacteria and viruses, and they can transmit infections between subspecies.

Sheep in the Burnt River Canyon began dying around October 2020, and Ratliff believes sheep from that herd crossed I-84 earlier in the year, mingled with Lookout Mountain bighorns and became ill, then returned and began spreading the bacteria among Burnt River Canyon sheep.

The emphasis for ODFW and its many partners now and in the future is to identify sheep in both herds that are “chronic shedders” of the bacteria, Ratliff said.

He said the state is receiving help, including financial aid to buy tracking collars fitted to sheep and to pay for testing, from the Confederated Tribes of the Umatilla Indian Reservation, as well as the Oregon and national chapters of the Foundation for North American Wild Sheep.

“None of this is cheap,” he said. “There are a lot of people really interested in preserving sheep in the (Lookout Mountain) herd.”

Umatilla tribal members have the legal right to hunt bighorns in the Lookout Mountain unit because it is part of their ancestral hunting grounds.

But Ratliff said that before he could even ask the Tribes in 2020 to temporarily postpone hunting, they did so voluntarily.

Ratliff said other states, including Idaho, that have had pneumonia outbreaks in bighorn sheep herds have found that identifying chronic shedders, and euthanizing them, can be the key to eradicating bacteria or viruses from the herd.

These adult sheep might not be ill, but because they constantly shed the virus or bacteria, they can infect other sheep and prolong the outbreak, he said.

To figure out which sheep are chronic shedders, biologists tranquilize sheep and test their blood for the bacteria.

Two rounds of testing in the Lookout Mountain herd in 2020 give biologists another reason to be optimistic that the current outbreak is past its peak and that the herd could be saved, Ratliff said.

During the first series of tests, conducted from February through May, 88% of sheep tested were infected with the bacteria and capable of spreading the germ, he said.

The second round of tests, done in the fall of 2020, showed that 91% of the approximately 25 tested bighorns had antibodies in their blood showing they had previously been infected with the bacteria.

But just 8% of those sheep were currently infected, and thus shedding bacteria, Ratliff said.

All tested sheep were fitted with tracking collars, which makes it much easier for biologists to find those sheep again and retest them.

That testing is planned for this fall, Ratliff said.

Any sheep that was a chronic shedder in 2020, and is still shedding bacteria in 2021, will be euthanized, he said.

Ratliff said some states have euthanized bighorns after the first test showing they are shedding bacteria, but ODFW officials decided not to do so with the relatively few sheep that were infected in the fall of 2020, in effect giving them a second chance to get rid of the bacteria.

In the Burnt River Canyon herd, which was infected several months later, 61% of sheep tested in March 2021 were carrying the bacteria, Ratliff said.

Based on the significant drop in infection rate among the Lookout Mountain herd in late 2020 compared with early in the year, Ratliff said he hopes the Burnt River Canyon herd will show a similar trend.

Although chronic shedders pose the greatest risk, Ratliff said some adult sheep can also be “intermittent” shedders, meaning they carry the bacteria but shed it only some of the time and so could produce a negative test but still be capable, at times, of infecting other sheep.

Ratliff said biologists don’t know how the Lookout Mountain herd was initially infected with the bacteria.

Mycoplasma ovipneumoniae bacteria are not known to be carried by cattle, but domestic sheep can be infected.

Domestic sheep graze on a public land allotment, overseen by the Bureau of Land Management, in the Lookout Mountain unit, Ratliff said. None of the domestic sheep that graze on that allotment has been tested for the bacteria.

Sheep from two other domestic flocks near Richland, at the north end of the Lookout Mountain unit, were tested in 2020 and none was carrying the Mycoplasma ovipneumoniae bacteria, Ratliff said. A llama owned by a resident along the Snake River Road was also tested, and was also negative for the bacteria.

Ratliff said the strain of bacteria in both Lookout Mountain and Burnt River Canyon herds has not been detected in bighorns in Idaho, which can potentially mingle with Oregon bighorns.