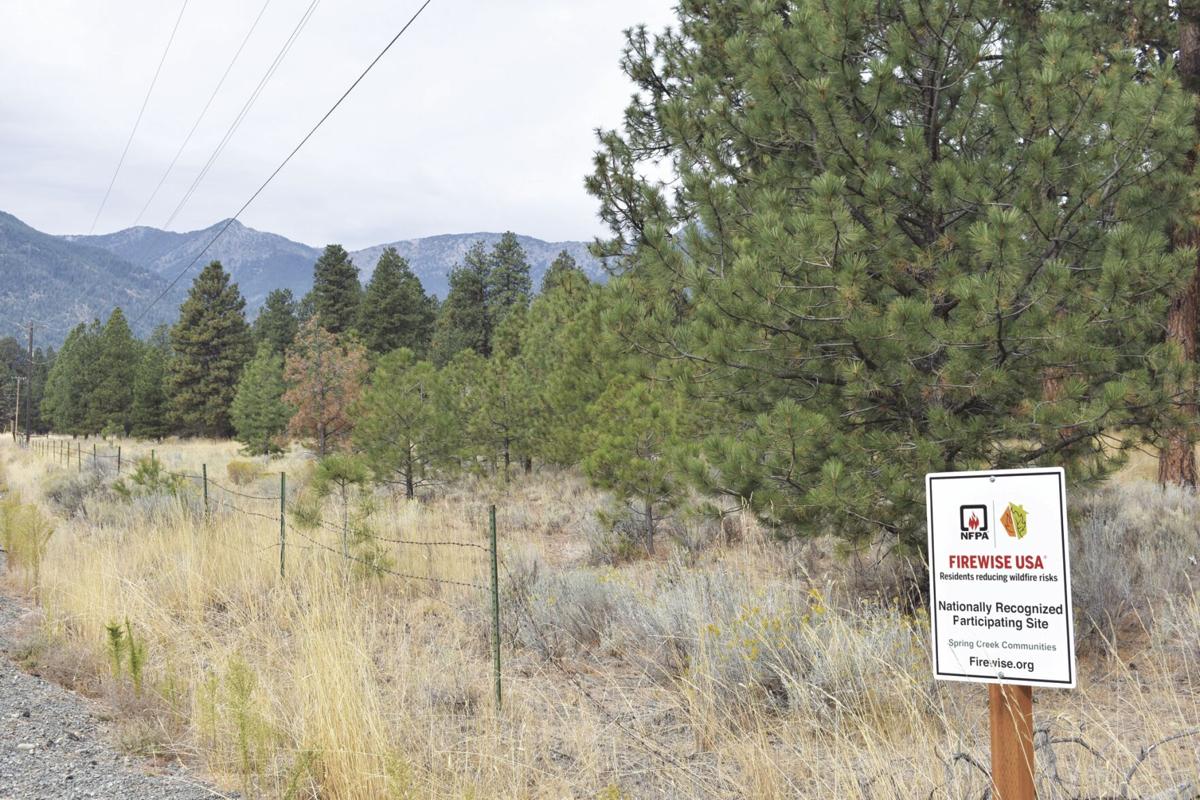 A sign at the intersection of Pocahontas Road and Pine Creek Lane, about 10 miles northwest of Baker City, marks the boundary of the Spring Creek Firewise Community, the first to be designated in Baker County. The area includes about 125 properties in the forested area at the base of the Elkhorn Mountains. Many residents have taken steps to reduce the risk of fires on their properties. 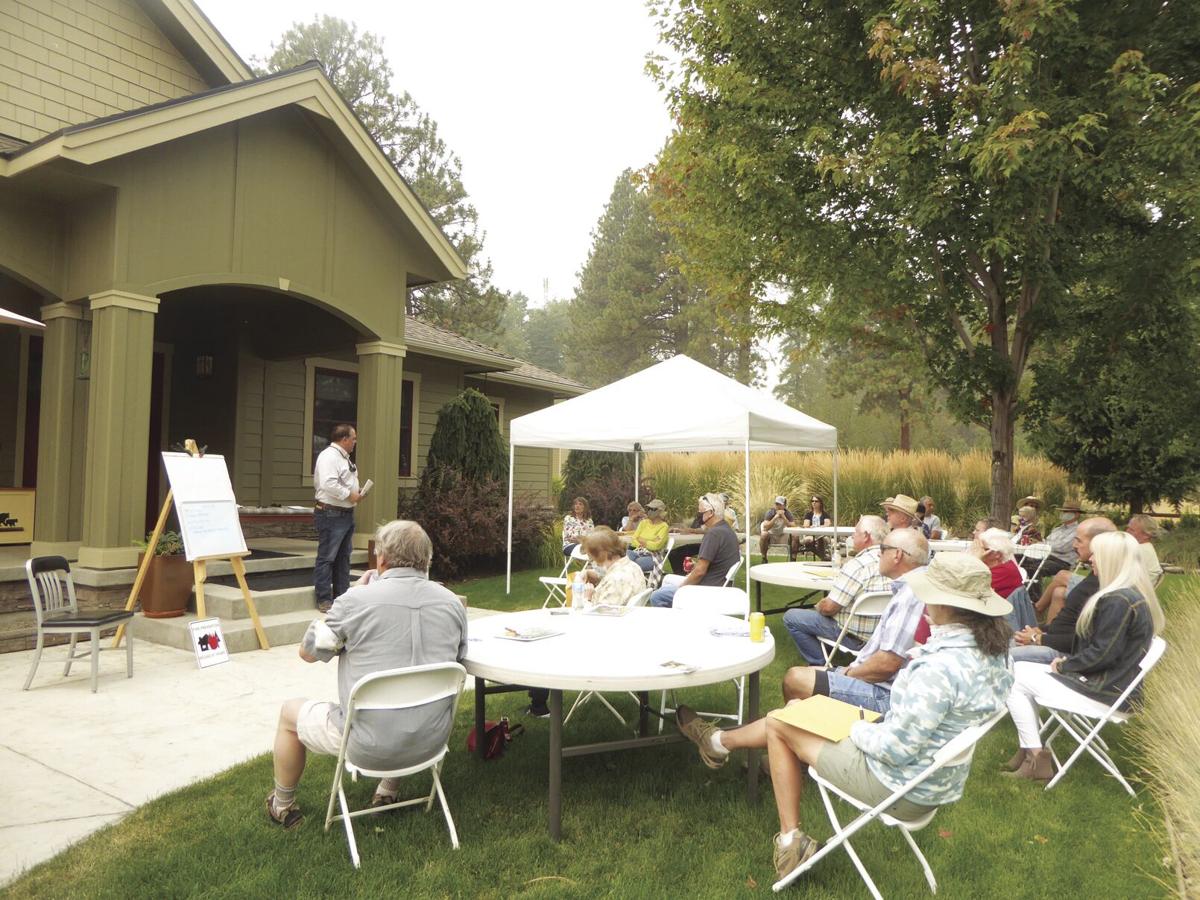 Residents in the Pine Creek area gathered for a barbecue on Sept. 12 at the home of Gayle and Bret Combs to celebrate the designation of Baker County’s first Firewise Community. The area along the base of the Elkhorns includes about 125 properties. 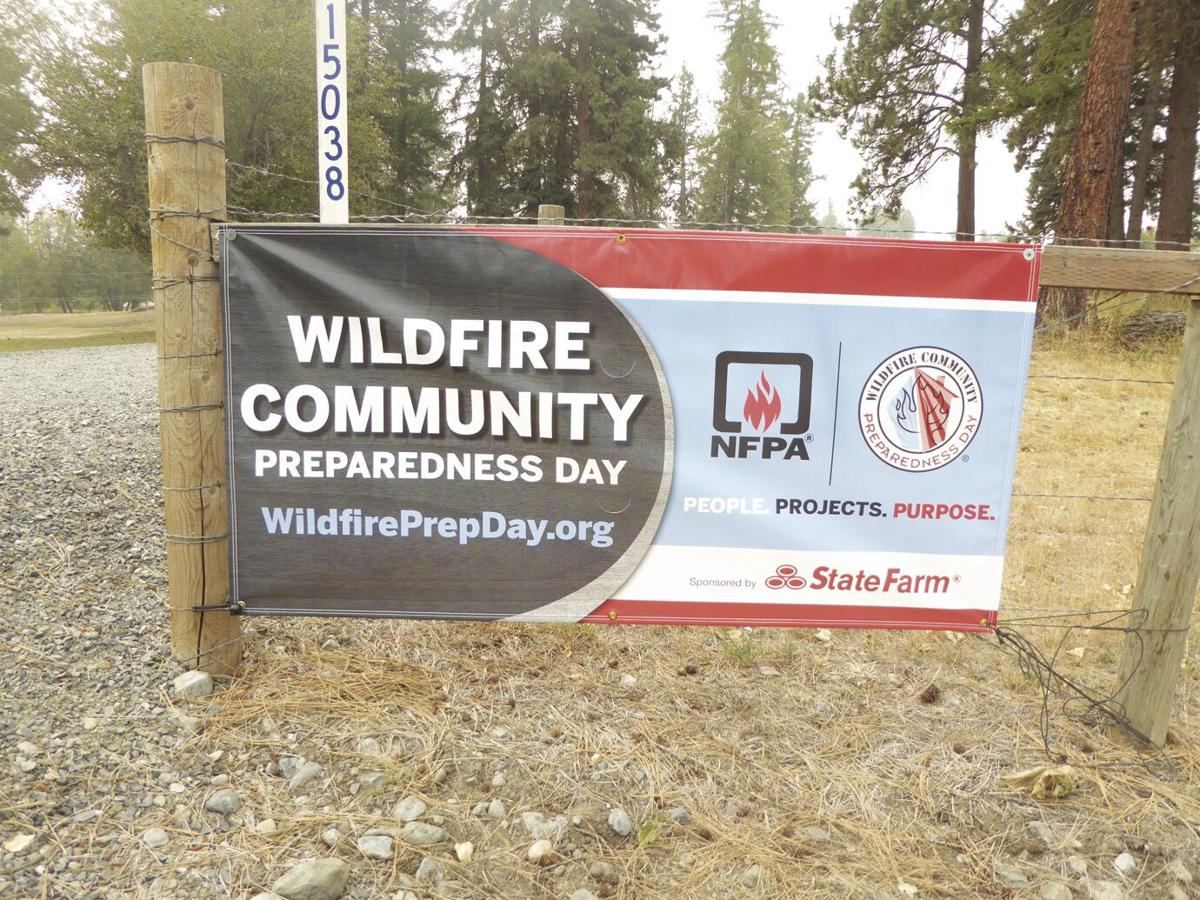 Gayle Combs can see the danger simply by looking out her windows.

Towering ponderosa pines, some of them.

Fields of grass and clumps of shrubs desiccated by a summer of drought.

And only a bit farther away the Elkhorn Mountains loom 5,000 feet above the western edge of Baker Valley, covered with a dense conifer forest.

The dead trees stand out, rusty red among the dark green background.

Combs and her husband, Bret, have lived along Pine Creek Lane for 11 years.

The attributes that brought the couple to this corner of the valley, and that prompted the construction of many dozens of homes nearby in the past few decades, are obvious.

The views could grace the glossy cover of a real estate guide. To the northwest, across the green and tawny patchwork of fecund fields, the Wallowas, snowy for more than half the year, dominate the skyline. At night the lights of Baker City twinkle, a comfortably distant but still convenient 10 miles away.

White-tailed and mule deer, elk and other wildlife range the pine woods that extend more than a mile into the valley, following the courses of Pine, Spring, Goodrich and Gee creeks.

But this idyllic scene is not without potential problems.

The pines and cottonwoods that shade the streams could fuel a wildfire that pushes down from the Elkhorns, propelled by the breezes that refresh so many summer evenings.

Another way to think of it is that the homes the Combses and their neighbors inhabit stand in the natural path of wildfires that periodically swept through for many millennia.

The risk, at least in Oregon, has never been demonstrated so terribly as it was earlier this month when wildfires ravaged several forested canyons on the west side of the Cascades, destroying more than 1,100 homes and killing at least nine people.

But Gayle Combs said she was aware that her property was vulnerable to fire even without the recent tragic reminder.

“It’s always been a concern, for everybody out here,” she said on Thursday.

But neither Combs nor her neighbors was content to accept that risk with complacency.

Over the past year or so they have worked together, with assistance from multiple agencies and officials, to create Baker County’s first Firewise Community.

The Spring Creek Firewise Community’s application was approved by the National Fire Protection Association. The Combses, along with about 40 of their neighbors, celebrated the designation with a barbecue at the couple’s home on Sept. 12.

Considering the twin challenges of COVID-19 and the cloying smoke from those aforementioned fires, Gayle, who is neighborhood coordinator for the Spring Creek project, said she was “very pleased” with the turnout.

But she’s even more excited about how residents in the area, which includes 125 properties ranging from Goodrich Creek north to Ben-Dier Lane, and from Pocahontas Road west to the Elkhorns, have worked together to improve the chances that their homes could survive a blaze.

They’ve used multiple tactics to accomplish that goal, but the basic concept is to create a “defensible space” around homes.

That involves such things as trimming trees so that limbs don’t hang over roofs, keeping grass and shrubs trimmed and watered, and regularly removing combustible pine needles from gutters.

The other key part of the process, Gayle said, is for homeowners to ensure that their driveways are maintained so that fire trucks can get to the homes if flames threaten.

Neither of these strategies is new, said Gary Timm, deputy director of Baker County Emergency Management.

Over the past couple of decades, individual homeowners in wildland-urban interface areas across the county have created defensible spaces and consulted with rural fire districts to make sure they have access.

But the Spring Creek neighborhood is the first to “take the next step and work together” to achieve Firewise Community status, Timm said.

He doesn’t think it will be the last neighborhood to do so, however.

Timm said he has talked with residents in other wildland-urban interface zones in the county, and he’s optimistic that residents elsewhere will follow the Spring Creek group’s lead.

“I plant the seeds and will work with anyone,” Timm said. “But it’s really got to be neighborhood driven.”

He said the devastation that fires wrought in places such as the North Santiam and McKenzie River canyons, and in the towns of Phoenix and Talent near Medford, elevated the issue to a prominence it has never had.

“This summer opened some eyes,” Timm said. “We hate to see tragedy be the motivator.”

Sean Lee, chief of the Baker Rural Fire District, which includes the Spring Creek neighborhood, is also excited about the work that the Combses and their neighbors have done to protect their properties.

‘For the rural fire district that’s going to be a huge benefit, having the residents working together and attempting to put a defensive space around their homes,” Lee said.

He said the Spring Creek area, with its combination of dozens of homes built among the pines, is “our biggest hot spot” of neighborhoods vulnerable to wildfire.

Timm said the areas near the base of the Elkhorns, with their dense forests that haven’t had a major fire in more than a century, are “classic examples of a high-risk wildland-urban interface.”

Combs emphasizes that the Firewise Community program is completely voluntary. Residents in the area don’t have to participate.

But Combs said it’s been gratifying to see how many of her neighbors not only have taken action to help protect their properties, but have also offered to help others with tasks they can’t do by themselves.

“We have a lot of older residents and it’s not easy to climb up on your roof and clean your gutters,” Combs said.

She said residents have helped neighbors cut limbs, and in one case a resident who owns a horse offered to let the animal graze on a neighbor’s property to keep the grass cropped.

Combs said the program focuses on education — showing residents how they can take relatively simple precautions to help protect their homes.

She said some residents in the neighborhood moved from cities where they didn’t have to worry about whether the species of shrubs they planted were unusually flammable, or consider stacking firewood at a safe distance from their home.

Combs said people have been receptive once they realize that the firewise tactics aren’t especially difficult or expensive, and moreover that they needn’t sacrifice the attributes that lured them to the area to protect their properties.

Qualifying as a firewise community makes the Spring Creek neighborhood eligible for grants that can help continue and expand the project, Combs said. That can include spreading the word to residents about ways to create a defensible space, as well as putting on barbecues and other events that raise awareness, especially among newcomers.