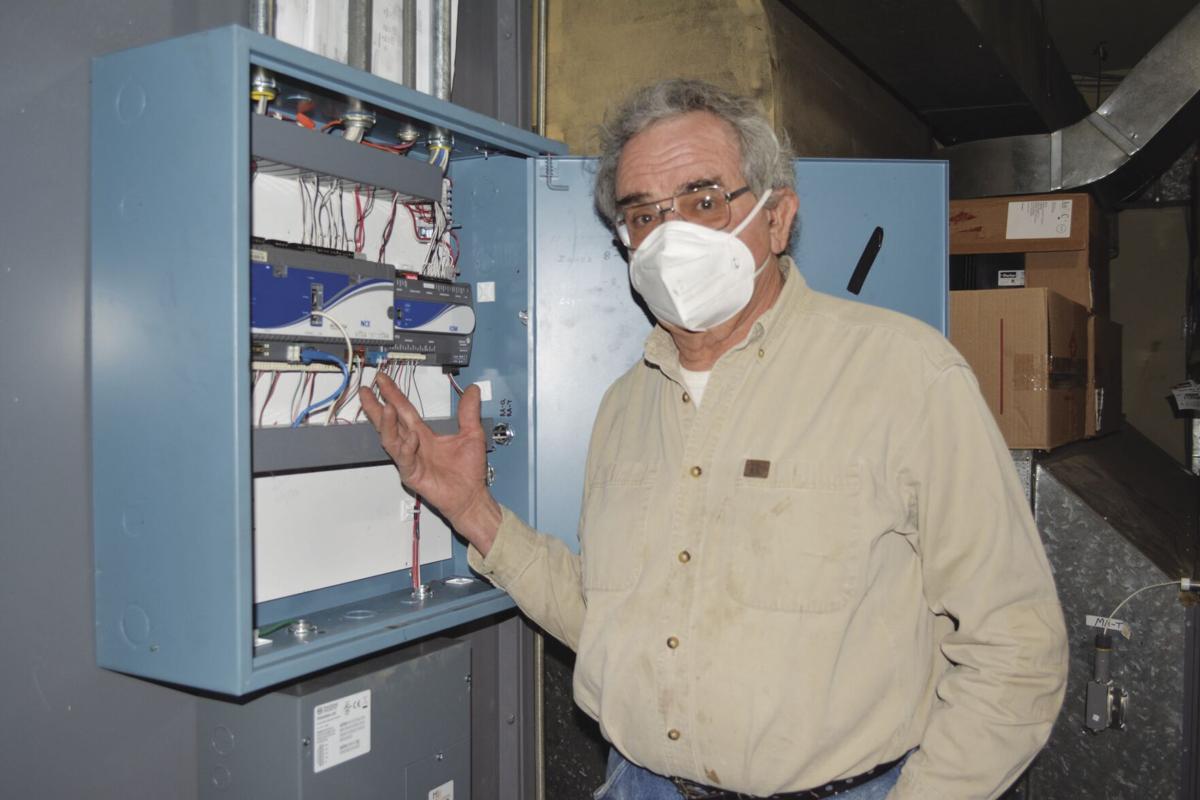 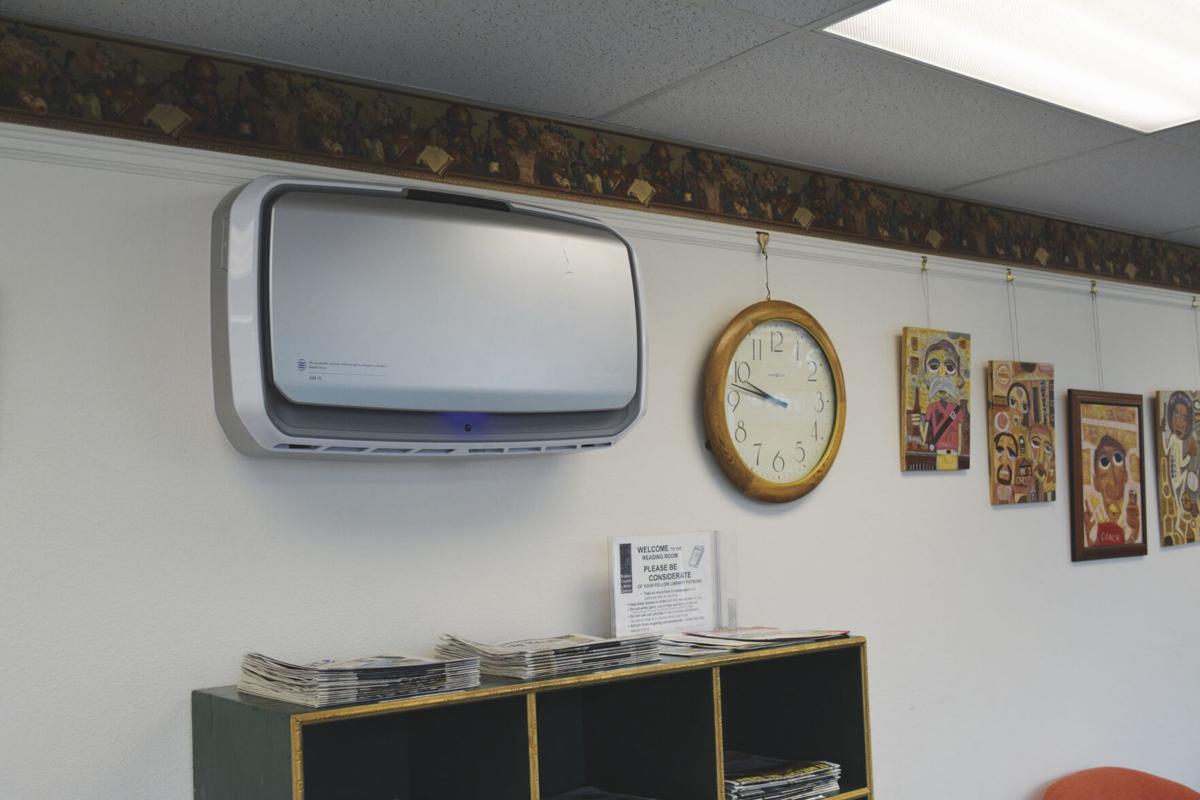 A wall-mounted air purifier at the library in Baker City. 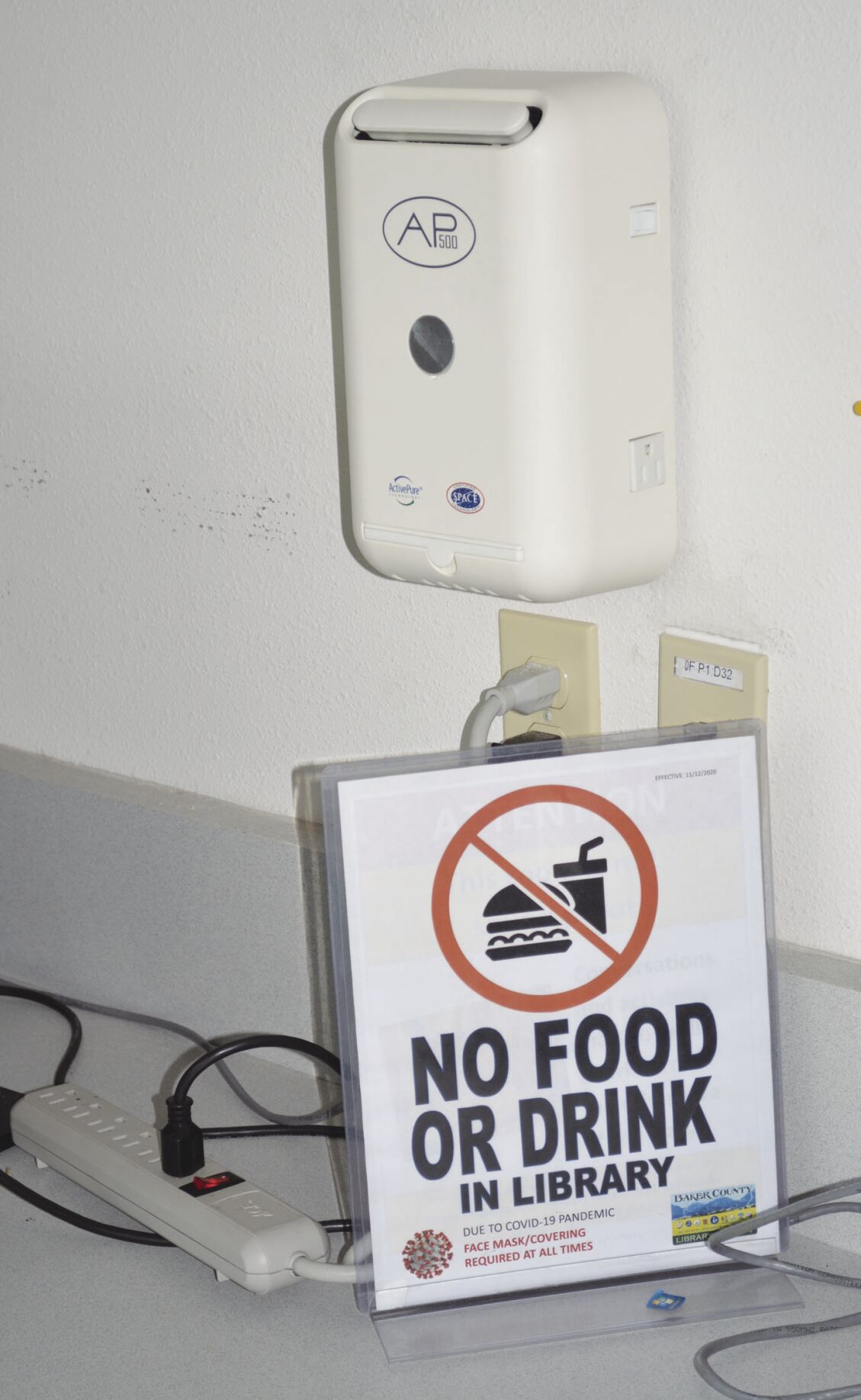 A wall-mounted air purifier at the library in Baker City.

The air inside the Baker County Library District’s main branch in Baker City has never been cleaner, Ed Adamson says, his pride palpable even though most of the particles that are no longer wafting about were never visible to the naked eye.

“We want the public to come in here and feel comfortable,” Adamson, the district’s facilities specialist, said on Thursday morning, March 25, as he stood near the front desk.

Visitor numbers have been severely reduced during the COVID-19 pandemic, but attendance has increased recently.

March is on track to be the library’s busiest month since it reopened in June 2020, but visits are still just 25% or so of the pre-pandemic average of 9,500 per month, said Perry Stokes, the District’s director.

But Adamson said that when the library is again the bustling place it had been, the building at 2400 Resort St. will also be a healthier space to spend time browsing the shelves, reading a book or magazine in a tranquil nook, or attending a meeting in one of the conference rooms.

And although COVID-19 was the impetus for the recent improvements, the benefits to library patrons — and to employees, who spend the most time inside — will persist long after the pandemic has ceased, Adamson said.

The installation of a new, more powerful and reliable air ventilation and filtration system, combined with a network of wall-mounted machines that pull from the air viruses, bacteria, mold and pollen, among other infectious agents and allergens, accomplishes much more than just protecting people from COVID-19, he said.

Adamson said this “triple-redundant” system should reduce the incidence of allergic reactions and curb the spread of a variety of germs.

“The safety of our visitors and staff is our paramount priority,” Stokes said in a press release. “We consider this project to be a great step forward in providing a clean, safe, and healthy environment for our community. I applaud our facilities specialist, Ed Adamson, for his outstanding work of coordinating this project.”

Stokes said the Library District, which received about $180,000 from the 2020 federal CARES Act, spent $42,000 to replace its aging, and obsolete, heating, air-conditioning and ventilation systems, and to install air purifiers — the latter happening both at the Baker City library and at the District’s branches in Haines, Halfway, Huntington, Richland and Sumpter.

The three-level system in the Baker City library starts with the air pulled into the building from outside, Adamson said.

That air is sterilized and filtered much more effectively than the previous system, he said.

The second part of the system is the new ventilation system, which circulates the air more frequently and efficiently and reduces the accumulation of pollutants, Adamson said.

The library’s original system was pneumatic, a series of air tubes that operated a network of solenoids controlling the heating and ventilation ducts.

But the air tubes are prone to pinhole leaks that are hard to detect but which cause the system to either fail or to operate inefficiently.

The new electromechanical system is computer-controlled, and Adamson can operate it with his laptop.

The third part of the system is the network of wall-mounted “bipolar ionization” units, which can kill 99.4% of virus particles in 30 minutes, according to the manufacturer.

Larger units are mounted in areas where larger numbers of people are likely to congregate, Adamson said.

Smaller purifiers are installed in classrooms, bathrooms and other smaller spaces.

He said he was already working on a project to replace the heating, air-conditioning and ventilation control system when the pandemic began.

With the advent of COVID-19, Adamson said it was natural to expand the job to upgrade the building’s air purification and filtration capacities.

“This building is a perfect candidate, and the timing was right,” he said.

Adamson praised the assistance of Brian Zoeller of the Energy Trust of Oregon.

Stokes said the District is applying for financial aid for the project from both Energy Trust of Oregon and from Oregon Trail Electric Cooperative, as the upgrades will reduce the library’s appetite for natural gas and electricity.

Thanks in part to the library’s new air ventilation and purification system, patrons will soon be able to browse the shelves for up to an hour, instead of the 30-minute limit in place for most of the past year. The change takes effect on Monday, March 29.

In addition to the new air purification system, the Library District’s safety committee, in expanding the browsing period, also considered recent declines in COVID-19 cases in Baker County, and the county’s move from moderate to low risk on the state’s four-level system starting Friday, March 26.

The library continues to require visitors to wear masks, sanitize their hands, maintain social distancing, and keep a respectful quiet reading environment inside the building.

Library Director Perry Stokes encourages patrons to reserve materials in advance when possible, and use the library’s drive-thru or curbside services.