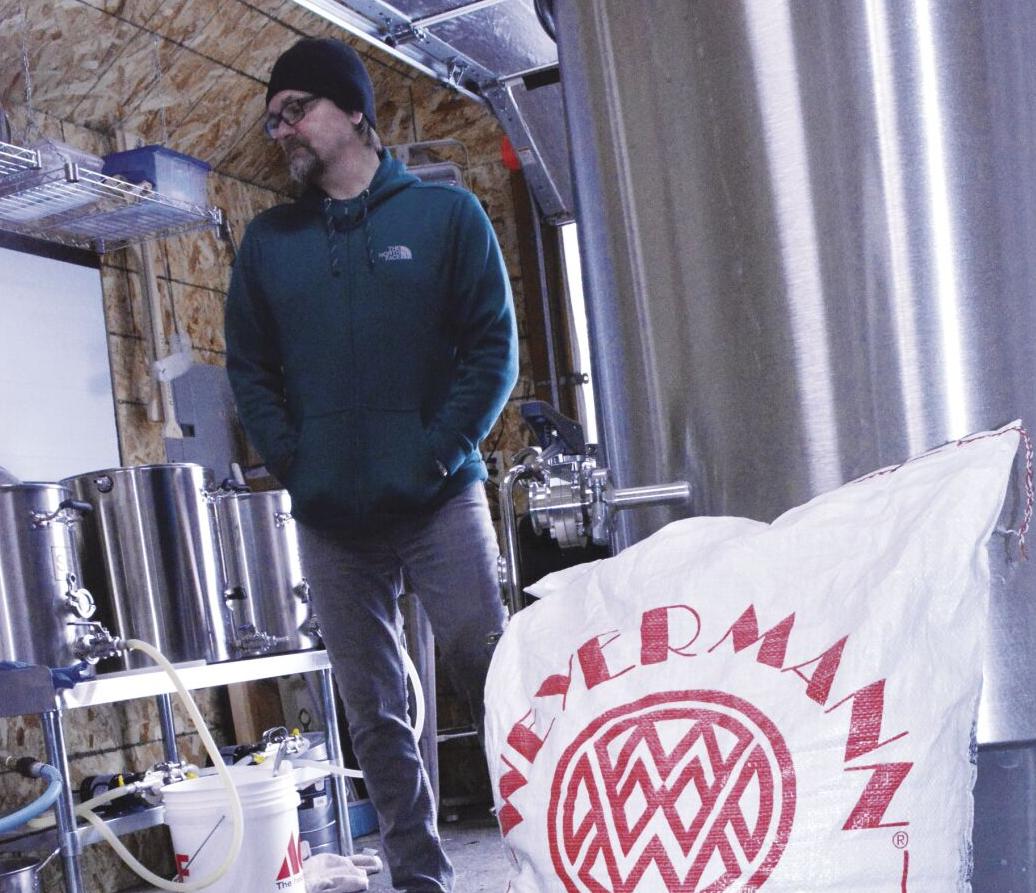 Kevin Multop watches over his latest batch of homebrewed beer in the garage behind his Baker City home. Multop plans to open his North Seven Brewing Co. this spring. 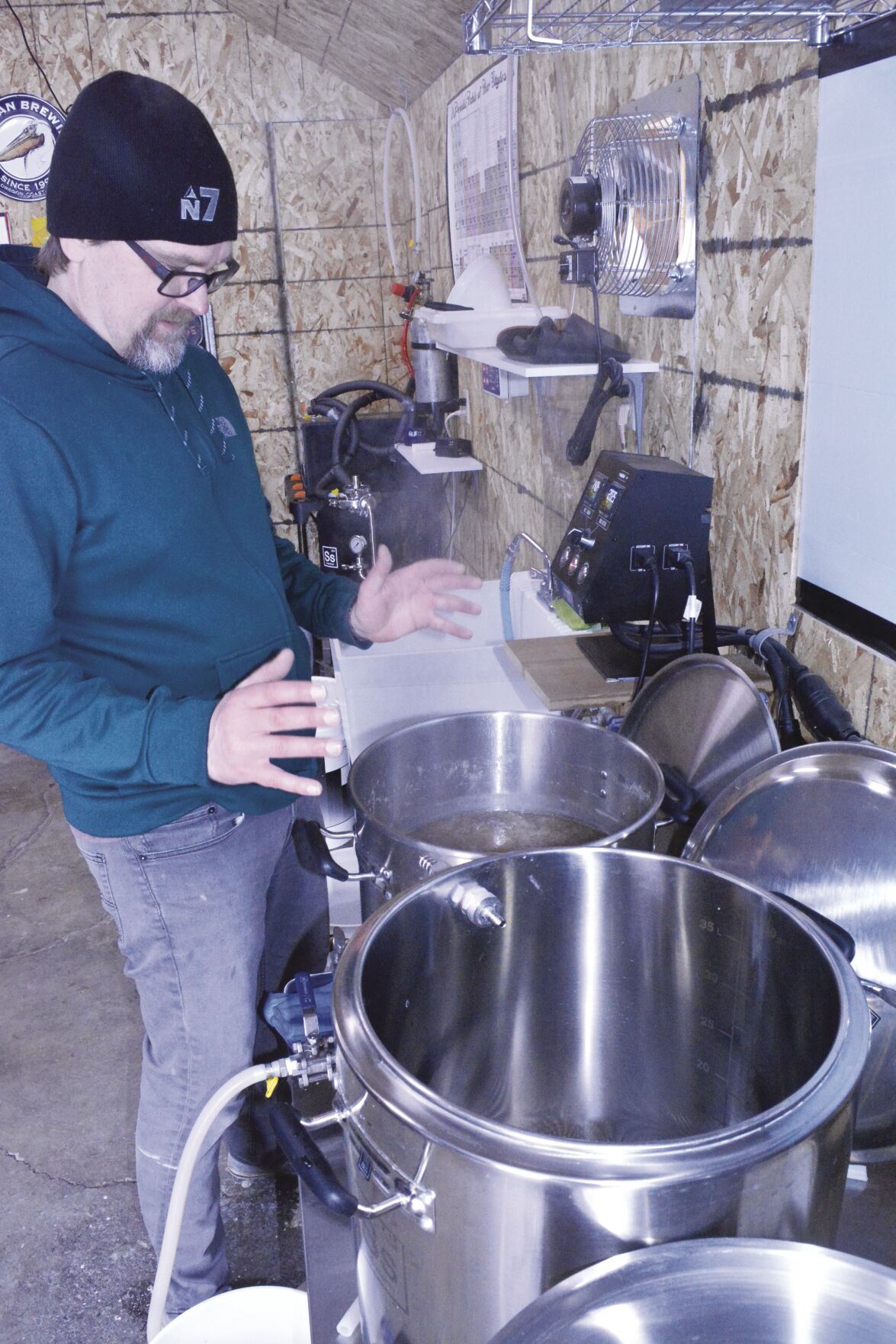 Kevin Multop checks a five-gallon batch of beer brewing in his garage. He will be switching to much larger containers — 60 gallons — when he opens his brewery. 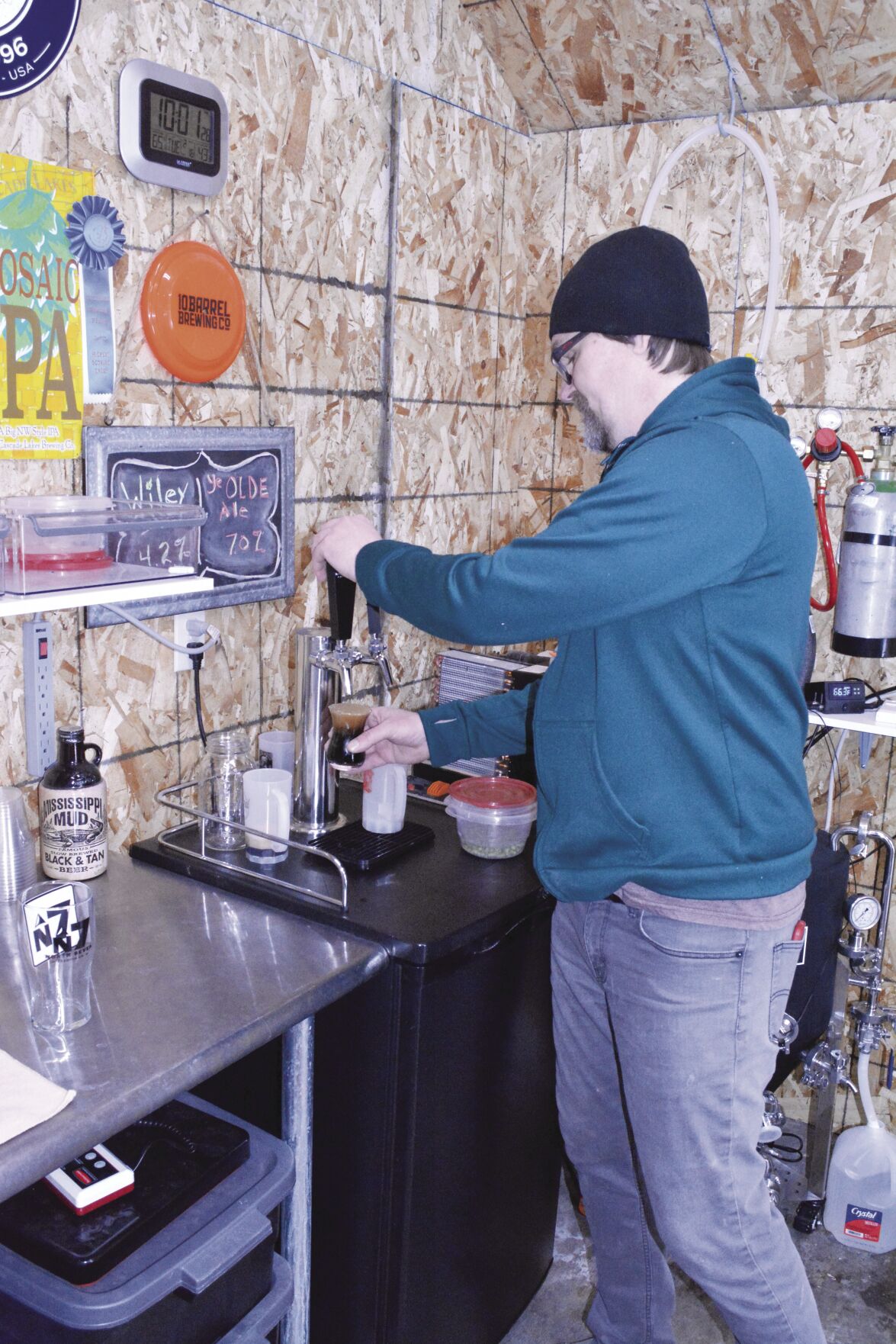 Kevin Multop pours a sample of a dry stout, one of his latest home-brewed creations. 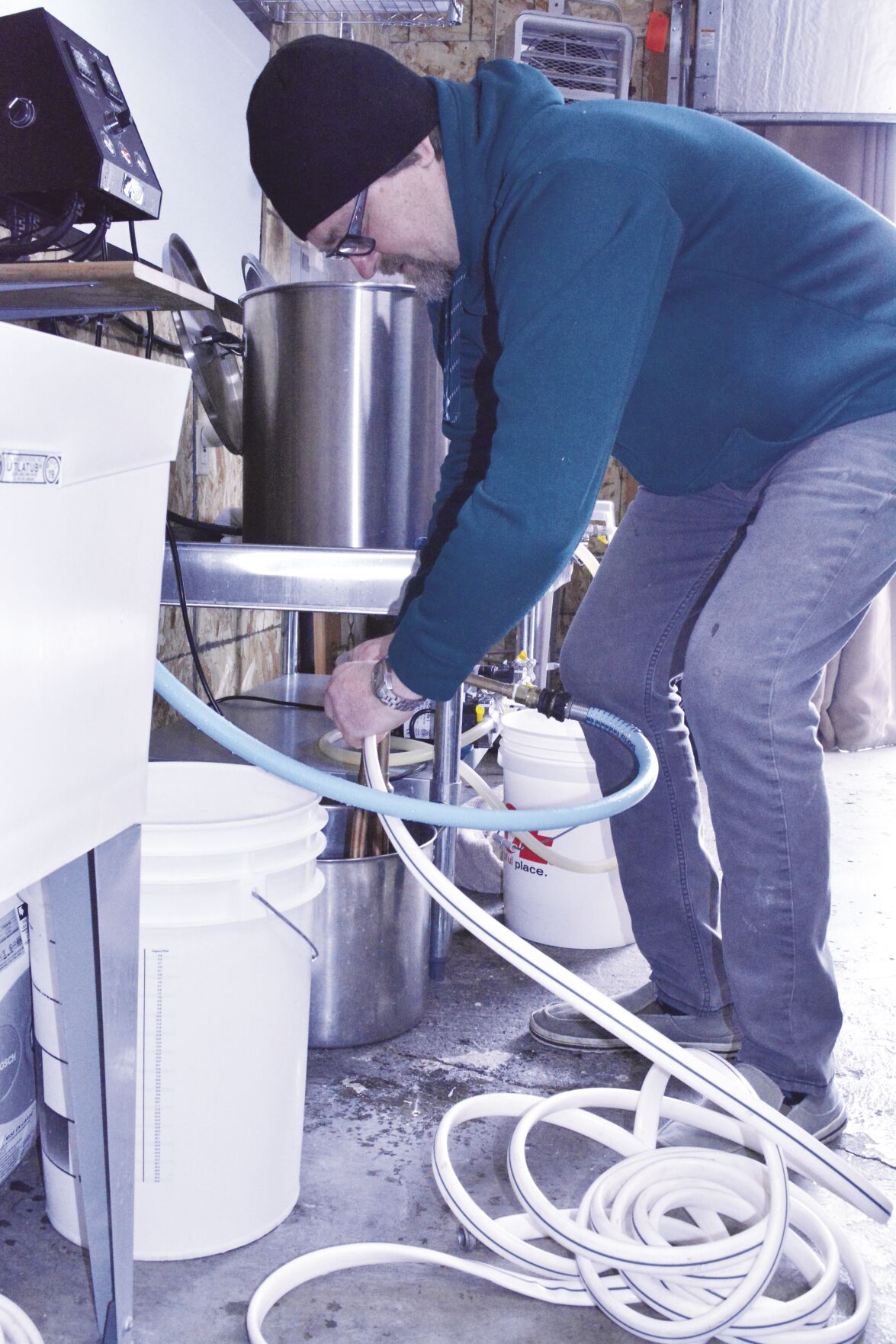 Kevin Multop is brewing beer in his garage as he waits to open his craft brewery, North Seven Brewing Co.

Kevin Multop is standing in the garage behind his Baker City home, peering into a cauldron in which an aromatic liquid is bubbling.

The odor is rich and a bit sweet.

But even if you didn’t recognize the scent you would need the briefest of glances at the garage’s fiberboard walls to offer a confident guess at what Multop is up to on this snowy February morning.

There is a poster-size photo of Multop and his wife, Jessica, each clutching a one-liter mug at a Munich beer garden.

On the opposite wall hangs a chart listing beer styles, a document modeled on the periodic table of elements.

Multop taps the button on a digital display and uncoils a length of garden hose.

The contents of the stainless steel container, burbling along at a rolling boil, are the beginnings of Multop’s latest batch of beer.

He’s been brewing his own ales for several years.

But the biggest items in this garage — both literally, in size, and figuratively, in significance — dominate the center of the space.

This pair of stainless steel vats represents Multop’s ambitious plans for his beermaking.

These vessels, each capable of producing 60 gallons of brew, or 12 times the capacity of his current setup, are the key to Multop’s plan to open North Seven Brewing Co., Baker City’s second brewery, late this spring.

He’s leasing the space in the Pythian Castle, at the corner of First Street and Washington Avenue, the previous site of Earth & Vine and, more recently, the Hen House.

Multop, 49, said he hopes to open by Memorial Day.

His plan is to operate a tap house where he will serve his seven ales, along with cider from Rain Barrel Ciderworks in Baker City, and a menu of simple pub-type foods.

Multop said he’s optimistic that after more than a year of restrictions related to the COVID-19 pandemic, people will be “ready to get out” this summer and enjoy the activities they missed in 2020 — including sipping a craft-brewed ale on a summer evening in downtown Baker City.

Origins of a brewery

But in a positive way, strangely enough.

Multop, who moved to Baker City in the summer of 2019 with the intention of opening a brewery and tap house, had a potential location picked out last winter.

He had friends ready to invest in the project.

But just before the deal closed, it fell through.

But not for long.

“Literally the next week we started the COVID shutdowns,” he said. “That would have been very painful, to launch in the middle of the pandemic.”

Instead, Multop decided to use the virus-caused delay to fine-tune his brewing recipes, meet more local residents, and continue to search for a location for his brewery without the pressure of deadlines.

Waiting another year wasn’t a terrible burden, given that Multop’s interest in starting a brewery dates back several years.

It started, as it does for many craft brewers, with homebrewing.

Although perhaps the origins go back further.

Multop was actually born in Germany, where beer is a matter of national pride. His father was stationed at a U.S. Air Force base at Augsburg, in Bavaria.

Multop moved to Bend in 2003, which was then just becoming one of the centers of Oregon’s burgeoning craft-brewing industry.

“I love craft beer,” he said. “The whole idea and story of craft beer.”

Multop said he toured several breweries in Central Oregon and was fascinated by the brewing process.

But he was leery of trying to make his own.

“I just never thought that I could do that,” he said.

But then he received a fateful email.

It was the sort of email that arrives in droves in inboxes, the sort that almost invariably ends up being dragged to the garbage can icon.

But this message caught Multop’s attention.

It was an offer for a homebrewing kit for $100.

With one click of his mouse, Multop, though he didn’t know it then, set himself on a course that continues today.

He said he decided that, despite the modest financial investment, he would not give up on homebrewing even if his first batch — brewed in buckets in his spare bedroom — was undrinkable.

It was with considerable trepidation that Multop popped the cap on his first bottle — it was either a brown ale or an amber ale; after 300 batches he doesn’t remember which.

What he does remember, vividly, is how surprised he was as the first sip slid down his throat.

“I was surprised at how good it actually tasted,” Multop said. “It was better than I expected.”

The ale was a bit flat — getting the proper level of carbonation can be a challenge — but Multop’s interest was, well, whetted.

He started brewing a five-gallon batch — 40 pints — every other week.

Fortunately Multop had a lot of friends who, as he puts it, “were willing and brave enough to try what I was brewing.”

Over the years Multop, who worked as an administrator at Central Oregon Community College in Bend, honed his technique.

“You keep trying to make that perfect beer,” he said.

The event that Multop describes as a “watershed” in his brewing experience happened in 2016.

He entered the third-annual Battle of the Brews homebrewing competition sponsored by Silver Moon Brewing in Bend.

To Multop’s shock, his brown ale won the contest.

That earned him a tour of the Silver Moon Brewery and a chance to talk to its head brewer, who asked Multop if he was planning to make brewing a profession rather than a pastime.

But during that conversation, amid the scent of hops and malt in an actual brewery, a “seed was planted,” he said.

Multop began to think that perhaps he could start a brewery.

He also, and not coincidentally, began to think about Baker City.

Multop said he and his wife, since moving to Bend, had traveled extensively in Oregon. Baker City was their favorite vacation destination.

“We just love everything Oregon,” he said. “Baker was just the gem in the whole crown for us.”

Part of the place’s appeal, Multop said, is Barley Brown’s, the local brewery that opened in 1998. Owner Tyler Brown and his team of brewers have won dozens of awards at national competitions for their beers over the years.

Two years ago, on what Multop remembers was also a snowy February day, he met Brown at Barley Brown’s Tap House on Main Street.

“He was very gracious and inviting,” Multop said of Brown. “He’s been awesome, he and his team.”

Multop said he and Jessica decided they would move. He left his job at Central Oregon Community College. Jessica got a job as a special education teacher at South Baker Intermediate School.

The couple moved to Baker City during the summer of 2019. That fall, Multop bought the two large fermenters and other professional brewing equipment.

Brown said he welcomed Multop and offered to help him in any way possible.

Brown said collaboration, rather than competition, is the “nature of the brewing business.”

“I look forward to having Kevin as another alternative in town,” Brown said. “It’s one more reason for people to stop in Baker and spend some time.”

Multop said his selection of ales will be somewhat different from Brown’s, including brown and amber ales that emphasize malt flavors rather than hops.

Multop said North Seven’s offerings will include a hoppy India pale ale, however.

What’s in a name?

When he and his wife drove from Bend to Baker City, the left turn off Highway 26 at Austin Junction marked the final leg of the journey.

Multop said one particular sign — bearing the word “North” above the letter “7” — excites him every time he rolls past it.

“When I hit N7, that’s the home stretch,” he said. “The most beautiful stretch. It typifies everything that’s great about this area — the ranching, the history, the scenery, all on that stretch of road. It’s one of the most beautiful in the state.”

Multop believes Baker City has the potential to become one of Oregon’s most popular destinations for beer aficionados.

He points out that besides boasting an “outstanding brewery” in Barley Brown’s, Baker City also has businesses that sell two of the primary ingredients in beer — Tom Hutchison’s Gold Rush Malt, which recently won three awards at an international competition for barley maltsters, and Hop Heaven, which sells hops, the dried flowers of which infuse beer with its distinctive bitter flavor.

Multop said he plans to buy most of his malt from Hutchison, and hops from Ted Hausotter, who owns Hop Heaven and is an accomplished homebrewer and master beer judge.

“In this town there’s all the right ingredients,” Multop said.

He said beer aficionados often are interested in “culinary tourism” — sampling all manner of locally produced food and drinks.

Multop said he plans to hire part-time employees at his tap house. His son, Kilen, 26, who lives in Nampa, Idaho, is also a partner in North Seven Brewing Co.

“You keep trying to make the perfect beer.”