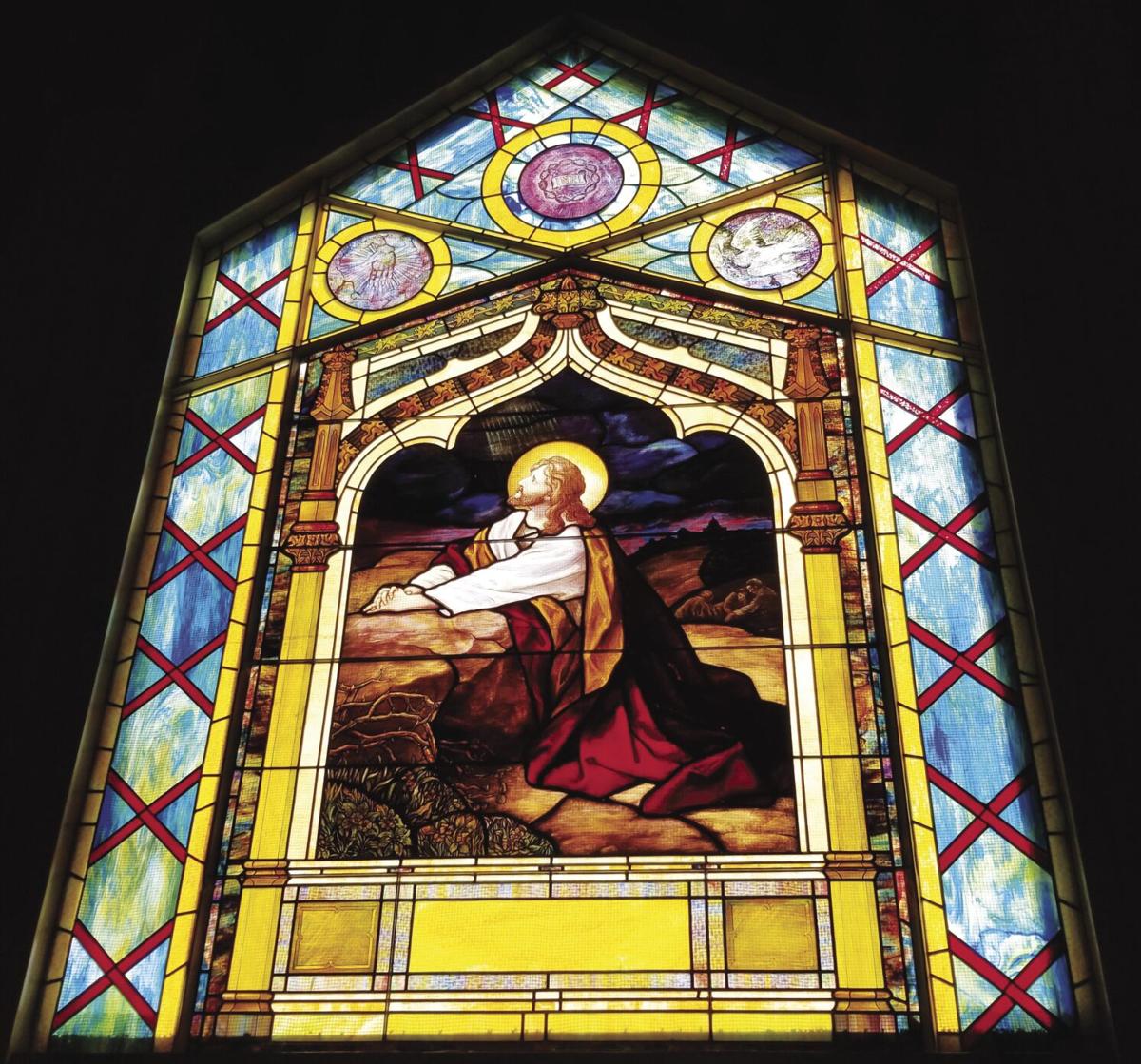 The stained glass window is the only part of the original First Lutheran Church that remains. The original church, built in 1921, was remodeled about 30 years later. 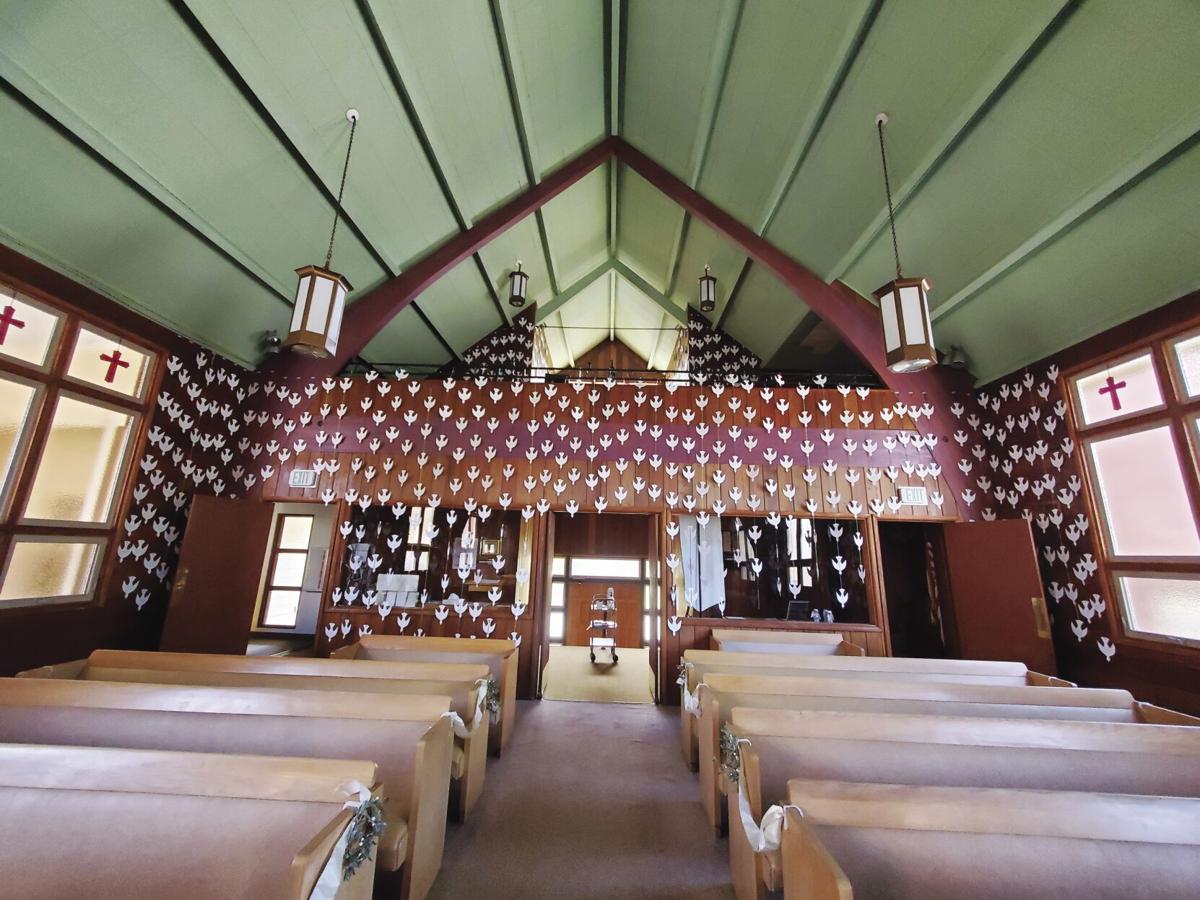 A total of 1,200 white paper doves decorate the interior of First Lutheran Church in Baker City. Each dove represents a person who was baptized at the church since it opened in 1921. 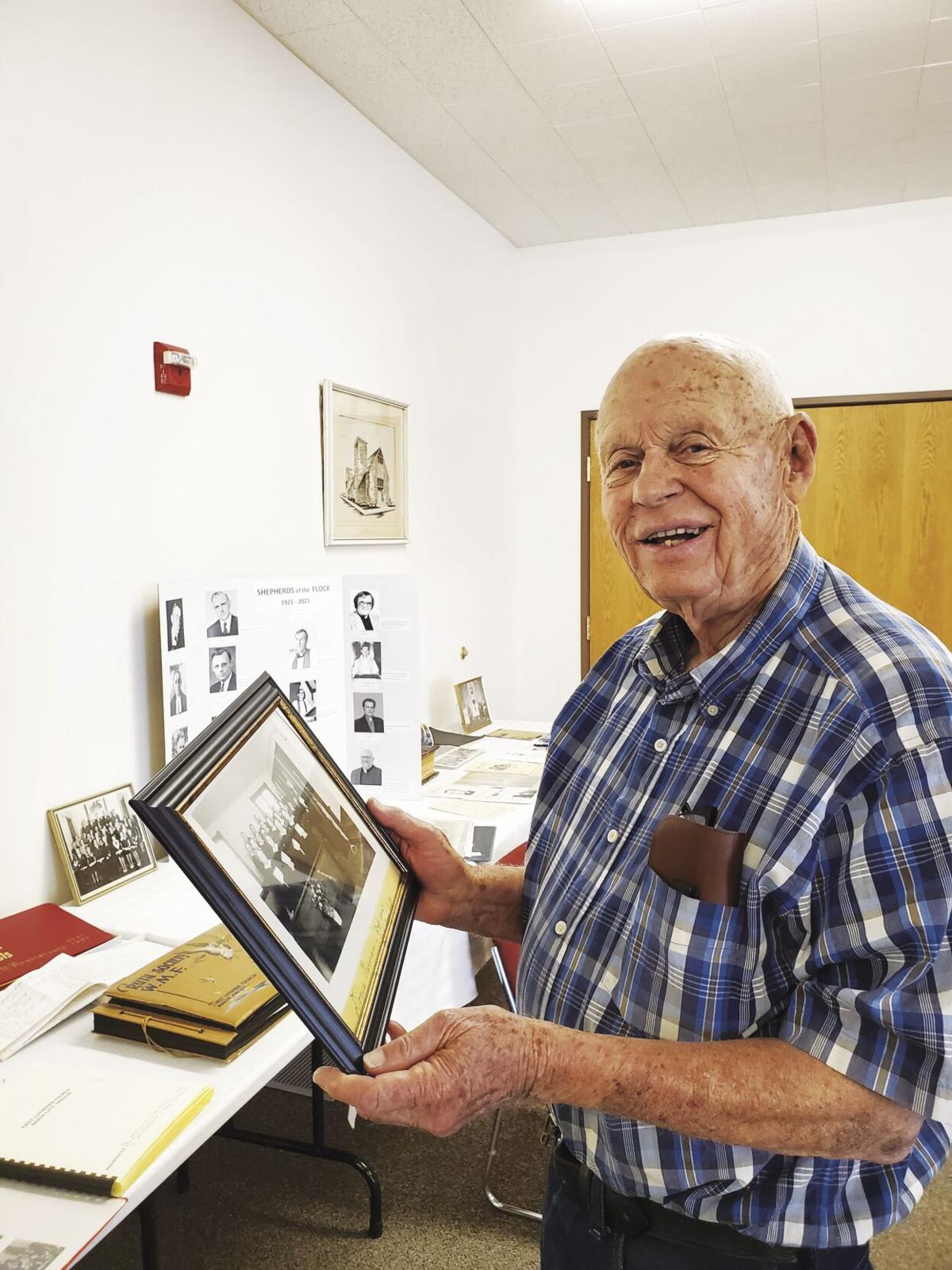 Sig Siefkes, whose father, Siegfried, served as pastor of the Baker City First Lutheran Church from 1936-43, looks at the many photos and mementoes that document the church’s 100-year history. 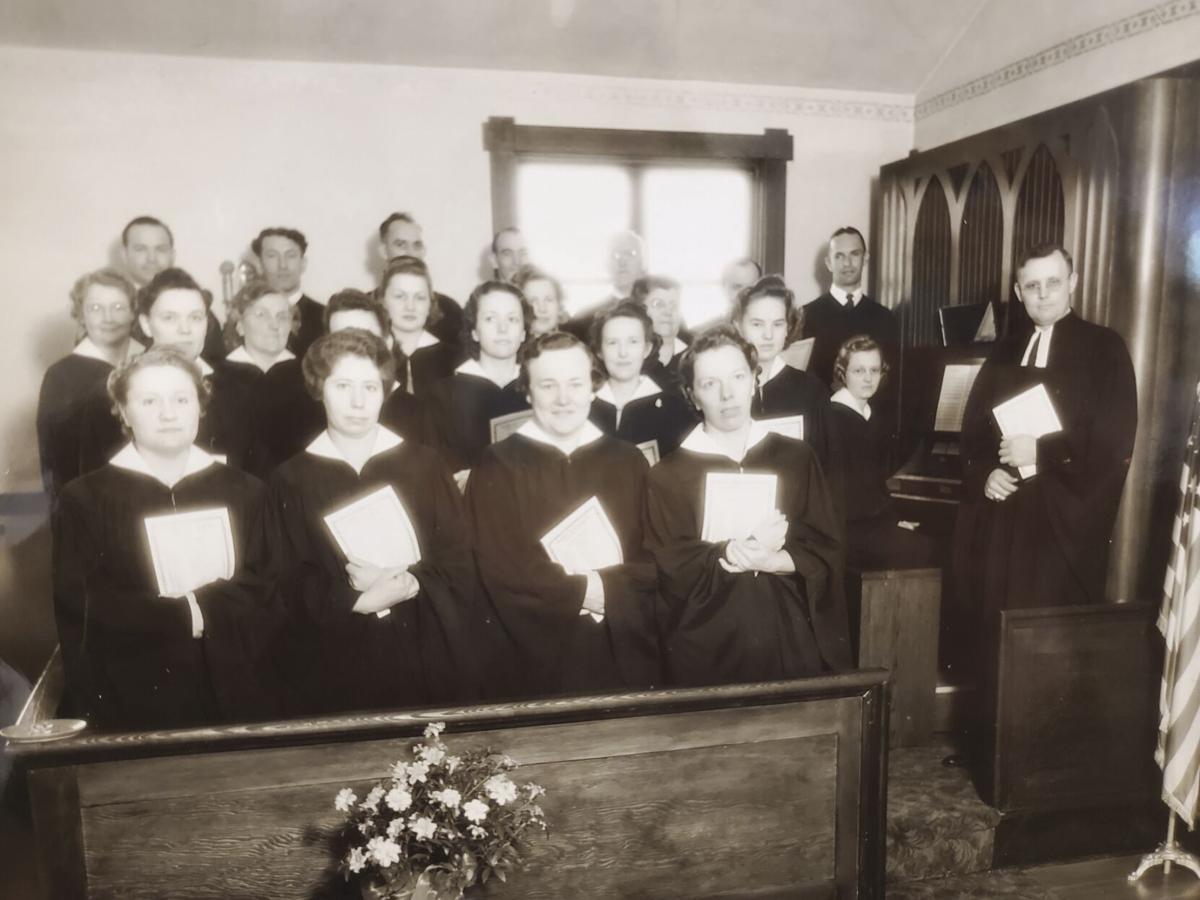 This photo shows Pastor Siegfried Siefkes, far right, and his wife Margarethe at the organ. Siefkes was pastor at First Lutheran from 1936-1943. 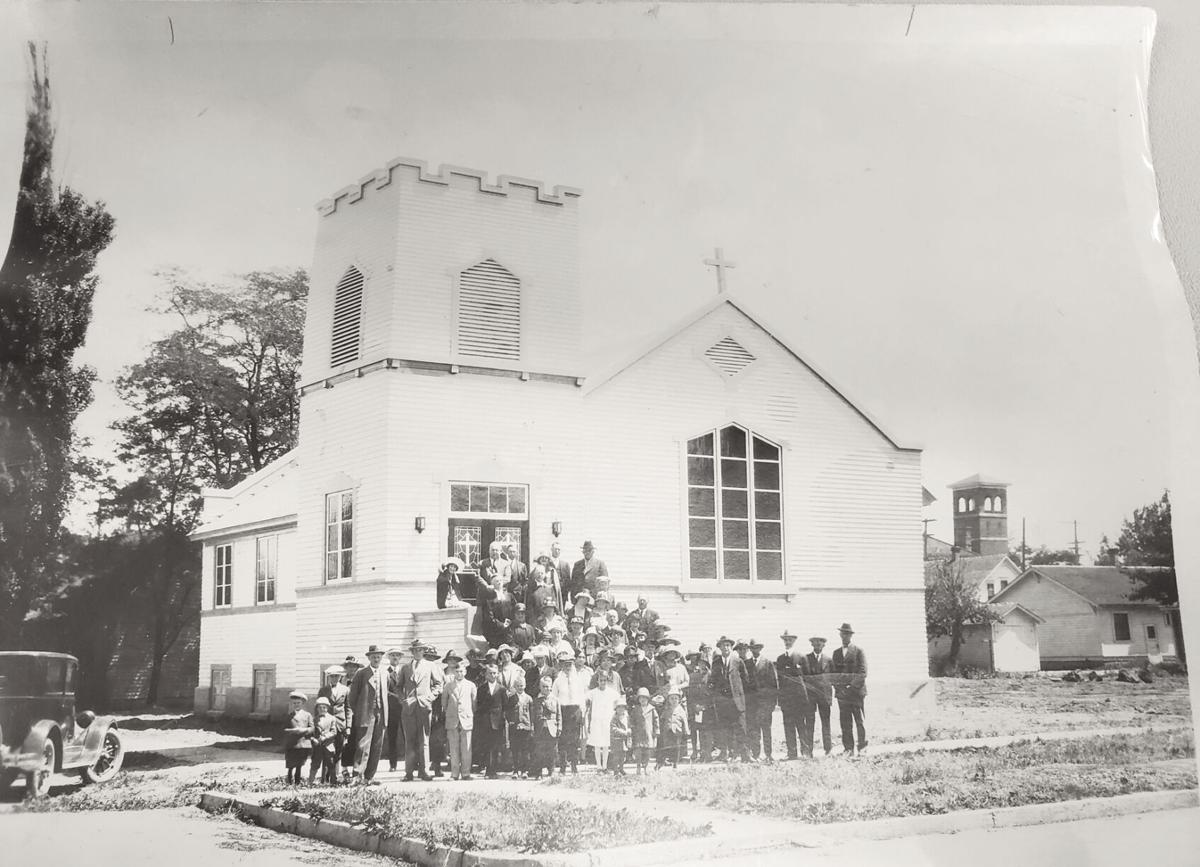 First Lutheran Church was organized and incorporated in 1921. This photo shows the original building.

The stained glass window is the only part of the original First Lutheran Church that remains. The original church, built in 1921, was remodeled about 30 years later.

A total of 1,200 white paper doves decorate the interior of First Lutheran Church in Baker City. Each dove represents a person who was baptized at the church since it opened in 1921.

This photo shows Pastor Siegfried Siefkes, far right, and his wife Margarethe at the organ. Siefkes was pastor at First Lutheran from 1936-1943.

First Lutheran Church was organized and incorporated in 1921. This photo shows the original building.

Judy Chinn smiles as she looks at the white paper doves — 1,200 in all — streaming down the walls of the sanctuary.

“I thought it was just so beautiful,” Chinn, 83, says of when she first saw the decorations in place. “Each one of these doves represents a soul.”

The doves, each labeled with a name and date, signify every person baptized at First Lutheran Church in Baker City since 1921.

The church, 1734 Third St., celebrates its 100th year with an anniversary divine liturgy on Sunday, June 13, at 10 a.m. A reception will follow in the fellowship hall, where visitors can see historical documents and photos on display.

Updates will be posted on the church’s Facebook page.

First Lutheran Church in Baker City was organized and incorporated in 1921. It was built on the corner of Third Street and Valley Avenue.

Prior to the building construction, the congregation met in the basement of the Carnegie Library.

Sig Siefkes, 92, remembers the original church. His father, Siegfried Siefkes, was pastor at First Lutheran from 1936 to 1943.

“We drove out here from Rocky Ridge, Ohio,” Sig said. “When Dad was installed, there were 19 people in the building. When he left seven years later, there were 250 people.”

“Dad had confirmation classes that were huge, and we had Sunday school classes all over the place, there were so many kids,” he said. “He had an amazing ministry here.”

Soon after arriving, Pastor Siefkes orchestrated the purchase of a Kimball pipe organ.

A shipping delay caused a bit of panic in the congregation.

“It came the Saturday before it was to be dedicated,” Sig said.

That outreach has continued, first to a television broadcast and lately to a livestream on Facebook.

Sig’s father was called to serve a church in Vanport, near Portland, in 1943.

“A large number of them were Lutherans from Minnesota, and they needed a pastor,” Sig said.

(Created between Vancouver and Portland to house shipyard workers during World War II, Vanport was destroyed by the flooding Columbia River in 1948.)

Sig moved with his family to Portland, but came back to Baker City during summers, and after high school.

“My roots went down here,” he said.

Although adult life took him to California, Sig moved back to Baker City in 1993.

During a span without a pastor — prior to Pastor Ian Wolfe’s arrival in 2016 — the congregation took turns preaching on Sundays.

“A bunch of us took turns. I ended up doing it more and more,” Sig said. “I was so nervous at first. But you can get used to anything after awhile.”

On a recent Sunday, when Pastor Wolfe was out of town, Sig again delivered the message — but this time he spoke the words of his father.

Pastor Siefkes’ handwritten sermons are currently on display for the church’s 100th celebration.

“The folks became members in ’38,” Freeman said. “There were six of us kids, and we all were baptized and confirmed in the church.”

The Freemans lived on a ranch outside town, and First Lutheran was the family gathering place.

“When we came to town, the church was where we’d always meet,” he said. “The church was the social gathering in the community.”

With a growing congregation, the church was remodeled and expanded by 1951.

Only the stained glass window remains of the original building (the window was enlarged with a border to create the current version).

The church underwent more change 50 years later with an expansion finished in 2001. The parsonage, which sat just south of the church, was moved to a different location in Baker City. A fellowship hall, with a larger kitchen and elevator, was constructed in its place.

Just like the original stained glass, other artifacts were saved such as the rose-colored glass that was made into crosses to adorn the windows.

Another staple at First Lutheran Church has been Kids Club, started by Virginia Buchfinck in 1982.

Buchfinck, who turned 101 in October 2020, moved to Baker City in 1949, and immediately joined First Lutheran.

Over her many years of involvement at the church, it is the ministry to children that stands out in her mind.

“Kids Club was always it,” she said.

A hay ride to the Freeman Ranch was a fall tradition.

“The minute they got there, they scattered,” she said with a smile.

She started Kids Club, she said, when she noticed that children from the Lutheran Church were attending youth programs at other churches in town.

“We had 20-some kids in our own church,” she said. “Then kids came from outside the church.”

Her involvement with Kids Club continued until 2016.

“I really enjoyed all the kids,” she said. “And the kids seemed to enjoy all that we did.”