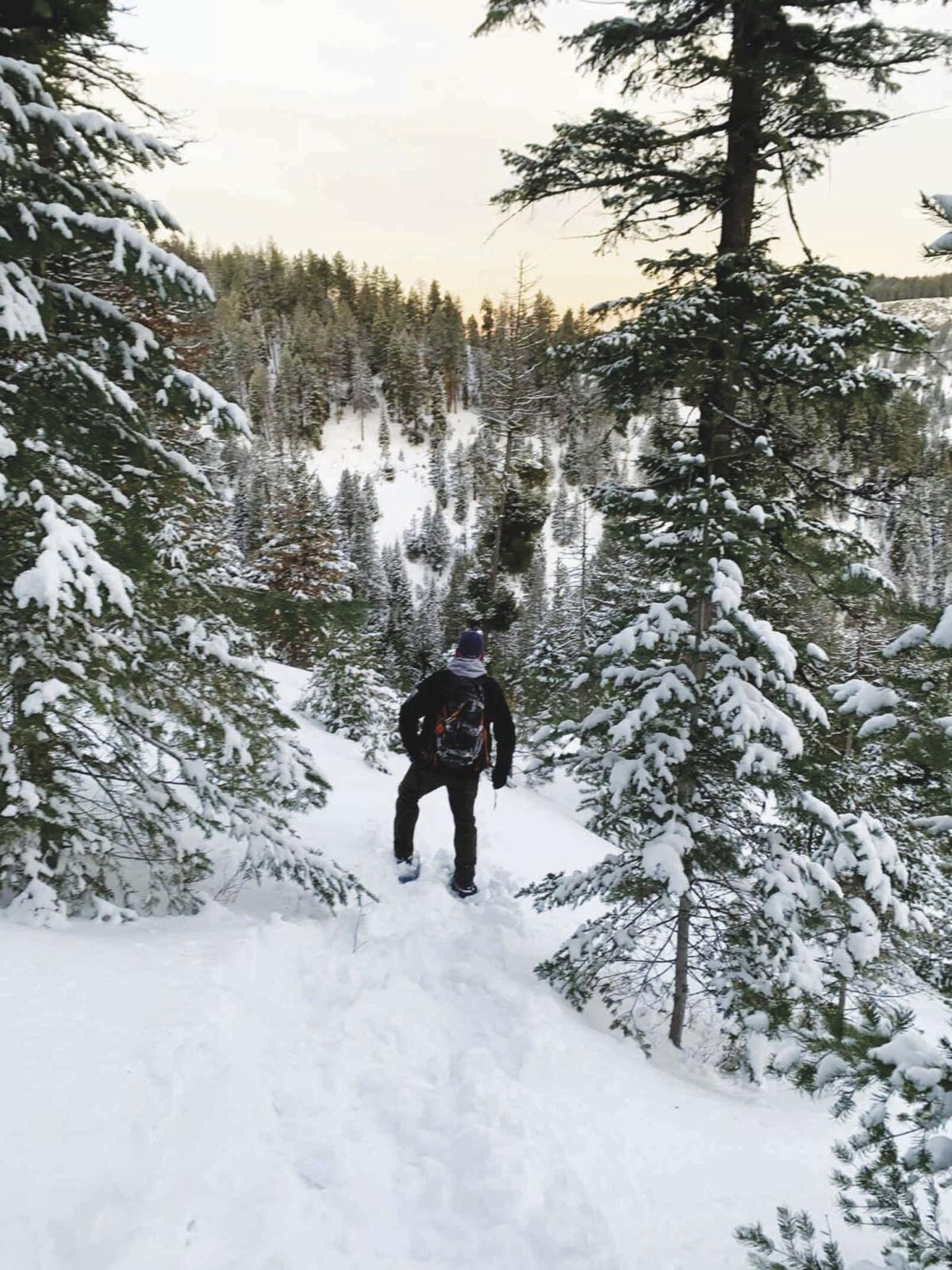 Lt. Ryan Downing of the Baker County Parole and Probation Department joined Sheriff Travis Ash in searching for, and eventually rescuing on Sunday morning, Dec. 27, two hunters who spent the previous night in the Wallowa Mountains northeast of Baker City. 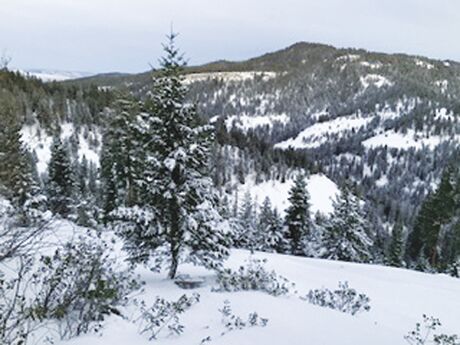 A view of the terrain where two hunters were rescued early Sunday, Dec. 27. 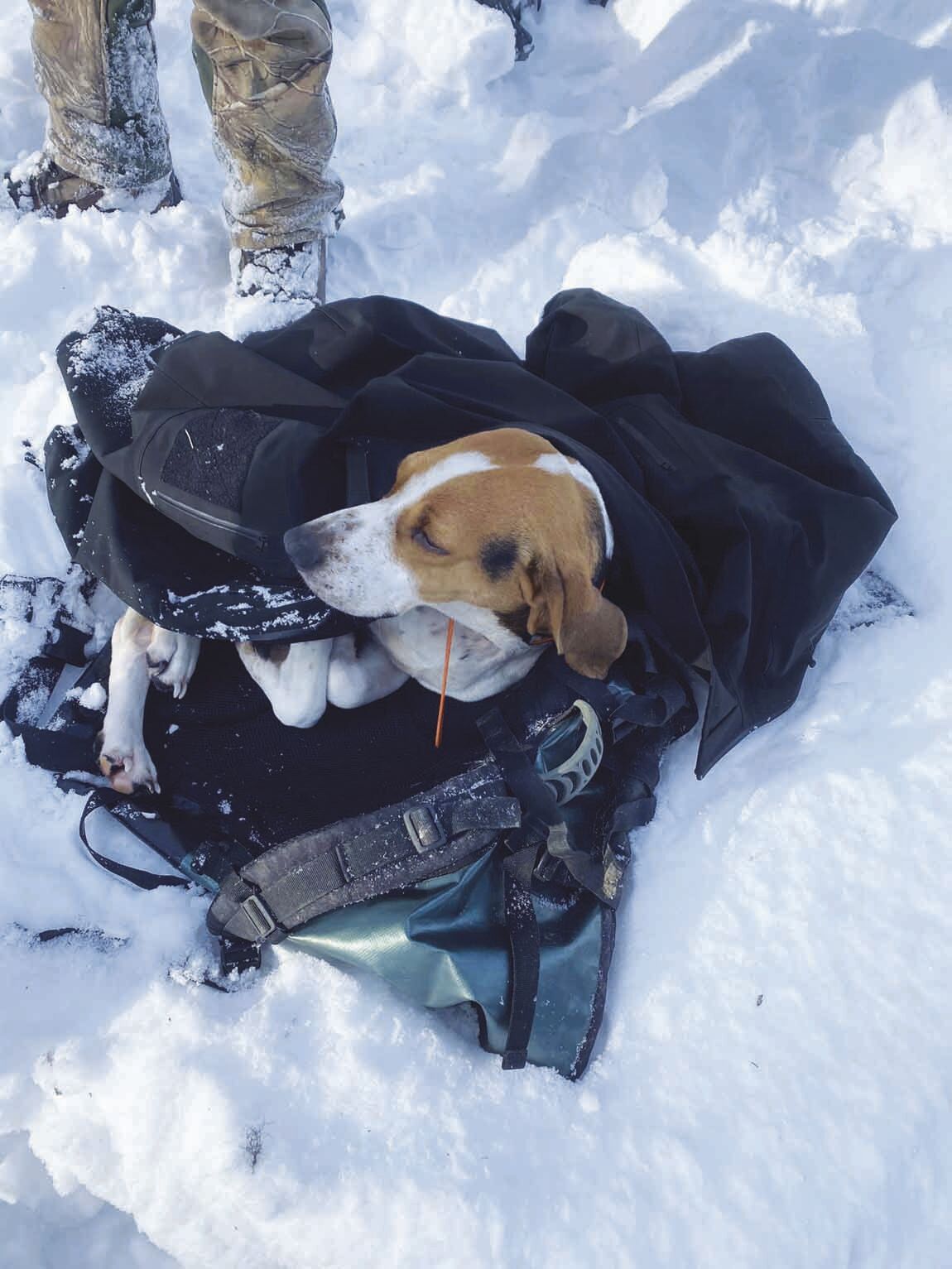 The hound dog that accompanied a pair of hunters was cold but otherwise unharmed.

The cruel cold of a winter night in the Wallowa Mountains was sapping Cody McCue’s energy, but he wasn’t leaving.

Not until the two missing hunters were found.

Baker County Sheriff Travis Ash and Lt. Ryan Downing of the county’s parole and probation department were committed to the search as well.

A rescue effort that involved that trio, along with the search and rescue teams from the sheriff’s offices in both Baker and Union counties, resulted in the rescue Sunday morning, Dec. 27, of two bobcat hunters. They were overtaken by nightfall and spent the night in a snowbound canyon with only a small fire to ward off temperatures that turned Ash’s fleece gloves into ice sculptures in just a few minutes.

Both hunters were tired, cold and hungry, but neither was hurt, Ash said on Monday morning.

Joseph Curtis, 31, and Michael A. Frazier, 16, both of Baker City, were accompanied by a hound dog. She was also uninjured, Ash said.

The incident started Saturday afternoon, Dec. 26, when McCue and James Coles of Baker City finished a day-long snowmobile ride along Forest Service Road 77. That’s a popular snowmobile route that starts at Catherine Creek Summit along Highway 203, about 14 miles southeast of Union and 25 miles northeast of Baker City. Road 77 leads east into the Wallowas toward Eagle Creek.

McCue said that when he and Coles returned to Catherine Creek Summit around 3:30 p.m., Bill Frazier, who’s Michael Frazier’s father, asked if they had seen any other snowmobilers.

McCue said Bill Frazier told him about the two hunters, who also had a snowmobile but hadn’t returned to the highway.

McCue said he told the elder Frazier that, with night falling soon, he was willing to come back if the pair failed to show up.

“I just had a gut feeling,” McCue said.

McCue learned that Frazier was acquainted with one of McCue’s friends, Mike Williams of Baker City. McCue said he told Frazier that if the hunters didn’t return, he could call Williams, who would then get in touch with McCue.

The caller was Williams.

The hunters were still missing.

McCue said he and Williams, snowmobiles in tow, headed toward the mountains and arrived back at Catherine Creek Summit around 8:30 p.m.

McCue said that although he and Coles hadn’t seen any other snowmobilers on their earlier ride, when they went more than 15 miles east to the West Eagle Meadows areas, he did recall seeing fresh snowmobile tracks.

Snow fell on Christmas night and through much of the day Saturday in the area, McCue said.

He and Williams rode east on Road 77. At 10:33 p.m. — he checked the time — McCue found the hunters’ snowmobile parked near the junction of Road 77 and a spur road, No. 860, which was blocked by a tank trap and fallen trees.

The junction is about seven miles east of Catherine Creek Summit.

McCue and Williams rode back to the highway to tell Bill Frazier what they had found, and to get to a place where they had cell service.

McCue said he initially called the Baker County Sheriff’s Office, although the snowmobile was actually just over the county line in Union County.

Woodward said the sheriff’s office activated its search and rescue team and requested help from the Baker County Sheriff’s Office.

Ash said his phone rang about 1 a.m. on Sunday. He also summoned the county’s search and rescue team.

McCue led the pair to the snowmobile.

Ash said the hunters’ boot tracks — they weren’t wearing snowshoes — were easy to follow through the snow of the otherwise untrammeled 860 road, which led north toward the South Fork of Catherine Creek.

Although he and Downing wore snowshoes, Ash said that when he stepped into the snow without the aid of the snowshoes he sank almost up to his waist.

Ash said walking the 860 Road was relatively easy as the road is mostly flat.

When he and Downing reached the end of the road near Huckleberry Spring, they saw that the hunters’ tracks continue down a steep slope to the north.

Ash said he and Downing decided to continue following the tracks rather than wait for more searchers.

Once they left the road their progress slowed, and the going was much more difficult, Ash said.

“It was so steep that anytime you went to make a turn, if you didn’t dig your (snowshoe) cleats in you went down,” he said.

Eventually he and Downing unstrapped the snowshoes because it was easier — though not easy — to wallow through the snow without them.

Ash said he and Downing reached the South Fork of Catherine Creek near its confluence with two tributaries — Corral and Prong creeks.

Ash said the creeks weren’t solidly frozen, and he and Downing broke through the ice in several places. They were wearing waterproof boots and gaiters, but Ash said he wondered whether the hunters, who also had broken through the ice, had gotten soaked.

A little before 8:30 a.m., Ash heard voices responding when he and Downing made one of their frequent calls or whistles.

They reached Curtis and Frazier at 8:34 a.m. by Ash’s watch.

They were, Ash said, “very appreciative.”

He said the pair had heard what they thought were calls a few minutes before Ash and Downing arrived.

Ash joked that that might have been him and Downing muttering, none too happily, when they broke through the creek ice.

The hunters had a Bic lighter, he said, and using paper business cards from Frazier’s wallet they kindled a small blaze to help dry their socks, which had indeed been soaked while they crossed the creek bottom. They also had a dry bag they used to collect water from the creek to slake their thirst.

“It must have been a miserable night,” Ash said.

The rescuers and the hunters hiked north along Corral Creek to the 620 spur road, where a side-by-side from the Union County Sheriff’s Office was able to reach them.

While they waited, Ash said he and Downing built a bigger fire and gave Curtis and Frazier food and water.

It’s not clear how low temperatures plummeted during the night. The nearest weather station is the Taylor Green snow-measuring site, which recorded a low of 24 degrees. But Taylor Green is on a ridge, where temperatures on still, clear winter nights usually are warmer than in creek bottoms such as where the hunters spent the night, as cold air tends to sink into low areas.

Ash said he didn’t have a thermometer. But he said it was cold enough that when he removed his gloves, which were wet from the creek crossing, they froze rapidly.

Ash said Curtis and Frazier did well to get even a meager fire going.

Without the flames, the pair would have been very vulnerable to hypothermia, a life-threatening lowering of the body’s core temperature.

“It could have been a recipe for disaster,” Ash said. “I’m glad we found them when we did.”

While Ash and Downing were trudging through the snow, McCue was still aboard his snowmobile. He spent the entire night patrolling with Williams, stopping occasionally to shout.

“It wasn’t very fun,” McCue said. “I was freezing cold. My voice was gone.”

But McCue said he was committed to the rescue.

McCue said the reaction of the hunters' families more than made up for his discomfort.

"To have been there with the family seeing the tears of joy and shedding tears with them when they got to see their loved ones coming down the hill into the parking lot safe and alive, it was truly worth every hour of no sleep, being cold, and tired," he said.