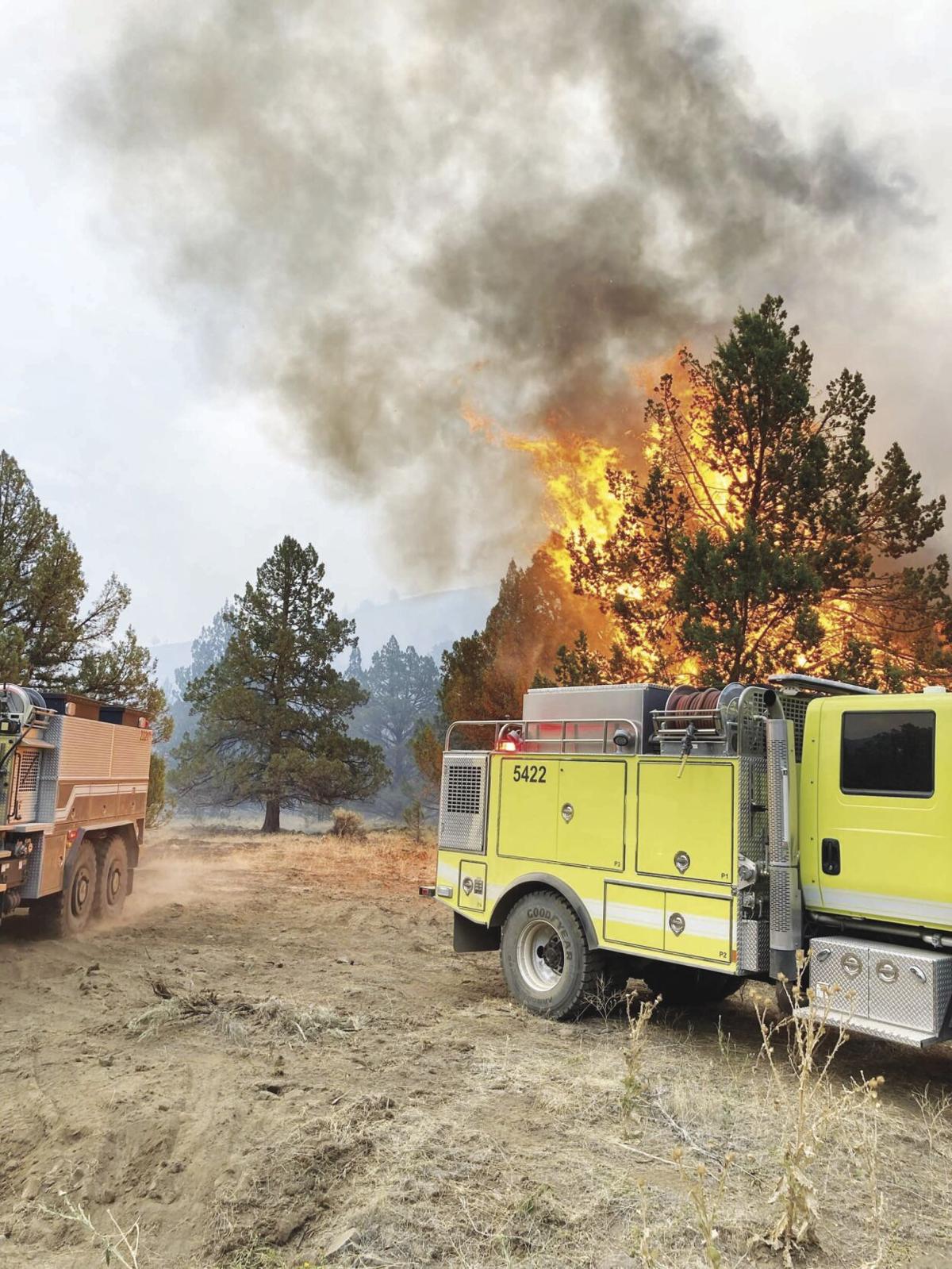 Fire crews conduct a burnout on Tuesday at the Indian Creek fire in Malheur County. Firefighters sometimes burn fuel between the main fire and control lines to reduce the risk that flames will cross the lines. 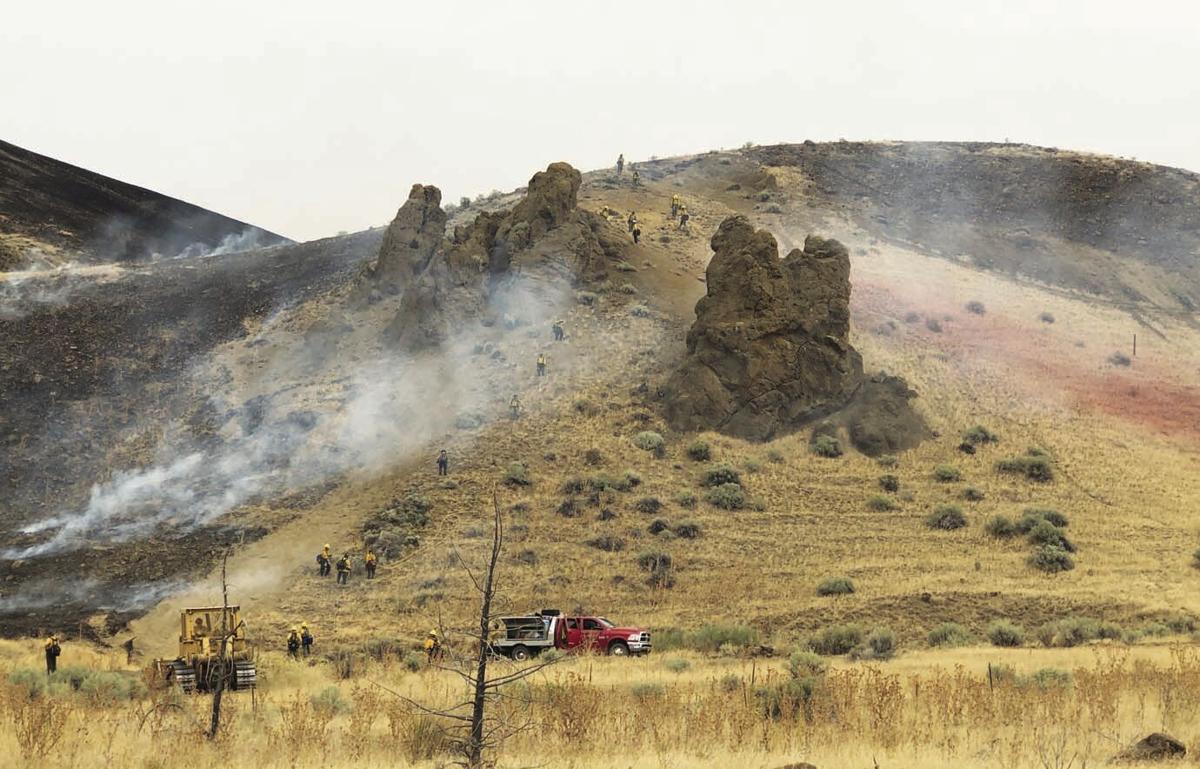 Crews conduct a burnout on Wednesday morning at the Indian Creek fire.

Fire crews conduct a burnout on Tuesday at the Indian Creek fire in Malheur County. Firefighters sometimes burn fuel between the main fire and control lines to reduce the risk that flames will cross the lines.

Crews conduct a burnout on Wednesday morning at the Indian Creek fire.

The combination of record-high temperatures and widespread lightning has elevated the wildfire risk in Northeastern Oregon this week.

But with the fire season relatively tranquil across the West, at least compared to many recent summers, fire bosses have been able to summon significant resources to douse flames from the air and the ground.

Widespread lightning that sparked more than a dozen new fires in Northeastern Oregon Tuesday, along with growing conflagrations in California, changed that situation somewhat. Fire officials are having to move those resources, rather like generals shifting battalions to deal with new threats.

The aerial armada has been especially useful in what fire managers call “initial attack” — the vital period soon after a fire is reported when rapid action by firefighters can keep a blaze relatively small.

“Quite a few of the fires, if it wasn’t for the aircraft they would have been bigger than they turned out to be,” said Steve Meyer, fire protection manager at the Oregon Department of Forestry’s Baker City office.

Conditions had already begun to change by Tuesday, when the Baldy fire 20 miles south of Baker City spread rapidly, followed by thunderstorms that delivered copious lightning but only scattered rain (see related story above on this page).

“Regionally, we haven’t had many incidents, but things are heating up and there’s more competition for resources,” said Al Crouch, fire mitigation/education specialist for the Bureau of Land Management’s Vale District.

“If there are not very many ongoing fires, the chances of getting the resources you request are higher than if everyone is busy at the same time,” Crouch said.

Other factors also affect how many aircraft, if any, are available for a particular fire.

For instance, fires that threaten people and property always have the highest priority, Crouch said.

A recent example is the fire near Mosier, in the Columbia River Gorge, that destroyed 36 structures and threatened about 660 others.

On Sunday, nine aircraft, including six single-engine tankers and three multi-engine tankers, dropped retardant to try to stem the spread of the flames.

Aircraft have been dispatched from Ontario, Burns, John Day, La Grande and Redmond in Oregon, as well as from Boise, Idaho, and Moses Lake in Eastern Washington, Bogardus said.

Having those aircraft available to work on the Indian Creek fire, which has burned about 14,000 acres of grass and sagebrush, also ended up augmenting the initial attack capability on a new fire sparked by lightning Monday evening.

Several airplanes dumped retardant ahead of the Baldy fire north of Ironside, near the border between Baker and Malheur counties, Bogardus said.

“The ability to get aircraft support to the incident as quickly as possible is incredibly important in slowing the spread of the fire,” Crouch said.

Despite the aerial assault, the Baldy fire, aided by gusty winds, hot temperatures and low humidities, grew to an estimated 5,000 acres on Tuesday.

Crouch said the increasing competition for firefighting resources resulting from the rash of new blazes affected efforts to slow the Baldy fire on Tuesday.

Although single-engine air tankers were available, larger tankers, which can drop considerably more retardant, were working on other fires Tuesday afternoon and evening.

Ultimately it’s ground-based firefighters who extinguish blazes, Crouch said, but aircraft, which travel considerably more rapidly than a pickup truck or a fire crew that has to hike to the scene due to terrain or a lack of roads, can make the ground crews’ task much easier.

“It’s a great tool in our toolbox,” he said, meaning both airplanes that drop retardant to stem the forward movement of fires, as well as helicopters, which can dump water directly on flames.

Meyer said the ability to summon aircraft has been especially important this week, with lightning likely to spark new fires in grass and sagebrush dried by the past several weeks of mainly dry weather.

“This is kind of the worst that we’ve seen so far this summer,” Meyer said.

Fire managers closely watch the computer model that estimates how much heat a fire would release — known as the “energy release component.”

This index, rendered as a number, fluctuates based on the amount of moisture in various types of fuels, ranging from grass, which burns readily but quickly, to mature timber, which isn’t as easily ignited but can burn for a long time.

There are separate numbers for each of six regions in the Blue Mountains, a system that reflects the considerable differences in terrain and fuel types.

The energy release component tends to be higher, for example, in the “juniper-sagebrush” region, which includes some of the lower, hotter and drier parts of the Blues.

On Tuesday the number for the juniper-sagebrush area was 76 — higher than for any of the five other regions.

The average for mid-August is about 69.

The energy release component numbers for the other regions ranged between 70 and 75. Those are slightly above average for four of the five regions, the exception being the canyon grasslands area — mainly in Hells Canyon — where the number is just about average.

Meyer said the fire season has been about average so far.

The Blue Mountain Interagency Dispatch Center in La Grande catalogs fires on the Wallowa-Whitman National Forest and parts of the Umatilla National Forest, parts of the BLM’s Vale District, private and state lands on which the Oregon Department of Forestry is the lead firefighting agency, and the Confederated Tribes of the Umatilla Indian Reservation.

Through Tuesday the Dispatch Center reported 125 fires for the year — 79 sparked by lightning and 46 human-caused.

The total acreage burned was 580.8 — 433.9 acres burned in human-caused fires, and 146.9 acres burned by lighting-sparked blazes. Those numbers are well below average.