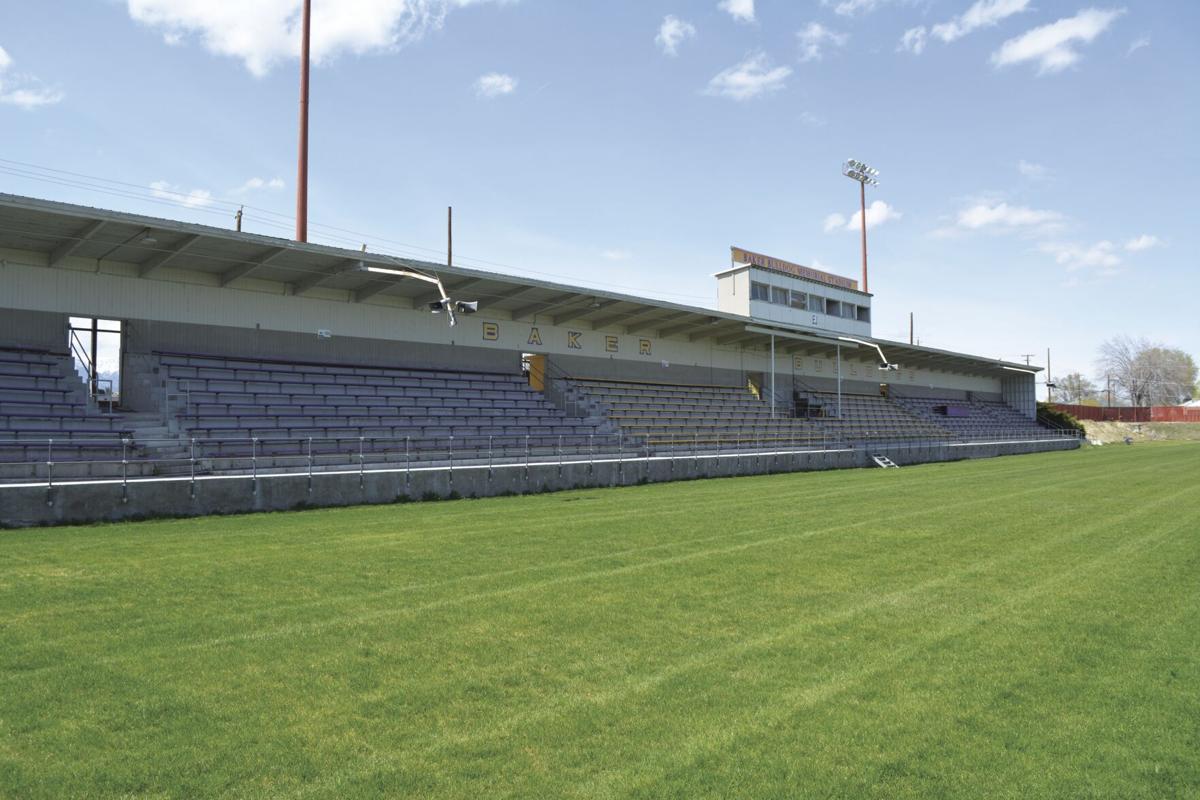 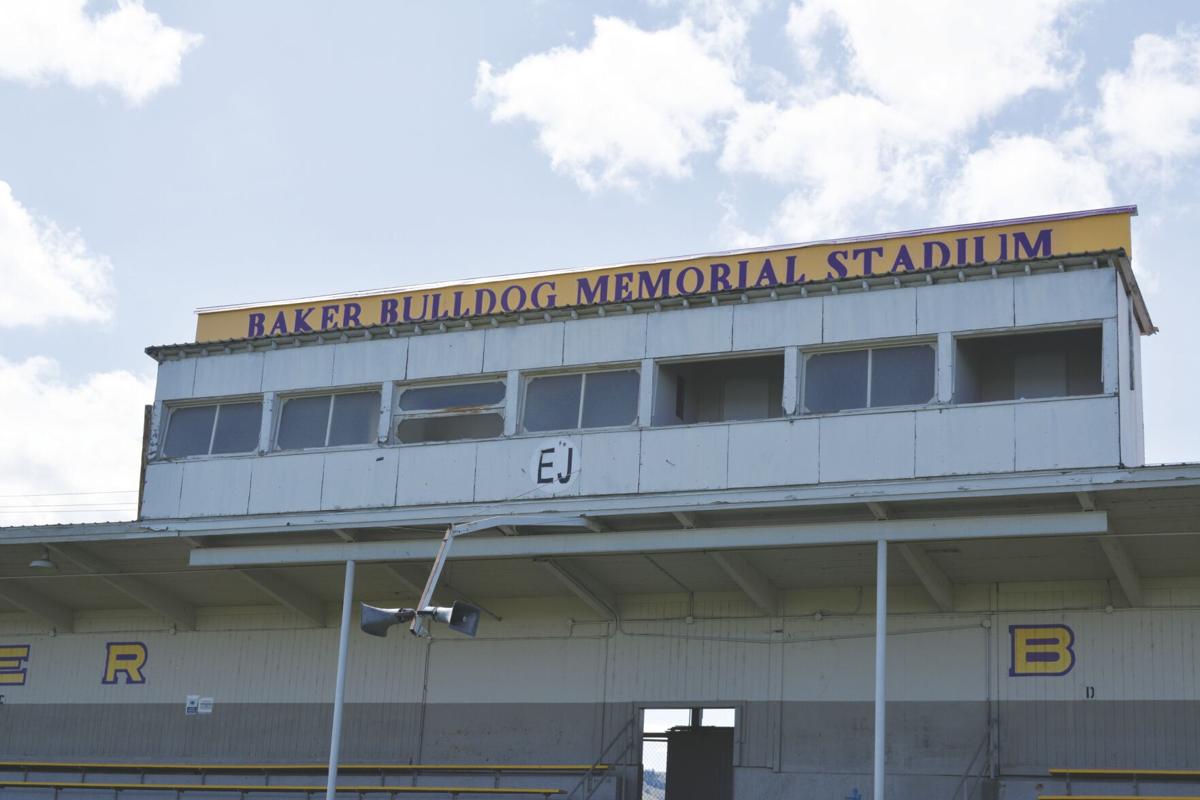 Replacing the press box is one of the projects included in a proposed three-year renovation at Baker Bulldog Memorial Stadium. 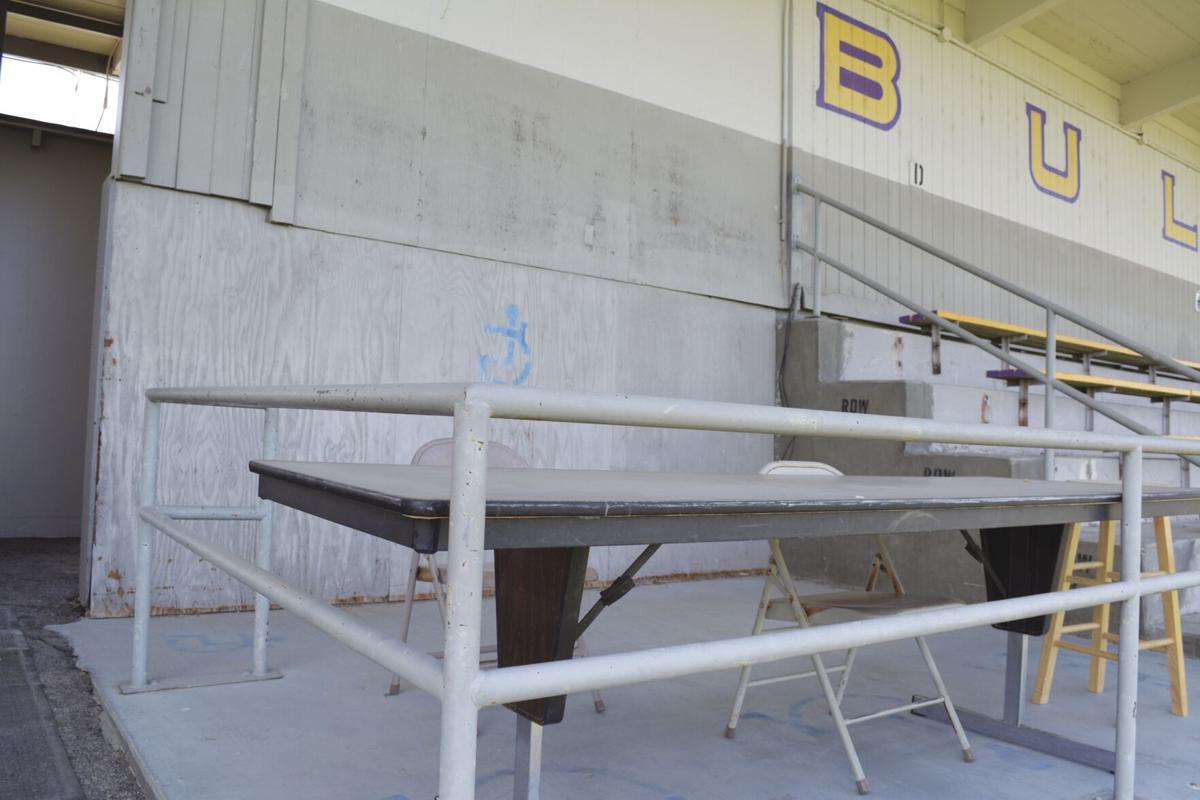 Improving access for people with disabilities is one of the major parts of a proposed three-year renovation of Baker Bulldog Memorial Stadium. 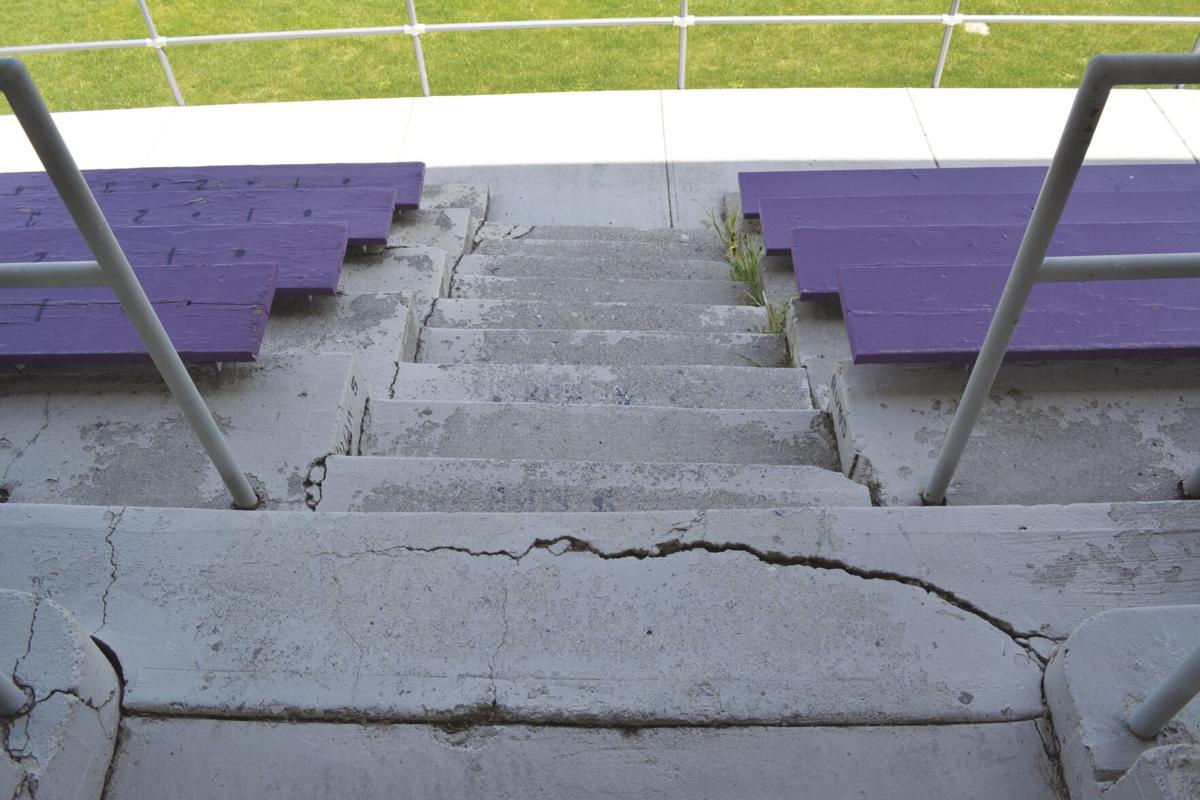 Cracks have formed over the decades in the concrete stairs and in the grandstand at Baker Bulldog Memorial Stadium. The concrete would be replaced as a part of a proposed three-year renovation project.

Cracks have formed over the decades in the concrete stairs and in the grandstand at Baker Bulldog Memorial Stadium. The concrete would be replaced as a part of a proposed three-year renovation project.

For the first time since it opened back in 1950, the Baker Bulldog Memorial Stadium could be in line for a major renovation project.

But the Baker School District athletic department likely will need to raise more than $4 million through grants and private donations to bring the plan to fruition at the football stadium at Ninth and E streets just west of Baker High School.

“Obviously we are in the very, very early stages,” said Buell Gonzales Jr., the school district’s athletic director.The three-year project, which includes rebuilding and replanting the grass field, replacing the roof on the grandstand, installing a new press box and rebuilding the concrete walkways, stairs and ramps, would cost an estimated $4.3 million.

Gonzales, who made a presentation to the school board about the proposal on April 15, acknowledged the financial challenges.

“The District obviously doesn’t have that kind of money sitting around, so that would be something that the athletic department and the district would fundraise for,” Gonzales said. “The money is going to be the hardest piece to bring to fruition, so we are just going to have to do a lot of work to get that in place.”

“We want to be a partner — that’s why we did the study,” Witty said. We recognize there’s a responsibility to upgrade that stadium. But as far as funding we’re going to need some serious help.”

Witty said the district’s top priority within its budget is, and will remain, improving its schools. That’s the reason the district is asking voters in the May 18 election to approve a $4 million property tax bond measure that would be added to a $4 million state grant, and $4 million in district capital project dollars, to replace heating, cooling and ventilation systems at all schools, replace the roof at South Baker Intermediate, build a cafeteria/kitchen at Baker Middle School and improve the security at all schools.

The stadium renovations, by contrast, will depend on fundraising, not on district dollars, Witty said.

The project started about three years ago when a group of district officials and others assessed the stadium and came up with a list of suggested improvements.

Then, a year ago, Gonzales joined that group, which reviewed the list of renovations and came up with a formal proposal.

“They looked at the facilities, studied the plans and they came with their recommendations after they did it in their assessment piece,” Gonzales said.

A major need in the 71-year-old stadium is improving access for people with disabilities.

“That’s probably one of the high priorities, the ADA accessibility,” Gonzales said.

After seven decades of wear and tear from weather, the stadium also has cracks in its concrete, and wood siding needs to be replaced.

“The actual physical condition of the facility itself needs to be addressed,” Gonzales said.

Due to the extent of the work, the architects divided the project into three phases over three years, potentially starting in the summer of 2022 if money is available.

“They gave a timeframe, phase one, two and three that would meet those upgrades,” Gonzales said.

• New restrooms, concessions with all new equipment and fixtures.

• Replace roof on west side.

• Replace bleachers on the west side.

Although he concedes the fundraising challenge the project entails, Gonzales is confident he can show potential donors why the upgrades are needed.

“You have this gushing wound, you just don’t want to keep putting a Band-aid over it, at some point you are going to have that’s a long-term fix,” Gonzales said.

In 2019 the school district replaced the railing at the bottom of the westside grandstand and removed the grassy embankment behind the home team bench area.

He also emphasizes that the renovations will not alter the stadium’s unique character and appeal, with the field in a bowl that sits below the street level.

“It still maintains its iconic bowl-shaped feature, a gorgeous grass field, a little bit wider, safer for our student-athletes, multi-purpose so it will get used more often,” Gonzales said. “The look of it will have a new appeal to it, new bleachers, new paint, the bathrooms will be upgraded, wider entrances, better signage, it will give that facility a much needed face lift but it will still be Baker Bulldog Memorial Stadium.”

Gonzales is ready for the long road ahead to see these plans come to fruition.

Jayson Jacoby of the Baker City Herald contributed to this story.