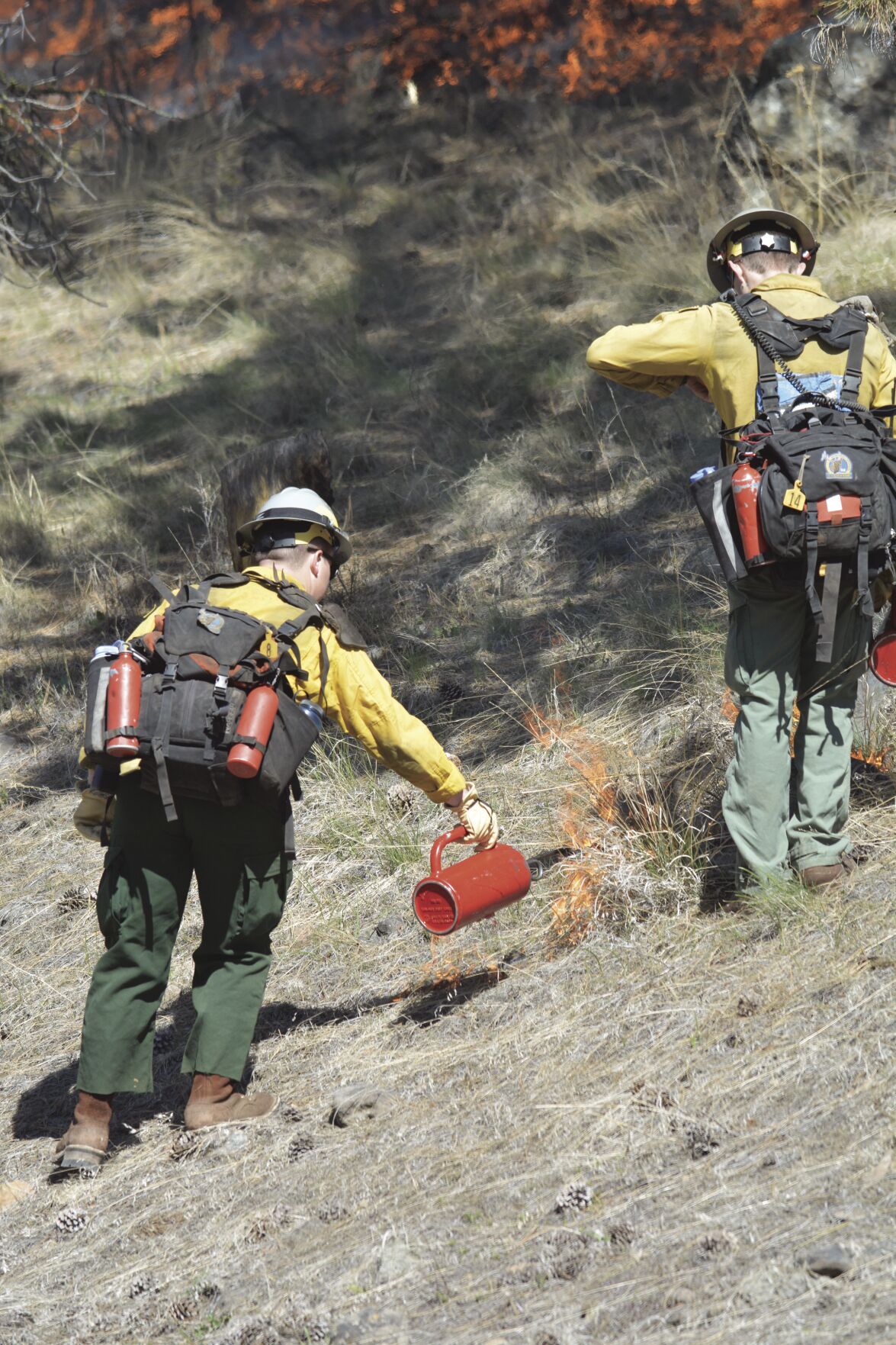 Members of the La Grande Hot Shots firefighting crew use drip torches to ignite dry grass on Thursday, April 15 north of Phillips Reservoir. The torches are filled with a mixture of diesel and gasoline. 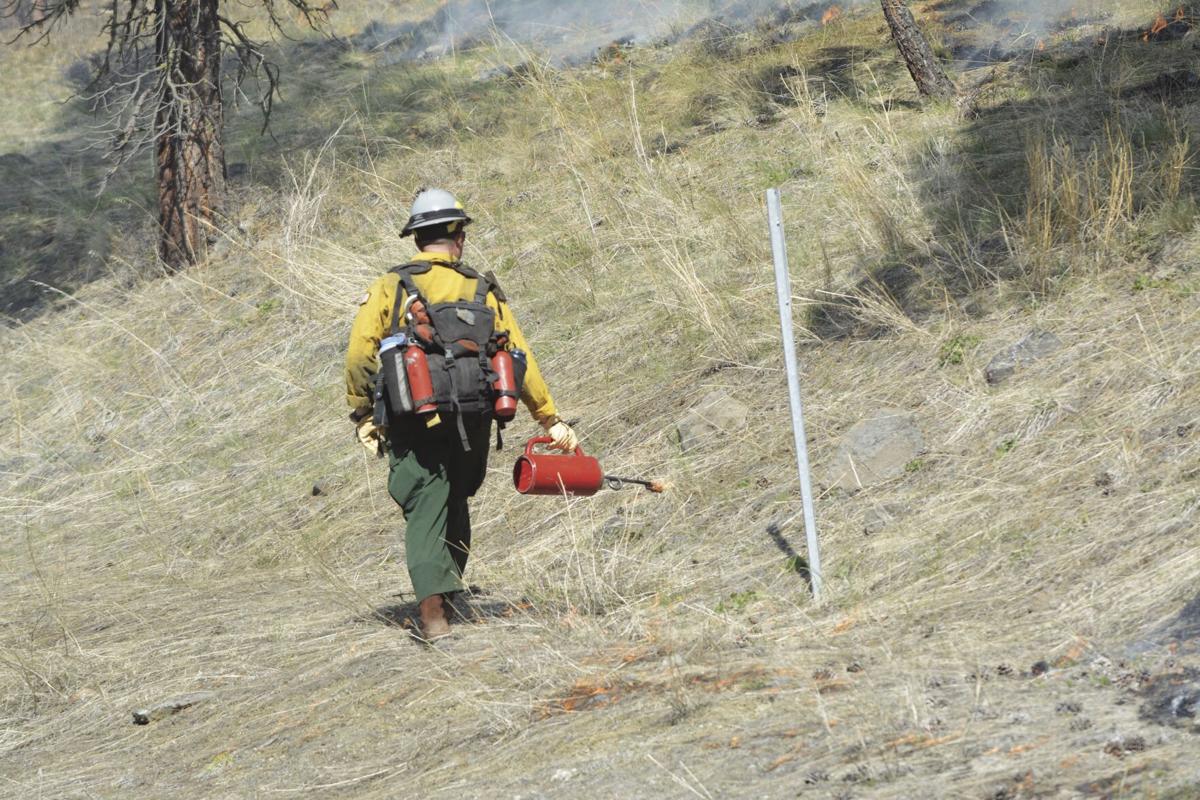 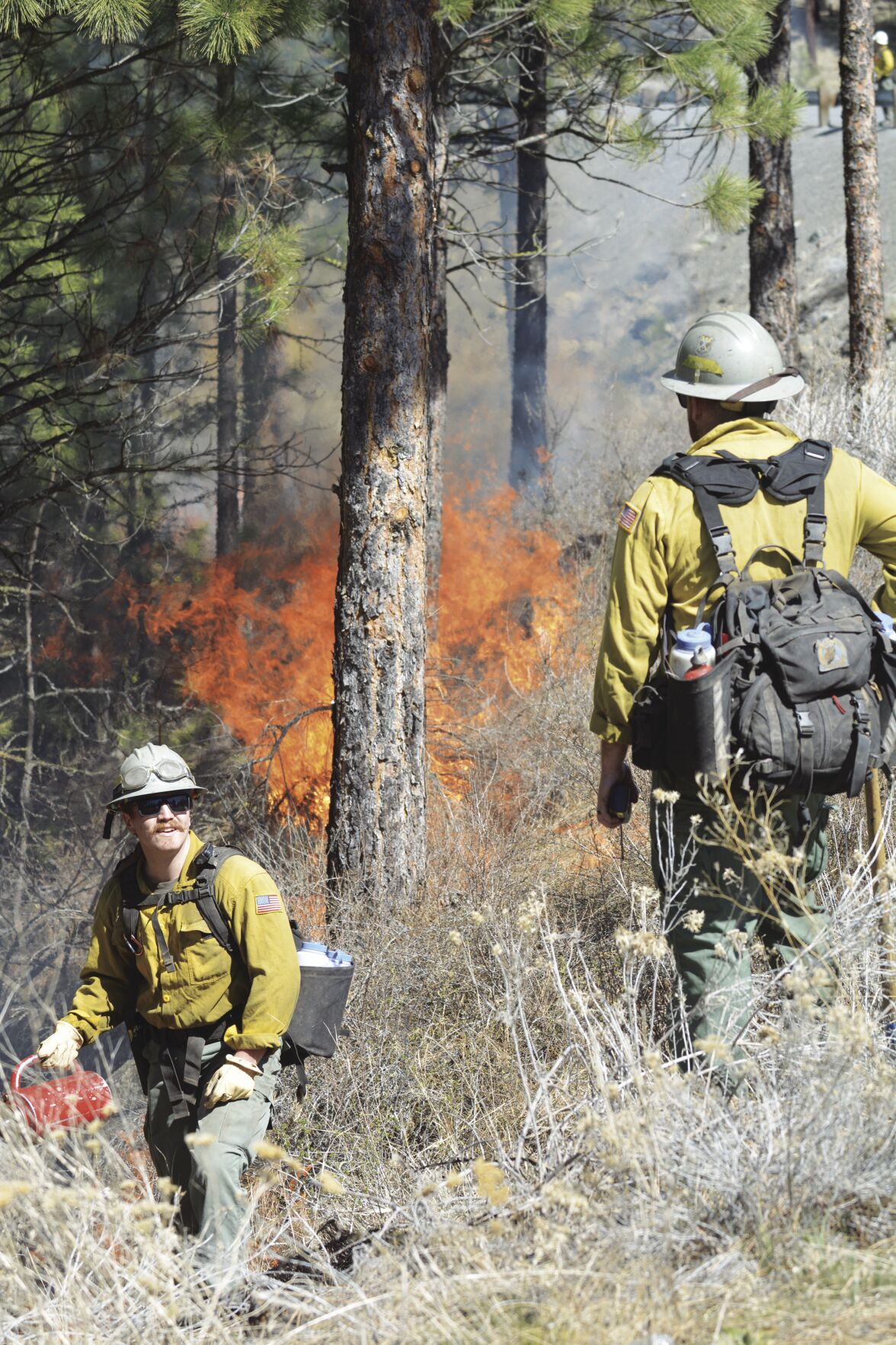 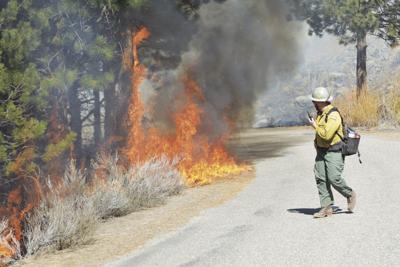 They wind their way between the pines like wraiths, dripping dollops of fire with each stride.

Smoke, and the blurring effect of rising waves of heat, combine to obscure the figures.

But their bright yellow shirts, made of fire-resistant cloth, are visible as they bob along, rather like nightflies flitting among the ponderosas and the sage and the occasional clump of bitterbrush.

The firefighters are here on the north side of Phillips Reservoir on the blue-sky morning of Thursday, April 15 with multiple goals to accomplish with their flaming torches and their flat-bladed tools designed to scrape away the forest duff to mineral soil.

One reason they’re here, while a few scraps of snow still shelter in the north-facing gullies, is to reduce the chances that they’ll have to come back on a scorching day in July or August.

A day when the flames can’t be wielded like a tool, when they won’t be an ally.

A day when every ember is a dangerous enemy.

Experts in the nuances of the forest, and its relationship with flames, call it a prescribed fire.

It is an apt term.

The second-growth ponderosa forests that grow between the reservoir and Highway 7, from Mason Dam west up the Sumpter Valley aren’t sick.

The fire that’s prescribed in this case serves more as a tonic, a supplement of sorts to keep the forest healthy.

Trevor Lewis eschews the cliché of fighting fire with fire, but he concedes that’s a significant part of the purpose of Thursday’s fire, which covered about 535 acres.

Lewis, an assistant fire management officer for the Burnt-Powder Fire Zone on the Wallowa-Whitman National Forest who served as fire boss for Thursday’s operation, said the flames will remove accumulations of dry, dead grass and the layers of desiccated pine needles that could fuel a summer wildfire.

He also hopes the fire will kill the seedling pines that have sprouted between the mature trees. Those fledgling pines can serve as “ladder fuels,” Lewis said — in effect, a combustible ladder that flames can climb from the ground to reach the trunks, and potentially even the crowns, of the tallest ponderosas.

“We want to get rid of the majority of those young saplings,” Lewis said Thursday morning as groups of firefighters dispersed from the road leading to the boat ramp near Mason Dam.

A total of 61 people worked on the prescribed fire Thursday, some using drip torches to ignite grass, while others patrolled to make sure the flames stayed within the designated areas.

Lewis said a prescribed fire, in addition to killing saplings, can also creep up the trunks of mature ponderosas, pruning some of the lower limbs and, as he puts it, “raising the ladder” of the fuels.

Forest officials fear crown fires not only because those blazes can spread rapidly, but because they can also kill a mature tree.

Thursday’s prescribed fire, by contrast, mainly stayed on or close to the ground.

A prescribed fire in October 2007 that included some of the same ground burned Thursday left many ponderosas with that rusty-red appearance. Some people who drove past the trees on Highway 7 complained to the Wallowa-Whitman, wondering why the agency tasked with protecting trees would have purposely killed them with fire.

But almost all of those trees survived, Hawkins said — the needle damage was superficial, not fatal.

Thursday’s fire was something of a milestone, said Kendall Cikanek, ranger for the Whitman District, which includes the Phillips Reservoir area.

“It’s exciting to get back to spring burning,” Cikanek said.

Spring typically brings the ideal conditions for prescribed burning — fuels aren’t so dry that a fire is likely to burn out of control, but not so damp that flames won’t move.

But in 2020, with the pandemic just beginning and rampant uncertainty, the Wallowa-Whitman canceled its spring prescribed burning schedule.

“That was a risk we didn’t want to take,” Cikanek said.

In addition to questions about the likelihood of spreading the virus among fire crews, Cikanek said forest officials wanted to avoid creating smoke, which could exacerbate health problems for people afflicted with the respiratory illness.

Conditions on Thursday were close to ideal, he said.

With steady winds blowing from the northeast and north, smoke was generally pushed away from Baker Valley, although smoke settled into the Sumpter Valley on Thursday night and Friday morning.

Before the Forest Service started fighting fires a little more than a century ago, fires, mainly low-intensity ground blazes, swept through the pine forests in this part of Sumpter Valley on average every seven to 15 years, Hawkins said.

These estimates are based on studies of fire scars on old-growth ponderosas in similar areas.

Prescribed fires are designed to mimic those historical blazes, which were ignited either by lightning or by Native Americans.

Thursday’s fire was the third prescribed blaze the Wallowa-Whitman has lit in the past 40 or so years in the strip between the reservoir and Highway 7, Hawkins said.

He described the fire as a “maintenance burn,” one intended to reduce the accumulation of fuel on the ground.

Hawkins said the flames will have other benefits, including spurring the growth of grasses and shrubs, including bitterbrush, that are important forage for deer and other wildlife.

The area around Phillips Reservoir is an important part of the forest, he said, being a popular spot for hiking and mountain biking.

He said the prescribed fire burned through parts of the campground, reducing the fuel loads in that highly-used area (the campground isn’t yet open for the season).

Crews burned more acres near the west end of the reservoir on Friday, April 16, Cikanek said.

Workers will patrol the area through the weekend, he said.