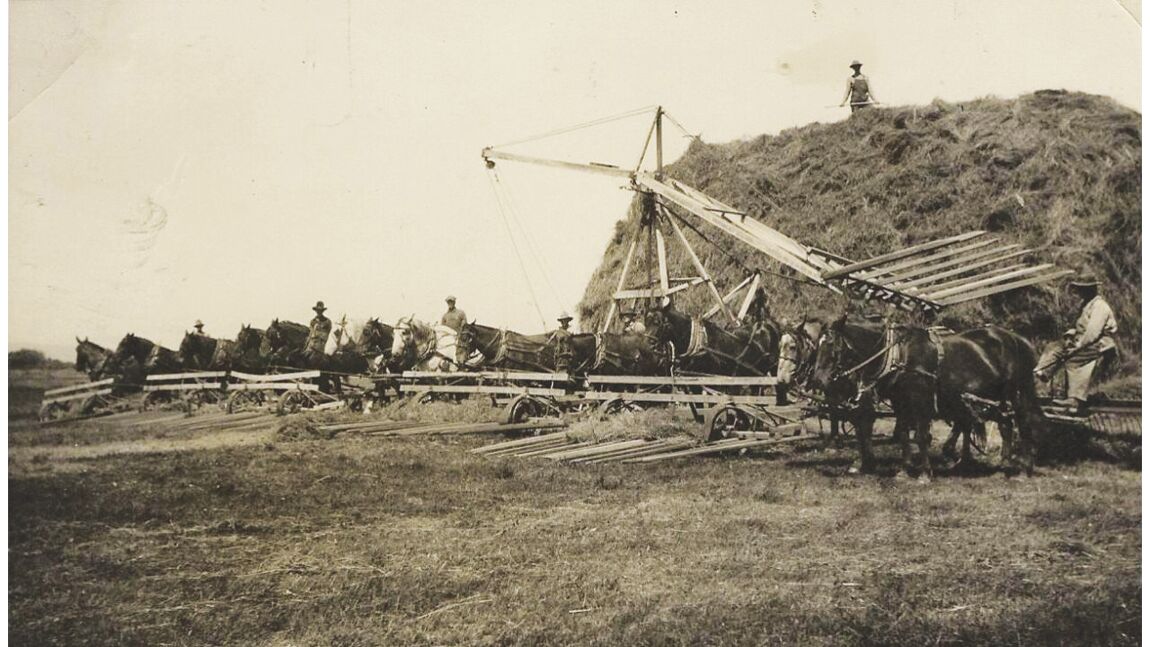 Harvesting hay on Ward Ranches in Baker Valley around 1930. 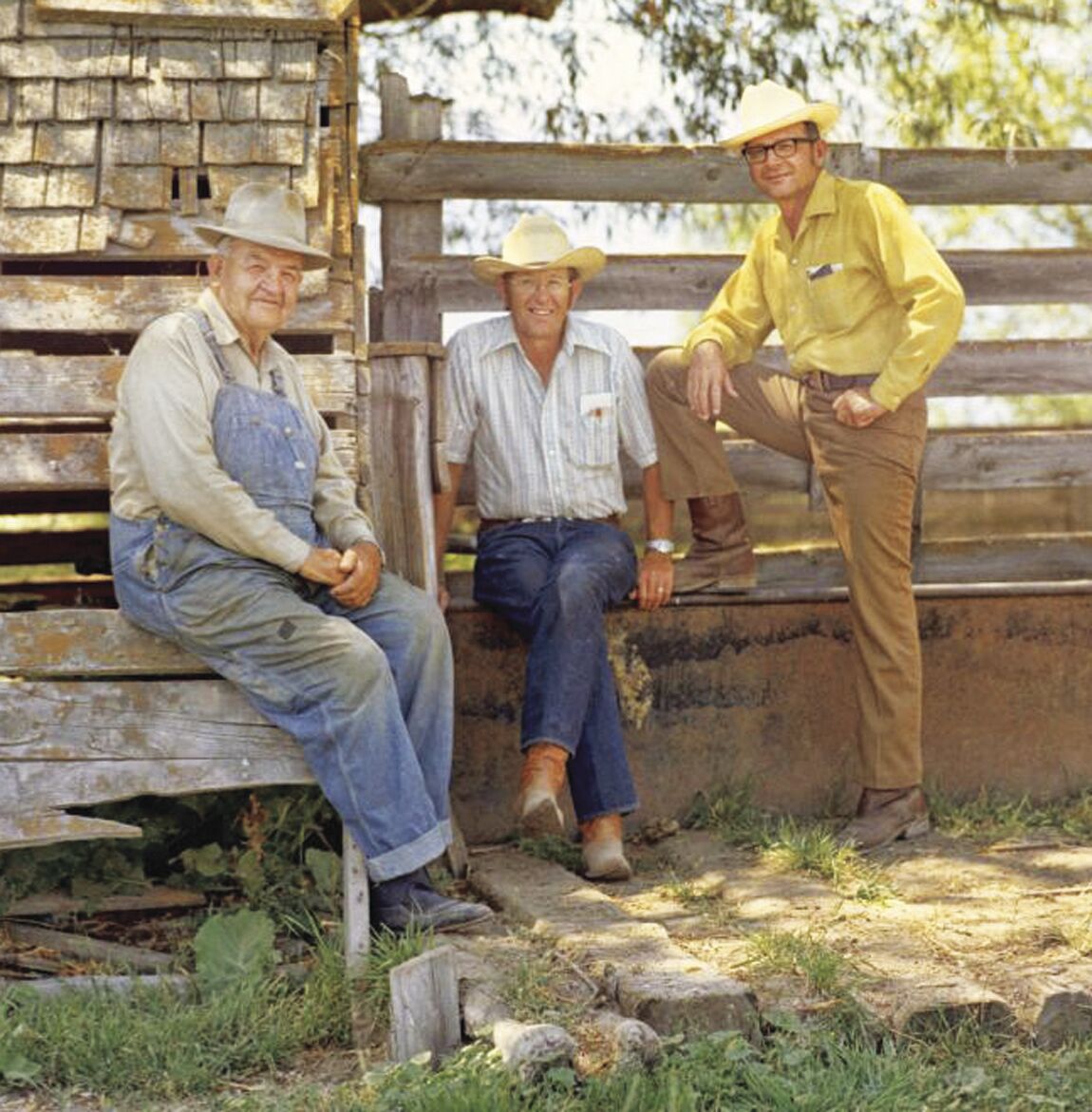 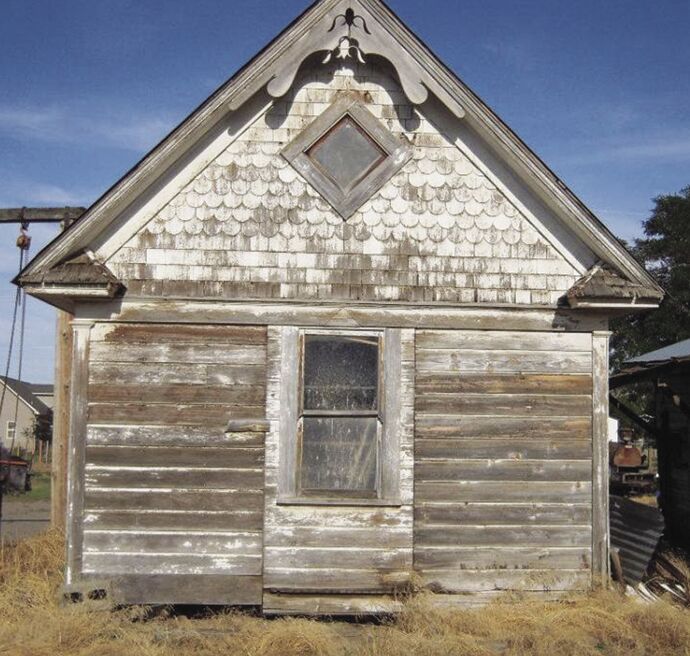 The former creamery on the Wards’ property, now used as an oil storage shed, has Victorian decorative features unusual in utilitarian farm buildings. 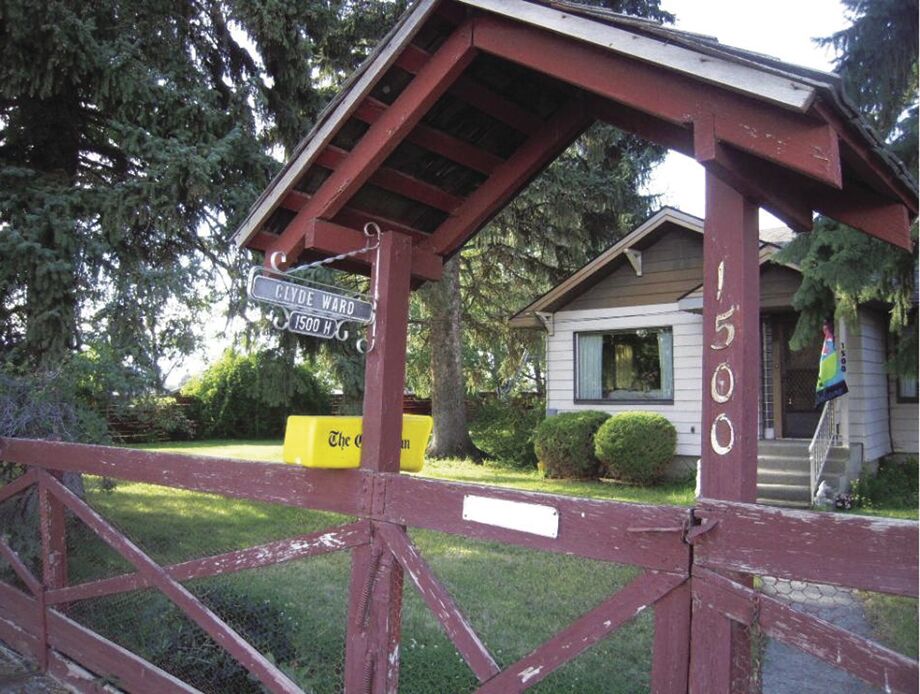 The house that Clyde Ward built in 1927 on the north side of H Street in Baker City has a clipped gable roof line. The four spruce trees planted in 1934 in the front yard today tower over the property. 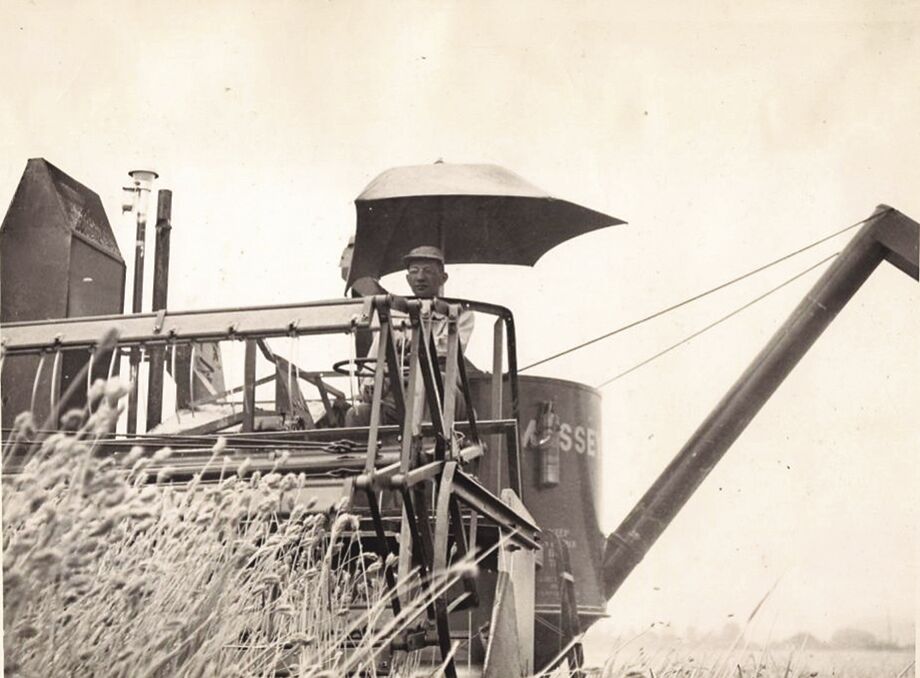 Ralph Ward during the harvest around 1950. 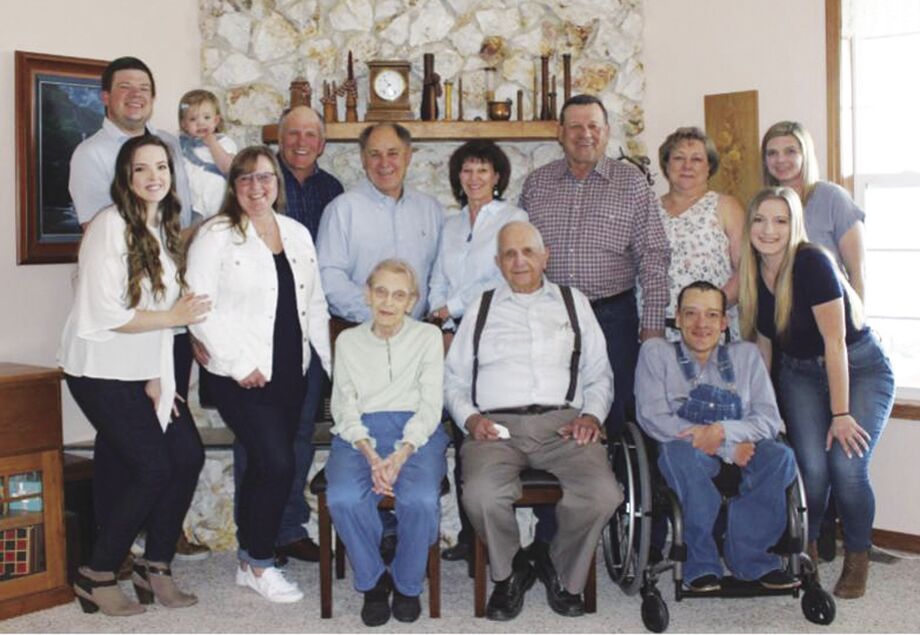 Harvesting hay on Ward Ranches in Baker Valley around 1930.

The former creamery on the Wards’ property, now used as an oil storage shed, has Victorian decorative features unusual in utilitarian farm buildings.

The house that Clyde Ward built in 1927 on the north side of H Street in Baker City has a clipped gable roof line. The four spruce trees planted in 1934 in the front yard today tower over the property.

It all started with a modest crop of potatoes, and now, 105 years later, the Ward family’s fields in Baker Valley continue to yield their yearly bounty of spuds.

But this year the Ward Ranches’ harvest will include something new.

Something not so tasty as a french fry, to be sure, but valuable in its own way.

The business, still operated by two grandchildren of its founder, Clyde Ward, has been honored as an Oregon Century Farm.

The Oregon Century Farm and Ranch program, which started in 1958 on the state’s centennial, is run by the Oregon Agricultural Education Foundation. The program recognizes families that have worked the same land for at least 100 years.

Ward Ranches is Baker County’s lone entry in the 2020 class.

It joins 28 other farms and ranches in the county to receive the Century designation.

“We are blessed and thankful by this heritage and lifestyle that makes us who we are today,” Clyde’s granddaughter, Kathy Ward, wrote in the biography she compiled as part of the family’s application. “Ward Ranches is the result of generations of family working together to make their farm’s legacy live on and thrive.”

You might have noticed a slight discrepancy in the timeline — the reference to 105 years.

The explanation is simple, said Kathy Ward, who grew up on the family farm and has lived in Woodland, California, near Sacramento, since 1986.

Her grandfather, Clyde, moved to Baker City from Diamondville, Wyoming, in 1903. Clyde was 8 years old. His mother had left Wyoming with Clyde and his three brothers after their father died.

In 1915, when Clyde was 20, he raised potatoes on a 4-acre plot his mother had bought near the site of today’s Missouri Flat Grange, east of the intersection of Cedar Street and Hughes Lane at the northeast corner of Baker City.

Kathy said she initially planned to apply for Century Farm status in 2015, to coincide with the centennial of Clyde’s first potato crop.

But in her research she learned that what became Ward Ranches actually officially started in 1919 when Clyde bought 40 acres of farm ground nearby in the floodplain of the Powder River.

The property, which became known as the Ward Home Place, is the area, much of it still cropland, south of Hughes Lane, west of Cedar Street, north of H Street and east of Kirkway Drive.

The house that Clyde built in 1927 on the north side of H Street, along with a barn constructed in 1920, are still used, as are several other buildings from the same era.

Kathy, who earned a degree in agricultural sciences at Oregon State University, has worked in Bayer’s vegetable seed division during her career.

She spent quite a lot of time combing through property deeds and other records while assembling the biography and completing the Century Farm application.

“It was really fun,” she said. “It’s an important part of history.”

Kathy said that although she has lived elsewhere since her college years, she returns often to Baker City with her husband, Harold Crawford.

“We come up every July for Miners Jubilee,” she said. “There’s no Jubilee this year but we came anyway.”

Their father, Ralph, who is also an OSU alumnus, at age 92 is still directly involved in running the operation, managing several irrigation pivots and driving a wheat combine.

Although the Wards’ focus these days is growing crops, the official name of the business — Ward Ranches — reveals another aspect of its history.

The family ran a cow-calf operation for many decades, Kathy said. The Wards still managed a herd when she was growing up in the 1960s and ’70s, and Kathy said she loved to ride horses and herd cattle. She said the family decided in the 1980s that mint had a better return.

After Clyde’s initial purchase of 40 acres in 1919, he and his offspring gradually added acreage.

Clyde named his operation Clyde Ward and Son in 1943 when Alvin, who had been building warships in Portland, returned to Baker City to help run the farm and ranch.

In 1951 it became Clyde Ward and Sons when Ralph, who served in the U.S. Army during the Korean War, joined his father and brother as a full-time farmer.

After Clyde’s death in 1978 the business became Ward Brothers, and in 1980 the family settled on the name that remains, Ward Ranches.

Kathy’s biography catalogs the technological transitions the Wards have adjusted to, from farming largely by hand, to employing horses, then tractors and finally today’s computer controls that precisely direct irrigation water and guide tractors.

Ultimately, though, this is a story about people, Kathy said.

The biography includes a partial list of the dozens of volunteer and community positions members of the Ward family have had over the decades.

It started with Clyde and Leonora, who were charter members of the Missouri Flat Grange, so near that first potato field that Clyde tended.

Kathy wrote that the family has always supported local youth sports, including sponsoring a Little League baseball team for many years and donating use of their equipment to build several local ballfields.

The Wards have donated thousands of potatoes to local events and for many years allowed people to glean potatoes for free following the harvest.

In the 1990s the family granted Baker City a permanent easement along the Powder River south of Hughes Lane to make possible the construction of the Leo Adler Memorial Parkway, a paved path for walkers and bicycle riders.

Alvin, who died Feb. 25, 2017, at age 93, was president of the Baker Valley Irrigation District and was instrumental in the construction of Mason Dam on the Powder River in 1968.

The dam had a dramatic benefit for farmers across Baker Valley by creating Phillips Reservoir, which provides a reliable source of irrigation water. Before the dam, the Powder River sometimes flooded during the spring but by summer its flow dwindled to a trickle.

Alvin reminisced about the pre-dam era in an interview with the Herald during a severe drought in the summer of 2007.

“Back then you knew the water was going to be gone by the end of July,” he said.

Alvin was also the founding president of the Baker County Farm Bureau in 1946.

Alvin’s sister, Charlotte Ward, yet another Oregon State graduate, was a president and life member of Soroptimist International of Baker County, an organization that provides scholarships and other assistance to women.

She was a life member of the Baker County Historical Society. She and her mother, Leonora, bred, raised and trained toy and standard poodles. Charlotte was a 4-H leader for the Bow Wow Barkers dog club.