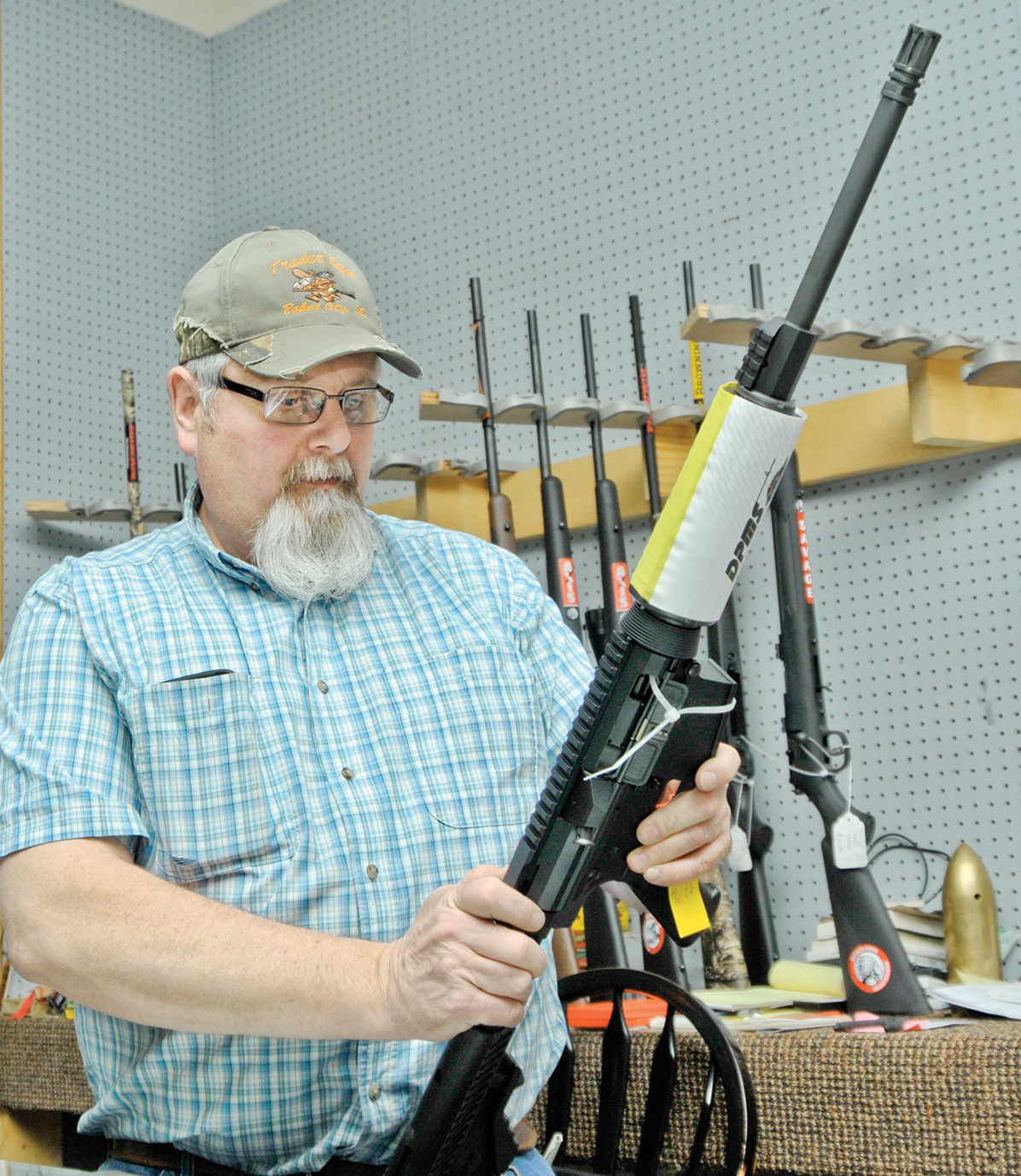 Ray Illingsworth, owner of Trader Ray's in Baker City, handles guns and ammunition at his store on Broadway Street. 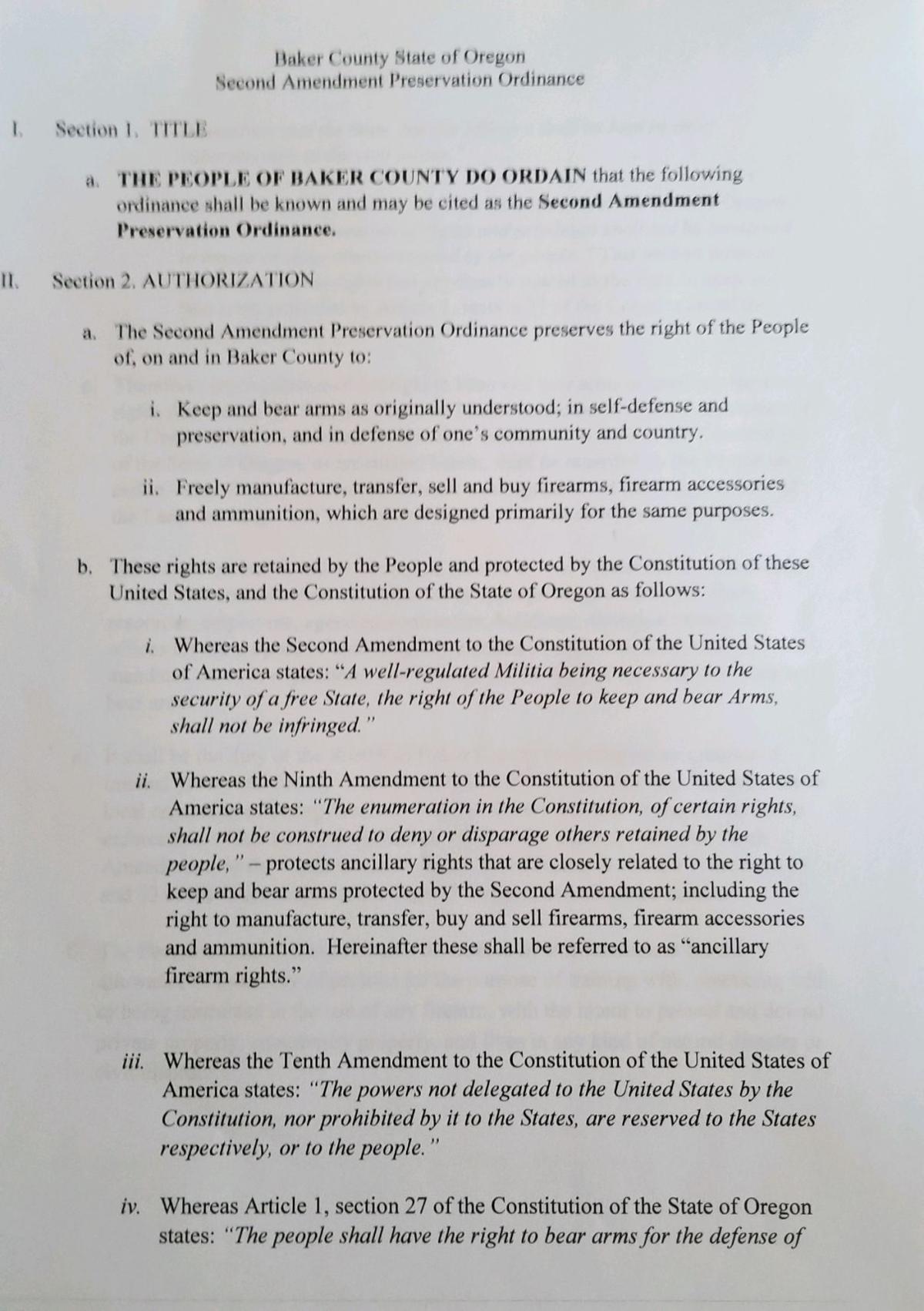 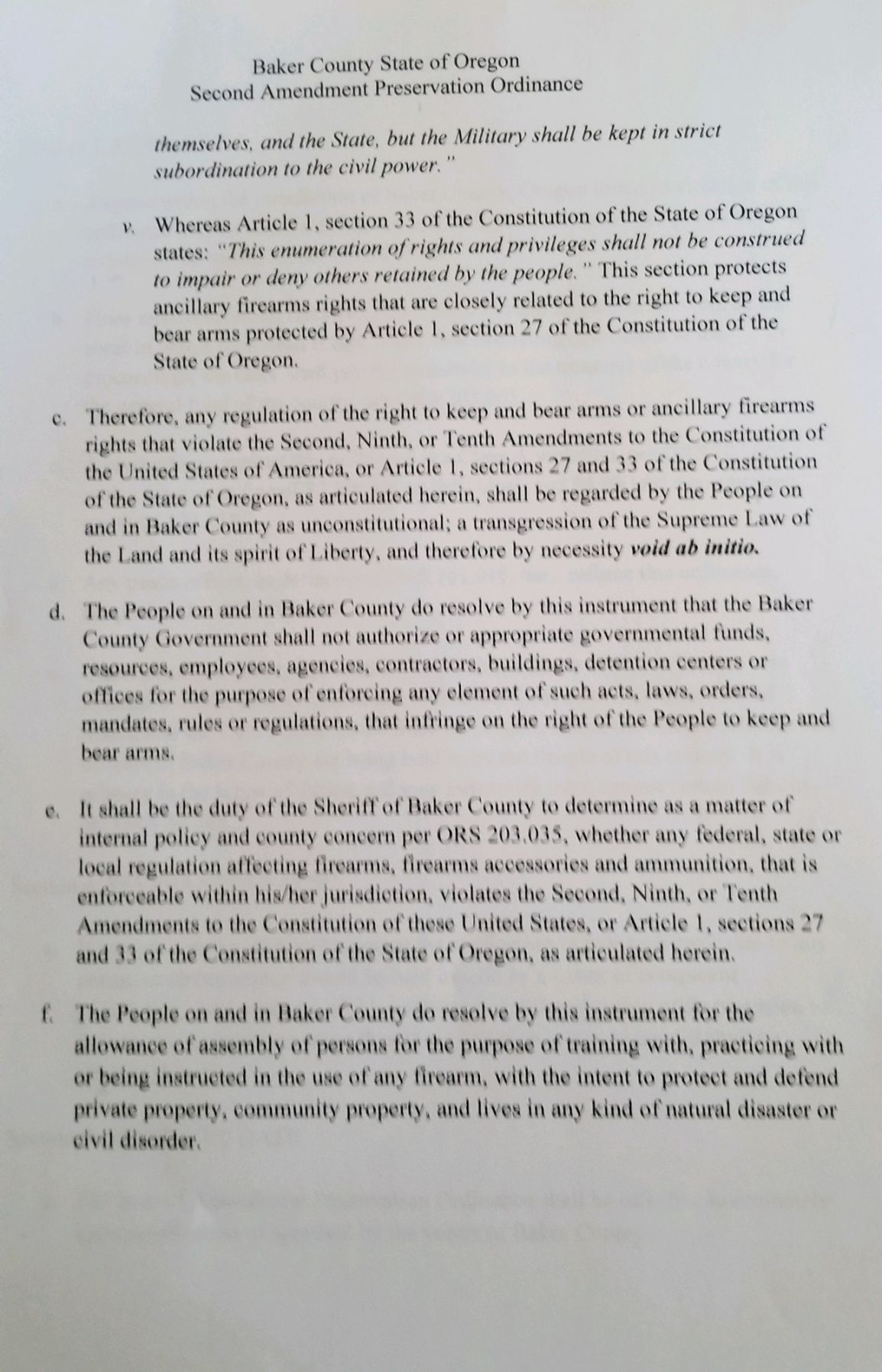 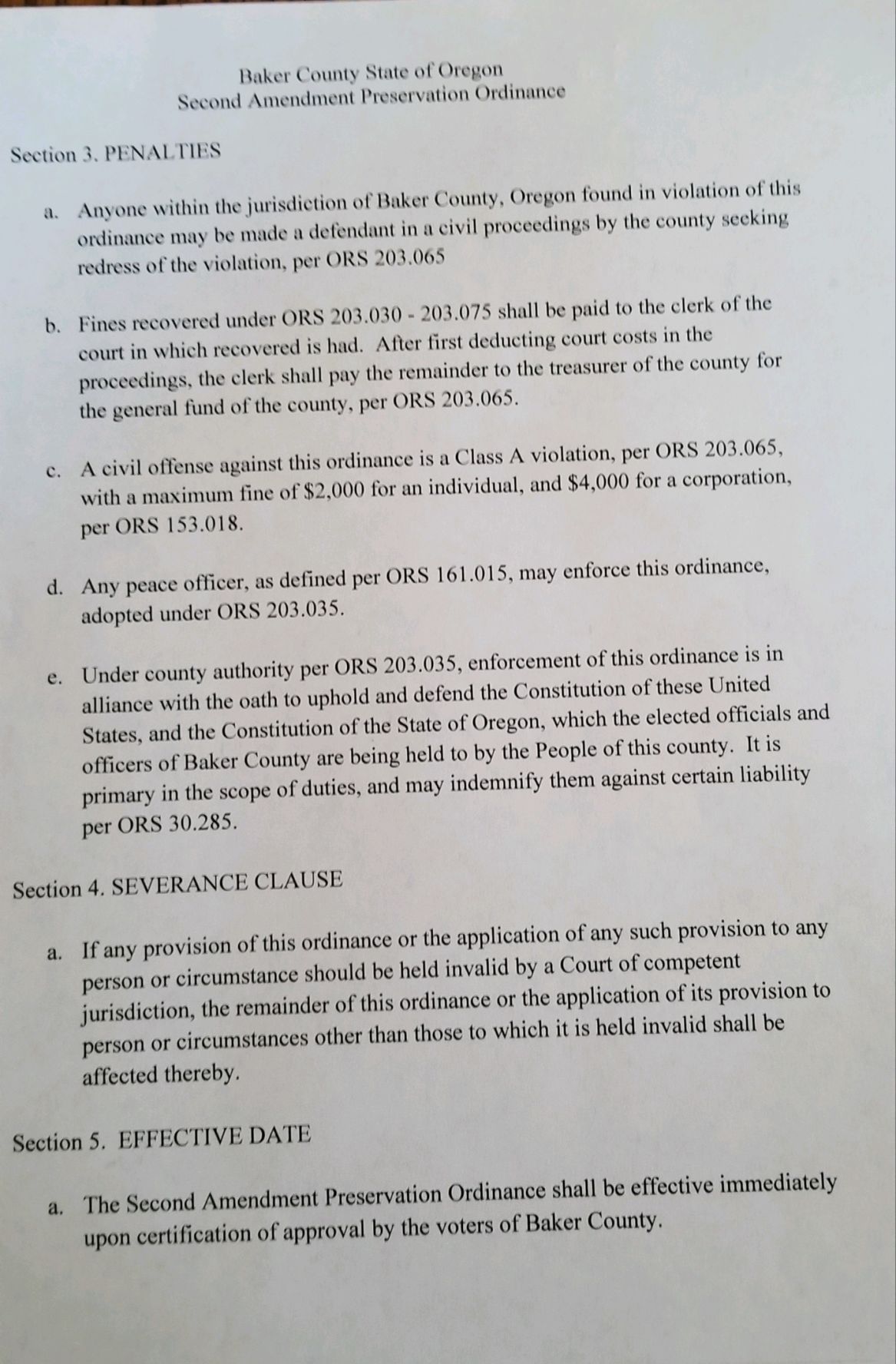 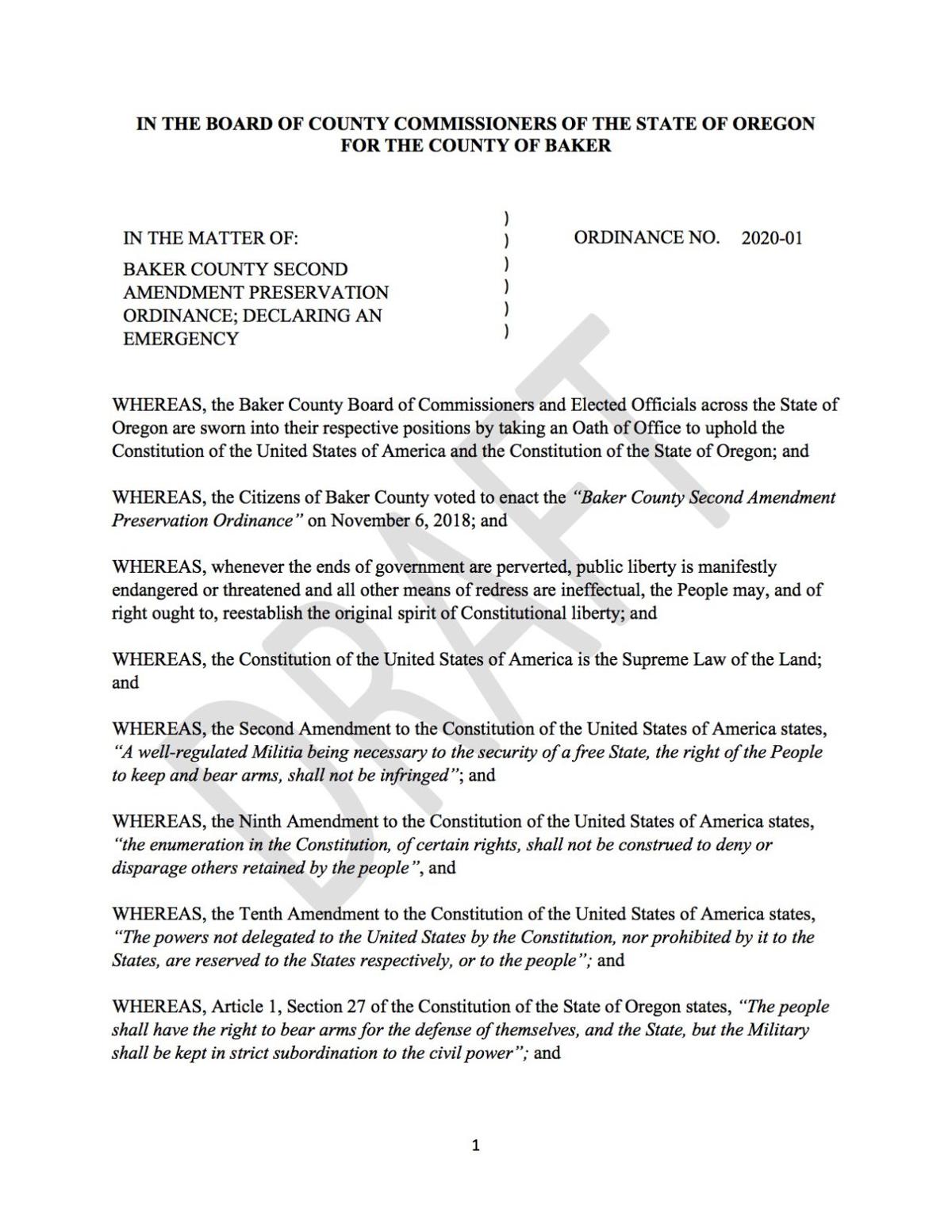 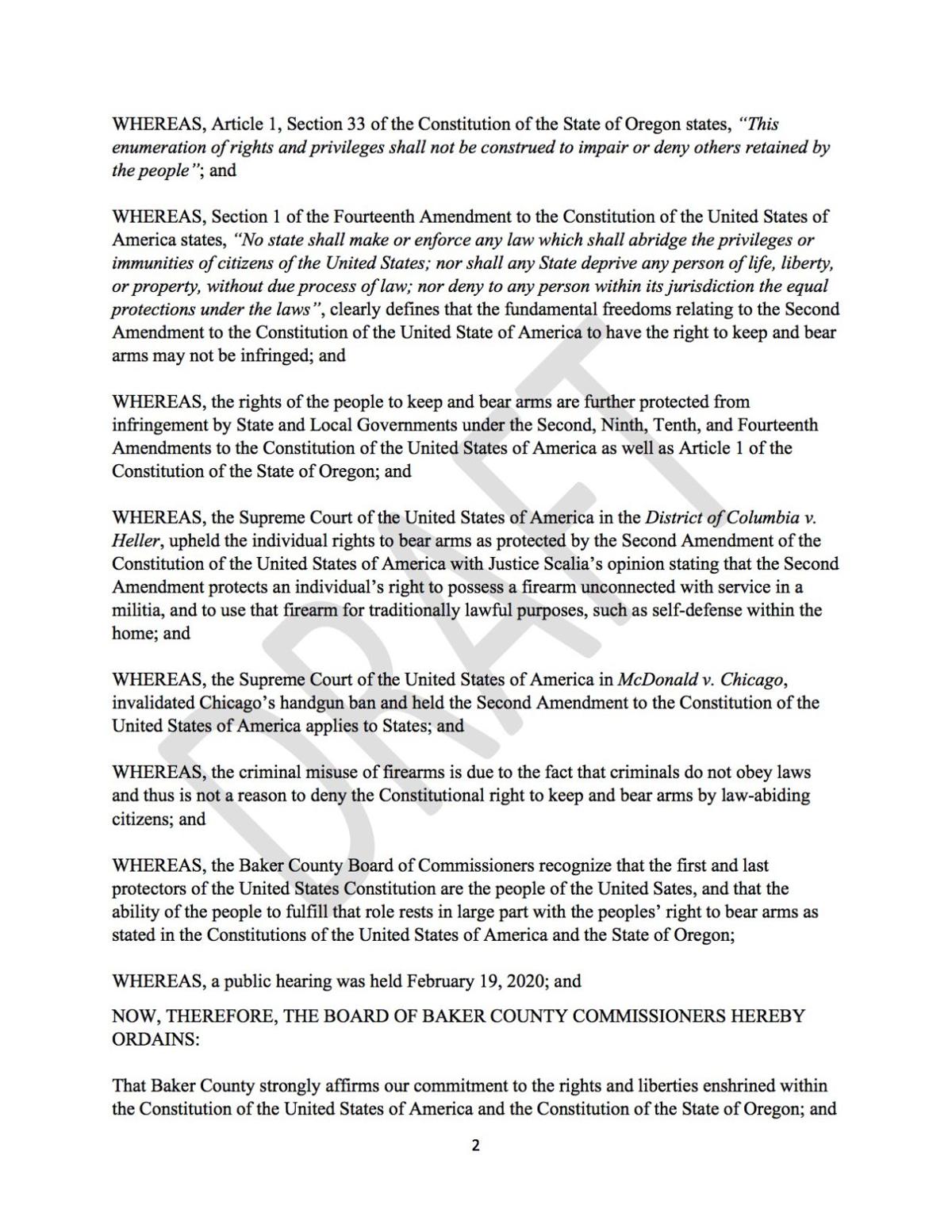 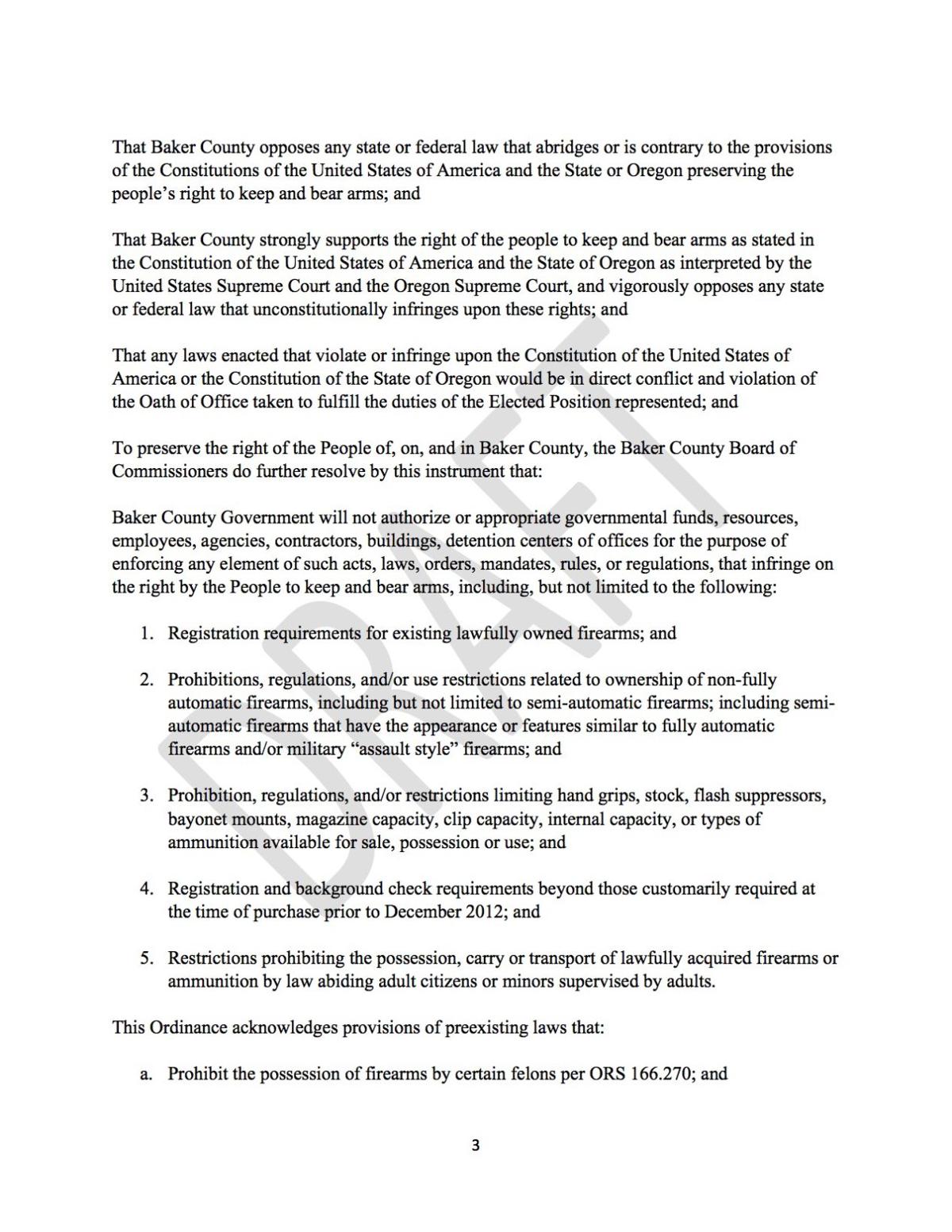 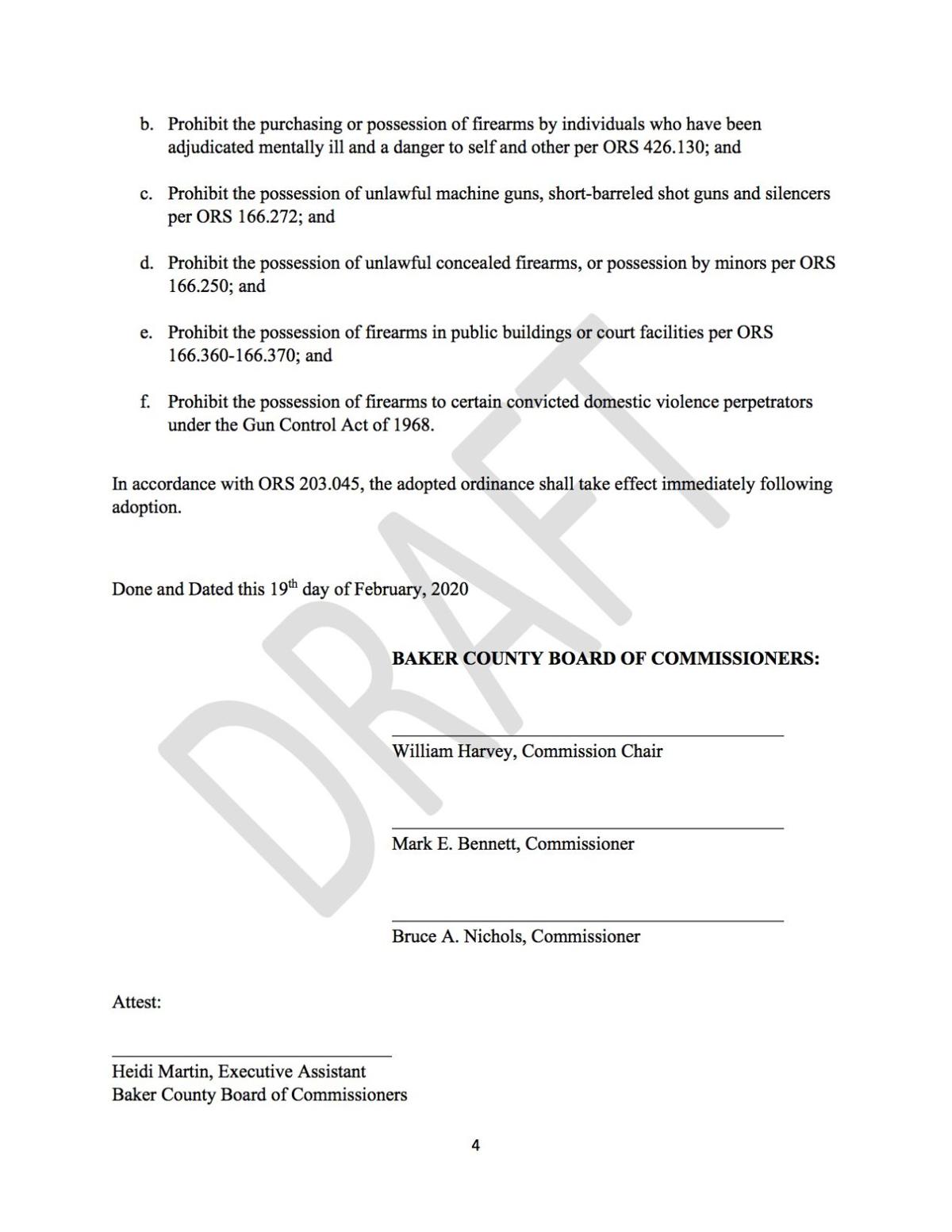 Ray Illingsworth, owner of Trader Ray's in Baker City, handles guns and ammunition at his store on Broadway Street.

What Baker County Commissioner Mark Bennett describes as the result of a “clerical error” has led local Republican Party officials to question whether commissioners were on the verge of approving an ordinance that the GOP officials contend would “dilute” the “Second Amendment Preservation Ordinance” that county voters overwhelmingly approved in November 2018.

Both Bennett and Bill Harvey, chairman of the three-member board of commissioners, said on Monday that that’s not the case.

“There wasn’t any intention for us to rewrite it,” Bennett said of the 2018 ordinance, which county voters approved 5,432 to 2,736. “That’s what the people passed. I can’t apologize enough for the mistake. We did it in good faith.”

A proposed new ordinance posted to the county’s website, www.bakercounty.org, last week was deleted from the website on Monday.

That’s a good thing, according to Suzan Ellis Jones, chair of the Baker County Republican Party and one of the three chief petitioners for the 2018 voter-approved ordinance.

But Jones said Monday that she’s concerned that Bennett and Harvey didn’t contact either her or the two other petitioners — Jake Brown, the Republican Party county vice chair, or Tom Van Diepen, a Republican precinct committee member — before posting on the county’s website a draft of a proposed new ordinance.

That document, titled “Second Amendment Preservation Ordinance” as was the 2018 voter-approved measure, was posted recently on the county’s website, www.bakercounty.org.

The ordinance stated that commissioners would consider, and potentially adopt, the document on Feb. 19, following a public hearing.

Both Bennett and Harvey said that won’t happen.

Bennett said the situation started a couple of weeks ago when he and Harvey were discussing Second Amendment issues, including gun-related bills under consideration in the Oregon Legislature during its 35-day session that started in Salem on Feb. 3.

Bennett said that after asking the county staff for a copy of the 2018 ordinance, he received an incomplete version of the document.

The result, he said, was that Harvey scrambled to draft another ordinance that included more comprehensive protections of citizens’ Second Amendment rights.

The goal, Bennett said, wasn’t to replace or supersede the ordinance that county voters passed in November 2018.

Rather, he said he was concerned that the voter-approved ordinance wasn’t as robust in protecting county residents’ Second Amendment rights as it could be.

“We were just trying to make sure we were doing the will of the voters,” he said.

Bennett said he later realized that his concern wasn’t valid, but was based on reading the incomplete version of the 2018 ordinance that he reviewed.

Once he understood that, Bennett said he realized the 2018 ordinance didn’t need to be supplemented.

“This is a really critical issue for all of us,” he said. “It was just a mistake. I’m sorry that it happened.”

Jones said she received calls starting Friday from residents who saw the new ordinance on the county’s website and were perplexed, given that voters just 15 months ago had passed the Second Amendment Preservation Ordinance.

That prompted Jones, Van Diepen and Brown to send commissioners a list of questions Monday related to the situation.

Jones said her overriding concern was to ensure that commissioners weren’t intending to pass another ordinance.

She said she’d “like to have that in writing.”

But notwithstanding Bennett’s and Harvey’s statements that the 2018 voter-approved ordinance will stand on its own, Jones said she’s still bothered by the episode.

“There’s still questions that need to be answered,” she said.

Chief among those, in Jones’ estimation, is the language in the now-withdrawn draft ordinance.

Jones contends that the document not only wouldn’t have strengthened Second Amendment protections for Baker County residents, but it would have done the opposite.

“If they think that draft would protect Baker City, it would not,” Jones said.

Among her complaints about the draft ordinance are that it lists a series of existing laws restricting or prohibiting ownership of certain types of guns.

In the letter they sent Monday to commissioners, Jones, Van Diepen and Brown wrote of the draft ordinance: “(It) acknowledges a list of unconstitutional gun control laws, which defeats and negates the purpose of this entire draft ordinance.”

Brown said he was concerned that the withdrawn draft ordinance omits the penalty section from the 2018 voter-approved ordinance. That section states that anyone who violates the ordinance’s Second Amendment protections can be subject to a civil fine of up to $2,000 for an individual and $4,000 for a corporation.

Editor's Note: Copies of both the 2018 voter-approved ordinance, and the withdrawn draft ordinance, are among the photos included with this story.

“There wasn’t any intention for us to rewrite it. That’s what the people passed. I can’t apologize enough for the mistake.”

— Mark Bennett, Baker County commissioner, who says a proposal for commissioners to approve a new Second Amendment Preservation Ordinance resulted from a mistake, and the idea has been withdrawn