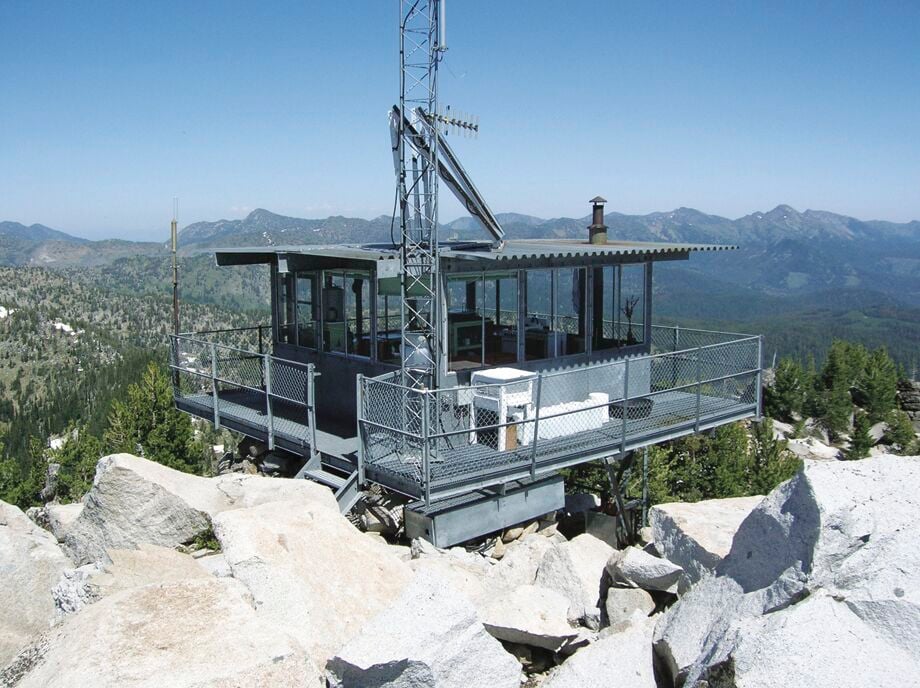 The fire lookout on the summit of Mount Ireland, 8,346 feet, is staffed each summer. The lookout has a view that extends over parts of three national forests — Wallowa-Whitman, Umatilla and Malheur. The metal building replaced a wooden structure in 1957. 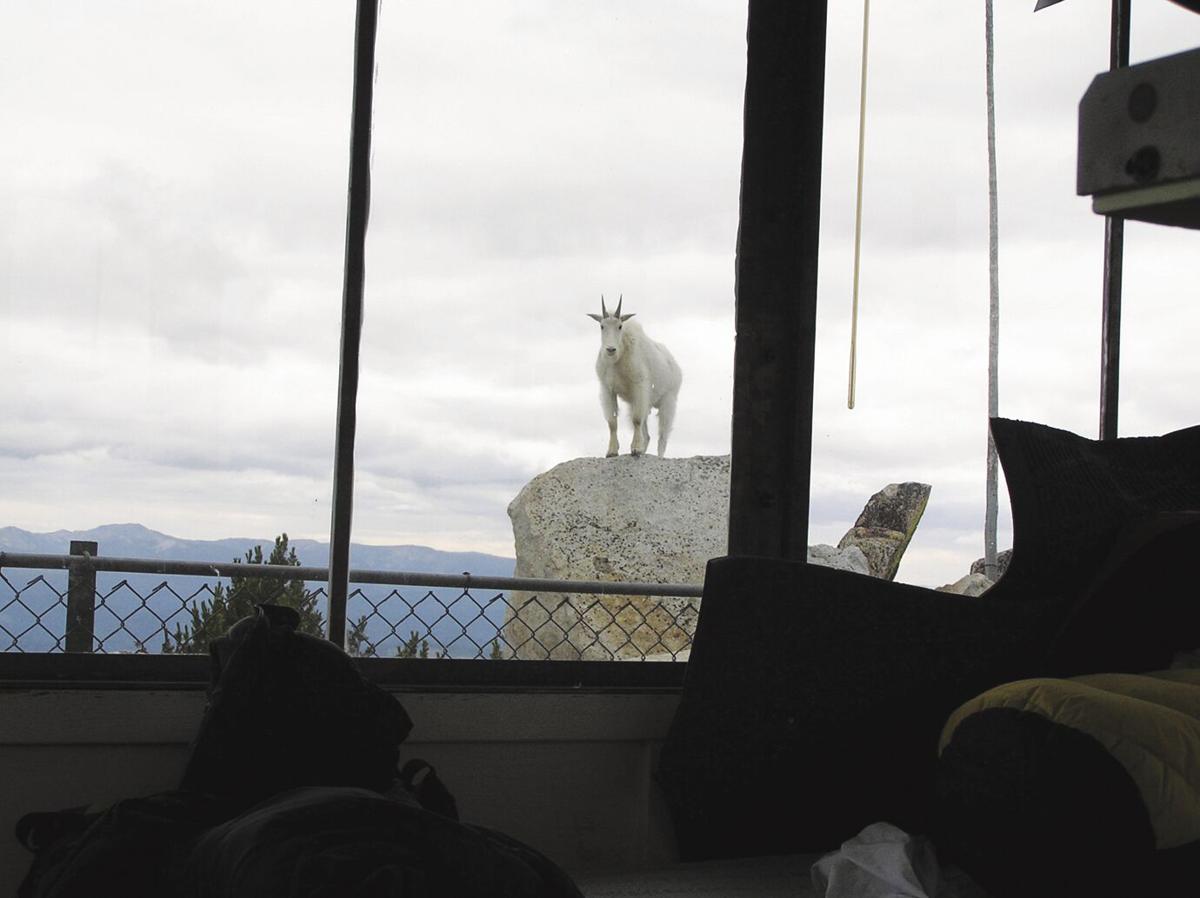 The lookout at Mount Ireland might see as many mountain goats as human visitors.

The fire lookout on the summit of Mount Ireland, 8,346 feet, is staffed each summer. The lookout has a view that extends over parts of three national forests — Wallowa-Whitman, Umatilla and Malheur. The metal building replaced a wooden structure in 1957.

The lookout at Mount Ireland might see as many mountain goats as human visitors.

Joel McCraw needed to find someone willing to spend the summer atop a mountain that has a three-state view but is far out of sight of any coffee shop or grocery store.

The job is fire lookout on Mount Ireland. The 8,346-foot peak is the apex of a granitic shoulder that extends several miles west from the spine of the Elkhorn Mountains and forms the divide between the Powder River and North Fork John Day River basins as well as the boundary between Baker and Grant counties.

Mount Ireland is one of more than a dozen prominences in Northeastern Oregon where the traditional method of finding wildfires — a person working inside a tiny building on a high point, looking for the telltale tendril of smoke — persists.

Several decades ago there were more than 50 lookouts in the region that were staffed each summer.

But over time, with surveillance by airplane more feasible, and a proliferation of roads making it easier for fire crews to access remote areas, most lookouts were closed, and many removed.

Mount Ireland remains a valuable cog in the fire-detection system in part because of its elevation — if you head west from the peak you won’t hit a higher summit until you get to the Cascades.

But its location is also ideal, said McCraw, the fire management officer for the Wallowa-Whitman National Forest’s Whitman District.

From Mount Ireland’s summit, the lookout can see swathes of the Wallowa-Whitman as well as parts of its neighboring national forests, the Umatilla and Malheur, McCraw said. On especially clear days the views extend east into Idaho and north into Washington.

Mount Ireland also overlooks the municipal watershed for Sumpter, where a wildfire could threaten the city’s water supply, McCraw said.

But of course a lookout is only as effective as the person who works there, scanning the hundreds of thousands of acres where a fire could start.

And for the past two years, McCraw has had to scramble to hire someone for the position, which pays about $16.90 per hour.

In 2020, Mount Ireland’s longtime lookout wasn’t able to return to the lofty perch, but McCraw had a fair amount of time to find a replacement.

Typically the lookout doesn’t start work at Mount Ireland until late June or early July, when most of the snow has melted and the wildfire risk begins to rise.

This spring McCraw’s challenge was even more acute.

The lookout he had enlisted for the job backed out late in May.

Then someone suggested to McCraw that he explain his dilemma to associations of fire lookout enthusiasts, of which there are several.

The Oregon Fire Lookouts posted about the situation on its Facebook page on June 4.

McCraw said he has had a “very good response” from the post, and several candidates have been in touch.

McCraw said on Wednesday, June 9 that he will be able to fill the vacancy in time to have Mount Ireland staffed.

The person he hires will have an interesting summer, to be sure. Mount Ireland is pretty remote even by lookout standards.

You can’t drive to the peak.

The roughly 3 1/2-mile hiking trail offsets its modest distance with a significant elevation gain of 2,300 feet — roughly equivalent to climbing the Astoria Column about 18 times.

The nearest settlement is Granite, about eight miles from the trailhead. Sumpter is about 15 miles.

McCraw said the Forest Service each year hires a helicopter crew to haul in water, propane and other supplies to the lookout. A technician checks the radio equipment on the peak, which includes an antenna and a repeater.

The Mount Ireland lookout usually works until mid to late September, depending on the weather.

Snowstorms are possible in any month at that elevation, but McCraw said in some years dry weather persists into October so the lookout stays on duty through deer season.

Except the peak wasn’t called Mount Ireland then.

According to Ray Kresek’s comprehensive book, “Fire Lookouts of Oregon and Washington,” on Aug 28, 1915, just a decade after the Forest Service was created, agency employees Charles F. Groom and C.C. Davenport climbed the mountain and established a “rag” camp on the white granitic boulders that make up its summit.

At that time it was called Bald Mountain.

On Jan. 25, 1917, the Oregon Geographic Board petitioned the federal government to rename Bald Mountain as Ireland Mountain. The honoree was not the island off the west coast of England, but a man — the late Henry Ireland, former supervisor of the Whitman National Forest, which includes his namesake peak, who died May 31, 1916. (The Wallowa and Whitman national forests were combined in the early 1950s.) The U.S. Geographic Board approved the change, and at some point later the agency went with the current form, Mount Ireland, rather than the original Ireland Mountain.

The first lookout structure, a simple cabin with a flat roof to facilitate the lookout’s work, was built in 1916. A cupola was added to the cabin in 1928, according to contemporary newspaper reports.

The original cabin was removed in 1957 and replaced by the current lookout — a much different structure made of steel with the expansive glass windows typical of lookouts.

Unlike many lookouts, which are perched atop a tower to get above nearby trees, Mount Ireland needs no such artificial means. Besides being the tallest point in the vicinity, the mountain’s summit is bare stone, the only trees being whitebark pines stunted by the nearly arctic climate and frequent strong winds.