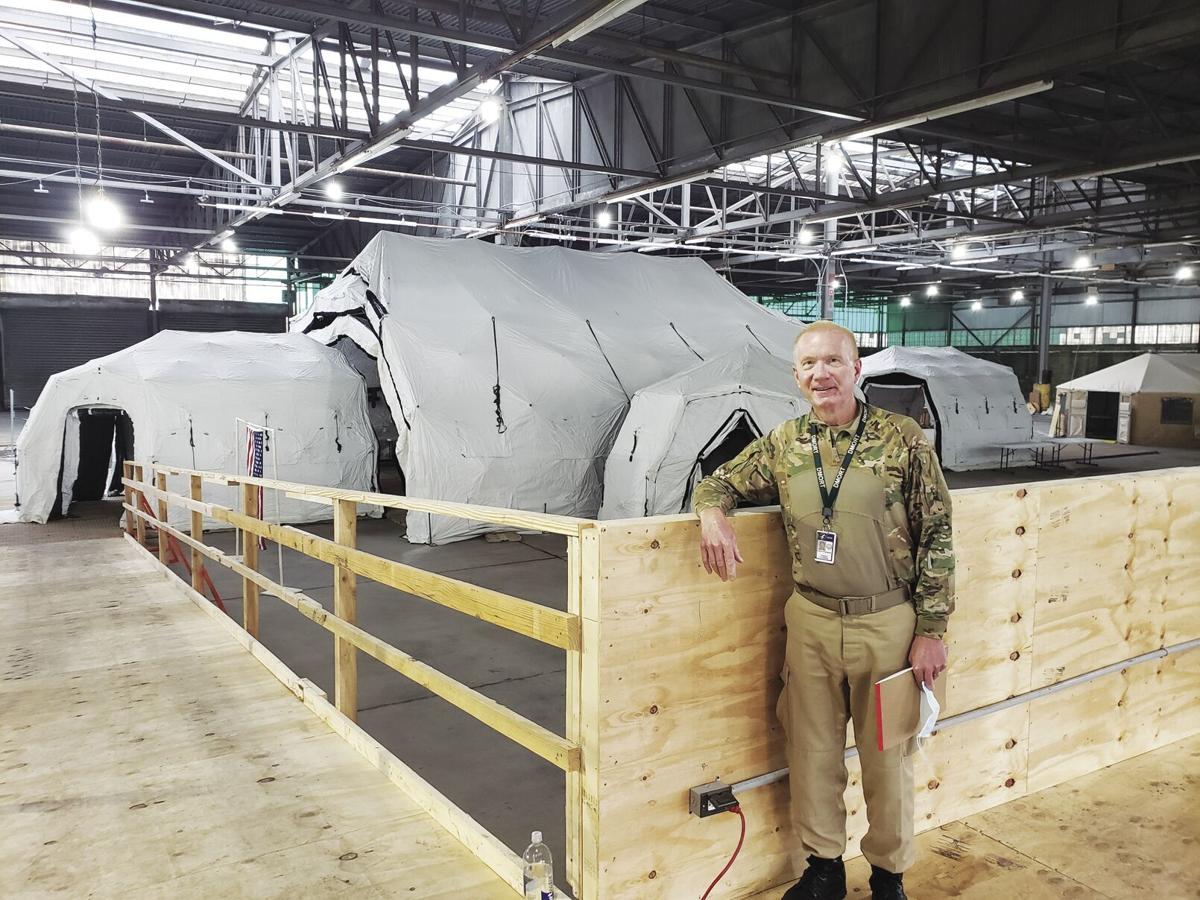 Deon Strommer stands next to a portable morgue set up in New York City during the spring of 2020. 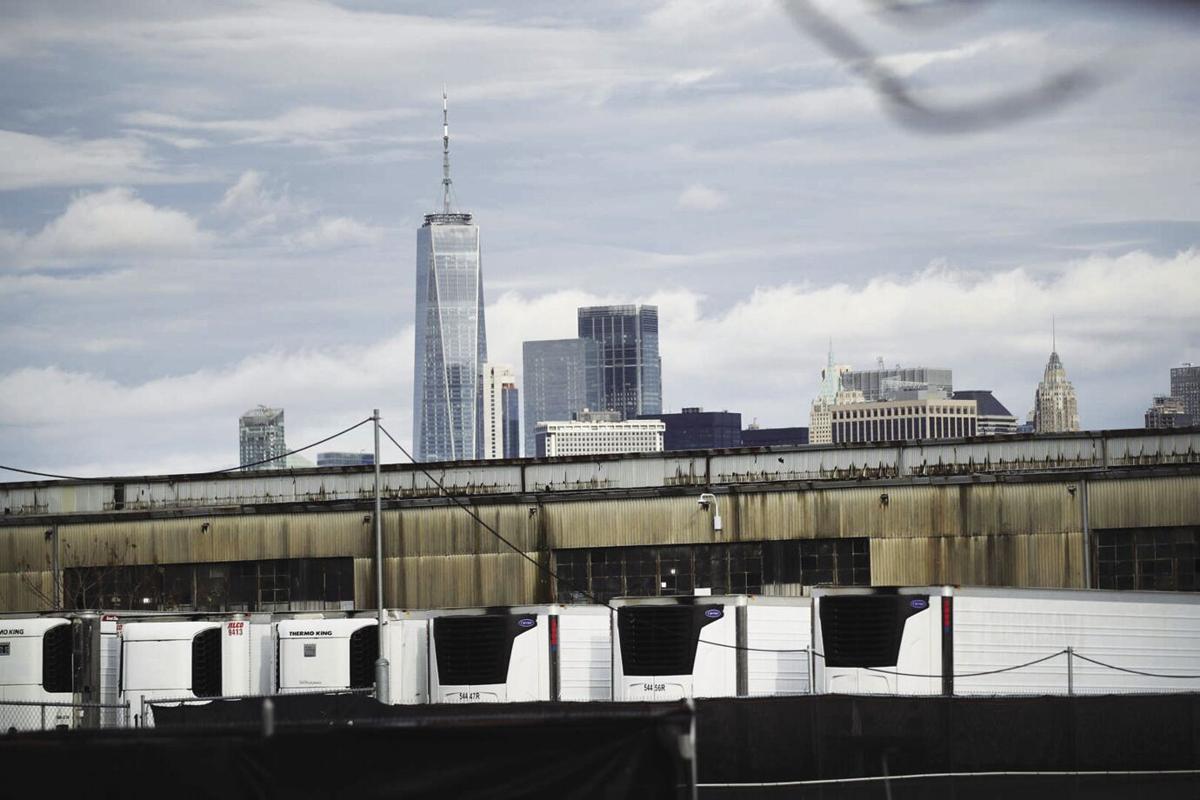 The Manhattan skyline, including One World Trade Center at left, with a row of refrigerated trailers used to store the bodies of COVID-19 victims in New York City during the spring of 2020. 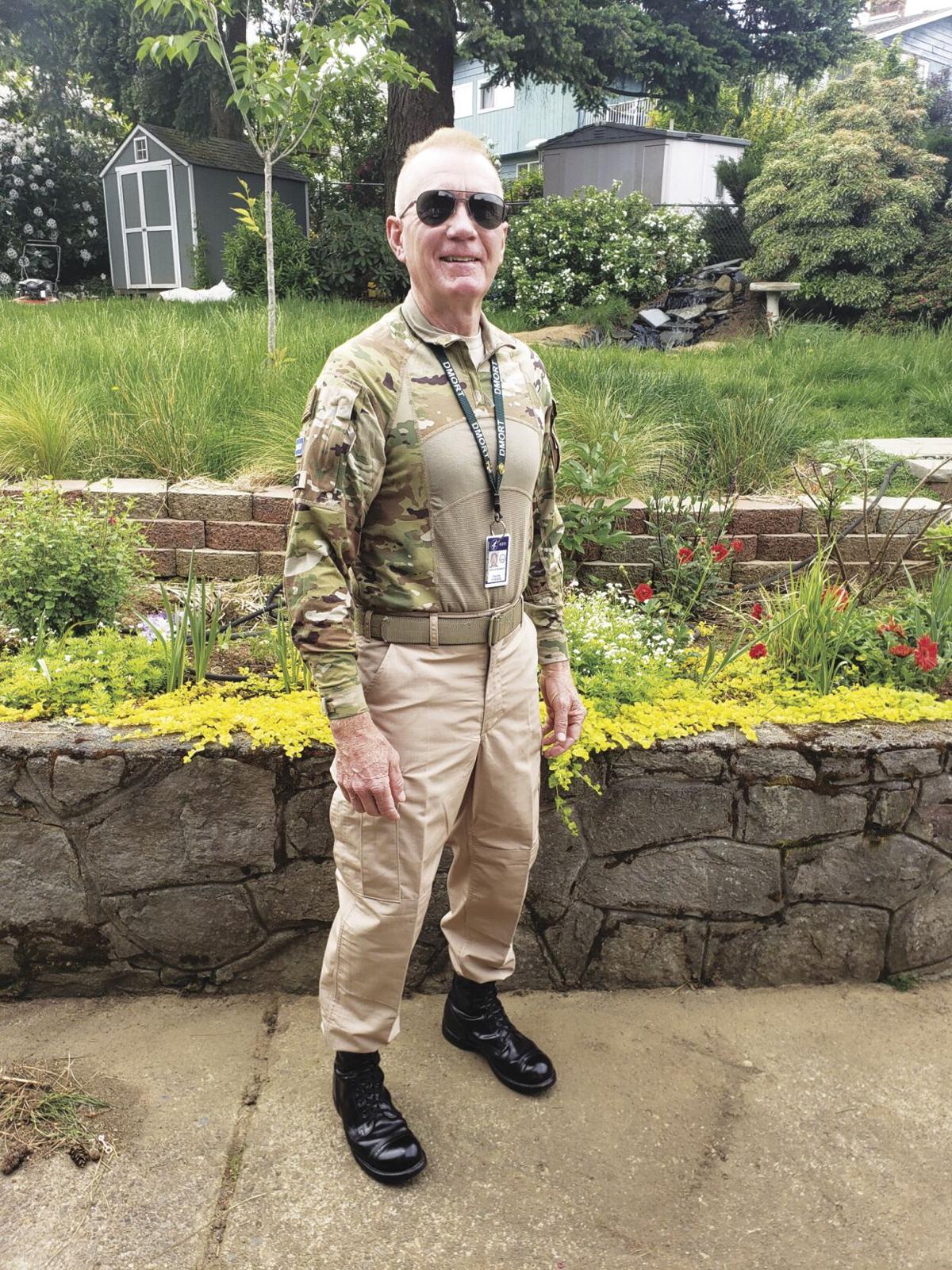 Deon Strommer just before he deployed to New York City in late March 2020. 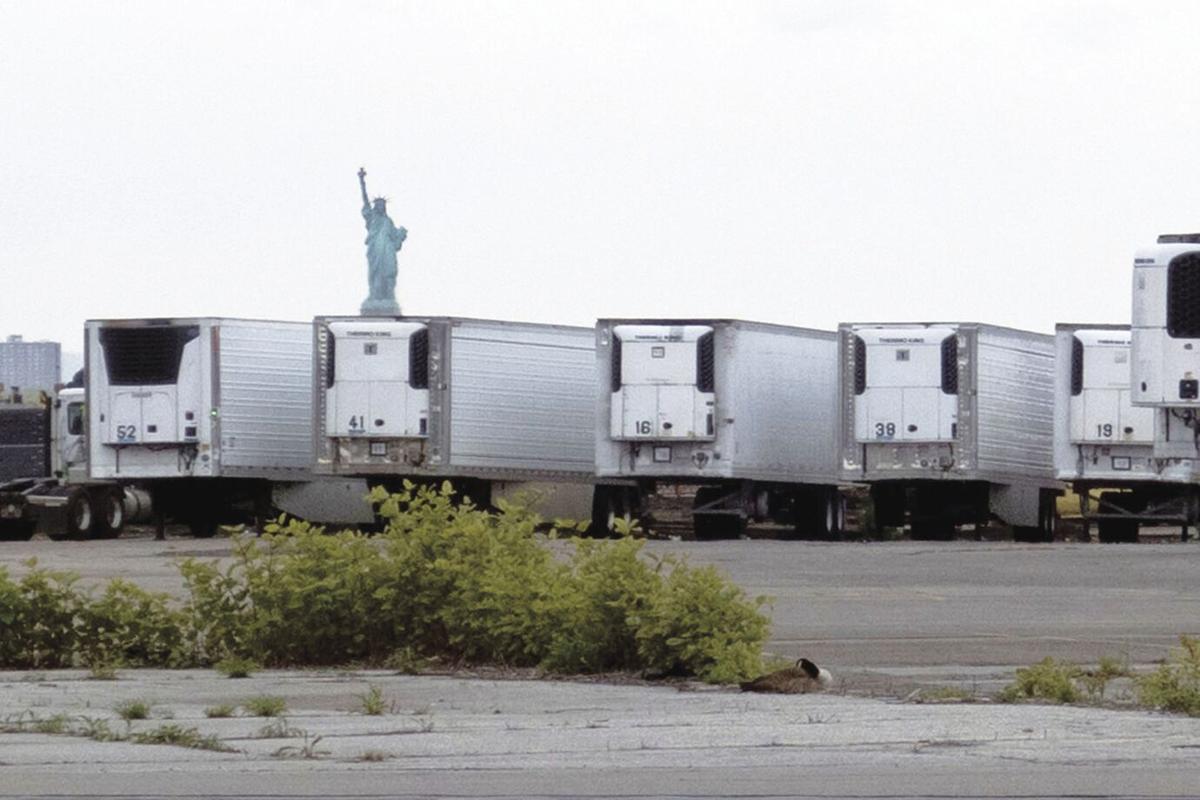 Refrigerated trailers, used to store the bodies of COVID-19 victims in New York City during the spring of 2020, with the Statue of Liberty in the background. 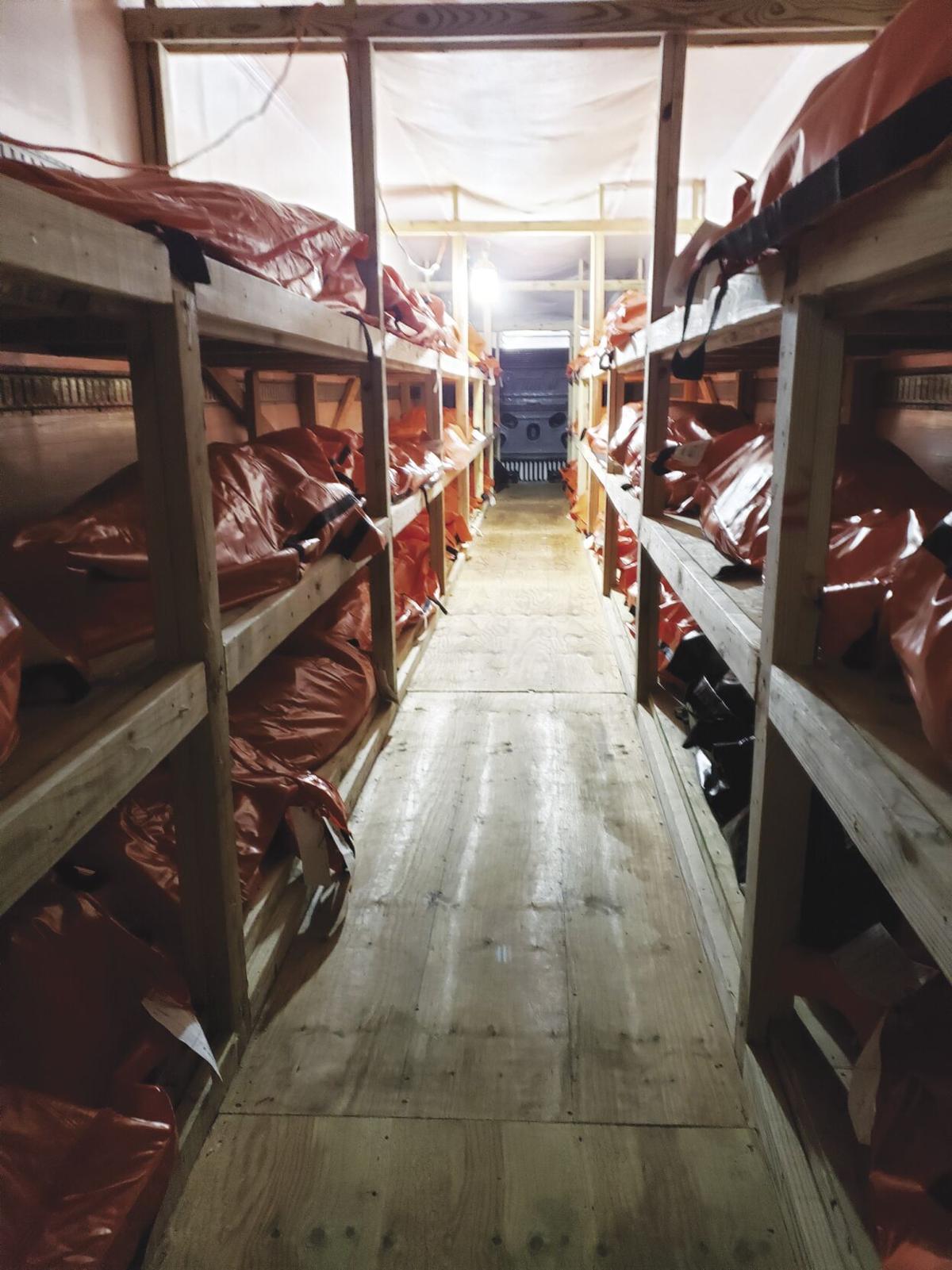 Bodies of COVID-19 victims in a makeshift morgue in New York City during the spring of 2020. 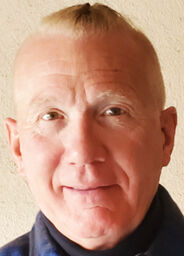 Deon Strommer stands next to a portable morgue set up in New York City during the spring of 2020.

The Manhattan skyline, including One World Trade Center at left, with a row of refrigerated trailers used to store the bodies of COVID-19 victims in New York City during the spring of 2020.

Deon Strommer just before he deployed to New York City in late March 2020.

Refrigerated trailers, used to store the bodies of COVID-19 victims in New York City during the spring of 2020, with the Statue of Liberty in the background.

Bodies of COVID-19 victims in a makeshift morgue in New York City during the spring of 2020.

While Baker County had yet to report its first COVID-19 case in the spring of 2020, Deon Strommer was seeing the bodies of virus victims stacked atop one another in New York City.

It was an experience Strommer, who lives near Baker City, will never forget.

And it was an experience that continues, more than a year and a half later, to influence his attitude about the pandemic.

Having seen firsthand some of the worst effects of COVID-19 anywhere in America, Strommer is a staunch advocate of vaccination and of face masks.

“I try to understand both sides, but I think if people could see what I have seen ...” Strommer, 63, said in an interview on Tuesday, Sept. 28. “I have a high sensitivity about COVID. I saw a whole different facet of it.”

Strommer’s work in New York City, and in other places in the early stages of the pandemic in 2020, stem from his profession as a funeral director.

He moved to Baker City in 1987 and has been in the mortuary business for nearly 40 years. He and his wife, Amy, moved to Portland about 12 years ago, where he owned a mortuary service that included conducting cremations and helping funeral homes.

But the couple kept their home near Baker City and visited frequently.

“We always intended to retire in Baker City,” Strommer said. “It’s great to be back in the community and to reconnect with people I haven’t seen in a long time.”

Although most funeral directors devote most of their time to helping grieving families, some also fulfill a different role — helping to process, care for and in some cases identify the bodies of victims of natural disasters and other events involving large numbers of deaths.

Strommer said he was contacted by an official from the Federal Emergency Management Agency after the terrorist attacks of Sept. 11, 2001. Although he was on a list of mortuary professionals, he was never called to New York City to assist in that disaster.

But the next spring, while attending a conference of the Oregon Funerals Directors, Strommer learned about the Disaster Mortuary Operational Response Teams.

These are groups of experts, including morticians, who travel across the nation, and sometimes abroad, when a large number of deaths in a short period overwhelms the capacity of local mortuaries.

Strommer joined one of these teams in 2002 and he’s been a member since.

He likened the teams to the National Guard, as members are temporary federal employees who are dispatched as needed.

In the past 19 years Strommer has deployed to places devastated by hurricanes, including New Orleans after Hurricane Katrina in 2005, and in Puerto Rico and Haiti.

On Jan. 31, 2020, while he and Amy were in Portland, preparing for their retirement and return to Baker City, Strommer got a call to fly to Travis Air Force Base north of San Francisco.

His team’s task was to help U.S. citizens who were returning from Wuhan, China, and thus potentially infected with a virus few people outside the research community had then heard of.

Strommer said the team was dispatched not because officials expected a large number of deaths, but because team members were trained both in wearing personal protective equipment and in helping people in emotionally difficult situations.

During his two weeks or so at Travis, Strommer said his chief job was to help people get off the planes that brought them from China, and to assist them while they quarantined in housing on the Air Force base.

He said he carried about 70 children younger than four down the portable stairs that were used for deplaning — not being an airport, there were none of the movable tunnels that commercial airline passengers are accustomed to navigating.

Although COVID-19 was not yet a major story in the U.S., the citizens who were returning from Wuhan understood the risk, Strommer said.

“We didn’t know much about the virus in those first few days,” he said. “They were scared.”

But they were also ecstatic to be back in the U.S.

“Many people when they deplaned kissed the tarmac,” Strommer said.

Later in February 2020, Strommer was deployed to Dobbins Air Force Base in Georgia. That base and three others were the temporary homes for hundreds of passengers from cruise ships that had been quarantined when they reached American docks.

Strommer said about 400 of the 1,500 former passengers at Dobbins during his stint there became sick, and eight died.

He returned to Oregon on March 30. In the meantime Amy had returned to their home near Baker City.

“We were moving back anyway, and we felt like she was safer here,” Strommer said.

Baker County’s first confirmed case was reported on May 6, 2020.

One day after returning, March 31, 2020, Strommer’s team was sent to New York City, and specifically Manhattan.

The Big Apple was the unfortunate epicenter of the pandemic in those early weeks, with comparatively high death rates.

A week after Strommer arrived, on April 7, 2020, a total of 815 New York City residents died from the virus, the city’s highest one-day total.

“They were overwhelmed” Strommer said of the city’s mortuary services.

And Strommer, who was designated as morgue operations manager for his group, felt the same.

“I was overwhelmed by the sheer numbers,” he said. “I’ve been doing this 40 years and one day I had to take a knee. It’s a shock to your system. It’s just not natural.”

Although most of the victims were 65 or older, Strommer said he also saw children, as young as 3 and 6, die from COVID-19.

As officials struggled just to find places to keep bodies, Strommer saw things that were beyond his experience, including after natural disasters.

He saw body bags stacked atop one another because there had been no time to build shelves.

He saw arms and legs dangling from body bags.

“It was amazing how quickly the system became overwhelmed,” Strommer said. “Dignity for decedents goes out the door.”

Officials buried hundreds of people — not all of them COVID victims — in mass graves on Hart Island, just off the coast of the Bronx.

Strommer said some funeral homes simply stopped answering their phones because they had no capacity.

He praises the National Guard soldiers he worked with who were charged with removing bodies from homes and from apartment buildings, some of the latter lacking elevators despite being 10 or more stories tall.

“Moving bodies is physical work,” he said. “I give all the credit to these young men and women, who had never seen anything like this.”

During the worst days of the pandemic, Strommer said he depended heavily on frequent phone conversations with his wife.

He said he can cope with emotionally trying circumstances only by talking about his feelings.

“Those became very important conversations at night, just to allow me to talk about it,” he said. “Amy’s always been good at that.”

The worst phase of the crisis had ended before Strommer left New York City on June 6, 2020, and returned to Baker City.

Although he stayed busy with household chores — building fences, chopping firewood — he struggled to cope with the things he had seen.

Strommer observed autopsies of COVID-19 victims. He was struck by how the disease ravaged lungs in particular.

“It took me several weeks, if not months, to get over it,” he said.

But Strommer’s memories aren’t all horrific.

He recalls the couple from Brooklyn whom he met at Dobbins Air Force Base, where they were quarantined after disembarking from a cruise ship.

When the couple learned later in the spring of 2020 that Strommer was working in New York City, they insisted on bringing him boxes of food and pre-prepared meals.

“You took care of us, and we want to take care of you,” the couple told him.

Strommer hasn’t been dispatched to any COVID-related emergencies since returning from New York City in June 2020.

He did work in Western Oregon during the historic fires in September 2020.

And although he will never forget the terrible things he saw in America’s biggest city, he will also continue to cherish the relationships he made, and the selflessness he saw in so many people.

“Most of all I would say it is an honor to serve people in this unique way during the worst of times in their lives,” he said.

“I was overwhelmed by the sheer numbers. I’ve been doing this 40 years and one day I had to take a knee. It’s a shock to your system. It’s just not natural.”

— Deon Strommer, talking about the number of COVID-19 deaths in New York City during the spring of 2020