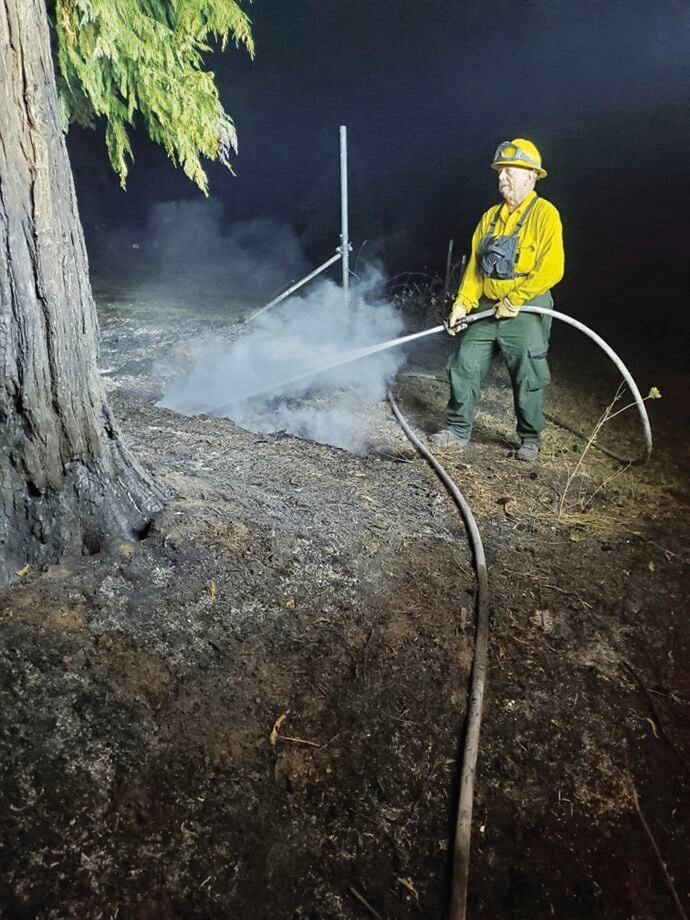 Richard Cochran, a volunteer with the Baker Rural Fire District, works on a hot spot near Estacada in September. Cochran, along with Baker City Fire Department firefighters B.J. Lynch and Andrew Snodgrass, spent a week working on fires near Estacada, part of the worst rash of wildfires in Oregon history. 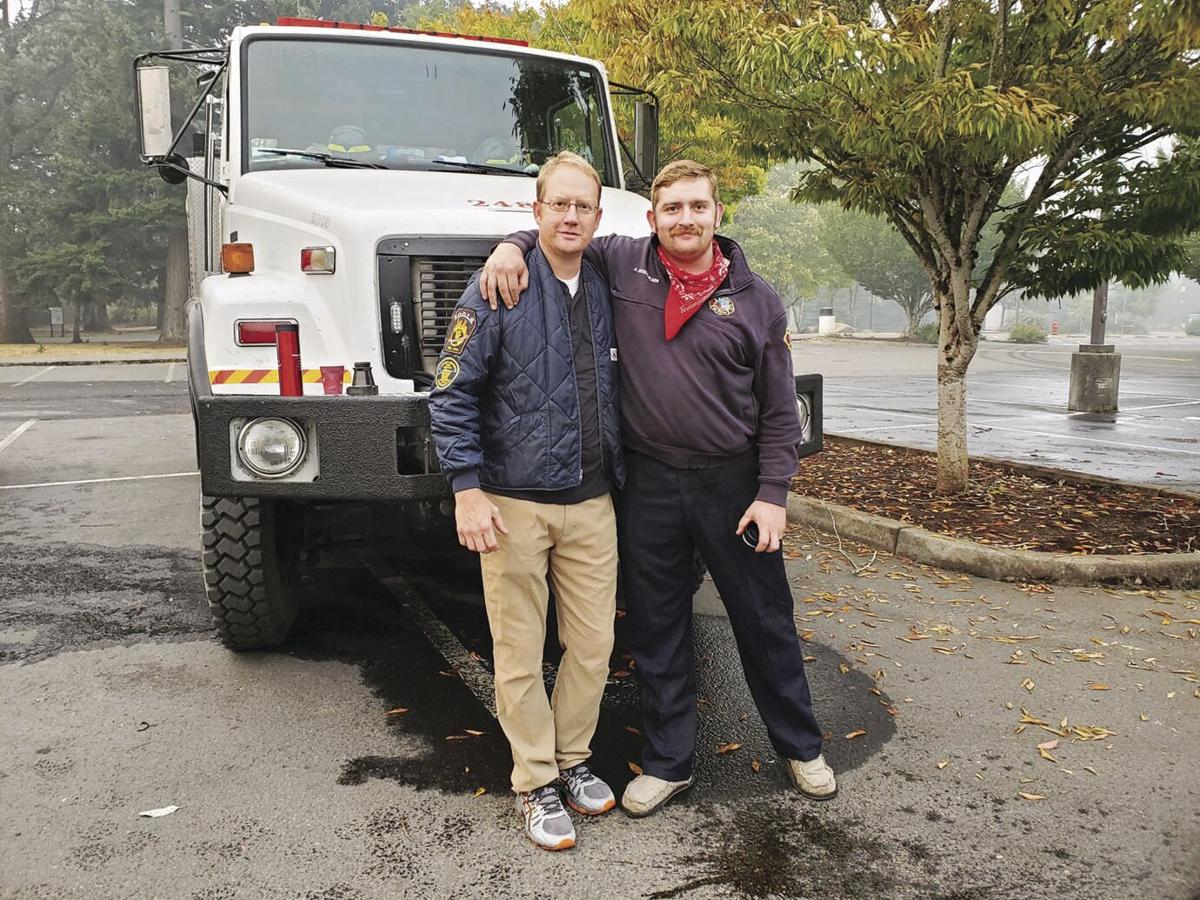 Richard Cochran, a volunteer with the Baker Rural Fire District, works on a hot spot near Estacada in September. Cochran, along with Baker City Fire Department firefighters B.J. Lynch and Andrew Snodgrass, spent a week working on fires near Estacada, part of the worst rash of wildfires in Oregon history.

If the sign hadn’t survived, B.J. Lynch wouldn’t have known the pile of ashes was once a church.

He couldn’t have known.

One pile of ashes looks pretty much like another.

The juxtaposition of that sign, standing beside a building that no longer existed, was one of the more poignant scenes Lynch saw during a memorable week fighting one of the fires that ravaged parts of western Oregon in early September.

Lynch, who has worked at the Baker City Fire Department for 17 years, accompanied by fellow Baker City firefighter Andrew Snodgrass and Richard Cochran, a volunteer with the Baker Rural Fire District, took one of the city’s fire trucks to Estacada, about 20 miles southeast of Portland.

The trio left Baker City on Sept. 10 and spent the next week in the Estacada area.

And although they mainly worked the night shift, the Baker County residents saw devastation that shocked them.

“I have seen stuff burn up, structures here and there, but just the massive amounts ...” Lynch, 45, said. “We saw so many burned out structures.”

In many cases, he said, the only recognizable part of the structure left was a metal roof resting atop a layer of ash.

Snodgrass had a unique perspective among the Baker City trio.

Snodgrass, 28, grew up near Gresham, just a dozen or so miles from Estacada. Many of his high school friends had to evacuate or were on alert.

But Snodgrass also lived in Southern California for 7 years, attending college and working for a private ambulance company, before he moved to Baker City almost 3 years ago.

“But I never would have anticipated seeing that in my hometown,” Snodgrass said.

Cochran, who lives in Baker City, also had a personal connection to the fires.

He used to live in McMinnville, southwest of Portland, and he has friends in Estacada.

Cochran, 64, said that during his 3ﬁ years with the Baker Rural Fire District, he has dealt with haystack fires and other relatively small fires.

What he saw while working on the Riverside fire near Estacada was altogether different.

“It was my first time on anything like that,” Cochran said.

One aspect of the experience that stands out for Cochran was the difficulty in extinguishing fires started by embers landing on creosote-laden railroad ties that many residents use for landscaping.

“Some people have a lot of these on their property,” Cochran said.

Once fire started in one of the ties, firefighters had to chop the dense wood into pieces to get at the fire inside, he said.

They went in The Beast.

That’s the nickname Baker City firefighters bestowed on the 2003 Freightliner fire truck the city acquired in 2018.

The truck, which formerly was part of the firefighting fleet of the Oregon Department of Forestry, is an imposing vehicle. It has four-wheel drive and its tires are taller than most kindergartners.

Lynch, who drove The Beast as the trio left Baker City, said he wondered how poorly suited the massive truck would be for freeway travel.

He was pleasantly surprised.

“Those mudslinging tires wander a big if you’re in those semi-truck ruts in the right lane, but it actually did way better than I expected,” Lynch said.

The group arrived at Estacada around 7:30 p.m. that evening. Lynch said the fire official who briefed them on the situation and then assigned them to a duty area had been working almost without a break for 3 straight days.

Lynch, Snodgrass and Cochran worked through the night, ending their shift around 8 a.m. on Friday, Sept. 11.

Lynch said they extinguished one major flare-up that first night, which they spent near the intersection of Highways 224 and 211, close to the Clackamas River.

Although The Beast can haul around 500 gallons of water, Lynch said the Baker County trio was part of a task force that included a water tender, so the truck had a nearly unlimited water supply.

Its pumps can push 500 gallons per minute through its network of hose nozzles.

Lynch, Cochran and Snodgrass all emphasized the difficulty of fighting fires on nights when the combination of cloying wildfire smoke, later exacerbated by plain old pea soup fog, didn’t so much reduce visibility as eliminate it.

“You couldn’t see 10 feet in front of you,” Lynch said. “It was amazing how thick it was.”

Cochran: “I couldn’t even tell where I was some of the time.”

Snodgrass’ personal ties weren’t limited to his having grown up nearby.

His parents, Michael and Karie Snodgrass, live near Gresham. And Michael is a firefighter with the Gresham Fire Department.

For one shift, Snodgrass, Cochran and Lynch ended up working right next to the task force that Michael Snodgrass was a member of.

“It was super cool that we were able to experience fire camp together, and work almost side by side,” Andrew Snodgrass said.

The Baker City crew was even able to send a shopping list to Karie Snodgrass. She brought the items — protein-rich snacks, for instance — to the fire camp.

Cochran said he was “amazed” at how many people volunteered to help people displaced by the fire, and to support the hundreds of firefighters.

“People really stepped up to the plate,” he said.

He was especially touched by the many residents, some of whom had lost their homes, who filled coolers with drinks and snacks and set them out for firefighters.

“They didn’t have to do that but they did that,” Cochran said. “Just great people. Some of them lost everything they owned, literally everything. That was heart-wrenching.”

All three of the Baker City firefighters said they were glad they had a chance to help people during the most catastrophic wildfires in Oregon history.

Lynch said he will always remember the firefighters who arrived from across the state to help fight the Cornet-Windy Ridge fire that burned 104,000 acres south of Baker City in August 2015. That lightning-sparked blaze, the biggest in the county’s history, destroyed one home in Stices Gulch.

He said it was an easy decision to go west.

“We’ve got to go help our fellow Oregonians,” said Lynch, who grew up in The Dalles. “We got to repay our debt is the way I look at it.”

Snodgrass, whose parents were in a Level 2 evacuation status for a time (be prepared to leave), said the situation was unprecedented.

“No one in the state of Oregon has experienced fire behavior like what was going on,” he said.

Cochran said he was happy to help people who had suffered losses he could scarcely imagine.

“It was devastating, it really was, to see people lose their homes,” he said. “I’m glad to be helpful. I was glad to be there.”