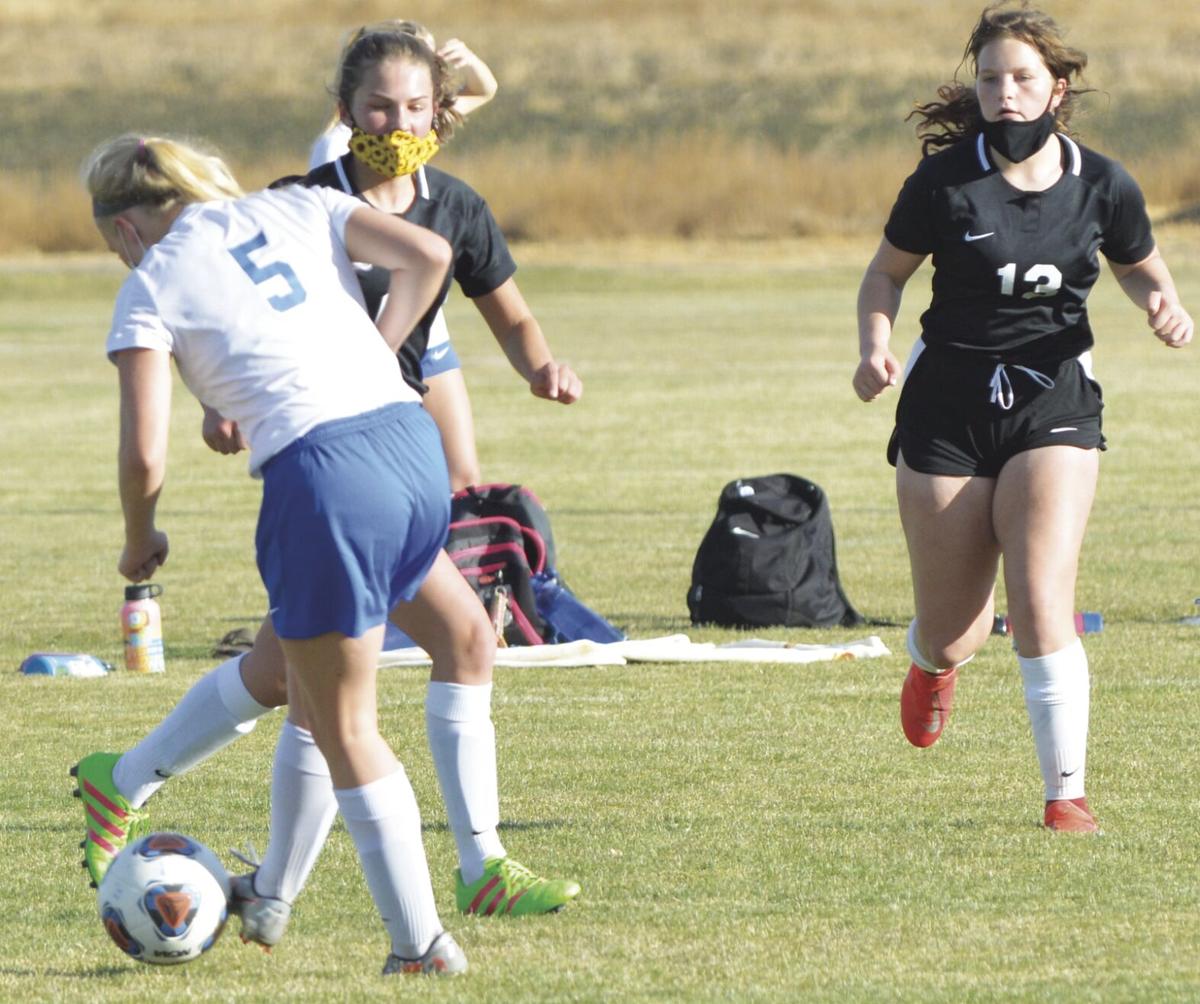 Jozie Livingston, No. 13, at right, competed in both soccer and football at Baker High School as a freshman this fall. Livingston, who is from San Antonio, is living with her grandparents in Baker City. 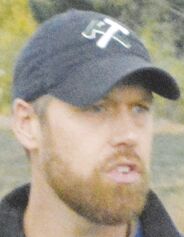 Whether it’s kicking a soccer ball into the net, or kicking a football between the goal posts, Baker High School freshman Jozie Livingston’s schedule is hectic.

And the newcomer to Baker City wouldn’t want it any other way.

“They (sports) are really important, they are a way to relieve stress,” Jozie said. “After a long school day it’s always nice to have something to do.”

Born and raised in San Antonio, Jozie said sports have always been a big part of her life. As she finished middle school and prepared to start high school, she was ready for a new athletic challenge, and she saw that opportunity in Baker City, living with her grandparents, Georgia and Rod Schilz.

“The schools are better, and I like the sports a lot more here,” Jozie said.

Although moving away from her parents, Jeff and Susan Livingston, and her four siblings has been difficult, Jozie, 15, said she has been coping with the homesickness. Fortunately, her dad intends to come visit and talks to everyone over the phone daily.

“It’s been OK, my dad comes to visit every month, and they are all coming for Christmas,” Jozie said.

Her grandparents were happy to bring Jozie into their home to give her this chance.

As soon as she arrived in Baker City this summer, Jozie hit the ground running.

“It was fantastic, everyone was very welcoming and sweet,” Jozie said.

She gravitated first toward soccer, a sport she’s played since she was 3.

Eric Layton, the new varsity girls soccer coach at BHS, was pleased with his new player.

“Very excited for her to be a part of the group, I think she brings a lot of energy,” Layton said.

Getting to know Jozie over the past month in the “mini-session” sanctioned by the Oregon School Activities Association, Layton said she has become a vital part of the Bulldogs squad.

“She brings a bit of culture that we don’t have just in terms of a real dedicated work ethic, she knows what it takes to be successful,” Layton said.

But as excited as Jozie was to join the soccer team, she was clear with Layton from the start that her athletic goals aren’t limited to the soccer pitch.

She also wants to compete as a kicker for the BHS football team.

Both the soccer and football teams were part of the mini-session for traditional fall sports, which ran from Oct. 12 through Nov. 13.

“She told me right away, I was excited for her doing both sports,” Layton said. “In my mind, in this level of high school sports if she can balance the two programs then I am very happy for her to play in both.”

Jozie said she took up football a couple of years ago, and she has grown to love kicking — especially when the game depends on her right foot.

“The responsibility is good, it always helps me to have that pressure on me, I love pressure,” Jozie said. “I think I do better under pressure, I am good at managing the pressure, and getting a good kick out of it.”

With both Layton and Ramos agreeing, Jozie was able to split time with the two teams during the mini-session.

She plans to do the same if the fall sports have a regular season, with practices and games, in 2021. The OSAA has tentatively set the fall sports season for Feb. 22 to May 1.

During the mini-session that ended Nov. 13, Jozie, after a couple of hours of online classes, would meet with her soccer teammates for practice, then leave a few minutes early to catch the last part of football practice.

“If we are kind of busy at the moment, she goes and does her kicking kind of on her own and gets a bunch of reps,” Ramos said. “We tried to work her in as much as we could, early on we put a PAT team together, and kind of did the whole thing for her.”

Although Jozie isn’t the first female to participate in football, Ramos said it’s been gratifying to see how her male teammates have welcomed her to the team.

“It kind of tells you what kind of kids we have in this program, and what the expectation is for how our kids are supposed to act,” Ramos said. “They watched her kick and they are impressed by her ability and understand how that can help us down the road.”

As for balancing a schedule of online classes, along with two sports, Jozie’s grandfather is confident that she can handle the workload.

“Jozie is really good as far as I’m concerned about juggling all that by herself and not taking on more than she can do,” Rod Schilz said.

Jozie said academics come first no matter how much she enjoys competing.

“I keep up with my school work because that’s my first priority,” Jozie said.

Layton, the soccer coach, said he hopes Jozie will continue to become more comfortable with her teammates.

“She has a lot of athletic potential and she is just getting smarter about the game, using space looking for her teammates, looking to pass and make assists because she naturally draws attention to herself because she is such a strong shooter,” Layton said.

As for football, Ramos said Jozie has the potential to compete for the Bulldogs at the varsity level.

“Just from what I’ve seen, she’s certainly going to have an opportunity to do some varsity kicking, just kicking some PATs and potentially some field goals,” Ramos said. “I (would) most certainly consider putting her out there and give her some opportunities to kick some PATs in a varsity football game.”

After her busy fall with soccer and football, Jozie started basketball practice on Monday. The mini-session for traditional winter sports continues through Dec. 18.

Jozies aspires to improve in every sport she plays, and although she wants to focus on soccer with a goal of competing in college, she is thankful for the lessons she learns through sports.

“I think that football and soccer are great ways to get involved with the school, get involved in athletics and get in good shape,” Jozie said.

“In my mind, in this level of high school sports if she can balance the two programs then I am very happy for her to play in both.”