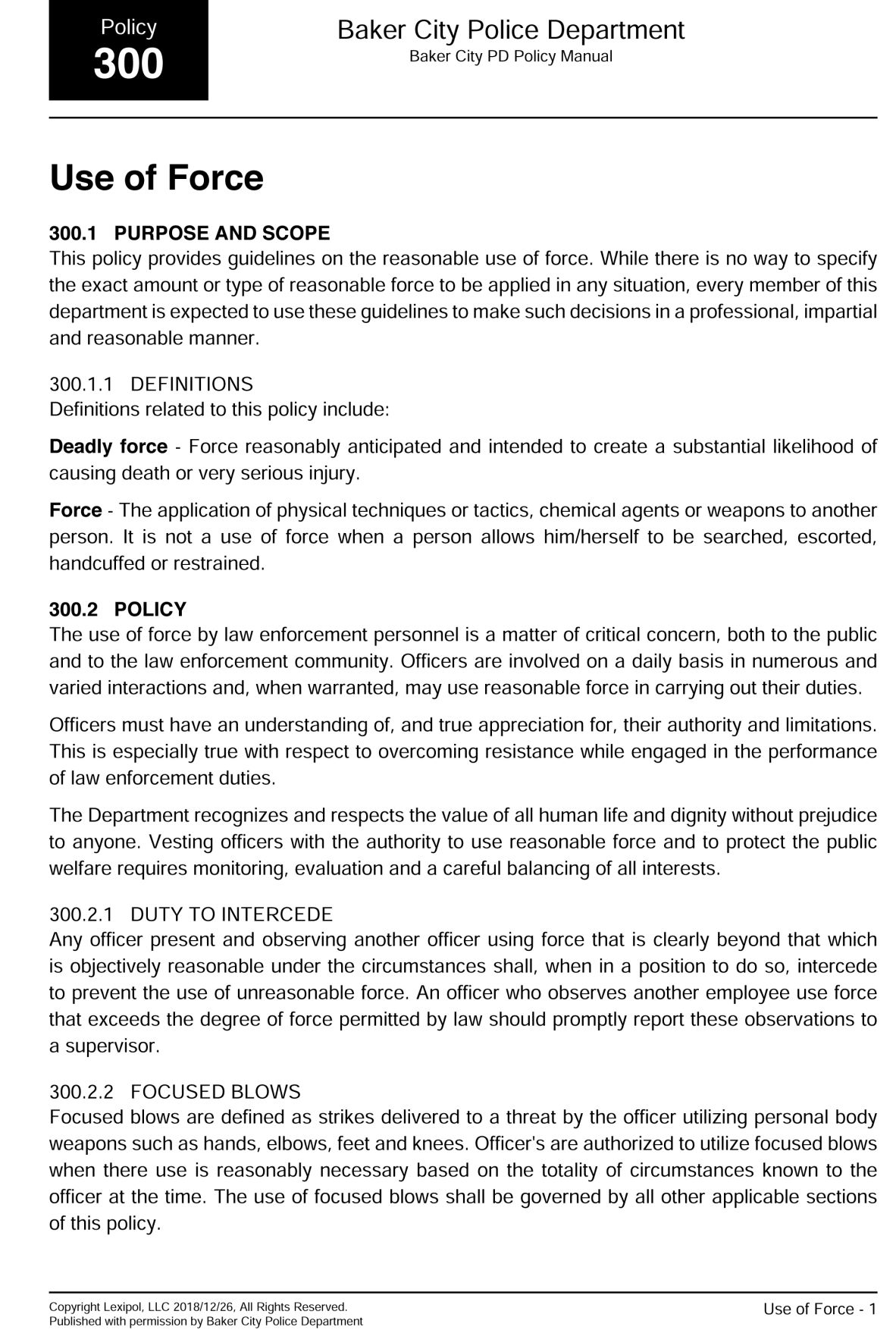 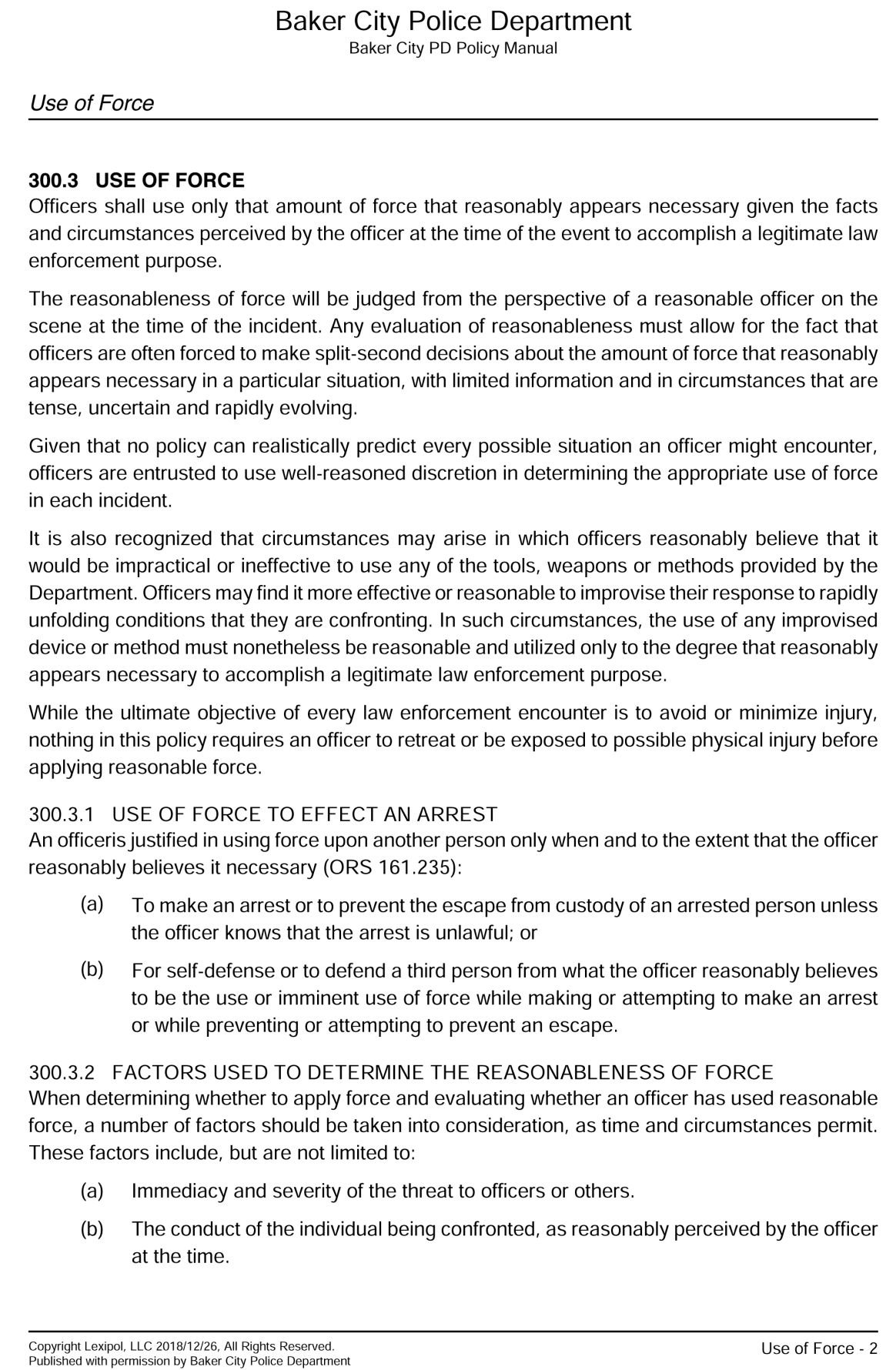 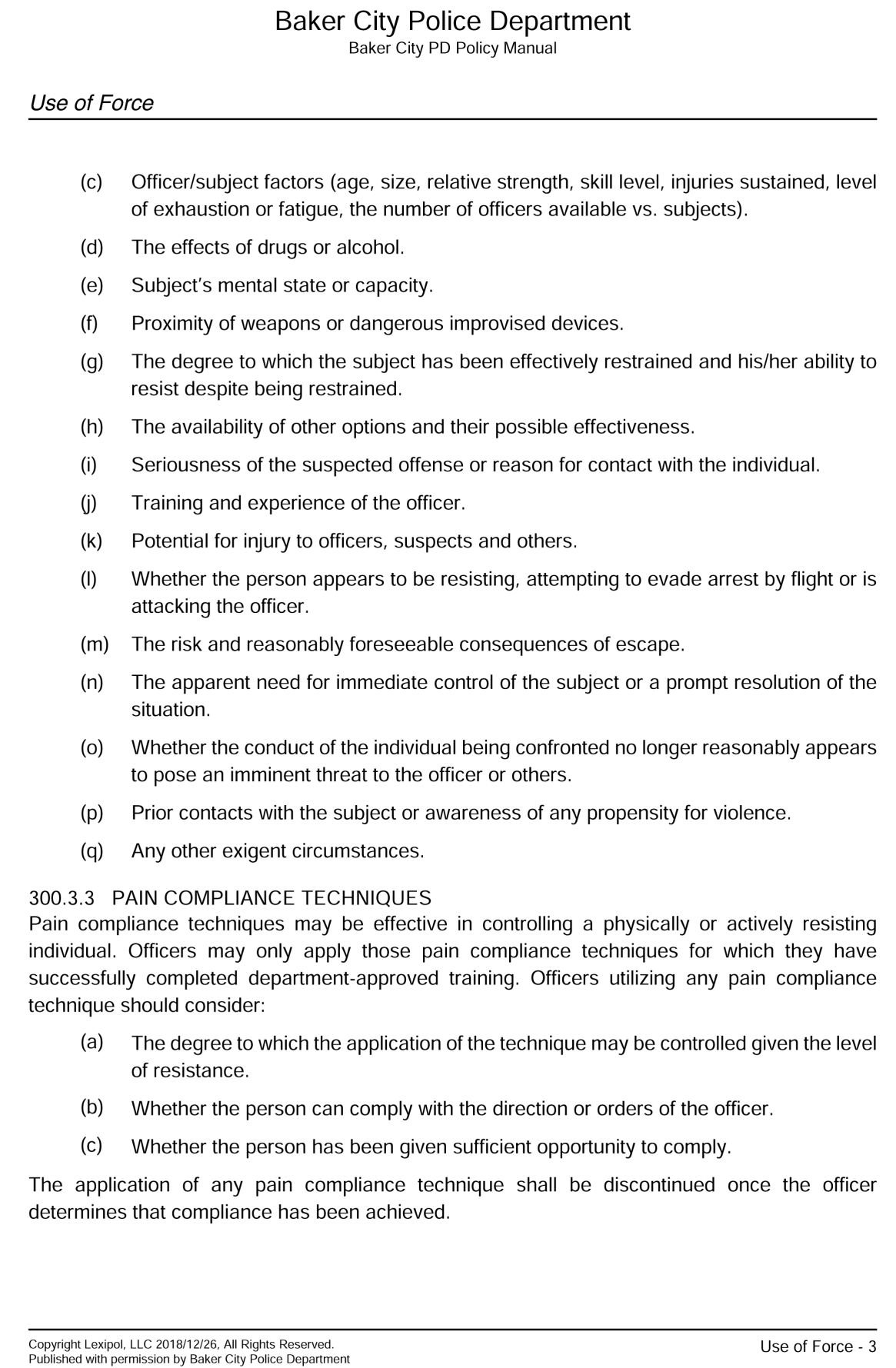 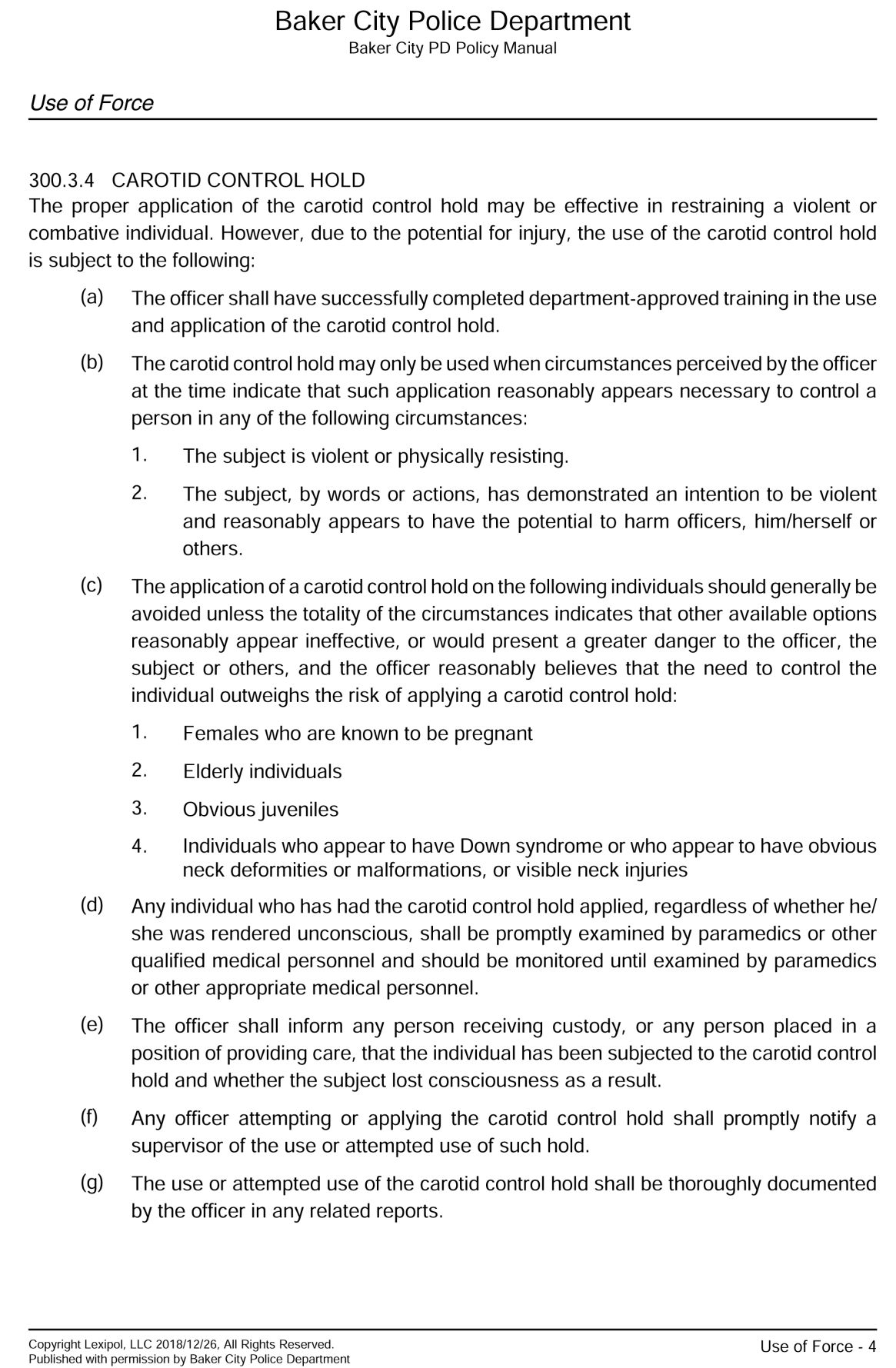 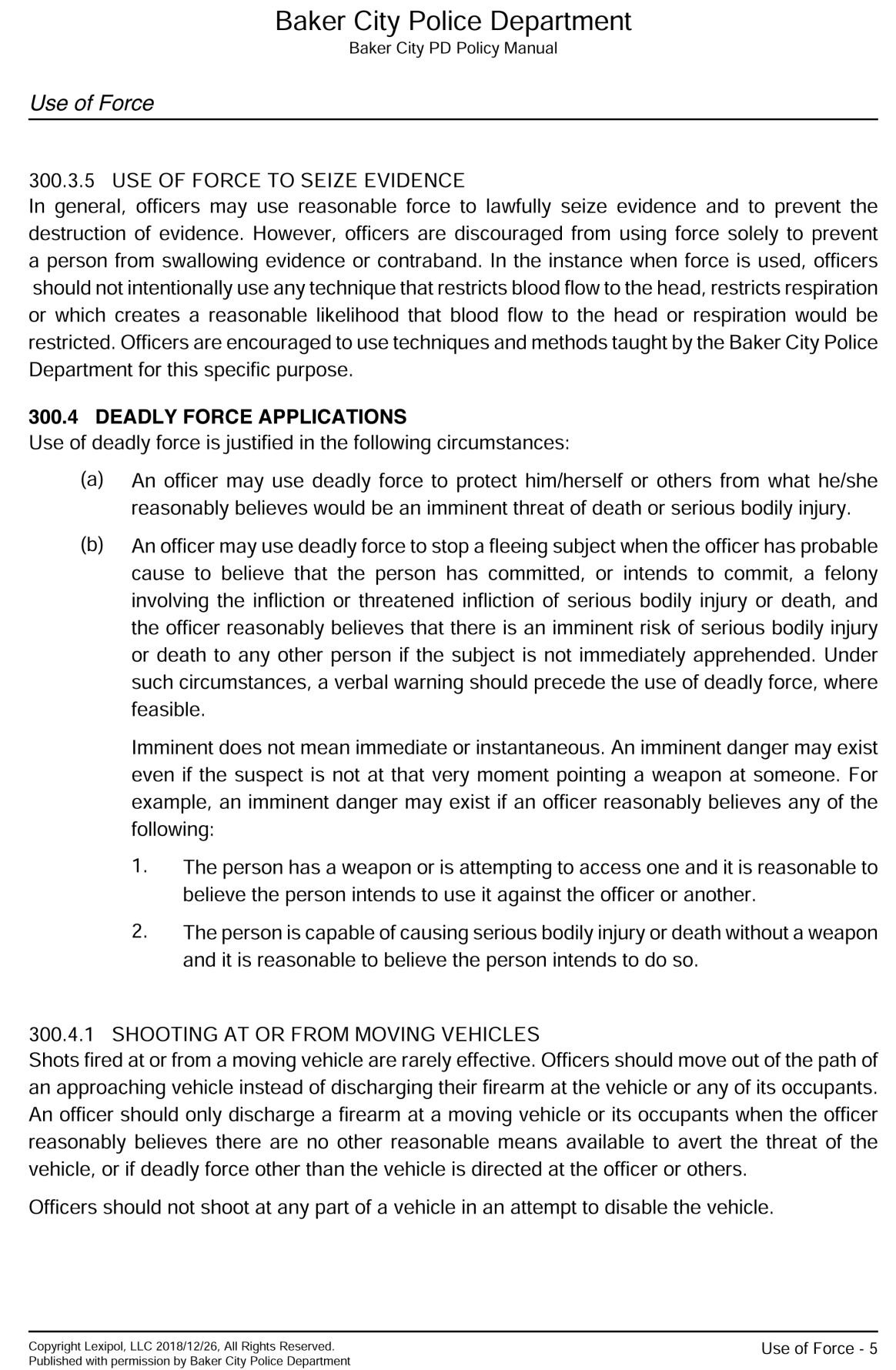 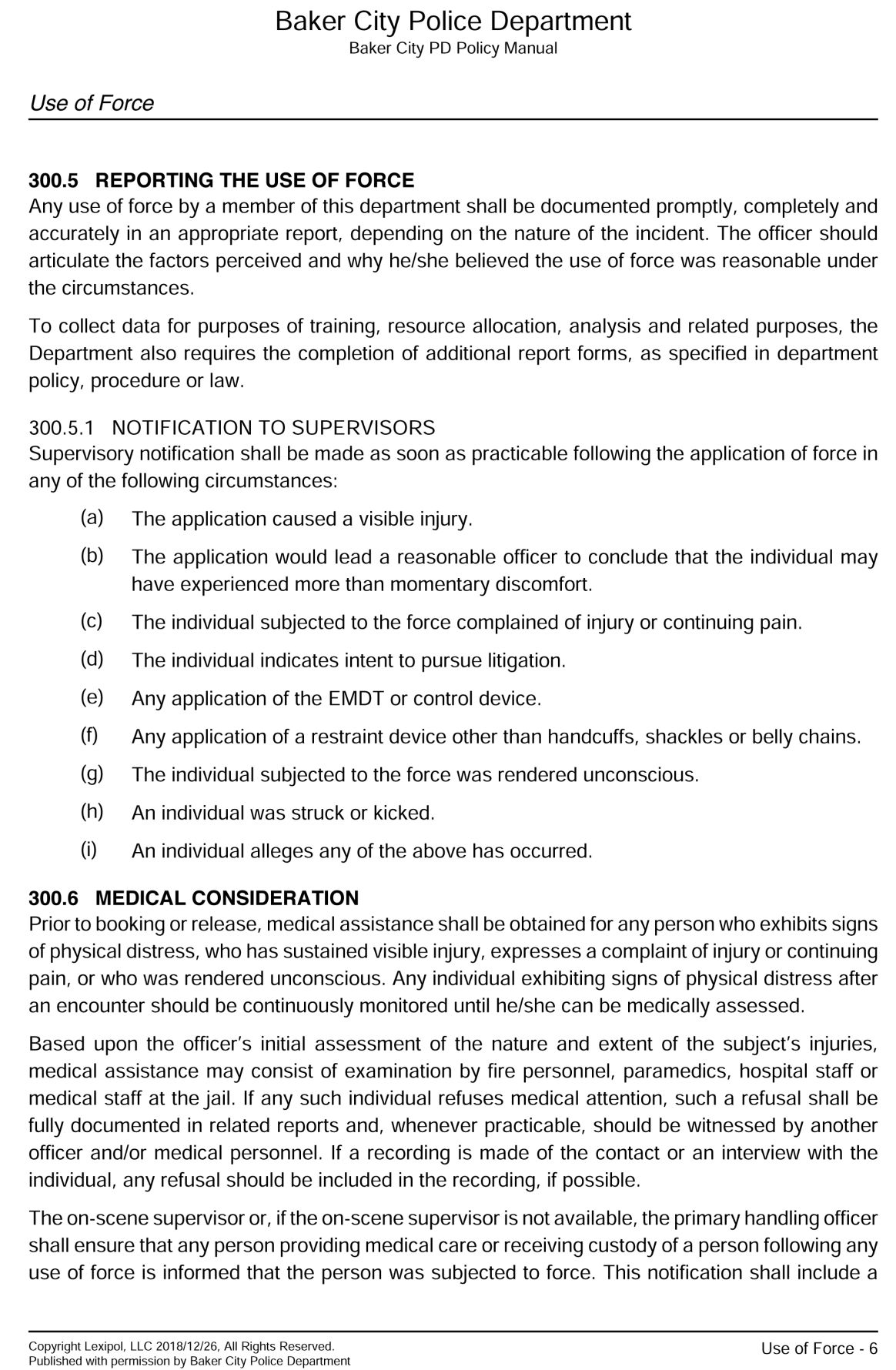 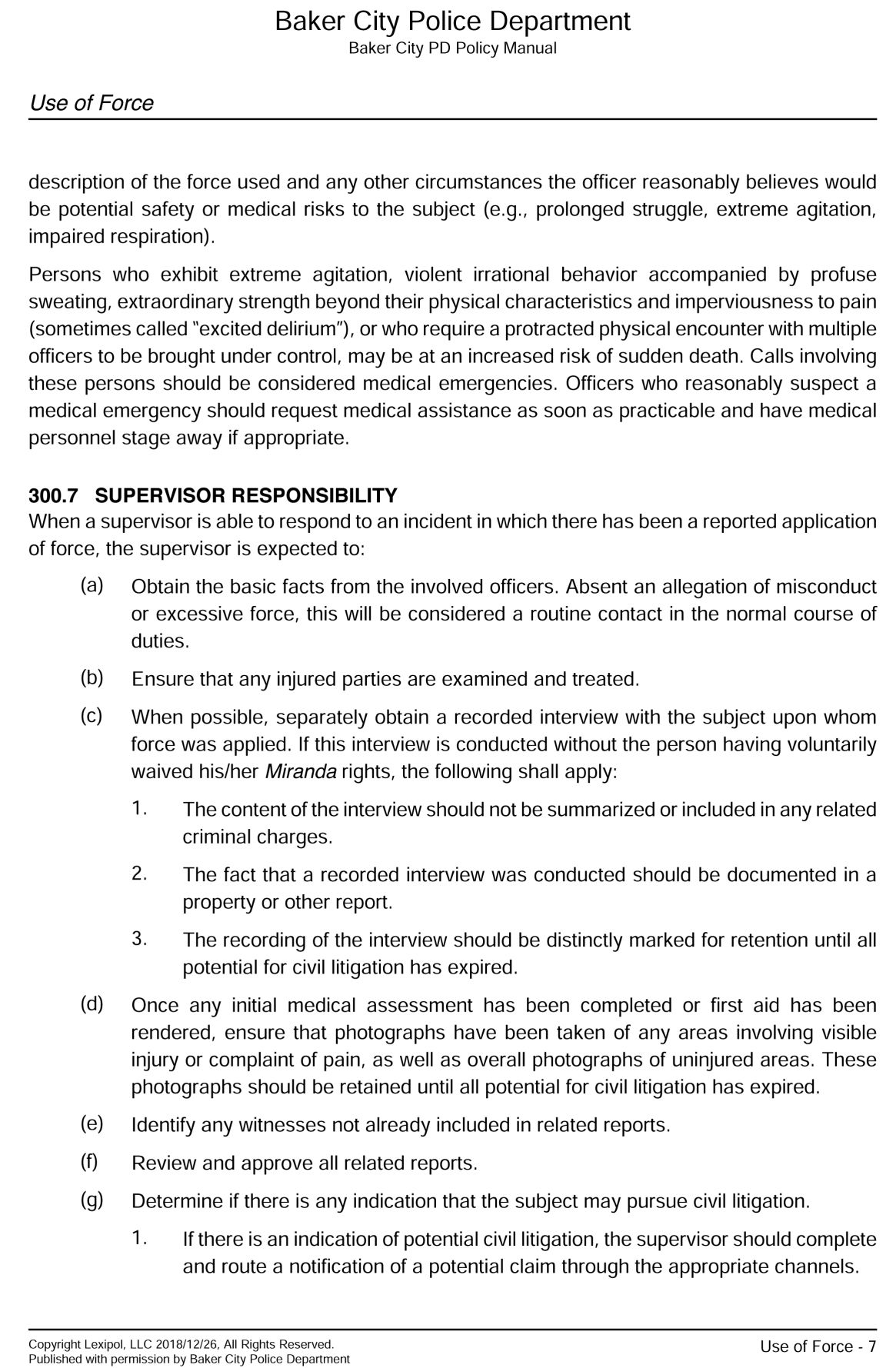 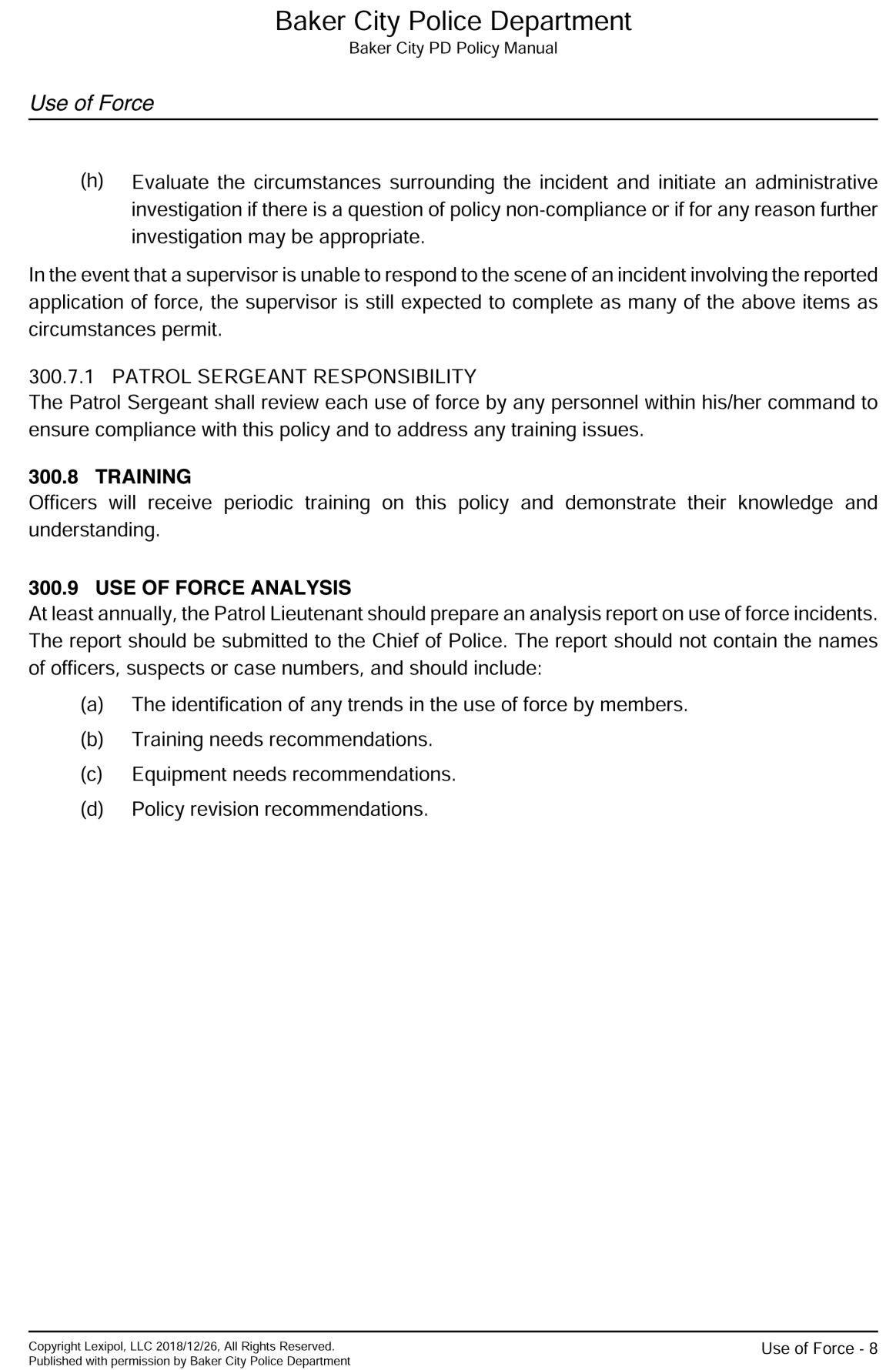 Two of Baker County’s top police officials believe their policies on the use of force largely align with police reform proposals from the protest movement that has spread nationwide over the past two weeks.

Baker City Police Chief Ray Duman and Baker County Sheriff Travis Ash said their use of force policies require, for instance, that any officer who sees another officer using unnecessary force intercede to stop the action, and report the incident to a supervisor.

That’s one of the policies that campaigns such as “8 Can’t Wait” have called for in the wake of George Floyd’s death in Minneapolis on May 25, and that protesters have mentioned in demonstrations in cities across the country.

Derek Chauvin, the Minneapolis police officer who kneeled on Floyd’s neck for more than eight minutes and caused his death, according to autopsy results, has been charged with second-degree murder.

Three other officers who were present during the incident but did not try to stop Chauvin were fired and later charged with aiding and abetting second-degree murder.

Both Duman and Ash said their department’s use of force policy comes from Lexipol, a California company that writes policies for police departments to adopt.

Duman said the Minneapolis incident, and other situations in which suspects died while police were using force during an arrest, “are very problematic to law enforcement.”

Duman worked for the Oregon State Police for more than 27 years, retired from that agency in 2011 and took over as Baker City Police chief in 2019.

He said the publicity over those deadly incidents has prompted what he considers a welcome, and necessary, review of police procedures.

“We need to stand up and take a look at what’s going on,” Duman said. “Otherwise it’s just going to continue.”

Duman said he’s been reviewing the Baker City Police’s use of force reports over the past five years to see if there are any trends that suggest a potential problem.

Duman hasn’t finished his review but he said he has no reason to believe the department’s officers have not been complying with the use of force policy.

So far in 2020 there have been six use of force incidents and 235 total cases.

Ash has worked in law enforcement since 1998, joined the Baker County Sheriff’s Office in 2005 and has been sheriff since 2015.

He said that although the use of force policy is crucial — all deputies are required to read and to sign it, he said — it is also only a guideline, and deputies must also use their discretion, and what he calls their “moral compass,” when dealing with the public.

“It comes down to integrity,” Ash said. “I hold myself to the highest standards of professional conduct, and I set that bar very high for myself and for my deputies. It comes back to doing what’s right.”

The Baker City Police and Baker County Sheriff’s Office use of force policies don’t completely comply with all the recommendations from campaigns such as “8 Can’t Wait.”

For instance, that campaign urges all police agencies to ban holds that cut off a suspect’s air supply or the blood flow through the carotid artery.

The city’s and county’s 8-page use of force policies, which are essentially identical, devote a full page to guidelines for a “carotic control hold.”

The policy states that only officers who have been trained in the hold can use it, and only in cases when the subject is “violent or physically resisting” or, by words or actions, “has demonstrated an intention to be violent and reasonably appears to have the potential to harm officers, him/herself or others.”

The policy states that officers should avoid using the carotid control hold on females known to be pregnant, the elderly, juveniles or people who appear to have Down syndrome, neck deformities or visible neck injuries.

The policy also requires that any time an officer employs the hold, the suspect be promptly examined by a paramedic.

Ash said the carotid control hold is still part of the Sheriff’s Office policy only because some deputies have been trained in its use.

Ash said he has never seen the technique employed during his career, and it is no longer taught at the Sheriff’s Office.

Duman said his concern about banning certain types of force is that doing so can potentially put a police officer at a disadvantage during an altercation with a suspect. When officers are prohibited from using a technique intended to be nonlethal, Duman said, there’s a chance that the officer, fearing for his or her life, would have to shoot a suspect instead.

“You have to give officers the flexibility and the decision-making responsibility,” Duman said.

Ash said his philosophy is summed up by the motto painted on the doors of Sheriff’s Office vehicles: “Conservators of the peace.”

“It’s our job to keep the peace,” he said. “I feel really comfortable with how the Sheriff’s Office is doing business in our community.”