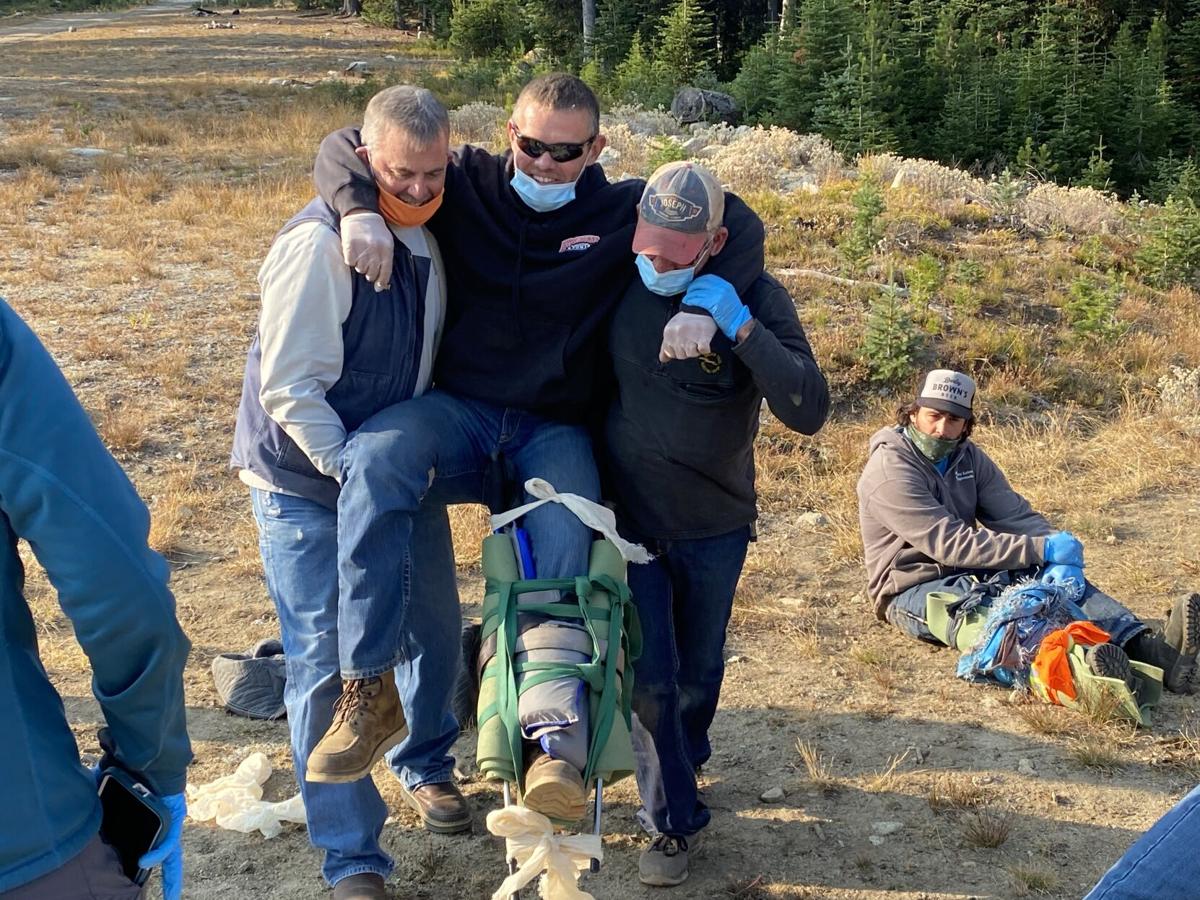 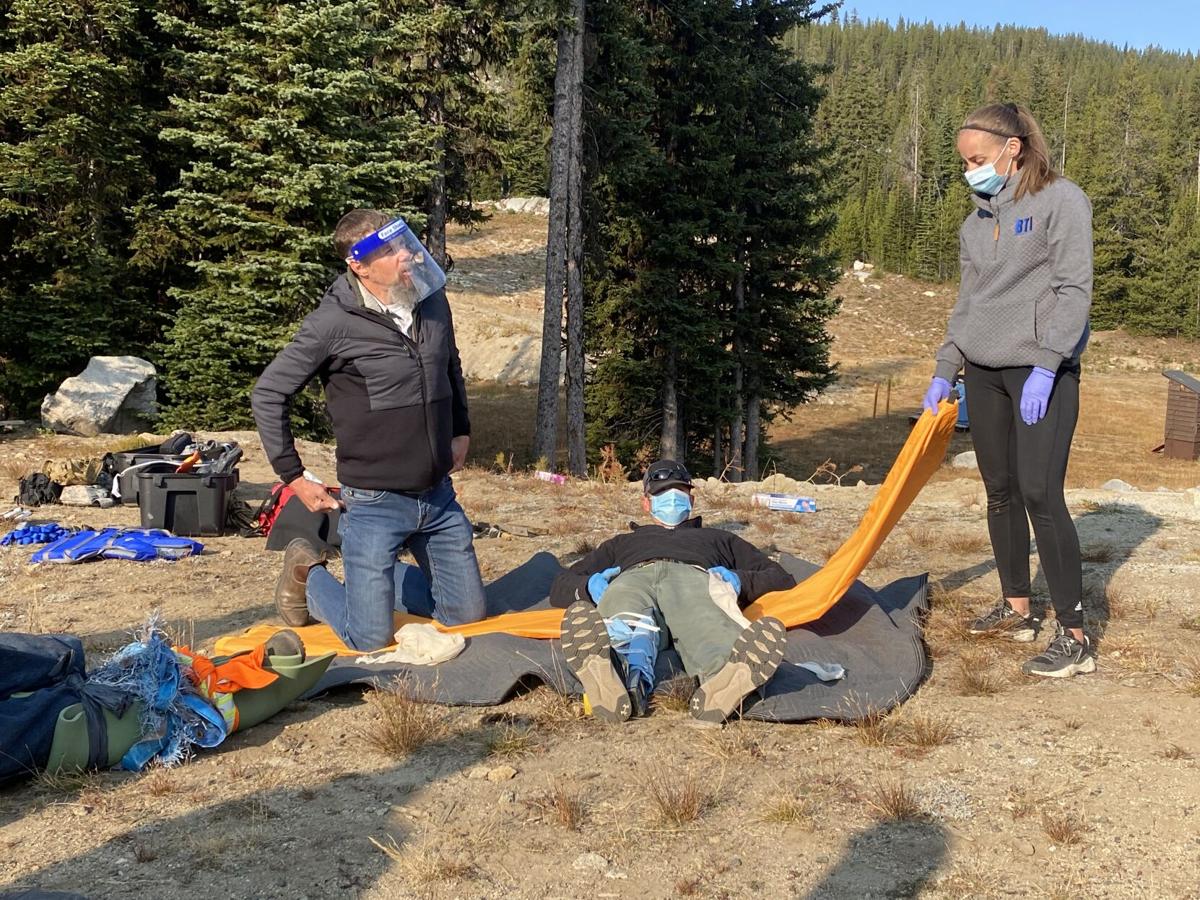 Dr. Kaare Tingelstad, left, and Robbie Langrell, right, demonstrate the method for splinting a fractured pelvis. Their "patient" during a training on Tuesday, Oct. 4 at Anthony Lakes Mountain Resort is Travis Smart, a lineman for Oregon Trail Electric Cooperative in La Grande. 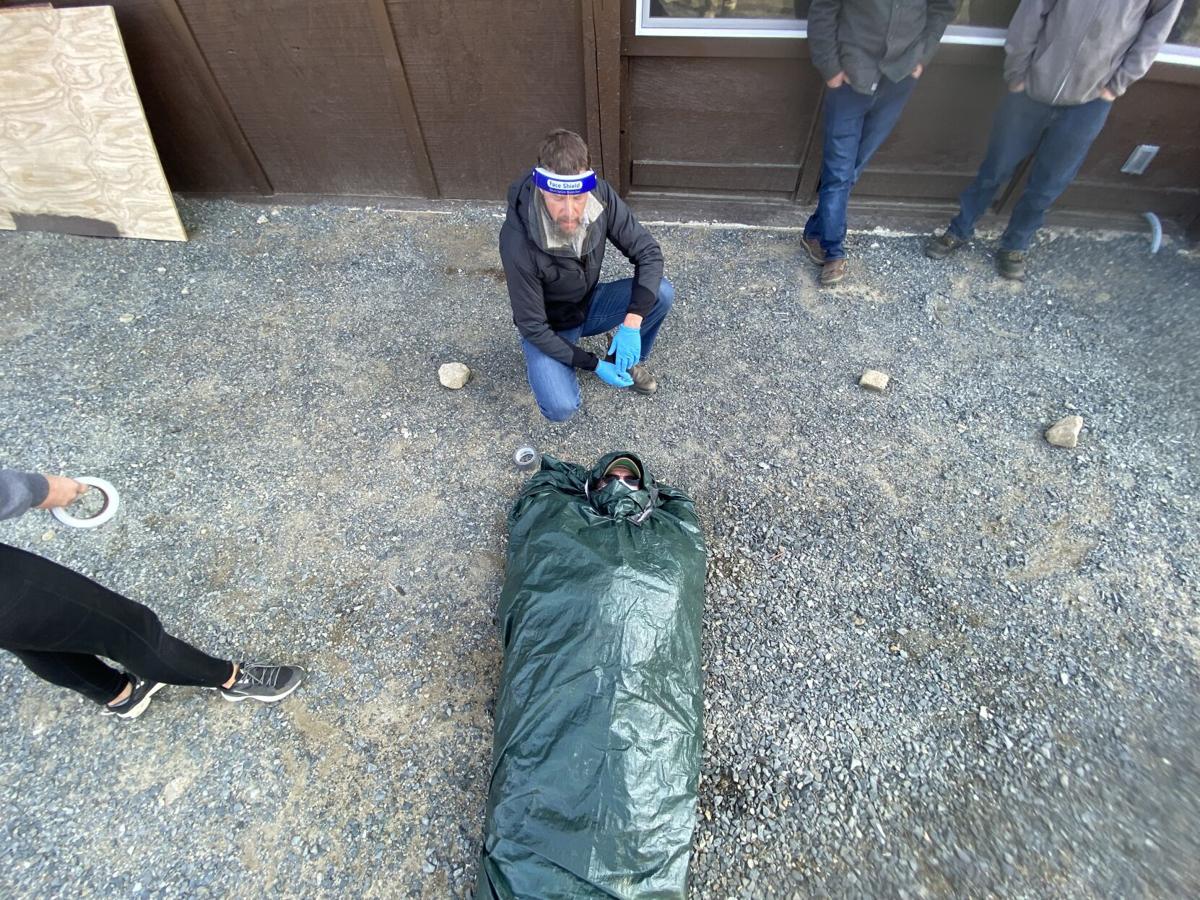 Dr. Kaare Tingelstad, top, demonstrates the proper way to wrap a severely hypothermic person for transport to a hospital. The "victim" in this case is Al Dockweiler, an Oregon Trail Electric Cooperative journeyman lineman.

Dr. Kaare Tingelstad, left, and Robbie Langrell, right, demonstrate the method for splinting a fractured pelvis. Their "patient" during a training on Tuesday, Oct. 4 at Anthony Lakes Mountain Resort is Travis Smart, a lineman for Oregon Trail Electric Cooperative in La Grande.

Dr. Kaare Tingelstad, top, demonstrates the proper way to wrap a severely hypothermic person for transport to a hospital. The "victim" in this case is Al Dockweiler, an Oregon Trail Electric Cooperative journeyman lineman.

Dr. Kaare Tingelstad is looking for someone with a fractured pelvis.

Travis Smart springs to his feet with an agility not generally associated with pelvic fractures.

He also has a splint on his lower right leg but this seems not to impede him either.

Smart lies on his back, reclining on a blanket spread across the granitic sand near Anthony Lakes Mountain Resort’s lodge.

Tingelstad and Robbie Langrell each grab one end of a bright orange swath of nylon which is rolled into a makeshift rope.

Then they start a curious routine, rather like a square dance, circling Smart as he lies still, the nylon pulling tight against his hips.

“Is that pretty tight?” Tingelstad asks the supine Smart.

“What do we do with him now?” Tingelstad asks the 10 or so people who stand in a rough circle, watching as Smart is trussed up.

The correct answer is what you don’t do with someone whose pelvis is broken — which is move him.

“He stays there, as comfortable and warm as you can make him,” Tingelstad says.

Smart, whose sense of humor, unlike his pelvis, has not been constricted, chimes in.

“Hand me a beer and go get the helicopter,” he says.

Laughter spreads through the thin alpine air on this sunny, but a bit blustery, early October morning.

This is serious business, to be sure.

But it’s not an emergency.

So is his right leg.

The purpose of this gathering on Tuesday, Oct. 5 isn’t to save someone’s life — or even their pelvis.

The goal is to learn.

The students are linemen from Oregon Trail Electric Cooperative in Baker and Union counties, as well as two Anthony Lakes employees.

Tuesday was the second day of a two-day session where Tingelstad and Langrell taught the workers how to deal with a variety of potentially life-threatening situations, including injuries and hypothermia.

The topics are relevant for OTEC employees, because their jobs require that they often work in remote and rugged terrain, said Joseph Hathaway, OTEC’s communications manager.

“It’s just good basic knowledge to have when you live in Eastern Oregon,” Hathaway said. “We have so many miles of lines in forested areas. This training is pretty integral to our safety mission.”

Although the Occupational Safety and Health Administration requires OTEC workers to have basic training in first aid, the course that Tingelstad and Langrell put on through the Baker Technical Institute (BTI) is more thorough, said Maaike Schotborgh, OTEC’s safety and loss control manager.

The scenarios that Tingelstad and Langrell demonstrated — such as stabilizing fractures and safely transporting injured people — are applicable to the types of situations that OTEC workers could potentially have to deal with, Schotborgh said.

“These guys are by themselves or working in groups of two or three,” she said. “They rarely are out of cell service or radio coverage, but they are often an hour or more from emergency services.”

This week’s training is part of the partnership between OTEC and BTI that was announced in July.

The organizations are working to start a utility training center in Baker City that would offer a variety of courses for people who work for electrical companies or other utilities, Hathaway said.

The goal, he said, is to have the center attract workers from utilities throughout the Northwest.

Although this week’s training was mainly for linemen, Hathaway said eventually the skills will be made available to all OTEC employees.

The two-day course featured a mixture of classroom instruction and hands-on training such as Tingelstad and Langrell’s demonstration of stabilizing a patient with a broken pelvis. They used the types of materials that OTEC workers carry routinely in their trucks.

Tingelstad told the students that in the case of, say, a leg injury, the patient can be safely taken to a waiting ambulance.

But the situation is quite different, Tingelstad said, with a pelvic fracture.

The reason, he said, is that a person with a broken pelvis might also have a spinal injury that makes it more dangerous, not less, to move the patient.

In that situation, Tingelstad said, the proper procedure, once the fracture is immobilized, is to summon help, whether a crew to put the patient on a backboard to be carried out, or a helicopter if that’s possible.

Fending off the chill

Once Smart was extricated from his pelvic splint, the group returned to the Anthony Lakes lodge to learn about the dangers of getting too cold.

Langrell, who grew up in Baker City but also has lived in Alaska and is trained in wilderness survival, gave a PowerPoint presentation about hypothermia.

She pointed out that although humans have a fairly effective means of cooling themselves — sweating — we are much less capable of keeping ourselves warm.

When a person shivers, that’s the body’s main way, through stimulating muscle fibers to contract rapidly, to generate heat.

“Shivering is your metabolic engine revving up to redline,” Tingelstad said.

A person who is shivering, uncoordinated and confused likely is suffering from mild hypothermia, Langrell said.

The much more dangerous situation is severe hypothermia, when a person stops shivering and thus is no longer capable of warming himself without help.

Langrell said it can actually hurt a severely hypothermic person by warming him too quickly.

Rubbing the person’s hands, for instance, can cause chilled blood to rush from the extremities to the heart, potentially causing a heart attack, she said.

The key, Tingelstad said, is to recognize the early stages of hypothermia, since that’s when it’s still possible for a person, or a friend or co-worker, to reverse the process.

Tailoring his lesson to his audience, Tingelstad said one of the simplest steps could be to simply “get out of the bucket,” meaning the elevated perches that lineman use to access power lines.

He said he always carries gummy bear candies, a source of sugar that, using the analogy of starting a campfire, is equivalent to the kindling.

(Proteins and complex carbohydrates are akin to sticks that you feed into a small fire, Langrell said, and fats are the logs that sustain the blaze.)

Tingelstad asked the OTEC workers if they had ever been cold on the job.

There were several chuckles, and every head nodded.

Chris Peppers, a lineman in Baker County, recounted a winter day, not far from Anthony Lakes, when he and a crew were called out to restore power to the ski area.

Although it was sunny and relatively warm at the start, the weather eventually turned cold and snowy. And Peppers said he got sweaty while working to free the crew’s side-by-side from deep snow.

He said that although he knew it was dangerous to be both damp and cold, he was so anxious to get the power restored that he never stopped to build a fire.

Tingelstad said the crucial period is when hypothermia is mild — when it’s still possible for a person to get warm on his own.

“You can fix this on the job site,” he said.

But once hypothermia worsens to the point the person no longer is shivering, reversing the process is impossible in the field, and trying to do so will imperil the patient even more.

“You can keep them from getting colder, but you can’t save a severely hypothermic patient in the field,” Tingelstad said.

The lifesaving procedure must happen in a hospital, he said, describing the process — inserting a needle in one femoral artery to draw out the chilled blood, warming it in a machine, and then replacing it via another needle in the other femoral artery.

He said he never ventures into potentially hypothermic conditions without wearing wool — especially merino wool — which insulates well, even when it’s wet.

“Cotton does kill,” he said.