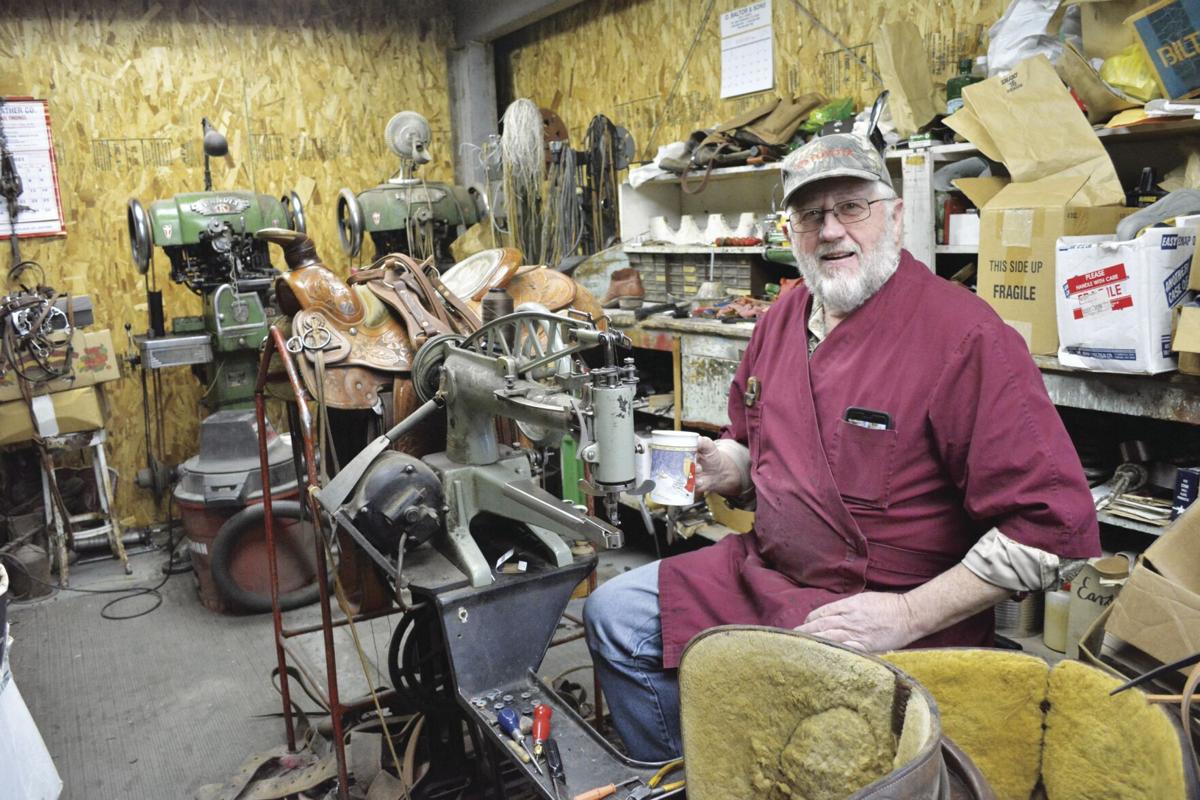 Gary Johansen is looking forward to traveling after he retires on Jan. 28. 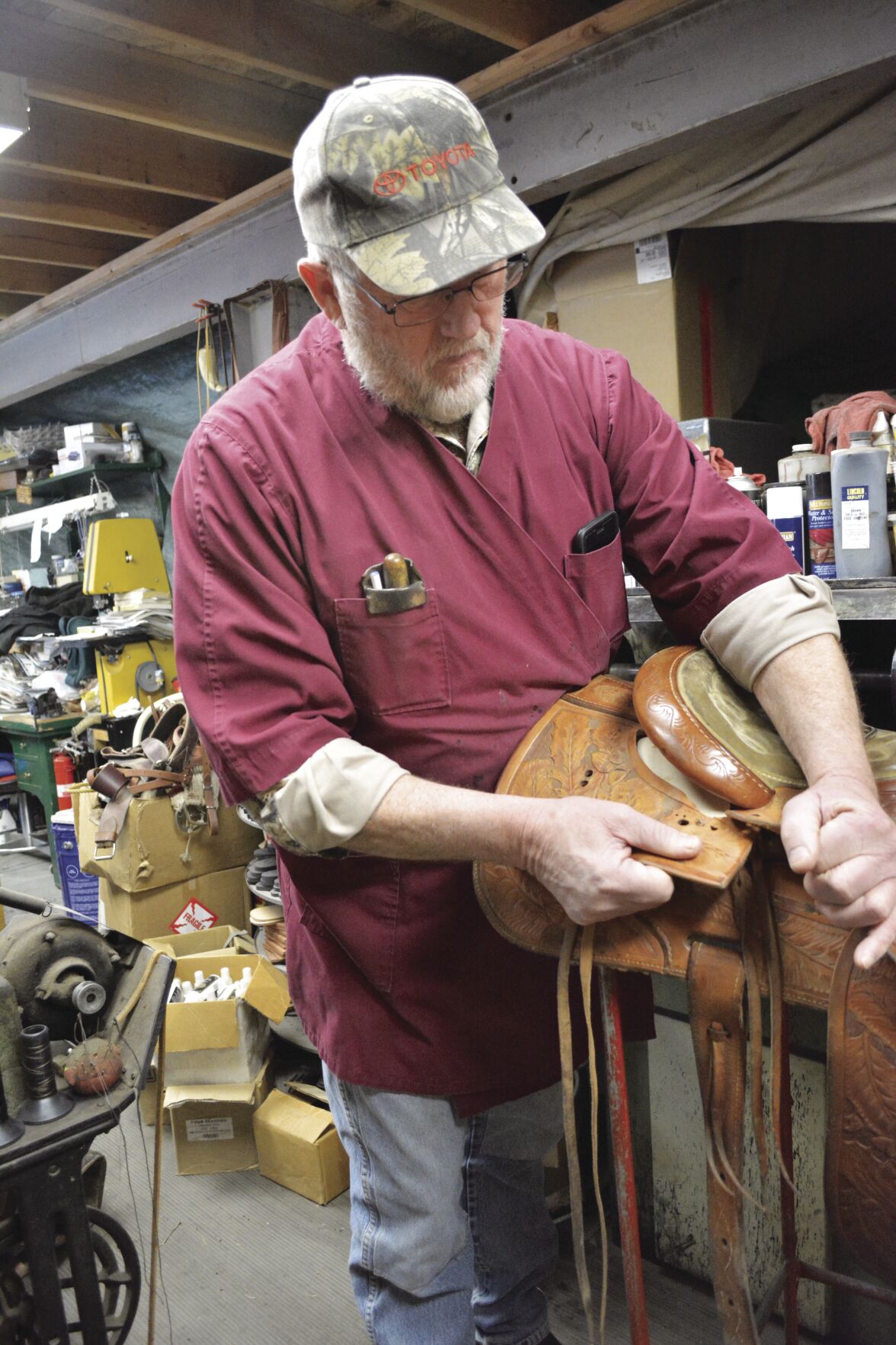 Gary Johansen has been repairing shoes and boots, as well as saddles, for more than 30 years. 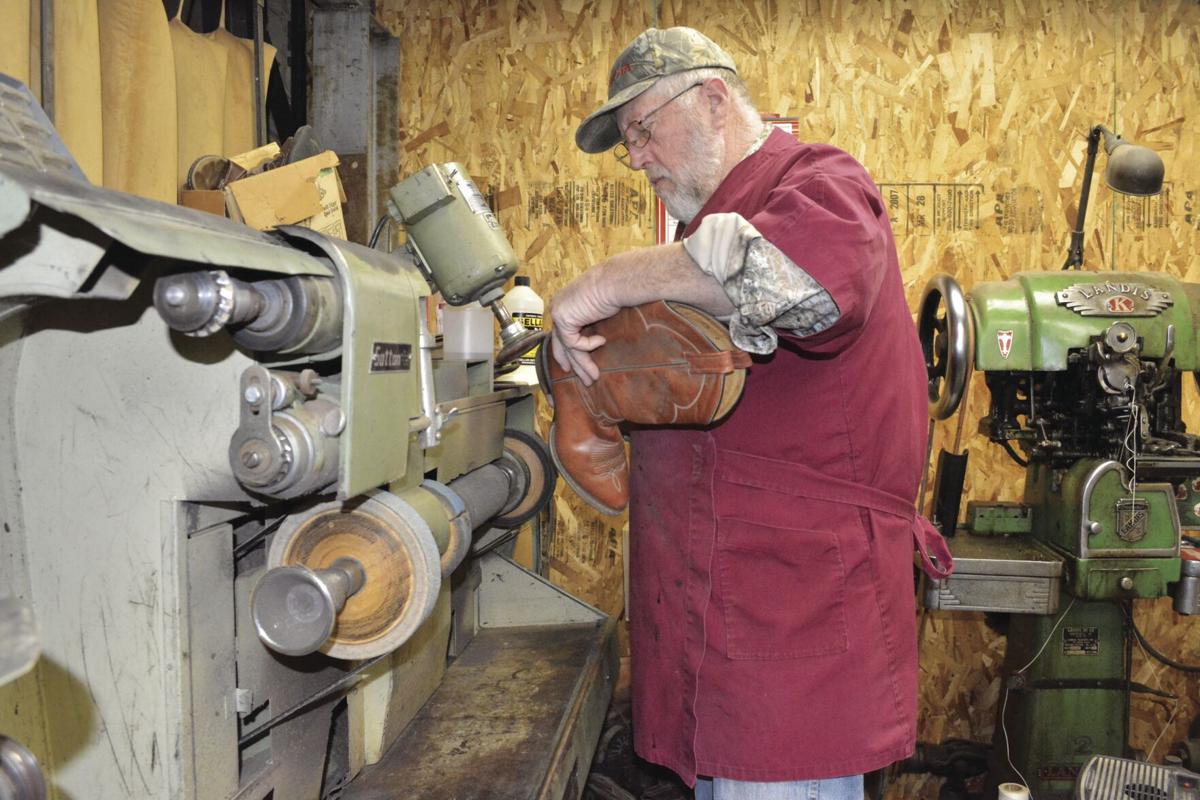 Gary Johansen works on a cowboy boot in his Baker City shop. 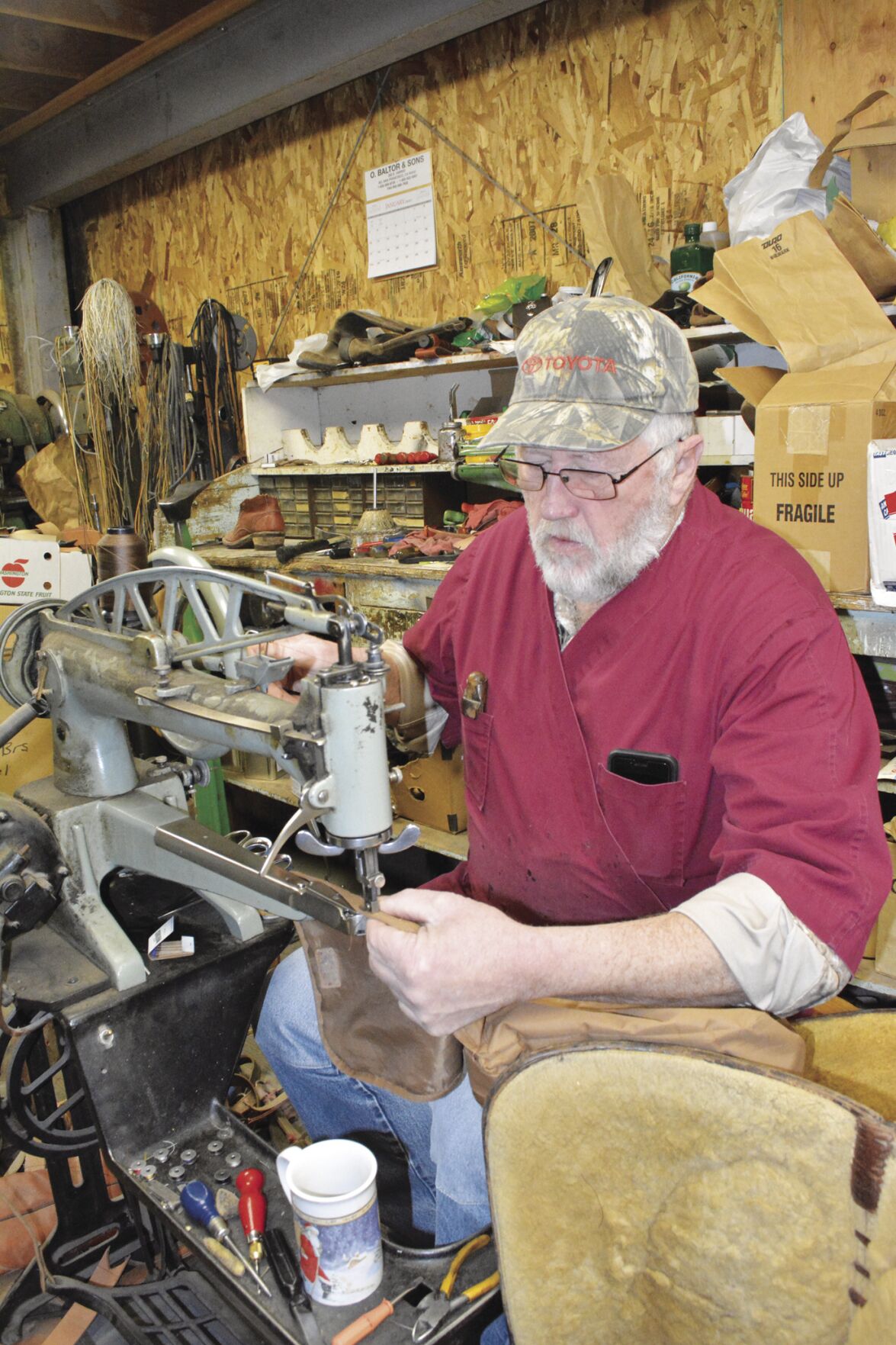 Gary Johansen is looking forward to traveling after he retires on Jan. 28.

Gary Johansen works on a cowboy boot in his Baker City shop.

That’s the day the 69-year-old Baker City resident will officially retire from the boot and shoe repair work he was trained for more than 30 years ago.

On that day he’ll officially lock the door to the Elkhorn Boot and Shoe Repair shop for the last time.

And he and his wife, Cindy, will be setting their sights on some new adventures.

“I’m in here till the 28th and then it’s history,” he’s been busy telling his customers.

Cindy, 66, who has served as the shop’s bookkeeper, retired last summer after a 31-year career with the Baker School District, most recently as secretary at South Baker Intermediate School.

“He couldn’t make up his mind if he wanted to retire or not, but after watching me enjoying my retirement he decided to join me,” Cindy said.

“I like sitting in there drinking coffee,” he says, pointing to his home just in front of the shop at 10th and Place streets.

And then he and Cindy, who’ve been married for 47 years, plan to do some traveling, depending on the pandemic.

While he admits that he’ll probably be in the shop “once in a while,” he’s eager to hit the road.

The Johansens hope to head for the Black Hills of South Dakota to visit Mount Rushmore and then tour Jackson Hole, Wyoming, and the Tetons.

And Gary, a mule and horse wrangler, says he’s always wanted to ride a mule to the bottom of the Grand Canyon. Cindy will take up a good book while he enjoys the trip, he says.

Gary will occupy himself during retirement with more hunting and fishing as well.

The Johansen family moved to Northeast Oregon from the Sherwood area when their three children were young. Their oldest, Corey, will be 46 in February; their daughter, Kelly Stephens, is 43; and their son, Marty, is 40. They also have nine grandkids.

Gary says he left a job working in construction to move to Eastern Oregon, where he’d always wanted to live, after drugs starting showing up at the elementary school when his oldest son was a third-grader.

The family moved to Enterprise and Gary did ranch work in the area for a while before taking a job at the sawmill in Joseph. He was forced to look for a different line of work after injuring his back.

A vocational rehabilitation counselor helped place Johansen in training with George Ziermann, who owned Hells Canyon Shoe Manufacturing in Baker City at the time. The 82-year-old Ziermann now lives in Prineville and continues to work on shoes and boots.

The Johansens moved to Baker City in 1986 and Gary and Cindy joined the community through leadership roles at First Lutheran Church and as volunteers with the Boy Scout program among other endeavors. Cindy was a leader of the Cub Scout summer camp for 24 years.

Johansen’s rehabilitation training hit a couple of snags in the beginning. He says he was drawn to working with leather and had first started learning to be a saddle maker at a shop in Island City.

When that plan didn’t work out, he moved to shoe manufacturing and repair under Ziermann’s instruction.

That plan was nearly upended as well when Johansen developed carpal tunnel syndrome after working with Ziermann for a couple years.

That put him back to training for other employment for a short time during which he supervised prison work crews for the Bureau of Land Management.

But Johansen was drawn back to the boot and shoe repair business where he became popular with customers for his desire to work meticulously to meet their requirements and deadlines. His skills brought a steady stream of orders to satisfy his desire to get back to work after his injuries and subsequent surgeries. The carpal tunnel injury, however, forced him to focus more on the repair side of the profession rather than the manufacturing.

Cindy, who says she’s always worked behind the scenes in her role with the shop, speaks proudly of her husband’s reputation in the community and throughout the country.

“Gary is a gifted perfectionist at his craft and it shows in the work he puts out,” she said. “He stands behind his word and his work.”

Johansen said he’s always had an artistic bent, drawing animals even as a young child. Other things took precedent as time passed, but he has been able to express himself through the artistry of repairing shoes (and boots, saddles, bags and other goods) at Elkhorn Boot and Shoe Repair.

His shop is filled with tools of the trade. A Singer sewing machine that he estimates is 80 years old and other machines that cut to precision, polish, brush and trim are housed inside. He has accumulated the tools over the years, along with boot and shoe polish, heels, half soles, leather pieces — and all other shoe and boot repair supplies imaginable — that might be needed to complete the work that comes his way.

The Johansens purchased the repair shop in March of 1992 from Kenny and Minnie Errend. It had been housed in the back of the Errends’ former Elkhorn Western Wear store at 1812 Main Street (the present site of Baker Gold & Silver).

Gary has reduced his work week to Tuesdays, Wednesdays and Thursdays over the past few years and now, he says, “I’m just done.”

Although he has remained open throughout the pandemic, he says his business suffered losses because of the governor’s shutdown orders, which he admits has had some bearing on his decision to retire.

“Business was down several thousand this year. For weeks I didn’t see one pair of shoes — and I was open,” he said.

Though there is still a call for the service he has provided for 29 years, it’s not nearly as steady as it had been in the past, he says.

He recalls when logging trucks parked outside his First Street shop as drivers packed in their cork boots for repair or to place special orders.

“Corks today you just don’t see,” he says. “I used to rebuild and make corks.”

In the days before the mill closed, his customers regularly included timber fallers and mill workers bringing in their heavy work boots for repairs.

The quality of shoes and boots has declined over the years as shoe manufacturing has moved to China where products are designed to be thrown away rather than repaired, Johansen says.

Fashion trends also have had an impact on the jobs he’s called on to complete. In the past he recalls dying leather shoes to match women’s dresses. And women’s fashions required a different pair of high heels — which were always in need of repair — for every ensemble.

He recalls a former customer who lived out in the valley and traveled to town every Wednesday. She always brought him high heels to repair from her collection of 80 pairs.

Young people who used to bring in their roper cowboy lace-up and slip-on boots have since changed their style to tennis shoes, he says.

Still, Johansen’s reputation for quality work has brought him business from all over the country, including Tennessee, Texas and Alaska.

And he has numerous returning customers among the railroad workers, cowboys, ranchers and welders closer to home.

Thinking of some of his more challenging jobs, Johansen’s mind turns to shoes and boots that have been torn apart by dogs.

Johansen says he feels pride in knowing he can restore the mangled footwear: “Knowing I can fix it, getting it done and showing people what can be put back to life again.”

His friend and customer, Paul Omann, spoke highly of Johansen’s abilities during a Tuesday morning stop at the shop to visit and share a cup of coffee.

And Johansen’s son, Marty, who also stopped by for a morning visit, marvels at his father’s skills.

“I’ve seen other people’s work, and I guarantee you, you won’t find anyone who does better work than he does,” Marty says.

Following in his father’s footsteps in the profession wasn’t an option he’d ever considered, however.

“I don’t have the finesse or the patience he does,” Marty said. “I’ve always been good at destroying stuff. That’s why I fall trees.

“To do what he does takes a lot of patience,” he said.