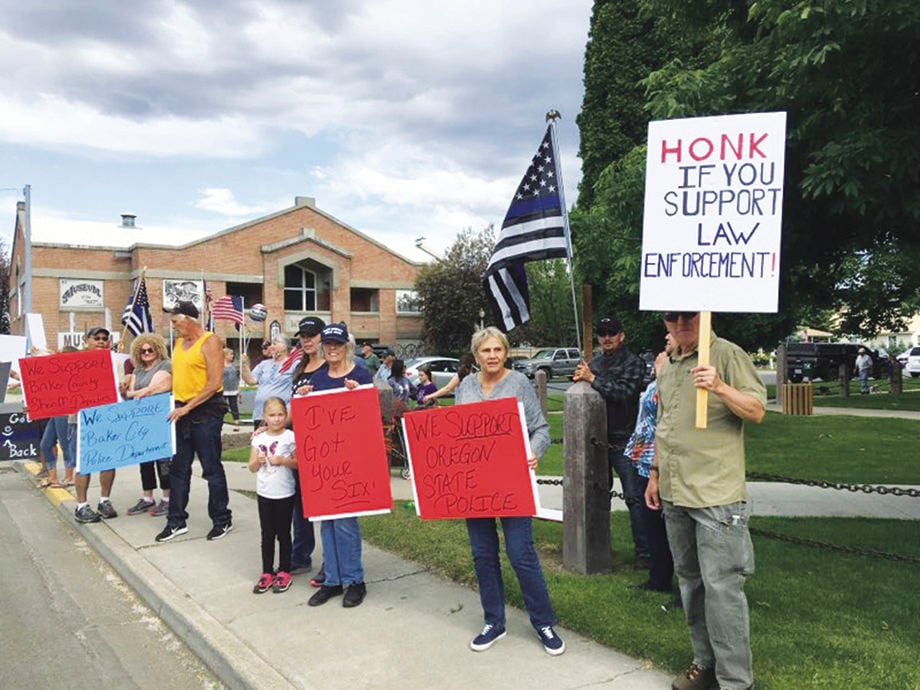 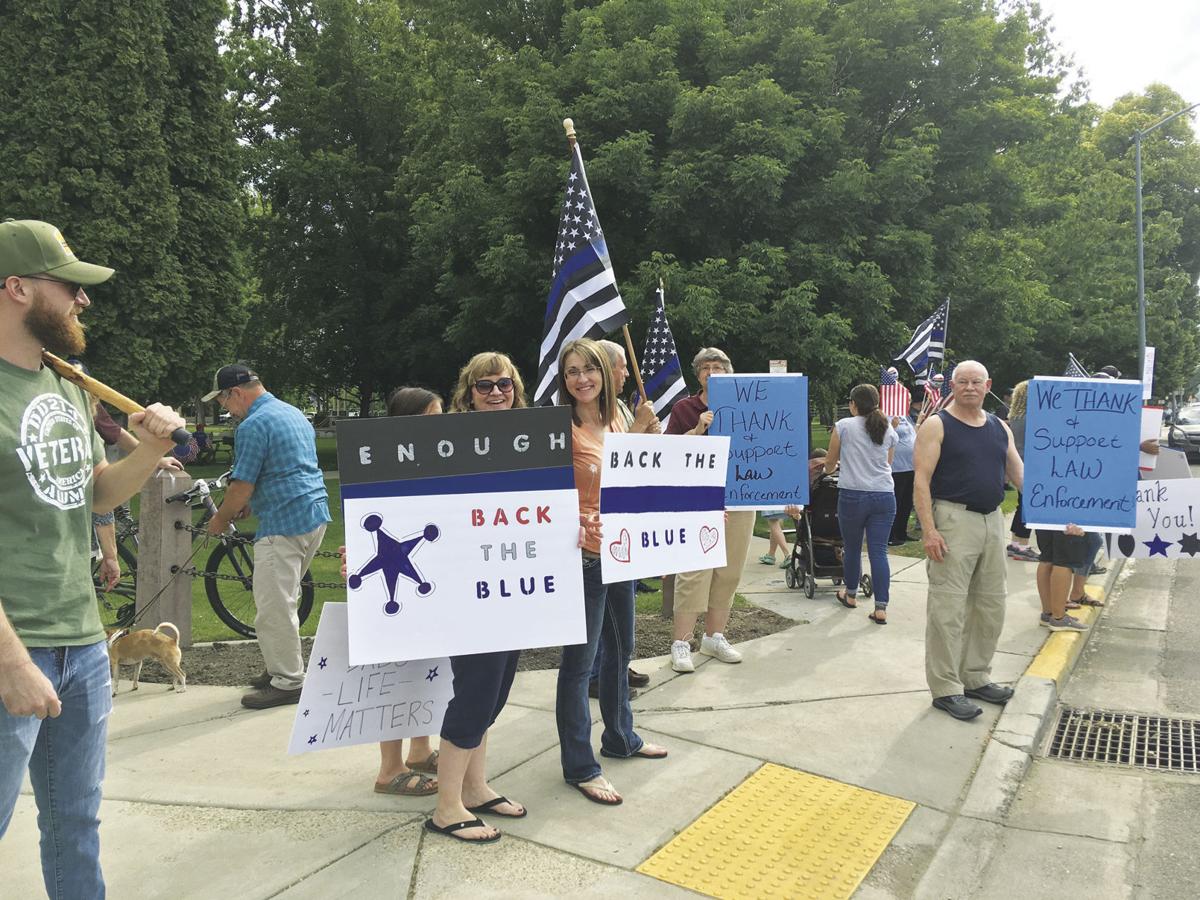 Will Mercado, far left, Tammy Mercado, holding sign with the blue badge, Shannon Aydelotte, holding “Back the Blue” sign, is beside her, and at right is Wes Dickison. 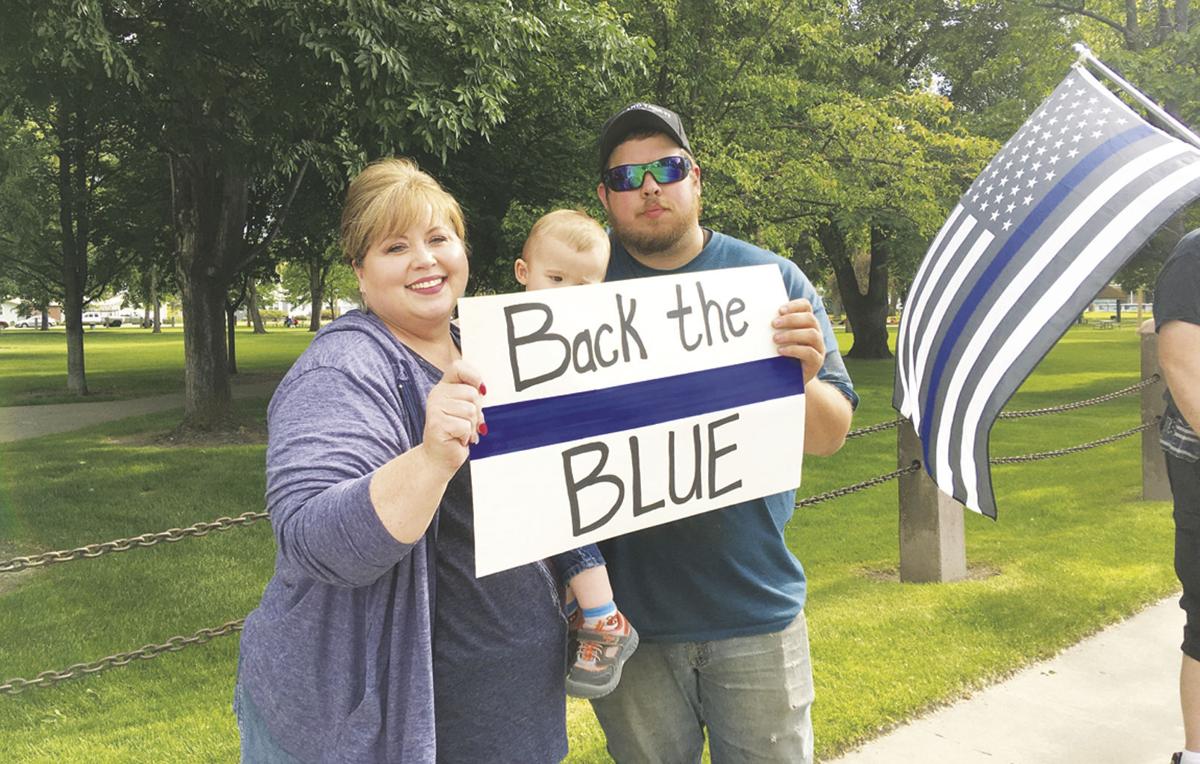 Will Mercado, far left, Tammy Mercado, holding sign with the blue badge, Shannon Aydelotte, holding “Back the Blue” sign, is beside her, and at right is Wes Dickison.

On Friday afternoon about 50 people gathered along a section of Baker City’s busiest street to show their support for law enforcement.

Many black-and-white flags with a blue line — a symbol of support for police — waved, and the occasional MAGA hat, President Donald Trump’s “Make America Great Again” slogan, was seen in the crowd.

“We really love our police, we need to support them, they’re the ones that protect us,” said Patti Hanley, a lifelong Baker City resident. “There’s always bad apples and they need to get rid of them however they can, but I do support the police.”

Ida Scott said that she attended the event to show her support for both law enforcement and first responders.

“This is the first time I’ve gone to a rally,” Scott said.

Since the killing of George Floyd May 25 during his arrest in Minneapolis, rallies have erupted across the country, and in some cases protesters have called for reducing police department budgets or replacing departments.

Tom Wilcoxson, a Baker City resident and former police officer, thinks the people calling for such changes are misguided.

Tim Fisher, a retired Baker County sheriff’s deputy who grew up on a cattle ranch near Haines and spent 21 years on the force, echoed these sentiments.

“I’m a retired law enforcement officer and I feel like the actions of one corrupt officer is causing a group to demonize the rest of law enforcement, which are not — people join law enforcement to help people,” Fisher said. “What happened to George Floyd would never happen in Baker City, ever.”

Jason Smith, a Baker City resident, said he turned out Friday to support officers such as Wilcoxson and Fisher as well as police in general.

“I think police officers have been given a bad name for something that isn’t really their fault as a group,” Smith said. “Showing my support is the least I can do for them putting their lives on the line for me every day.”

Lois Myers, also of Baker City, said she supports the police, and believes they’re important to the city as well.

“I think they contribute a lot to the community,” Myers said.

Beckie Gwynn, however, had the most to say about law enforcement officers on both a personal and professional level.

“I have a lot of friends that are cops, and they are good people,” Gwynn said. “I think first and foremost we need to remember that they are people, they have families and wives and children just like the rest of us. Maybe there might be a handful that have some issues, but I think the majority are out there to do their job.”

“I work out at the gym with them,” Gwynn said. “I coach Little League with them. They’re just normal average people like the rest of us, but they have a harder job.”

“We really love our police, we need to support them, they’re the ones that protect us.”