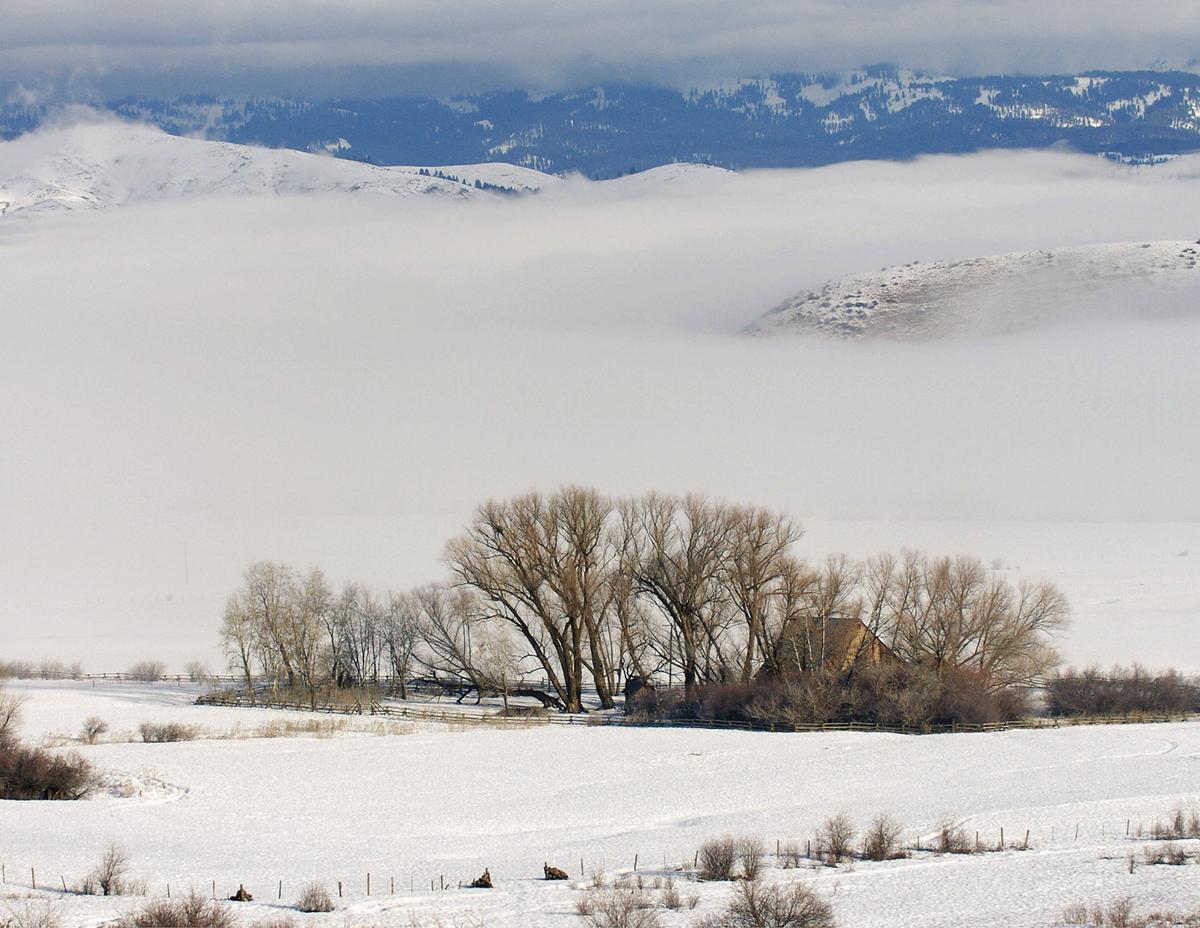 The Pine Valley in eastern Baker County, about 52 miles east of Baker City, is one of the snowiest places in Eastern Oregon even though its elevation, 2,600 feet, is lower than Baker City, La Grande and Enterprise. Meteorologists say the Pine Valley’s proximity to the Wallowa Mountains, and its orientation, make it susceptible to temperature inversions that hold cold air, and in this photo fog, close to the valley floor and make it more likely that storms will drop snow rather than rain. 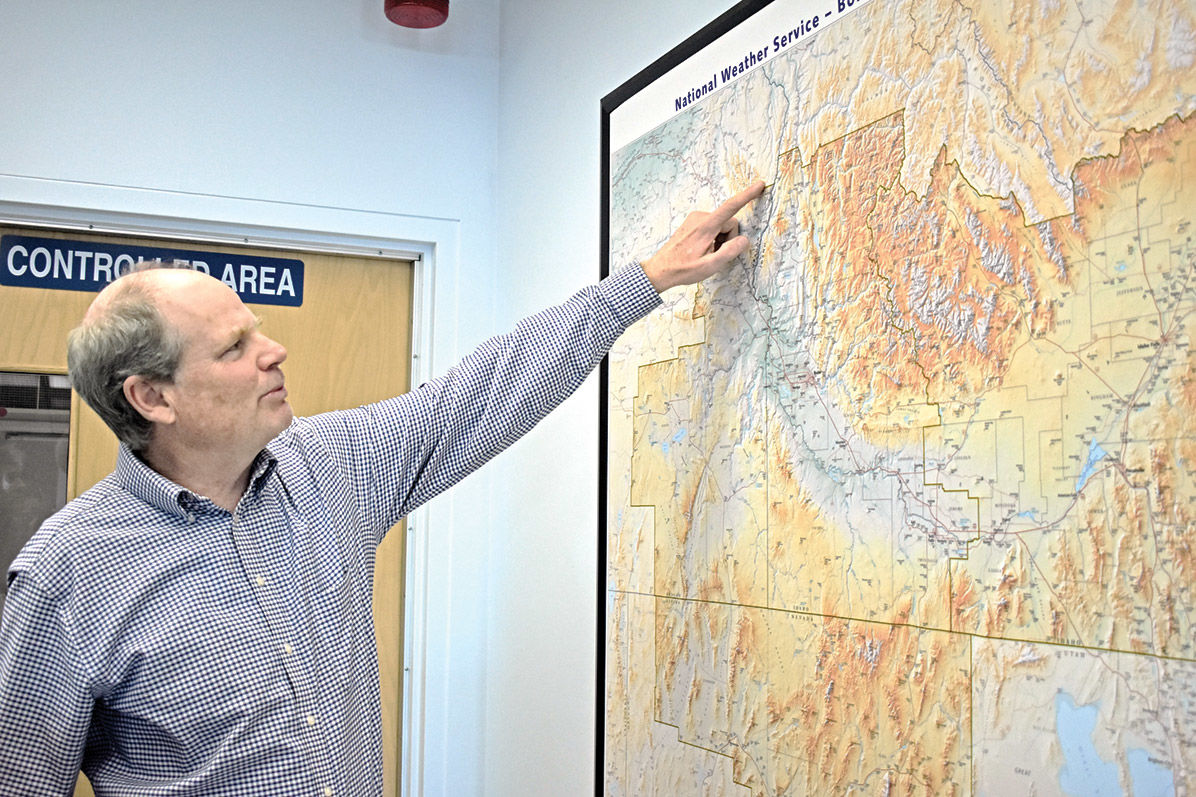 Jay Breidenbach, warning coordination meteorologist at the National Weather Service office in Boise, points to a topographic map showing Pine Valley in Baker County, a microclimate that poses a challenge to forecasters.

The Pine Valley in eastern Baker County, about 52 miles east of Baker City, is one of the snowiest places in Eastern Oregon even though its elevation, 2,600 feet, is lower than Baker City, La Grande and Enterprise. Meteorologists say the Pine Valley’s proximity to the Wallowa Mountains, and its orientation, make it susceptible to temperature inversions that hold cold air, and in this photo fog, close to the valley floor and make it more likely that storms will drop snow rather than rain.

Jay Breidenbach, warning coordination meteorologist at the National Weather Service office in Boise, points to a topographic map showing Pine Valley in Baker County, a microclimate that poses a challenge to forecasters.

BOISE — Korri Anderson shakes his head and utters a rueful chuckle when he hears a sentence that includes both “snow” and “Halfway.”

For Anderson, whose job is to forecast weather, Halfway, a town in eastern Baker County, is an enigma.

Halfway, and the Pine Valley in which it sits, are places where certain of the reliable properties that define weather prediction frequently do not apply.

The peculiar nature of this place, which measures only about 5 miles by 6 miles, presents itself most notably during winter, and specifically in the form of snow, said Anderson, a forecaster at the National Weather Service office in Boise. That office, although in Idaho, issues forecasts for Baker, Harney and Malheur counties in Oregon.

Halfway’s snowfall totals in many years are better measured in feet than in inches.

This aspect of Halfway’s climate seems particularly abnormal when compared with the neighboring Eagle Valley, just 6 miles or so to the southwest as the magpie flies.

Quite often during midwinter the Eagle Valley’s only incorporated city, Richland, will be snow-free while in Halfway the drifts are burying ranch fences.

Historical records, which date to 1936 in Halfway and to the late 19th century in Richland, put the difference in stark contrast. Halfway’s average yearly snowfall is 69 inches, Richland’s 17 inches.

Although Halfway’s elevation is higher — 2,600 feet compared with Richland’s 2,200 — and snowfall tends to increase with altitude, that difference of 400 feet is much too modest to explain the dramatic snow discrepancy, Anderson said.

Indeed, Halfway is much snowier on average than sites at higher elevations such as the Baker City Airport, which is 800 feet higher but averages about 27 inches of snow per year.

More confounding still, the summit on Highway 86 between the Pine and Eagle valleys, though more than 1,000 feet higher than Halfway, often will have less snow, creating the seemingly backward situation in which the snow gets deeper as you drive down the mountain toward Halfway.

Two factors that contribute mightily to the climatological anomaly that is the Pine Valley are its topography and its location relative to the Wallowa Mountains, whose peaks are the tallest in Eastern Oregon, said Anderson and Jay Breidenbach, warning coordination meteorologist at the Weather Service’s Boise office.

Firstly, it is, well, a valley.

Because cold air is heavier than warm, cold air sinks. This means that sometimes on calm winter days and nights, especially when there’s snow on the ground to reflect the sun’s heat but no clouds to keep some of that heat from escaping into the atmosphere, valleys tend to be colder than surrounding ridges.

Meteorologists call this situation a temperature inversion because it inverts, or reverses, the typical temperature profile, which is that air grows colder the higher you climb.

(There’s a reason glaciers typically form on mountains rather than in valleys.)

Pine Valley also has a nearby source of cold air in the towering Wallowas, since chilled air tends to drain, as water through a funnel, down into the valley, especially on clear, calm winter nights, Breidenbach said.

All valleys are susceptible to temperature inversions, but Breidenbach said inversions typically persist longer in relatively small valleys, such as Pine Valley.

It takes wind to end an inversion — to “scour out” the cold air and replace it with warmer air, he said.

In a broader valley such as Baker Valley, winds that accelerate into the valley as they descend from surrounding higher ground can more easily spread out and displace the trapped cold air, Breidenbach said.

Baker Valley’s higher elevation compared to Pine Valley’s also contributes to this tendency, he said. Because wind speeds generally increase the higher you go, a valley at 3,400 feet is more likely to have its temperature inversion ended by winds — what meteorologists call “mixing out” — sooner than a lower valley where the winds don’t reach as early.

(Eagle Valley, though lower than Pine Valley, is oriented in such a way that it’s more susceptible to south and west winds, which most often push cold air out of valleys.)

The second factor that helps explain Pine Valley’s prolific snowfalls is its proximity to the Wallowas. That range, is large and high enough that when moisture-laden Pacific storms sweep in from the west, the air is forced to rise and cool, and because the colder air is the less water it can hold in vapor form, the sodden clouds disgorge much of their moisture.

Pine Valley is close enough to the Wallowas that a significant amount of the moisture that douses the peaks spills into the valley. And because the temperature is often below freezing during winter due to the aforementioned inversion effect, what falls is more likely to be snow than rain, Breidenbach said.

The influence of the Wallowas is even more blatant at Cornucopia, the old gold-mining ghost town about 9 miles northwest of Halfway. Although Cornucopia’s elevation of 4,900 feet is still modest for the Wallowas, where more than two dozen peaks top 9,000 feet, the annual snowfall there, measured from 1909 to 1972, was 244 inches — more than 3ﬁ times Halfway’s average.

Baker City, of course, is also close to a major mountain range — the Elkhorns, where Rock Creek Butte reaches 9,106 feet.

But there are differences between Baker City and Halfway that have dramatic effects on snowfall in the two places, Breidenbach said.

Baker City is a bit farther from the mountains than Halfway is, and as winds from passing storms descend the Elkhorns the air, through compression, warms. This warm air can hold more moisture, and by the time the air reaches Baker City, even though the distance is just 6 miles or so, the effects of compression can drastically reduce the amount of precipitation, Breidenbach said. That helps explain why the Elkhorns have the opposite effect that the Wallowas have on Pine Valley — forming a rain (and snow) shadow that extends over much of Baker Valley.

The importance of proximity to the mountains is easily enough illustrated by comparing snow depths at the base of the Elkhorns and in Baker City. Although the elevation difference is only about 600 feet, snow at places such as Marble and Rock creeks can be 2 feet deep when there’s little or no snow in Baker City. The base of the Elkhorns is basically the same sort of microclimate as the Pine Valley — close enough to share in the mountains’ snow bounty, but not far enough from the peaks to languish in their snow shadow.

The trouble for forecasters such as Anderson is that the sophisticated computer weather models they use lack the resolution, as it were, to account for microclimates such as the Pine Valley.

Anderson, who has worked at the Weather Service office in Boise for several years, said he came to understand this limitation in the models, and to adjust forecasts accordingly.

Even so, because the Weather Service doesn’t generate a specific forecast for an area as small, and sparsely populated, as Pine Valley, forecasts that rely largely on models will still sometimes call for rain in Halfway even when Anderson knows it’s likely to be snow.

“Some of these microclimates can be difficult to figure out,” Breidenbach said.

Baker County’s Pine Valley isn’t the only such anomaly in the mountainous West, where the dramatic topography complicates weather forecasting. The same mountain range can confound even the cleverest computer models by making some areas soggy while creating rain-shadowed near-deserts in others.

He said the institutional knowledge among forecasters at the Boise office, concerning such places as Pine Valley, is passed to new employees so they, too, will recognize when the models might be leading them astray.

“Some of these microclimates can be difficult to figure out.”