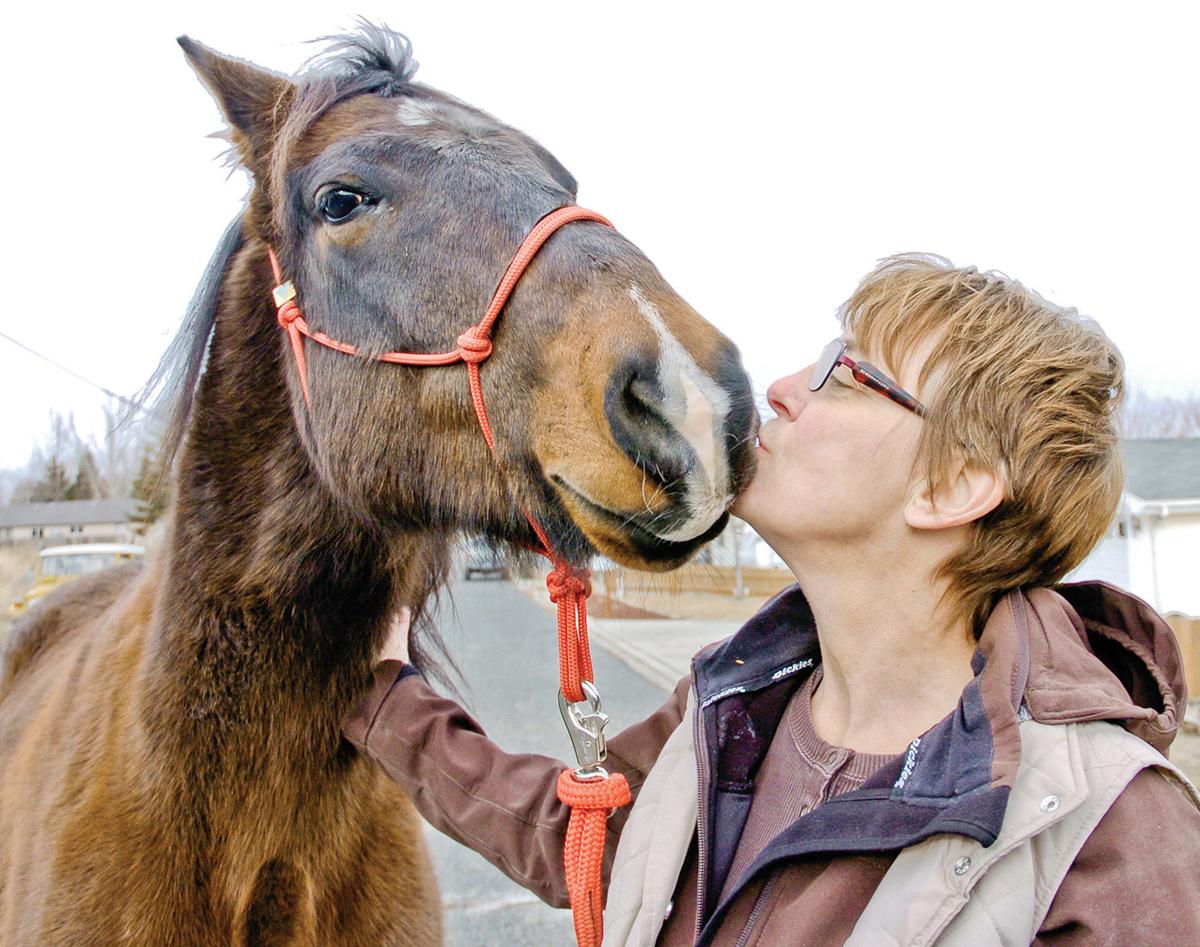 A horse called Norm, an adopted wild stallion, is very affectionate with owner Debbie Henshaw and others. 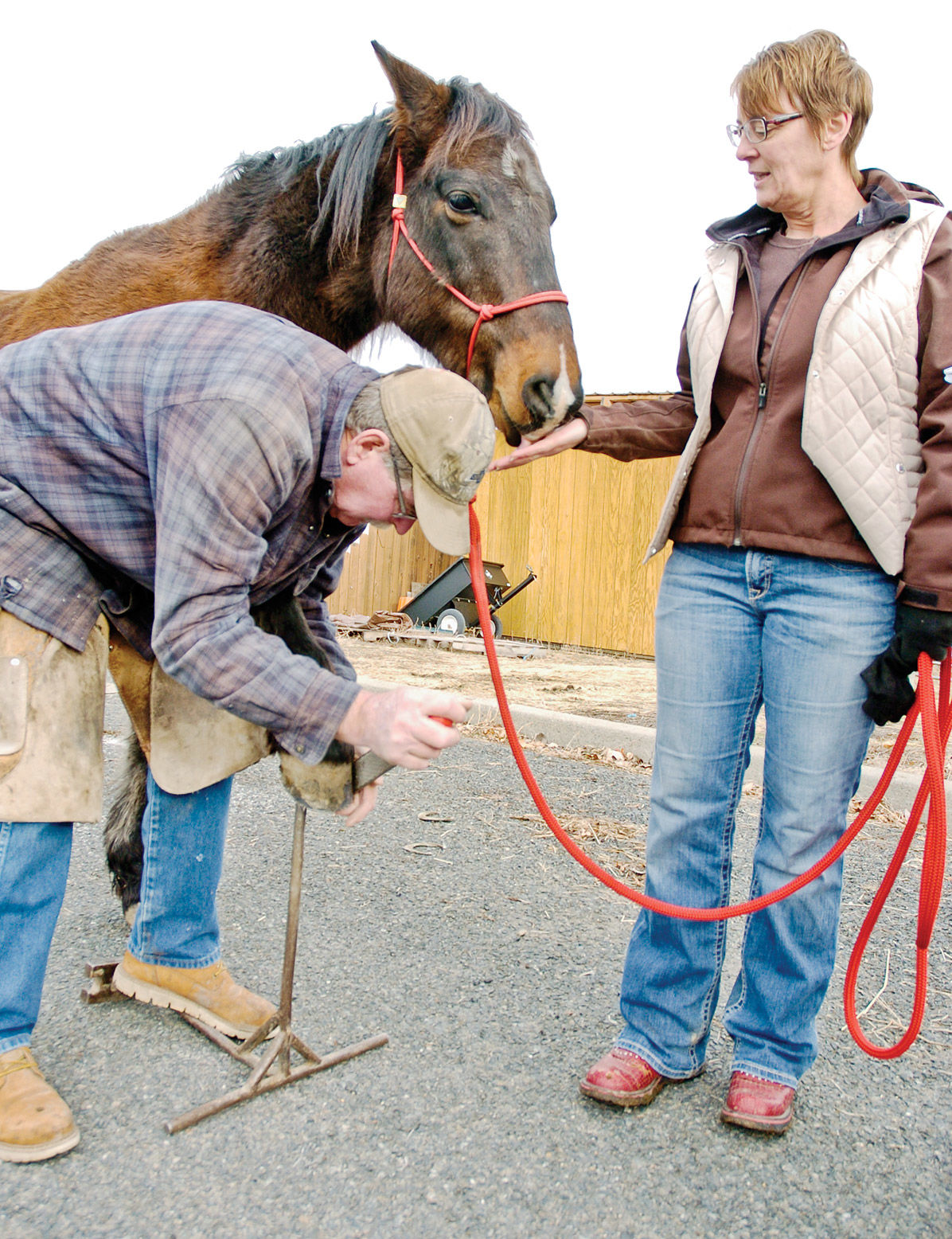 Norm stands easy for owner Debbie Henshaw as he gets his hooves trimmed and filed by farrier Alan Elsberry Thursday morning. 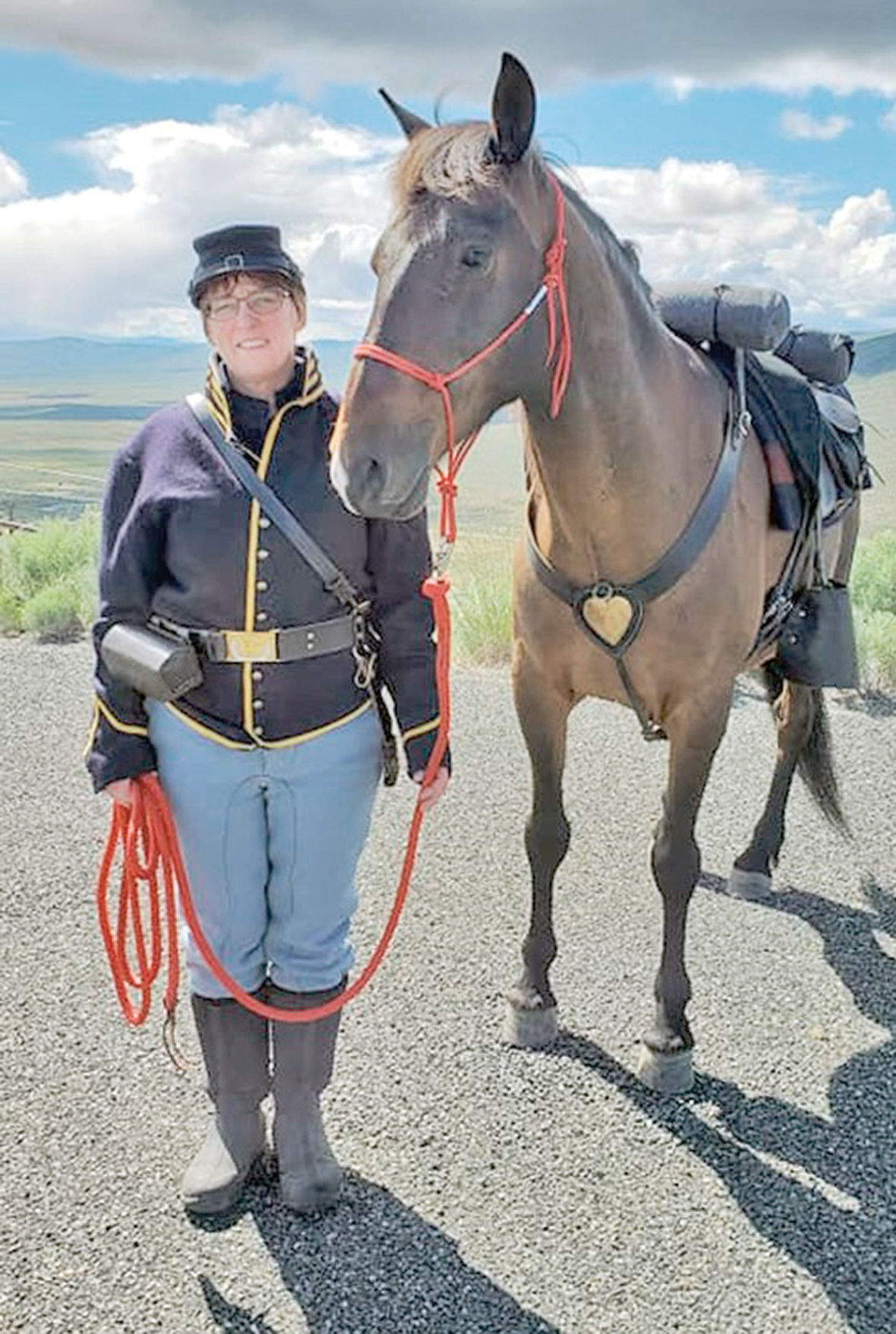 Norm and owner Debbie Henshaw have dressed in late 19th century cavalry style, adding a living history element to their programs at the Oregon Trail Interpretive Center and inspiring questions about equine history in the Northwest.

A horse called Norm, an adopted wild stallion, is very affectionate with owner Debbie Henshaw and others.

Norm stands easy for owner Debbie Henshaw as he gets his hooves trimmed and filed by farrier Alan Elsberry Thursday morning.

Norm and owner Debbie Henshaw have dressed in late 19th century cavalry style, adding a living history element to their programs at the Oregon Trail Interpretive Center and inspiring questions about equine history in the Northwest.

He also likes to give kisses.

Norm is an 11-year-old wild mustang gathered from public land near Murderers Creek in Grant County.

His owners, Debbie and Calvin Henshaw of Baker City, adopted Norm in 2014, when he was 6.

She’s been raising horses for 35 years. Calvin, 59, did all of the training on the horses and she does “back up training.”

Debbie brought Norm to the Interpretive Center on July 4, 2014, to introduce him to people.

“We liked it so much that first time that we took him up just to expose him, that we just kept doing it,” Debbie said.

As a wild horse, Norm needed time to become accustomed to being around people.

“Back then, for a couple of years, we did a program called Horse Sense, where we taught how horses use their instincts to survive in the wild,” said Debbie, who works to promote the adoption of wild horses gathered from Oregon and other states in the West.

Today, the Henshaws have their own presentation at the Interpretive Center — Meet and Greet with a Horse Called Norm.

The program is designed to educate visitors about the BLM’s wild horse adoption program.

The Henshaws and Norm also participate in the Wild Horse and Burro Day event that Calvin started at the Interpretive Center.

The couple have also dressed in authentic cavalry costumes for the pet parade at the Center.

Larisa Bogardus, public affairs officer for the BLM’s Vale District, recently wrote a story for the BLM Daily publication about Debbie and Norm being recognized for their more than 250 hours of volunteer service at the Interpretive Center.

Debbie was interested in learning more about Norm’s lineage, so she sent in some of his hair for DNA testing. She learned that his origin is typical of horses used by U.S. cavalry in the Murderers Creek area. She suspects Norm’s descendants are cavalry horses released or lost in the remote area west of John Day and south of the John Day River.

Debbie suspected the latter because Norm is so light on his feet.

Debbie said she will continue to work with Norm in hopes of having him ready to participate in parades.

“I really want to get Norm ready for parades,” she said. “We tried it once for the Christmas parade a few years ago. Walked him into town, had him all decked out in lights and everything. But it was just too much stimulation for him.”

To prepare him for such situations Debbie is introducing Norm to “all kinds of strange situations.”

Norm is gentle with Debbie and with young visitors at the Interpretive Center.

She takes treats for little kids to give Norm, and he waits until he finds his treat with his lips before taking the morsel, whereas some horses might inadvertently bite a child’s thumb.

Norm wasn’t always so open with his affection.

Debbie said when she and her husband adopted Norm, they could pretend to touch him and he would twitch. He also didn’t like having his face touched.

But when Debbie found out he liked peppermints, she would say “Norm, may I have a kiss” and touch her chin. If he made the slightest movement toward her, she would give him a mint and made him move closer and closer until she could pet his face.

“I tell people at the Interpretive Center if they want a kiss, just do that — Norm, may I have a kiss please and he’ll give a kiss,” Debbie said.

According to a Facebook story Debbie wrote, Norm lived for two years at the BLM’s wild horse corrals near Burns.

“He was extremely terrified when he came out of the corrals,” she said. “He could clear a six-foot fence from a standstill. He still can, but he chooses not to.”

A friend of Debbie’s, Lise Yervasi, had taken Norm out of the corrals to enter him into the Extreme Mustang Makeover of 2014, an adoption event put on by the Mustang Heritage Foundation.

Yervasi asked Debbie and Calvin to help in his training and gentling before the competition.

Debbie said Norm was initially adopted by a woman in Nampa, Idaho.

“Two months later, her situation changed and she needed to rehome him, so we went over and picked him up and brought him home,” Debbie said.

She continues working with Norm to help him feel secure with her, so he knows if he is with her, he is perfectly safe.

Debbie said she usually tries to take Norm to the Interpretive Center two times a month and sometimes for a special event, such as the Wild Horse Day in June.

Norm meets a lot of people and excited kids at the Center.

“They’re pretty amazed when I tell them that they just touched a wild horse,” Debbie said.

Due to safety issues, the children cannot ride Norm, but they can pet and give him treats.

“Norm loves children, but does not like children on his back because they squeal and make funny noises. But he has always really reached out to the children,” Debbie said.