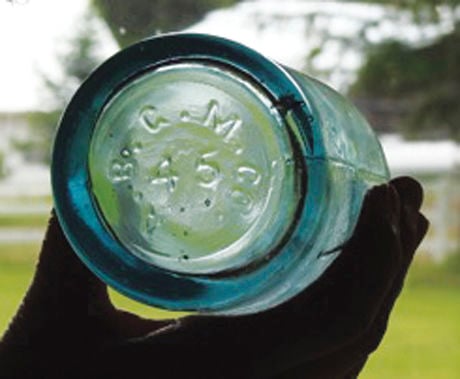 The base of the bottle bears the initials of the Adolphus Busch Glass Manufacturing Company. 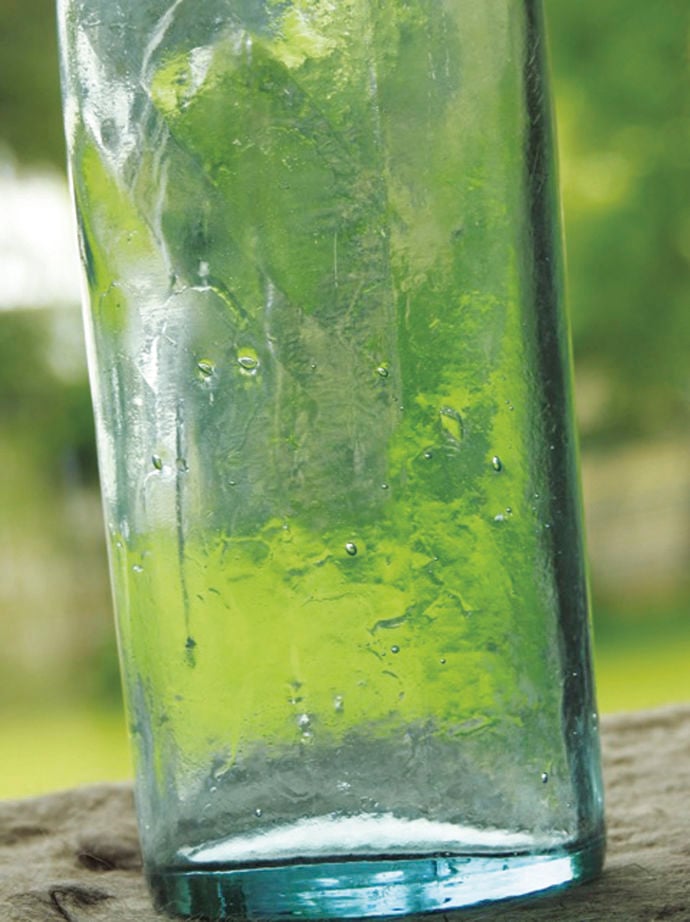 Air bubbles scattered around the bottle are typical of handmade glass.

The base of the bottle bears the initials of the Adolphus Busch Glass Manufacturing Company.

Phil Reindl was maybe one shovel thrust away from transforming an interesting artifact into a pile of pretty, colored glass shards.

But the sound the blade made on his previous blow prompted him to pause in his excavation.

Reindl, who lives near Pine Creek, at the base of the Elkhorn Mountains about a dozen miles northwest of Baker City, was digging out the stump of a thick old maple tree on June 15.

The site is beside Spring Creek, a small tributary of Pine Creek.

He was about 2 feet down when his shovel struck something he initially thought was a rock.

There were plenty of those mixed into the soil caked around the tree’s roots.

But before he raised the tool for another whack, Reindl, still curious about the timbre his shovel had made, recognized the object as glass.

But not the flawless glass of a modern container.

This was a bottle.

And after Reindl had prised the bottle from the dirt and washed it off with water, he could tell, from the air bubbles and some apparent stretch lines on its neck, that this was a handmade item, crafted before machines churned out perfect clones of such containers by the thousands every day.

“I thought, ‘holy cow, that’s been there as long as that tree’s been growing,’ ” Reindl said. “It was an amazing it was in such good condition.”

Particularly after he banged it with his shovel.

He and his partner, Cindy Birko, went online to do some sleuthing.

They were not without clues.

The base of the bluish-green bottle is emblazoned with “A.B.G.M. Co.” arrayed in a rainbow shape around the numbers “4” and “5.”

Reindl and Birko quickly learned that the bottle was likely made by the Adolphus Busch Glass Manufacturing Company, and probably in the late 1800s or early in the 1900s.

Busch was a co-founder, with his father-in-law, Eberhard Anheuser, of perhaps the most famous beer-brewing outfit in history.

Anheuser-Busch created the Budweiser brand, and the bottle’s original contents might well have been about a pint of that very beer.

“It’s really fascinating,” Birko said. “We think it’s tied into the mining history of the area.”

Birko said the first structure on the 5-acre property where she and Reindl have lived since 2017 was a miners’ cabin, although they don’t have any detailed information about the cabin or when it was built.

Reindl said he has found one other artifact, a rusty gold pan, in the creek.

Reindl said he’s thankful that the blow that revealed the bottle was made with the shovel rather than with the other tool with which he was battling the roots.

That’s a pulaski — a firefighting tool that has an axe on one side of its head and an adze on the other.

Either implement would have been more likely than the shovel to shatter the bottle.

Reindl and Birko plan to keep the bottle, at least for now. They said they might consider donating it a museum, such as the Baker Heritage Museum.

And they’ll be looking for other bits of history while clearing brush and doing other work on their place.

“I’d love to have a metal detector,” Birko said.

Back in the days before garbage pickup, people buried their garbage. I've dug into several old pits outside Baker City. And it is mostly garbage. But you also get a window into another age. That itself is priceless.

Metal detectors would just frustrate you in this case. A careful digging in the surrounding area might reveal more treasures. Look for subtle mounds or depressions. Treasure hunts should be fun, so have fun. :)