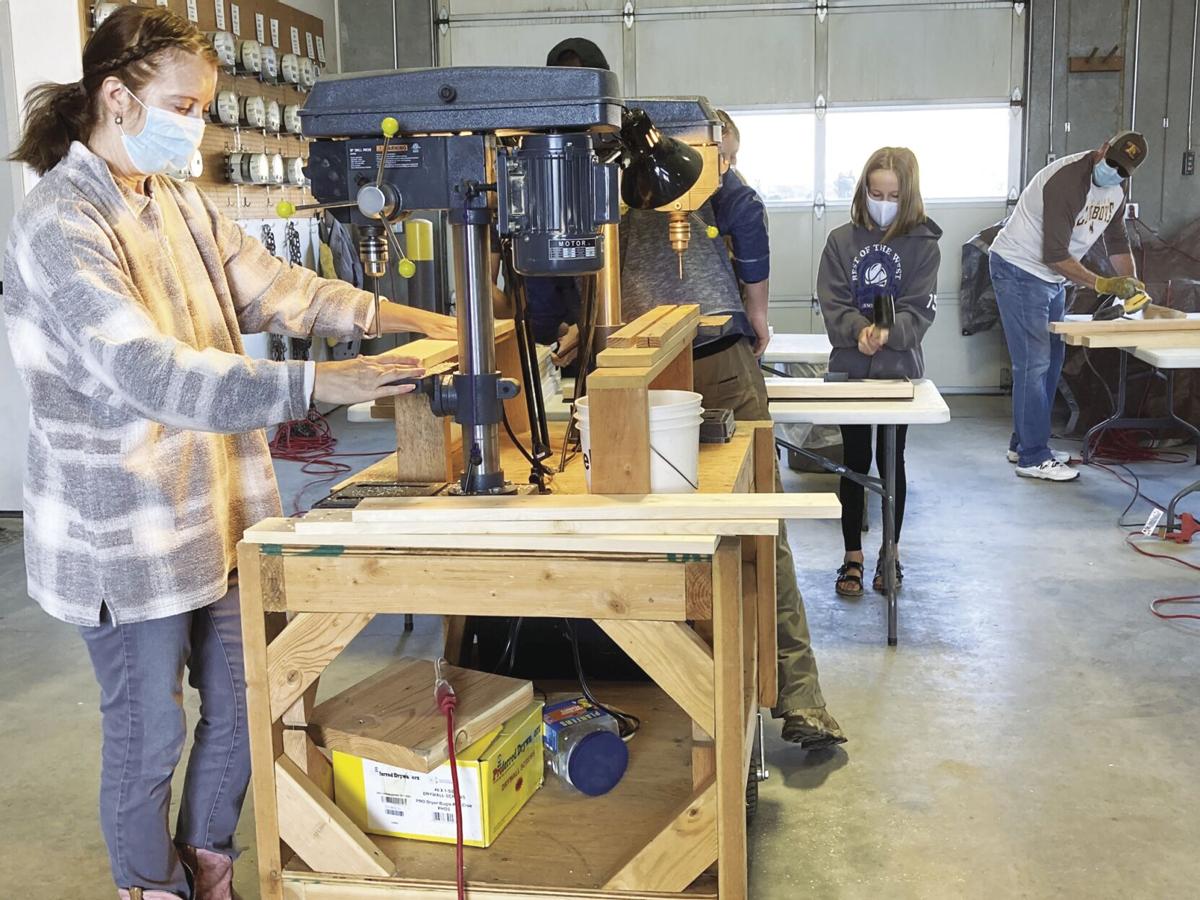 Rachelle McClarin, left, uses a drill press Saturday morning to prepare wooden pieces that will be assembled into a bunk bed. McClarin, who works for Oregon Trail Electric Cooperative (OTEC), gathered with other volunteers to help build the beds for the Sleep in Heavenly Peace project. 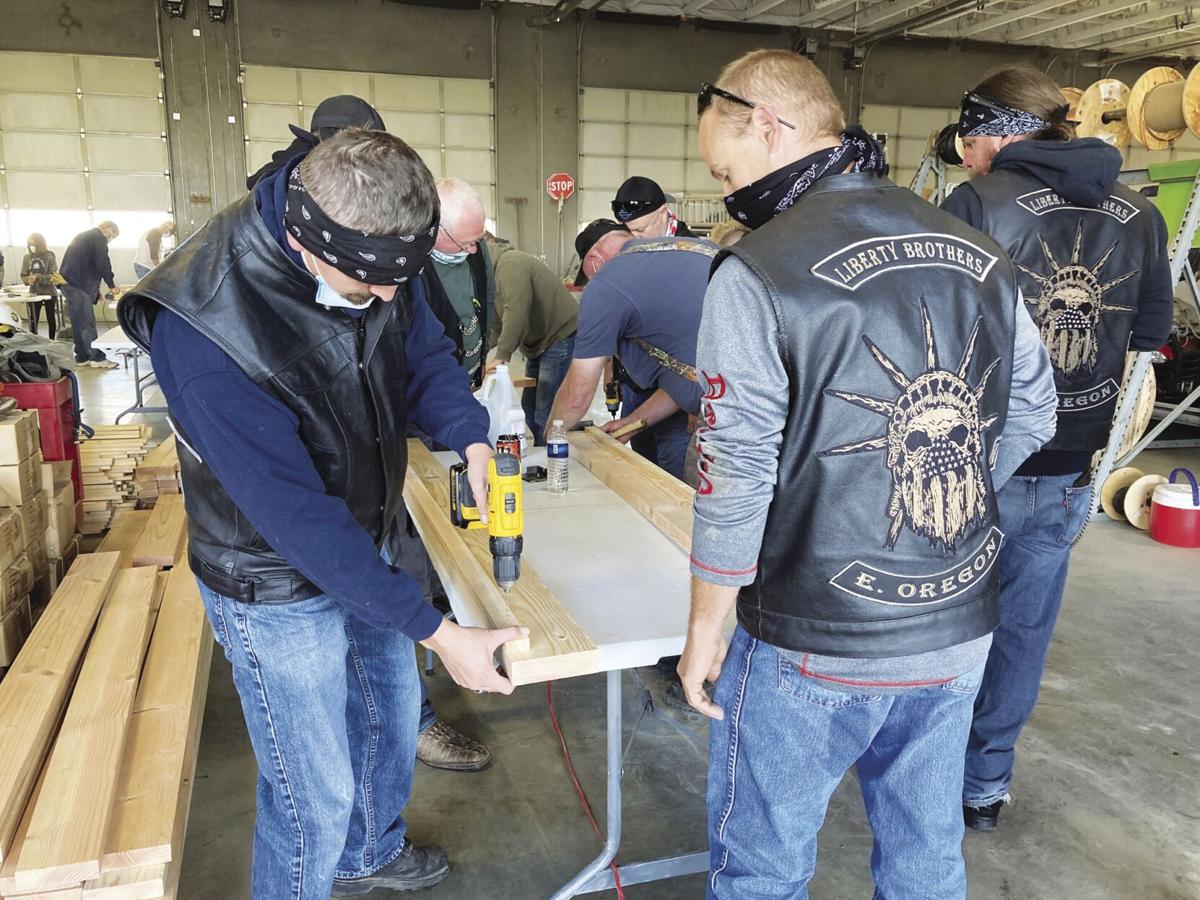 Volunteers from the Liberty Brothers Motorcycle Club helped assemble bed frames Saturday morning at Oregon Trail Electric Cooperative. About two dozen people gathered to build bunk beds that will be donated to children in the area by the nonprofit Sleep in Heavenly Peace organization, which has a chapter in John Day. 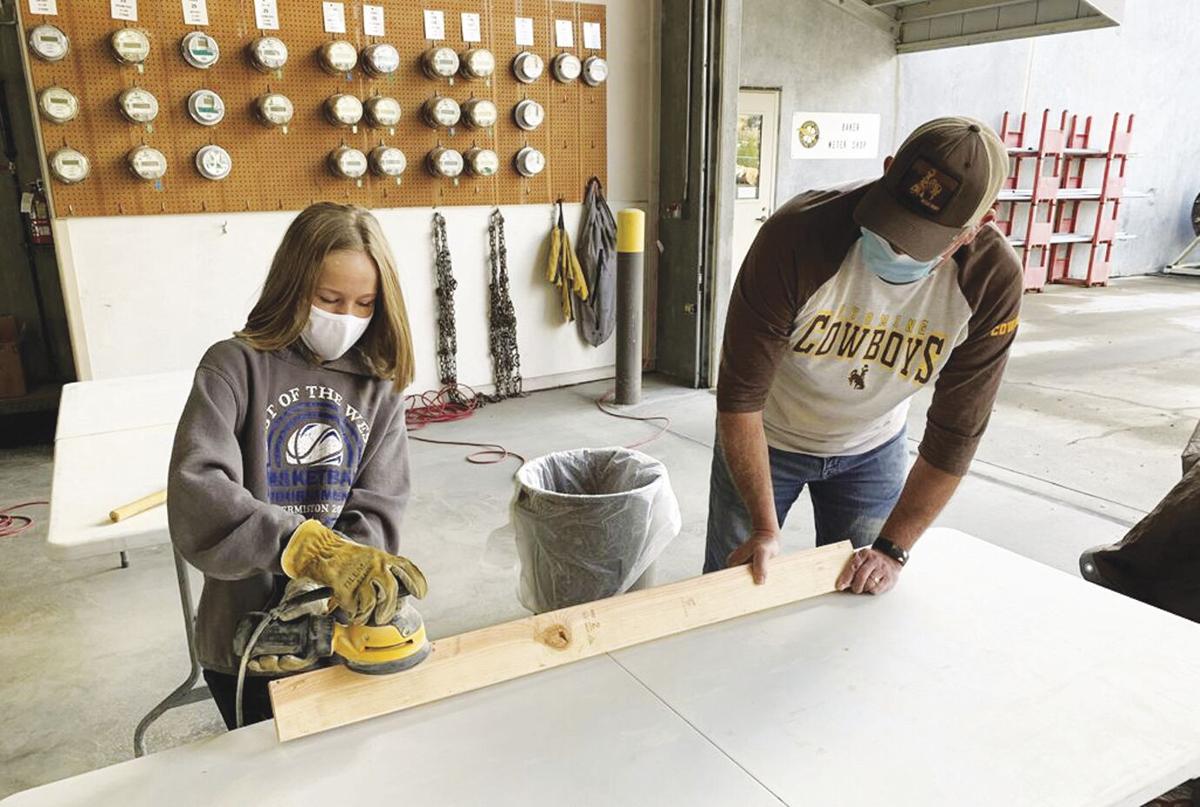 Rachelle McClarin, left, uses a drill press Saturday morning to prepare wooden pieces that will be assembled into a bunk bed. McClarin, who works for Oregon Trail Electric Cooperative (OTEC), gathered with other volunteers to help build the beds for the Sleep in Heavenly Peace project.

Sanders were spinning and other tools whirring as about two dozen volunteers assembled bunk beds for the nonprofit philanthropic organization, Sleep in Heavenly Peace, which provides beds to families.

The nonprofit was started in 2012 in Twin Falls, Idaho. Its nearest chapter is in John Day, said Susie V. Brown, who is the president of that chapter and organized Saturday’s build day at OTEC.

She said the organization, which started with seven chapters, received a major publicity boost in February when TV host Mike Rowe, responding to a request from a Sleep in Heavenly Peace chapter, featured the project on his “Returning the Favor” program.

“After it started airing in the middle of February, they were getting applications to some chapters from across the country,” Brown said.

At one point, the nonprofit had about 1,000 applications from people wanting to volunteer to help build beds.

Today, Sleep in Heavenly Peace has more than 200 chapters nationwide.

“We’re more than happy to support a great project like this,” said Brown, who started the John Day chapter with her husband.

For Saturday’s bed-building event at OTEC, the cooperative donated the use of its equipment, and seven OTEC employees (including two children of employee Ron Rasmussen) were among the volunteers who assembled 14 beds. Those will be combined into seven bunk beds, said Joseph Hathaway, communications manager for OTEC.

Chris Kommer, treasurer of the Baker City Rotary Club, was one of several Rotarians who also helped build beds Saturday.

Kommer said she has also helped deliver a bunk bed to a family in Baker County.

Rotary member Jerry Shaw volunteered as a member of both the club and the Liberty Brothers Motorcycle Club, which had about a dozen members on hand Saturday.

“It’s a great thing that’s going on and so we automatically just jumped in to help,” Shaw said.