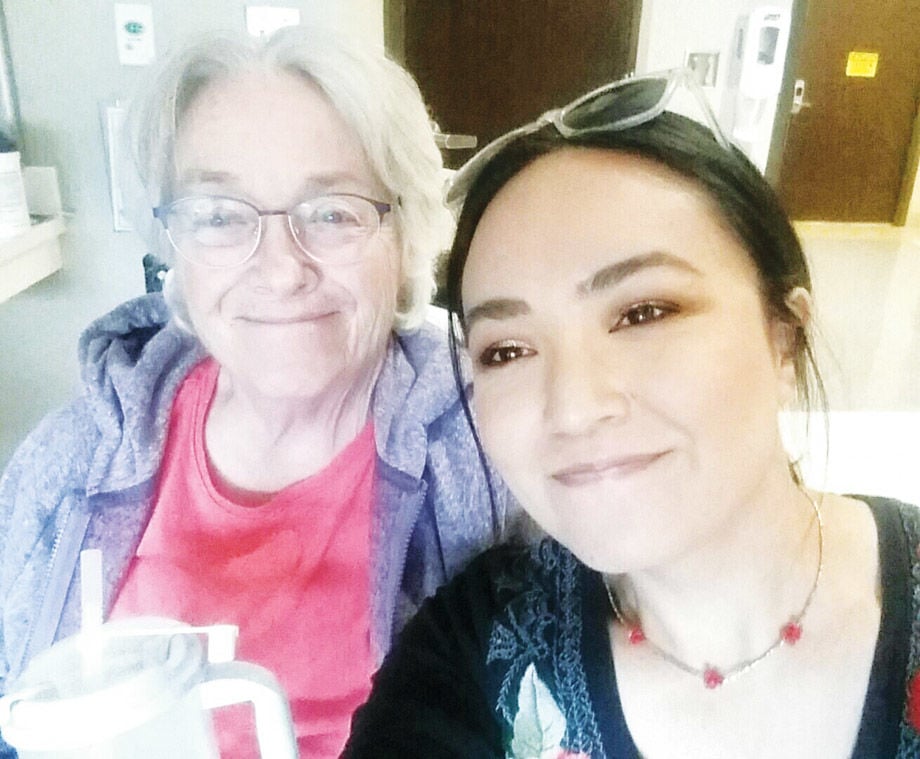 Pam Hall-Brisk, left and her daughter, Anna Brisk, at the Saint Alphonsus Rehabilitation Hospital in Boise on Thursday. 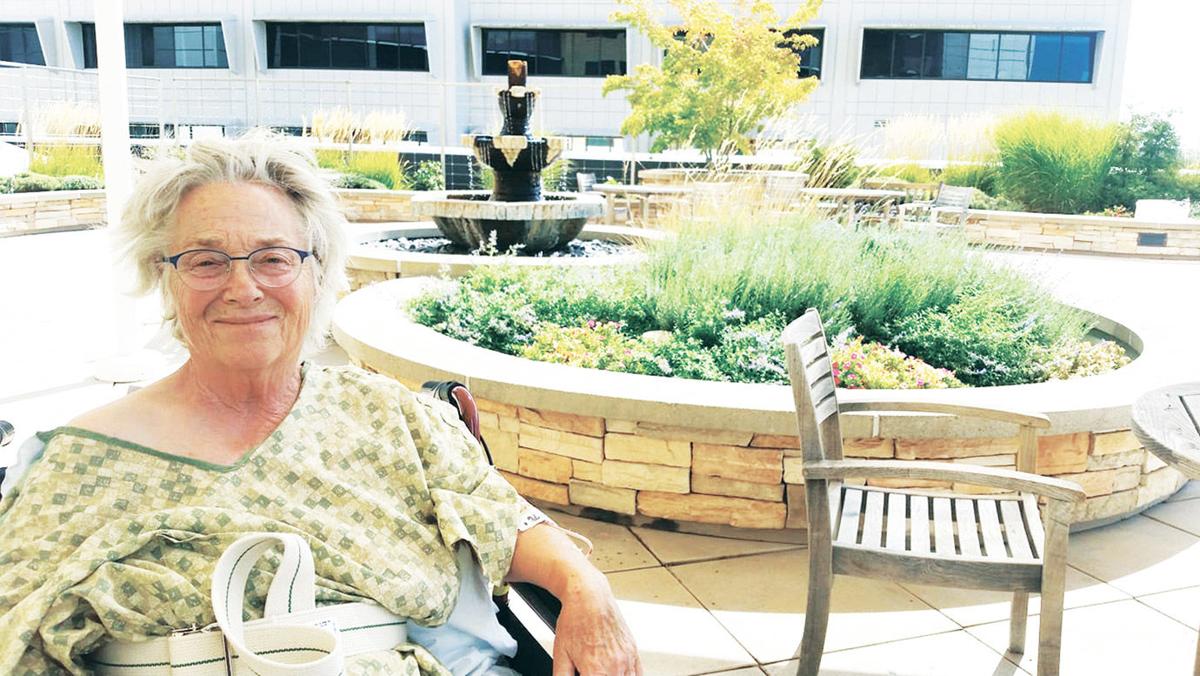 Pam Hall-Brisk of Halfway has been recovering at a Boise rehabilitation hospital since mid September from effects of West Nile virus. She contracted the virus from a mosquito bite and later developed encephalitis and other severe symptoms. 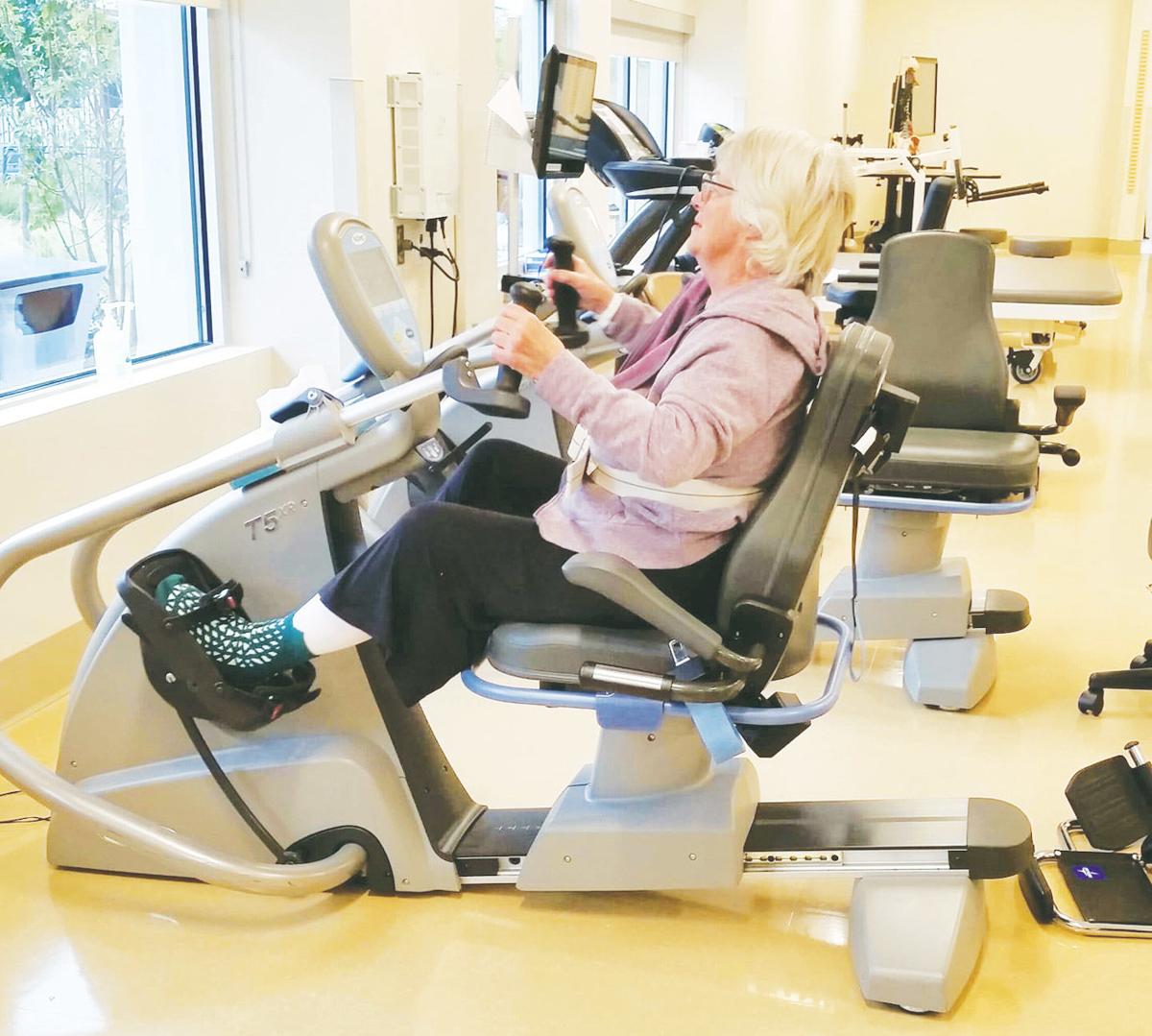 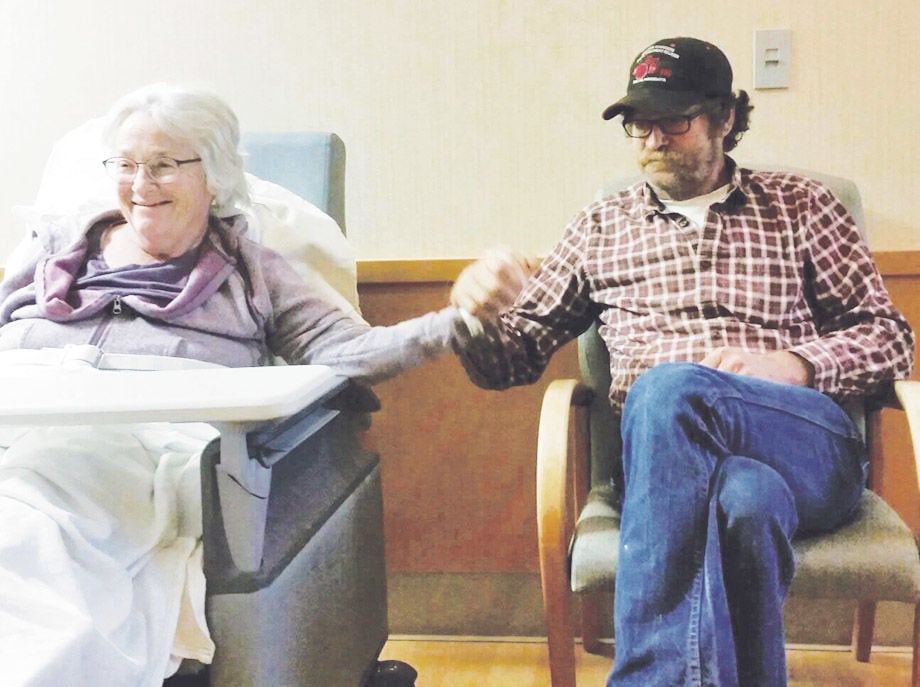 Pam Hall-Brisk of Halfway holds hands with her husband, Marvin, while she recovers from the West Nile virus at the Saint Alphonsus Rehabilitation Hospital in Boise.

Pam Hall-Brisk, left and her daughter, Anna Brisk, at the Saint Alphonsus Rehabilitation Hospital in Boise on Thursday.

Pam Hall-Brisk of Halfway has been recovering at a Boise rehabilitation hospital since mid September from effects of West Nile virus. She contracted the virus from a mosquito bite and later developed encephalitis and other severe symptoms.

When Pam Hall-Brisk couldn’t get out of bed or even wiggle her left leg, her daughter knew this wasn’t the sort of illness easily treated with aspirin and a bowl of chicken soup.

But Anna Brisk didn’t even think about mosquitoes and West Nile virus.

On that afternoon of Sept. 5, Anna was focused on making sure her 73-year-old mother was driven as quickly as possible from her farm near Halfway to Saint Alphonsus Medical Center in Baker City, 53 miles to the west.

“She’s a very, very strong person,” Anna said of her mother, who has lived in the Pine Valley with her husband, Marvin, for 19 years. “When she couldn’t move her left leg at all, that’s when we started worrying that it was more than just the flu.”

Pam had been feeling poorly, suffering from nausea and vomiting, for the previous few days.

But when her condition declined so drastically on Sept. 5 it was frightening, said Anna, 32, who lives near her parents.

She called 911 and an ambulance arrived soon after.

Anna said her mother was so dehydrated that emergency responders couldn’t start an IV in her flaccid veins.

At the emergency room in Baker City, Pam suffered agonizing cramps in her calves.

A doctor examined Pam but decided she could return to Pine Valley.

Anna said that over the next two days she and her father, who’s 64, cared for Pam, giving her sips of water and sports drinks.

On Sept. 7 Pam developed a fever of about 101 degrees. Anna gave her alternating doses of Tylenol and ibuprofen, but around 7 p.m. Pam’s temperature had risen to 102.2.

Anna said she gave her mother a dose of ibuprofen, which Pam immediately threw up, something she hadn’t done for the past three days.

“I wasn’t sure what to do at that point,” Anna said.

She didn’t ponder the matter for long, though.

Soon after she vomited, Pam began to hallucinate.

This time the responders were able to insert an IV needle.

The ambulance arrived at Saint Alphonsus Medical Center in Baker City around 10 p.m. on Sept. 7.

This time the doctor — not the same physician who had treated Pam two days earlier — was “really concerned,” Anna said.

The doctor checked Pam for embedded ticks, although Anna said there was no mention that her mother might have contracted Lyme disease.

Ultimately the doctor told Anna that there were about seven potential diagnoses but it wasn’t possible to test for them at the Baker City hospital.

About 3 a.m. the next day, Sept. 8, a fixed-wing Life Flight aircraft flew Pam to Saint Alphonsus Medical Center in Boise.

Anna, meanwhile, drove home to Pine Valley to pick up some clothes that her mother had asked for, then headed for Boise.

When she arrived her mother was being moved to the intensive care unit. A doctor told her that Pam was almost certainly suffering from one of two ailments — West Nile virus or Guillain-Barré syndrome.

The latter is a rare condition — fewer than 20,000 cases annually in the U.S. — in which a bacterial or viral infection causes the body’s immune system to attack nerves.

Anna said the doctor told her Guillain-Barré syndrome was more likely, and the hospital was already preparing a course of treatment.

As her mother’s gurney was being wheeled to the ICU, Anna said the staff in the emergency room watched in what seemed to her a sort of respectful silence.

“I don’t think that they thought my mom would make it,” Anna said. “It was kind of surreal. I couldn’t believe it was happening.”

Pam’s condition worsened over the next day.

On Sept. 9 her pain increased and she was “agitated and confused,” Anna said.

Hospital attendants had to cover Pam’s hands to prevent her from yanking out her IV and tubes that connected her to various machines.

Later that day, just as a doctor was explaining the treatment protocol for Guillain-Barré syndrome, he got a phone call.

A test of Pam’s spinal fluid showed the presence of white blood cells.

The doctor told Anna that indicated Pam was not suffering from Guillain-Barré syndrome.

Which meant West Nile virus, which is transmitted by mosquitoes to humans, was almost certainly the culprit.

Because antibody tests that confirm West Nile virus take more than two weeks to complete and repeat, the family didn’t know for sure until Sept. 24 that Pam had been infected.

In one sense the absence of certainty didn’t matter, Anna said.

Because West Nile is a virus for which there is no cure, doctors could only continue to administer supportive care for Pam’s symptoms.

About 4 of 5 people infected with West Nile virus never feel sick, and most of the rest suffer only relatively mild symptoms similar to influenza. But rarely the virus can lead to encephalitis, a swelling of the brain that can cause the symptoms that Pam suffered from — confusion, nerve pain and temporary paralysis.

In those cases doctors try to help the patient fight off the infection.

“You wait, and pray that her body would win,” Anna said. “It was not pleasant.”

But Pam did make progress, albeit of the gradual variety.

On Sept. 12 doctors moved her from the ICU to the hospital’s neurology ward.

The next day Pam had improved just enough that she no longer had to be fed by a tube.

“I could see a very small glimmer of turning a corner,” Anna said.

She said her mother remembers nothing about the time she was in the ICU.

“It took a couple of days for the confusion to end,” Anna said. “She was still very weak — she couldn’t sit up on her own.”

But there were additional positive signs as well.

On Sept. 16 Pam moved to the Saint Alphonsus Rehabilitation Hospital in Boise.

Her left leg paralysis eased. She could wiggle her toes but not move the entire leg.

Pam suffered a relapse of sorts on Sept. 26.

Her right leg, which to that point had not been affected, became weak. She went back to the hospital on Sept. 27.

An MRI showed new inflammation along Pam’s spinal cord and into her brain, but doctors told Anna that wasn’t a new problem, but rather lingering effects from the virus.

Anna celebrated her 32nd birthday the same day — in the hospital.

Although Pam’s condition has improved, Anna said doctors have not downplayed the extent of the recovery process.

“It can be a lot like recovering from a major stroke, because it is a brain injury,” Anna said. “It’s just how much can the neuropathways be repaired.”

Anna said doctors told Pam she should make a “mostly full” recovery, although the process likely will take a year.

Pam is scheduled to be released from the Rehabilitation Hospital and return home on Oct. 11.

“She will be coming home in wheelchair,” Anna said. “She still can’t stand on her own.”

Anna said she and her father have been training to help Pam with physical therapy and other aspects of her rehabilitation.

Anna said she is gratified by the amount of support from Pine Valley residents.

“My parents have a lot of friends here, and the whole town it feels like has rushed out in support and care,” she said. “It’s nice to live in such a small town. During hard times it feels like everyone comes together.”

Anna said friends and neighbors have helped care for her parents’ farm animals while she and her father travel back and forth between Halfway and Boise.

Once the West Nile diagnosis was confirmed, doctors asked Pam if she remembered getting any mosquito bites during the period she likely would have been infected, given the virus’ incubation period of 2 to 14 days.

Pam could hardly suppress a chuckle at the notion that a single mosquito bite might be worthy of documenting.

“Which one do you want to see,” was her response.

The reality, Anna said, is that “mosquitoes are just a fact of life out here.”

Pine Valley, in common with Baker, Keating and the other heavily irrigated valleys of Baker County, can at times be an ideal breeding ground for the bloodsucking insects, with plentiful standing water.

Anna said her mother “gardens a lot, and spends a lot of time outside.”

Pine Valley is not within the county’s only mosquito-control zone.

The Baker Valley Vector Control District, which derives its revenue from a pair of property tax levies, covers about 200,000 acres, mainly in the Baker, Keating and Bowen valleys.

Anna said that although she and her parents were aware of West Nile virus — it’s been found in mosquitoes in Baker County most summers over the past dozen years or so, and has also infected several people — the severity of its effects were a surprise.

“We had no concept of West Nile being a dangerous thing,” Anna said.

To that point, Anna notes that although recent freezing temperatures have pretty much done away with this year’s mosquito crop, because people infected might not show symptoms for two weeks or longer, she urges people to be cautious if they suffer flu-like symptoms.

“Both my mom and I want people to be aware,” she said.

Department officials declined to name either of the people due to privacy laws.

Anna Brisk, Pam Hall-Brisk’s daughter, said her mother is one of the two. Anna said the second person, a man younger than her mother, also lives in the Halfway area.

His symptoms were not as severe, but he was hospitalized, Anna Brisk said.

“My parents have a lot of friends here, and the whole town it feels like has rushed out in support and care. It’s nice to live in such a small town. During hard times it feels like everyone comes together.”