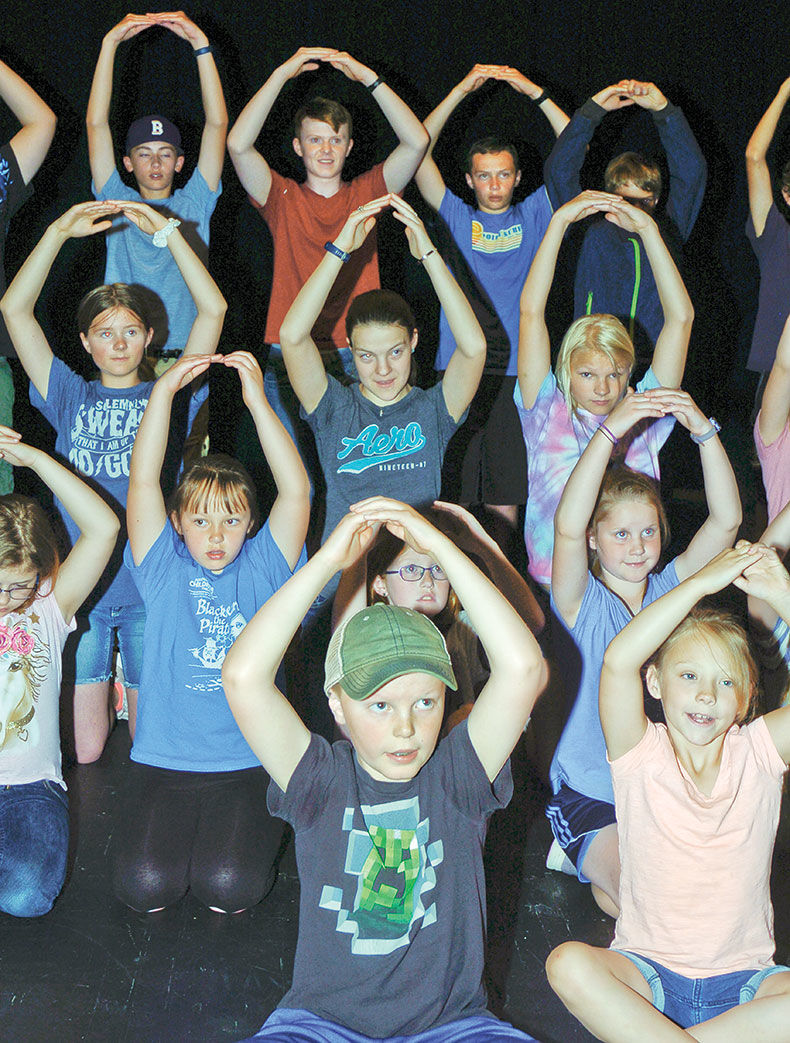 S. John Collins / Baker City HeraldYoungsters in the Circus Band group include Zayne Hills, 9, front center, Madi Cooper, 8, right, and plenty of other children, who are eager to perform their roles on stage. 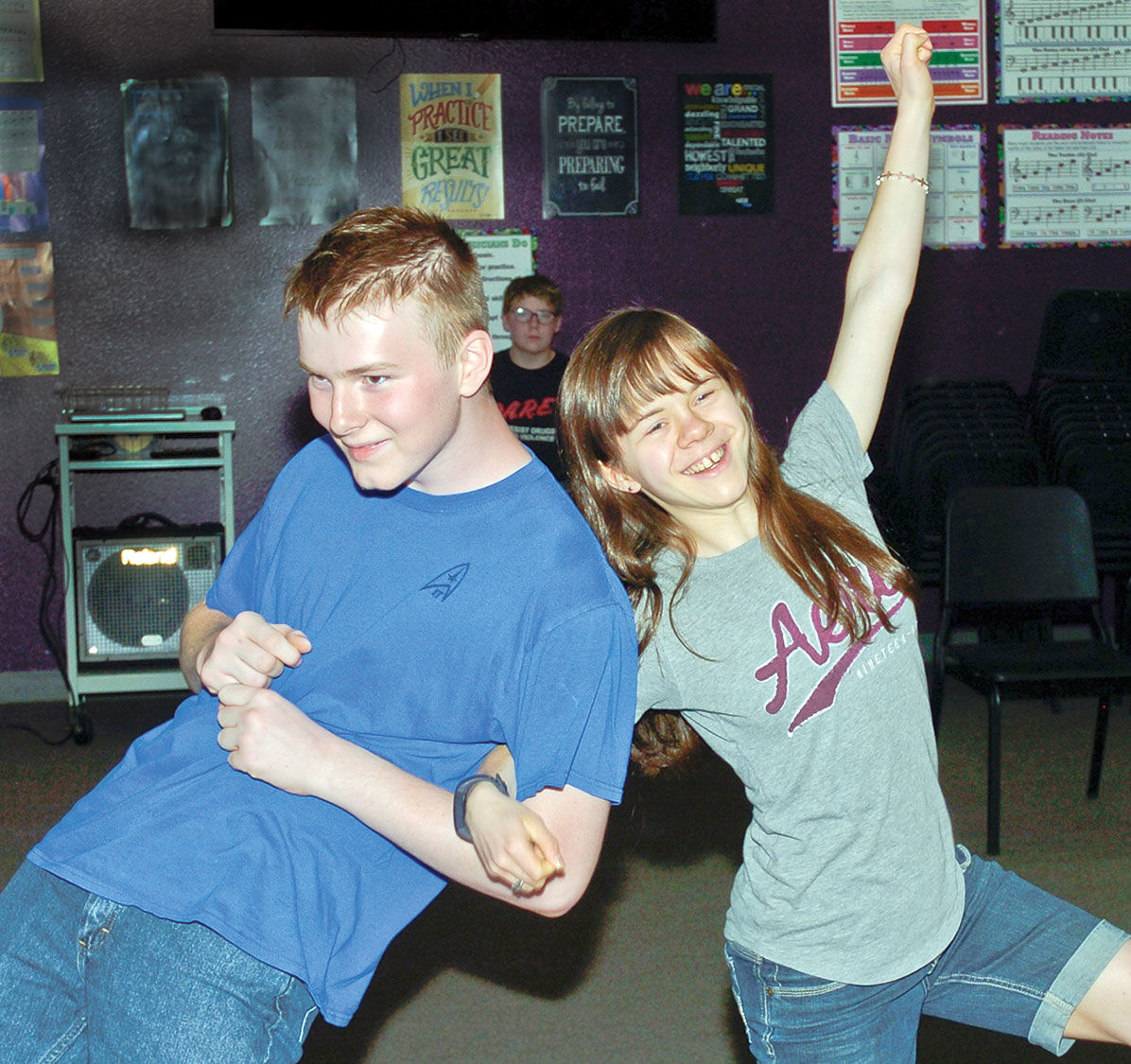 S. John Collins / Baker City Herald“Jack and the Beanstalk” is the newest presentation of the Missoula Children’s Theater. Jack, left, is played by Henry Wood, 15, and Milky White, the cow to be sold for beans, is portrayed by Lexie Flanagan, 16. Rehearsal of their parts Tuesday includes a few dance routines and youthful enthusiasm.

S. John Collins / Baker City HeraldYoungsters in the Circus Band group include Zayne Hills, 9, front center, Madi Cooper, 8, right, and plenty of other children, who are eager to perform their roles on stage.

S. John Collins / Baker City Herald“Jack and the Beanstalk” is the newest presentation of the Missoula Children’s Theater. Jack, left, is played by Henry Wood, 15, and Milky White, the cow to be sold for beans, is portrayed by Lexie Flanagan, 16. Rehearsal of their parts Tuesday includes a few dance routines and youthful enthusiasm.

Tatjana Moore knows how to work with kids.

She toured with Missoula Children’s Theater for two years, from 2013 to 2015.

After that, she taught preschool in Chicago.

She also performed a children’s puppet show at Chicago’s public libraries with Jake Moore — who became her husband.

Now she is back with MCT, touring “Jack and the Beanstalk” with her husband as her partner actor/director.

They are joined by Seth Hollen, an assistant for the show who will start his own tour in the Midwest and Northeastern United States in several weeks.

This week the trio is in Baker City working with 53 youth from ages 7 to 18 to create an entire musical in just five days.

It all began with auditions on Monday. By noon, all youngsters had their parts and a rehearsal schedule for the week.

Performances are 6 p.m. Friday and 3 p.m. Saturday at the Baker High School auditorium. Admission is $5, although all dads will be treated to free entry in honor of Father’s Day.

The community is welcome to attend. Admission helps ensure MCT comes back to the community again, a tradition now in its 10th season through Crossroads Carnegie Art Center.

“We want everybody to bring their friends and come see the show,” said Ginger Savage, Crossroads executive director.

This week’s show is sponsored by the Baker City Kiwanis Club, and supported by the Edna Harrell Fund, Herbert Templeton Foundation and Baker County Cultural Coalition.

“Jack and the Beanstalk” is based on the well-known fairy tale with Jack, a Giant, a harp, and magic beans.

However, as with every MCT production, it has a few twists.

All three actor/directors came to MCT from different backgrounds.

Tatjana grew up in theater, although it wasn’t always a happy experience.

“I was super painfully shy,” she said. “I’d cry through the entire audition.”

But she persevered, and graduated with a double major in theater and sociology.

And her past helps her when she sees 60-plus eager faces hoping for a part in the play.

“Who needs a win? Who needs this to be the best week of the summer?” she said. “I always look for the kids who want it the most, but are falling apart. I was that kid.”

Jake’s history with theater is more recent — he developed a children’s puppet company with a friend (the same gig where he met Tatjana).

It was during their puppet performances that Tatjana started thinking about Missoula Children’s Theater again, this time with her husband.

“When we started touring the puppet show, I thought ‘he could do this!’ ” she said.

Plus, they were ready for a new adventure.

“It was perfect timing,” she said. “We were ready to start new careers.”

They packed up their life in Chicago, went to Missoula, and this summer will tour “Jack and the Beanstalk” around Oregon, Washington, and northern Idaho from this week through early September.

Hollen has a musical theater degree, and also studied stage combat in college. He’s been with MCT for two years, touring in the Midwest, Canada and Asia.

Although most MCT camps in foreign countries are on military bases, Hollen spent a week in Japan where the musical was used as a second language class. The children were pre-cast two months in advance.

“We taught the show through translators,” he said. “It was really special — the entire town showed up.”

When they talk about their experiences with MCT, all three actor/directors speak most about the children they meet every week.

“I love it,” Tatjana said. “It’s fun to see them go from a little terrified to being really confident. They prove to themselves that they can do it.”

And many times, Hollen said, the children leave a lasting impression on their directors.

“The experience you have with kids who accomplish something is really special,” he said. “We see how we impact them, but the kids never know how they impact us.”

And through the week-long residency, they see kids grow.

“Every kid is in a different place, and every kid succeeds,” Tatjana said.

Missoula Children’s Theater will return in July and August. Space is available in both shows across all age groups.

Cost is $35 for Crossroads members or $55 for nonmembers. Scholarships are available.