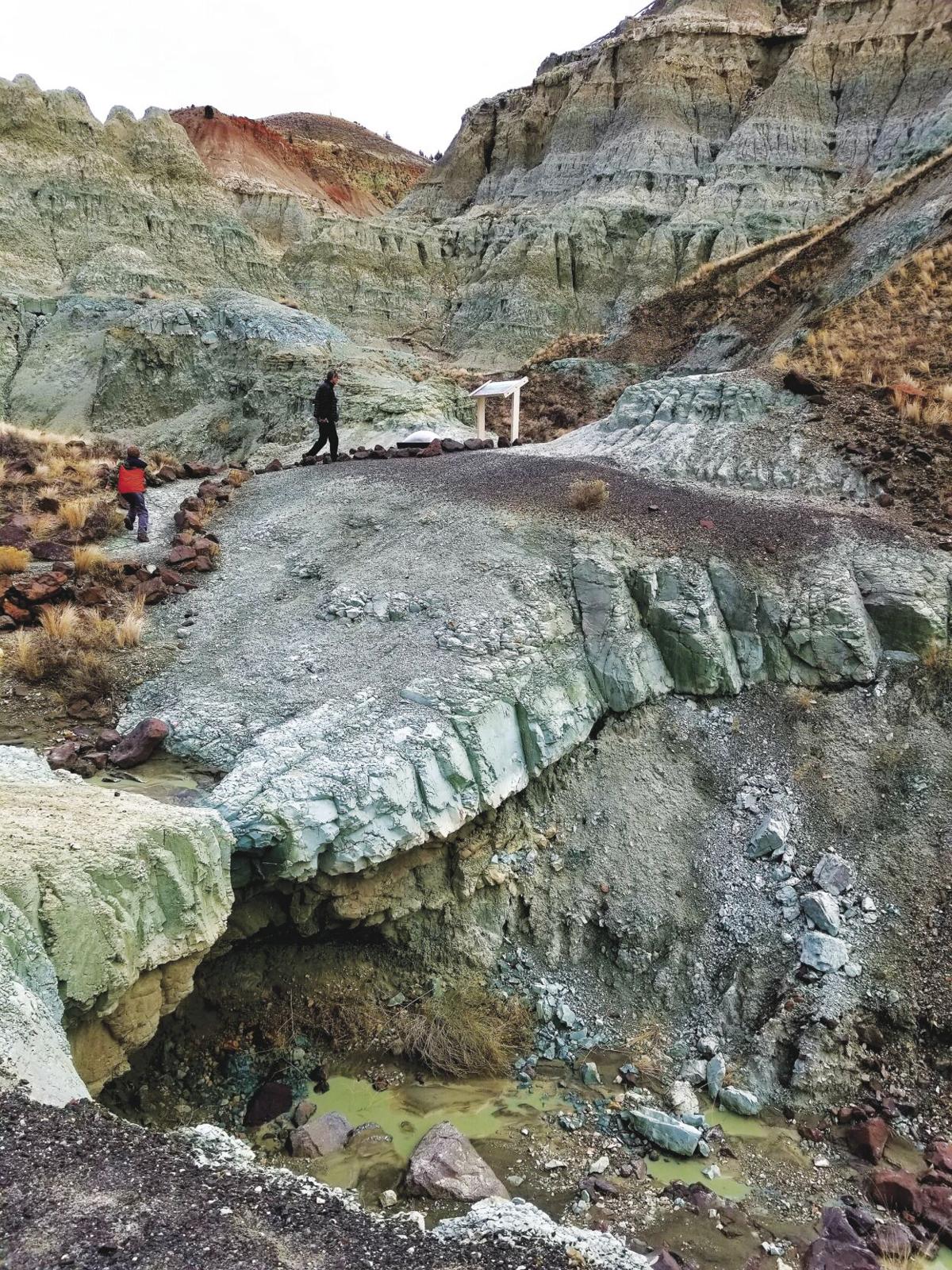 A trail through the heart of Blue Basin, in the John Day Fossil Beds National Monument, passes the bright hues of the volcanic ash beds that give the basin its name. 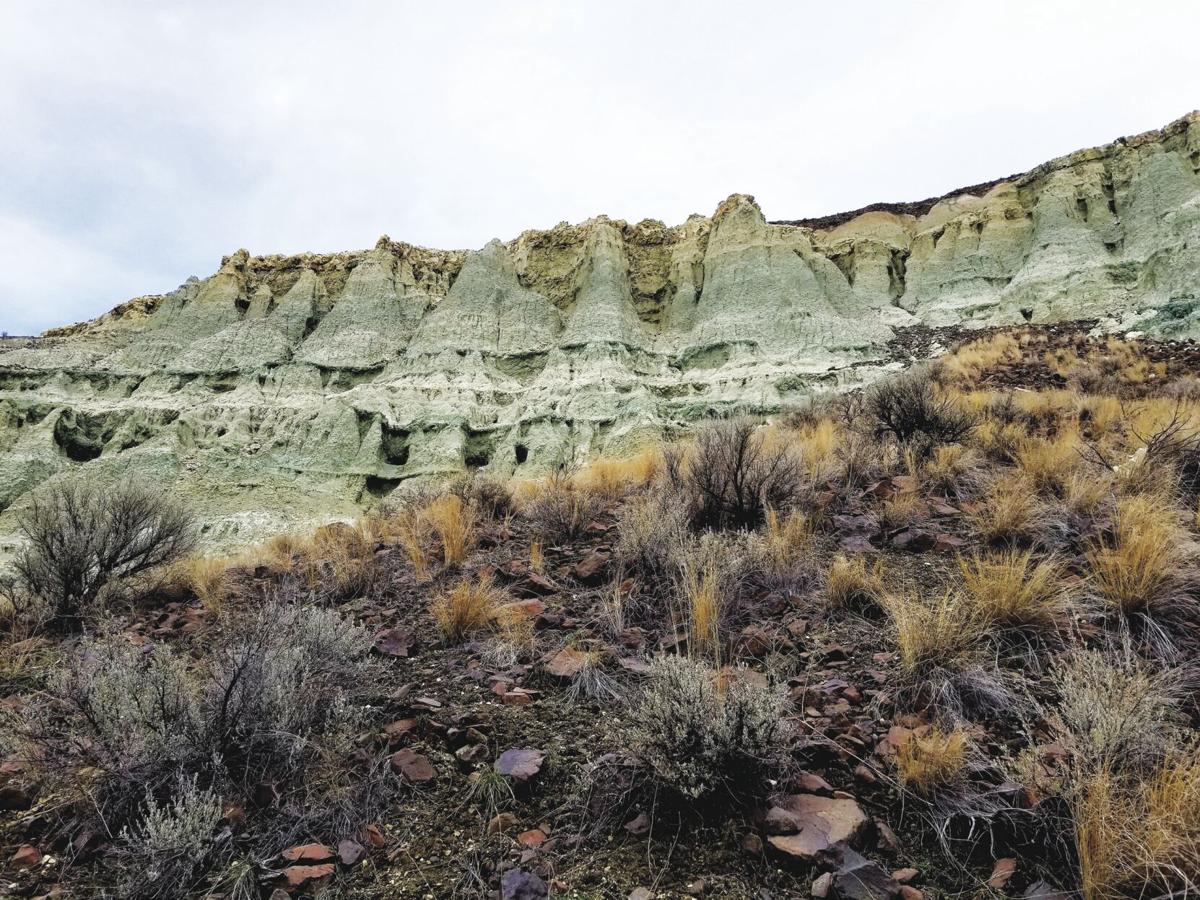 Water and wind erosion have sculpted the volcanic ash beds of the Blue Basin. 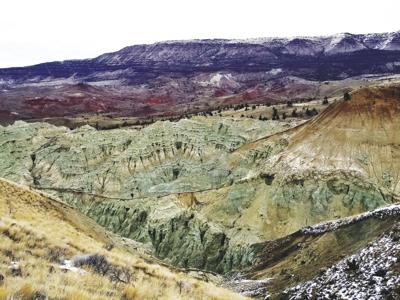 I like to read about geology, but the story of the ground beneath our feet is much more visceral when it’s smeared all over your clothes.

It’s one thing to learn about the Oligocene epoch.

It’s quite another to vacuum its remnants from your car’s floormats.

Few places in our region are better suited to both types of education — the clean lesson of the geology book and the messy experience of the muddy trail — than the John Day Fossil Beds.

This national monument, which is divided into three units spread across two counties, Grant and Wheeler, tells the tale of the animals that roamed and the plants that grew in this part of Oregon dating back about 50 million years.

The chapters of this story, as it were, are the fossils, both floral and faunal. They are preserved in rocks and ash flows that erupted from a series of volcanoes far to the west, eruptions that predated the current Cascade Mountains.

Paleontologists who have examined these fossils over the decades describe a land very different from what we see today.

Millions of years ago, before the Cascades rose and began to intercept most of the moisture from storms that swept in off the Pacific Ocean, this part of Eastern Oregon had a much wetter, more temperate climate than today’s arid sagebrush steppe with its scorching summers and chilly winters.

The wildlife was vastly different in the ancient past, as well.

These mammals were preyed on not by cougars and coyotes and bobcats, the primary predators these days, but by bear-dogs, pig-like entelodonts and cat-like nimravids.

It requires a rather expansive imagination to conjure such scenes while hiking through the fossil beds, even on a late January day when the ground is much more moist than usual.

No matter how soft and damp the soil during a midwinter thaw, the sharp scent of sage and juniper is redolent of desert rather than of savannah.

And instead of the varied forests of oak, sycamore and maple that prevailed here so many millennia distant, the vegetation today is sparse, and the dominant color the dull tan of dormant winter grass.

On the penultimate day of January we left Baker City and headed for the Sheep Rock unit of the John Day Fossil Beds. This unit is not only nearest our home — about 122 highway miles — but it includes the monument’s longest trail.

That’s the Blue Basin loop, which covers about 3 1/2 miles. Add the out-and-back trail into the heart of the basin itself — the most interesting part, geologically speaking, and the most photogenic — and you’ll end up covering close to 5 miles.

I told my wife, Lisa, and our kids, Olivia and Max, that although I couldn’t guarantee an absence of mud, I thought it possible that the trail would be in decent shape.

All three, having followed my crud-coated boots on other days, looked skeptical. Rightfully so.

The most direct route to Blue Basin is Highway 7 to Austin Junction, Highway 26 through Prairie City, John Day, Mount Vernon and Dayville to Picture Gorge, then north on Highway 19, beside the John Day River, for about 4 miles.

The paved parking area is just east of Highway 19.

Although the monument’s Thomas Condon Paleontology and Visitor Center is closed due to the pandemic, trails and other outdoor areas are open.

Many geology guides are too hefty to haul around while hiking.

An exception is the volume we brought, the second edition of “Hiking Oregon’s Geology” by Ellen Morris Bishop, a Wallowa County geologist, author and journalist who has written extensively about Oregon’s fascinating prehistory.

Bishop recommends hiking the Blue Basin loop clockwise, advice that’s especially appropriate when the trail, as it was on the day of our visit, is by turns slimed with grainy slush and gooey mud.

If your time or energy are limited, forego the loop itself and take the right-hand fork of the trail, the Island in Time path, which leads directly into Blue Basin itself.

The left fork of the loop skirts an alfalfa field then veers east, climbing at a consistent but moderate grade above the dry gorge of Dick Creek.

The strangely sculpted landscape on the right (south) side of the trail is compelling, a badland of spires and fissures where the erosive work of water and wind is obvious.

As is the origin of the basin’s name.

The distinctive color of this volcanic ash — to my eyes it’s closer to green or teal than to blue — comes from the mineral celadonite, according to the national monument’s website.

This formation, though formed from volcanic ash, has the consistency of stone, albeit soft, easily eroded stone. The heat from the eruption that produced the ash “welded” it into solidified layers, hence the term “welded ash tuff.”

In her guide, Bishop writes that these deposits were laid down during the Oligocene epoch, about 28.9 million years ago.

The basin is also known as Turtle Cove, as the fossils found in this area include many from ancient turtles.

The loop trail climbs a bit more steeply to its high point atop a knoll, where a side trail leads a few hundred yards to a viewpoint of the Blue Basin several hundred feet below.

The main trail then begins its descent to the basin itself.

The grade is gentle for the first half mile or so, but then it drops steeply, in a series of more than a dozen switchbacks, to meet the Island in Time trail near the parking lot.

Climbing, rather than descending, these switchbacks, given the slippery surface that prevailed during our hike, would have been a much less pleasant slog. We were glad we heeded Bishop’s suggestion.

We also enjoyed the vista from the loop trail, a much more expansive view than you get from within the convoluted confines of the basin.

The terrain hereabouts, near the boundary between Grant and Wheeler counties, is distinctive, a contorted landscape of buttes and ridges composed of the colorful beds of what geologists call the John Day formation. Most of the high ground is capped with a veneer of much harder, darker stone, like chocolate frosting topping a cake.

Generally, this top layer is a basalt flow, one of the hundreds of such flows that comprise the Columbia River flood basalts.

In the Picture Gorge area another distinctive formation, the Rattlesnake welded tuff, forms the geologic frosting.

The best view of the Rattlesnake tuff is at the Mascall Overlook, just off Highway 26 before it enters Picture Gorge.

The scenic highlight of Blue Basin, though — the place that’s likely to gobble the most megabytes on your camera — is the basin itself.

Some writers, Bishop among them, have described it as a “badlands.”

But the starkness that the word implies also can be beautiful — and unlike, say, the namesake badlands of a national park in South Dakota, the Blue Basin stands out for its color.

In places the shade is so bright it might fairly be called garish, although that adjective seems to me more appropriate for something man-made — the hue of paint slathered on kitchen appliances during the 1970s, for instance — than for a wholly natural formation.

Even the water in the sluggish meltwater stream that trickles through the basin takes on the distinctive tint.

Blue is the dominant, but not the only, color represented.

In places the ashy slopes are bands of red and ocher, resembling the well-known Painted Hills, the namesake of another of the national monument’s units, near Mitchell about 45 miles west.

Many of the myriad gullies that water has gouged into the ash are littered with chunks of basalt that have tumbled off the ridge top rim rock.

We even saw a minor example of the erosion that has sculpted this basin for millions of years, a brief slide of gravely debris, perhaps enough to fill a wheelbarrow or two, at the head of the basin.

It was a palpable reminder that the natural forces that created this place never end. I don’t believe I would feel comfortable standing there during a summer cloudburst.

Fortunately the Island in Time trail is graveled in places, and the brief walk back to the parking lot scuffed off much of the mud that had clung to our boots as we negotiated the switchbacks.

Rather than retrace our route to Baker City, I opted for another loop of sorts, going by way of Kimberly, Monument and Long Creek before returning to Highway 26 at Mount Vernon.

The detour adds perhaps an hour to the drive.

But I think the scenery, and the near absence of traffic save an occasional ranch truck, offsets the extra investment in time and mileage.

Highway 402, which connects Kimberly and Long Creek, with Monument between, follows the North Fork of the John Day River for about half its length. It’s a charming river in any season. In one of the bare brown fields, where the alfalfa awaits the reviving spring sunshine, we saw a herd of pronghorn antelope bedded down. I remarked that it was rare, at least in my experience, to see this most fleet of Eastern Oregon mammals sitting motionless.

Grant County, with just 7,360 people distributed among its 4,529 square miles, in no place resembles a metropolis.

But this northern section of the county seems to me especially remote. Monument, population 130, and Long Creek, with about 195 residents, boast the only street signs for dozens of miles.

Neither has, nor needs, a traffic signal.