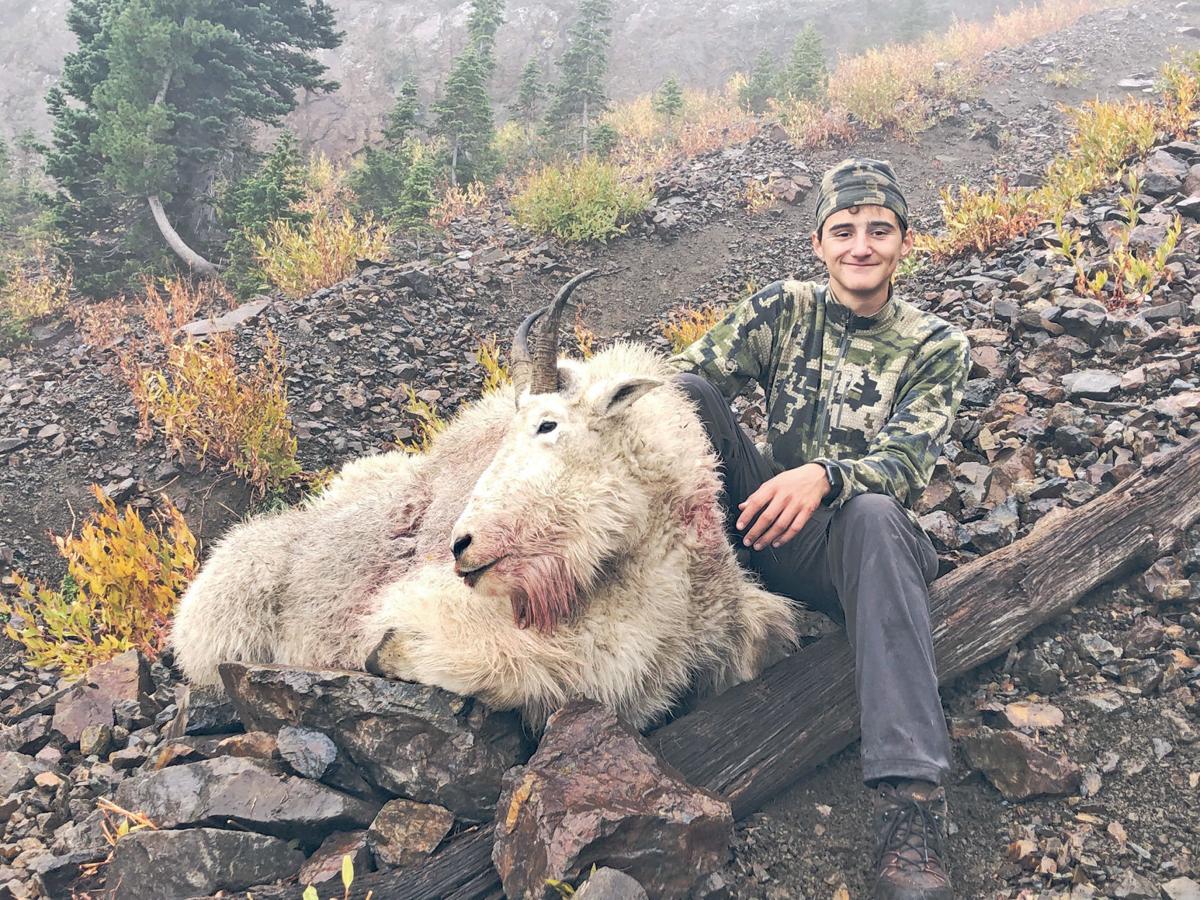 Fischer Schluessler with the billy goat he killed in September in the Elkhorn Mountains near Baker City. Schluessler, 14, traveled from his home near Detroit, Michigan, for the once-in-a-lifetime hunt. 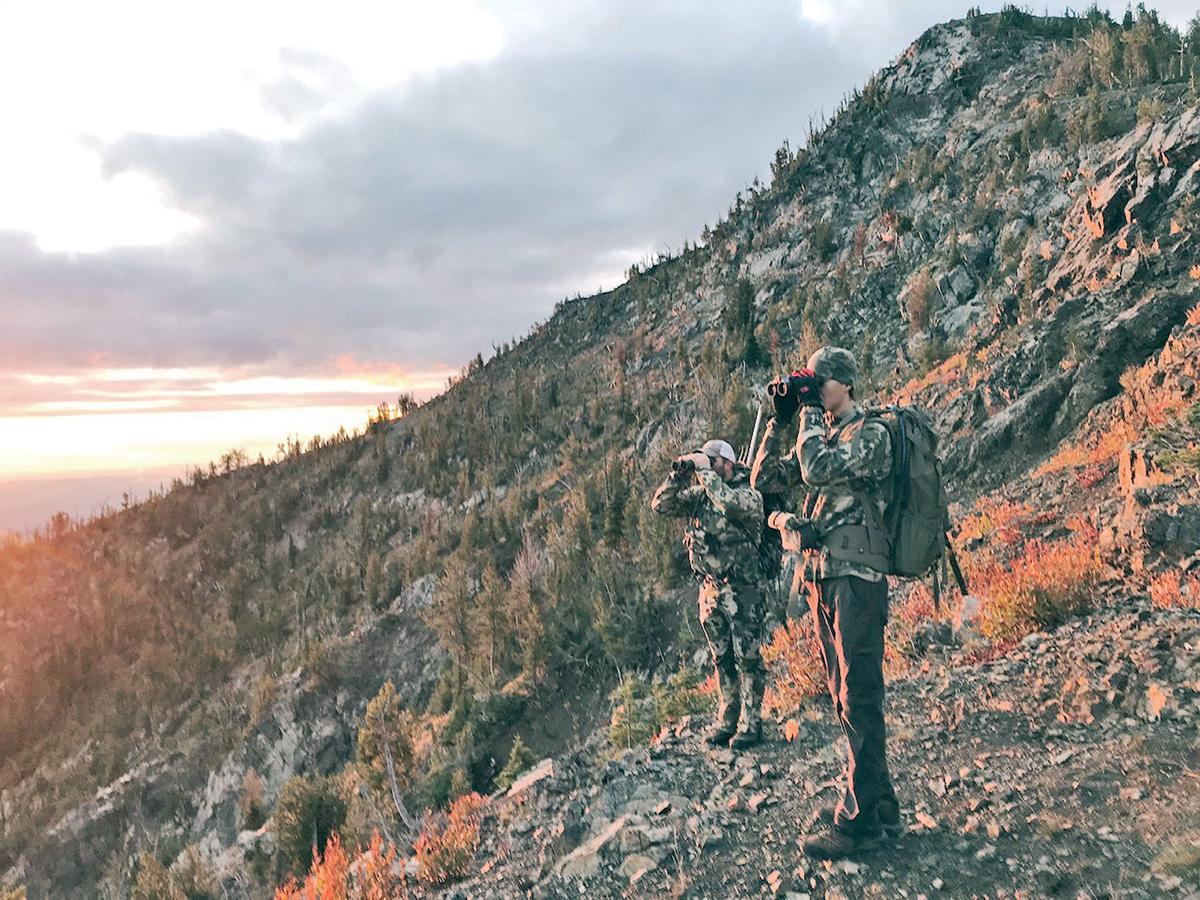 Fischer Schluessler, right, scans the steep slopes of the Elkhorn Mountains for goats along with one of his guides, Dusty McGrorty. 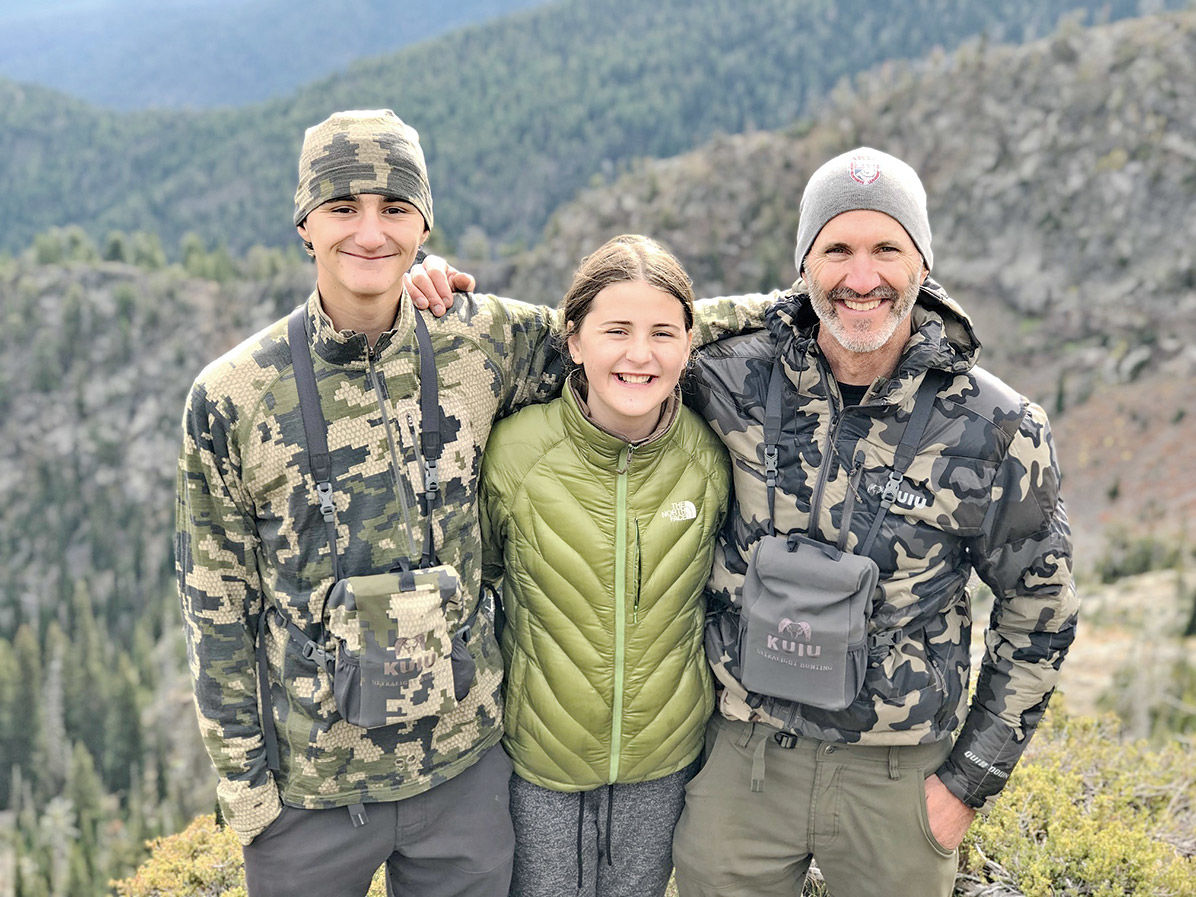 Fischer Schluessler’s mountain goat hunt was a family affair. He traveled to Baker County with his sister, Sage, and their father, John. John’s father, Harvey, also accompanied the group.

Fischer Schluessler with the billy goat he killed in September in the Elkhorn Mountains near Baker City. Schluessler, 14, traveled from his home near Detroit, Michigan, for the once-in-a-lifetime hunt.

Fischer Schluessler’s mountain goat hunt was a family affair. He traveled to Baker County with his sister, Sage, and their father, John. John’s father, Harvey, also accompanied the group.

Fischer Schluessler traveled most of the way across America to hunt mountain goats in Baker County.

And that was the easy part of the journey.

No rocky ridges to climb.

He’s hunted whitetail deer in the comparatively gentle terrain of his home state.

But going after cliff-dwelling goats in a towering range such as the Elkhorns, home to Oregon’s largest goat herd — well that is quite another matter.

“It’s a lot different from here,” said Fischer, who had a memorable, and successful, goat hunt in the Elkhorns in September. “I was surprised by how steep it was.”

Only a sliver of Baker County — in the northeast corner along the Snake River — is lower.

And the prime goat habitat mainly lies above 7,000 feet.

Fischer wasn’t devoid of experience among the great peaks of the West, however.

A family vacation this summer to the Tetons of Wyoming served as a sort of training trip.

The relative scarcity of oxygen in Baker County’s high country in no way detracted from the experience, said Fischer’s father, John Schluessler.

“It was beautiful,” John said of the hunt that culminated with Fischer bagging a trophy billy. “We just had a blast.”

The “we” in this case included not just father and son. Fischer’s sister, Sage, who’s 13, came along. And so did Harvey Schluessler — John’s father and Fischer and Sage’s grandpa.

“It was a great, positive experience for my family,” John said in a phone interview from Michigan. “It was everything I could have hoped for.”

Two of those were for non-Oregonians — and only one of those was for a hunt in the Elkhorns, where more than 350 goats gambol.

In 2018, the last year for which statistics are available, 834 non-residents applied for the hunt for which Fischer drew the tag this year.

Fischer, a high school sophomore, said he was excited — and surprised — when he learned this summer that Oregon’s computer tag lottery had plucked his name from its digital drum.

So was his dad.

“It’s such a rare opportunity to hunt mountain goats anywhere in the United States,” John said.

He said he decided to have Fischer apply for an Oregon tag after learning through a hunting magazine that the state charges just $5 for non-resident youths to apply.

The legacy of goat hunting in the Elkhorns was an added incentive, John said.

“There’s such a thriving goat population up there,” he said.

Three of the top 10 mountain goats taken by rifle hunters in Oregon were bagged in the Elkhorns, along with the top four harvested by archers.

John said that although he has been to Idaho several times, Fischer’s goat hunt marked the family’s first visit to Oregon.

John said he hired D-Mac Outfitters to guide the hunt. Although the company is based in Riddle, in Southwestern Oregon, owner Dusty McGrorty employs Lukas Huggins of Baker City for goat hunts in the Elkhorns.

(More about the connection between McGrorty and the Huggins family later.)

The Schluesslers and their guides started by driving to Marble Creek Pass, elevation 7,542, the southern terminus of the Elkhorn Crest Trail.

Fischer said the steep, boulder-strewn road, which in places more resembles a dry stream bed, is nothing like the forest roads he’s accustomed to.

“We had a flat tire the first day, so I learned how to change a tire,” he said.

After hiking north on the Crest Trail the group saw a group of goats in a basin far below. They focused on a particular billy.

Fischer took a long shot with his 7 mm rifle and although everyone thought he had hit the goat, the billy disappeared.

Then a dense fog set in.

The group started a 2,000-foot climb back up the ridge.

When the fog briefly cleared they saw another billy and, soon after, the same billy Fischer had fired at.

This time Fischer brought the goat down, although, as hunters before him have discovered, it wasn’t easy.

Mountain goats are famously stout, and Fischer put three rounds into the animal before it dropped.

When they reached the animal they saw that Fischer’s first bullet had indeed grazed the billy.

The goat also had a much older scar above its right eye, and appeared blind in that eye.

John said the billy’s green score of 51 3/4 ranks second among youth hunters in Oregon and, for that matter, in the lower 48 states.

At the top of that list, with a billy that officially scored 51 6/8, is Matea Huggins of Baker City. She killed the billy in 2009 when she was a 12-year-old seventh-grader.

She bagged her billy three years before McGrorty, hunting with a bow, harvested the Oregon state record (for archery) goat in the Elkhorns.

McGrorty said he was scouting in the Elkhorns in July 2012, and camped right on the Elkhorn Crest Trail, when one morning he saw a man hiking toward him.

The man was Ed Huggins — Matea’s and Lukas’ dad.

McGrorty, who said he recognized the last name, having read about Matea’s 2009 hunt, said the Hugginses’ helped him with his 2012 hunt.

That experience solidified McGrorty’s affinity not only for mountain goats but also for the Elkhorns.

And when he started guiding hunts there he turned to Lukas Huggins, who had become a good friend.

McGrorty said last month’s hunt with the Schluessler family was “an awesome hunt.”

“It was just a super experience for my family,” he said. “Just fantastic.”

John said he was enamored with the Elkhorns, with Oregon and with the expanses of public land open to hunting.

“I think we’re all just blessed to have this plethora of public land for everybody to use,” he said.

He was also impressed by the hospitality of everyone his family met, including biologists from the Oregon Department of Fish and Wildlife’s Baker City office.

“Everybody was super helpful,” he said.

As for Fischer, his first, and only, mountain goat hunt in Oregon will be hard to top.

“It was really tiring, but that just made it that much better,” he said. “I’ll remember this forever.”

“It was really tiring, but that just made it that much better. I’ll remember this forever.”