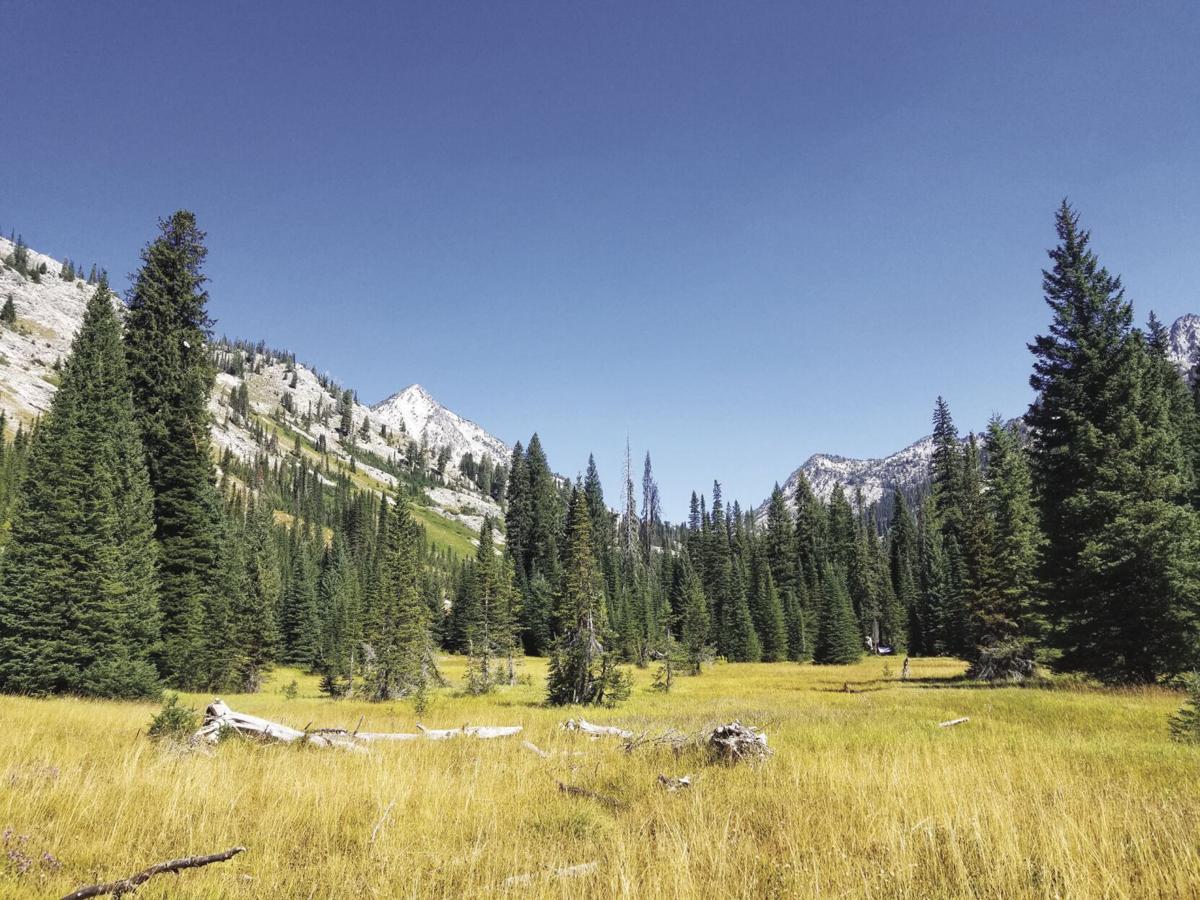 The alpine meadow along Eagle Creek is a classic mountain field, with tawny grass, thickets of spire-shaped subalpine firs, and a backdrop of the granitic peaks of the Eagle Cap Wilderness. The tallest summit in the area, in the middle left of the photo, is Needle Point, elevation 9,018 feet. 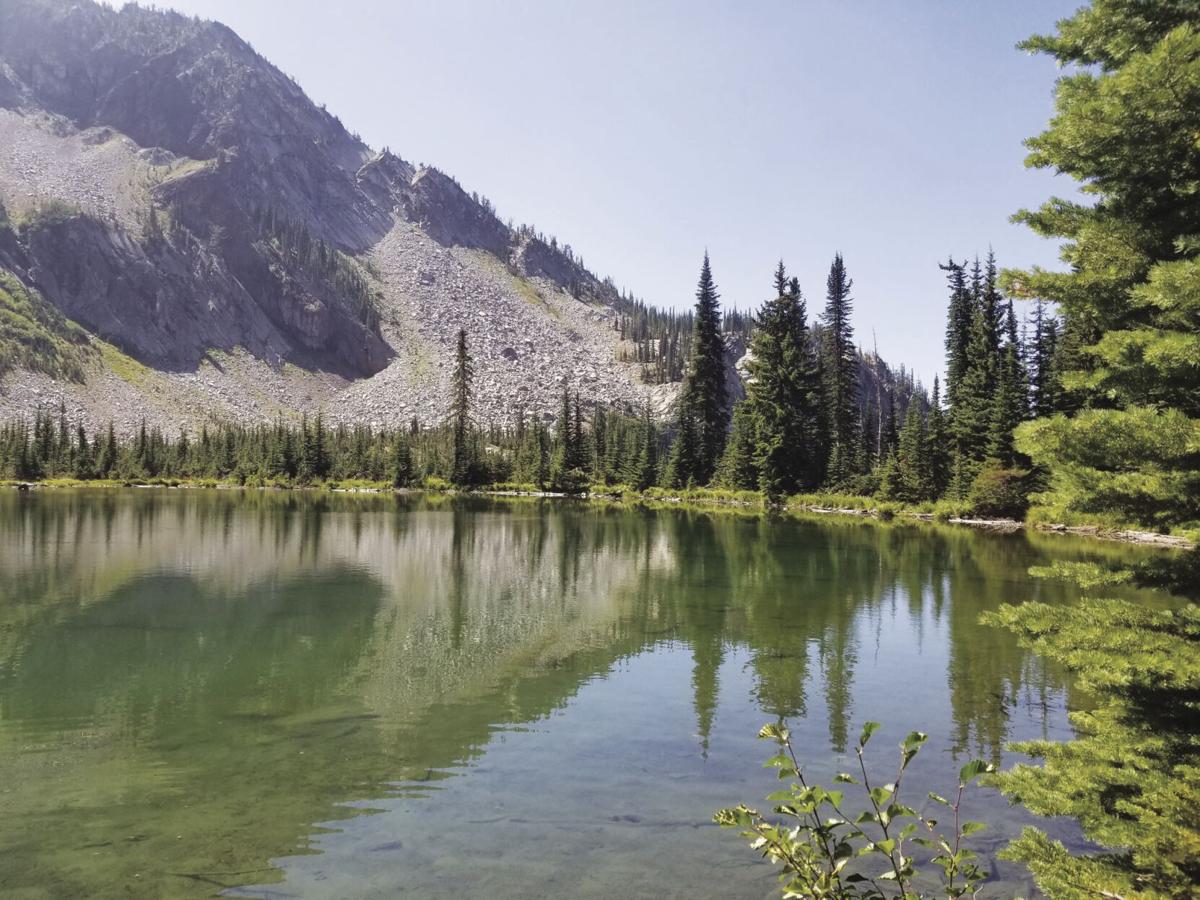 Culver Lake, on the east side of the Eagle Creek Canyon. 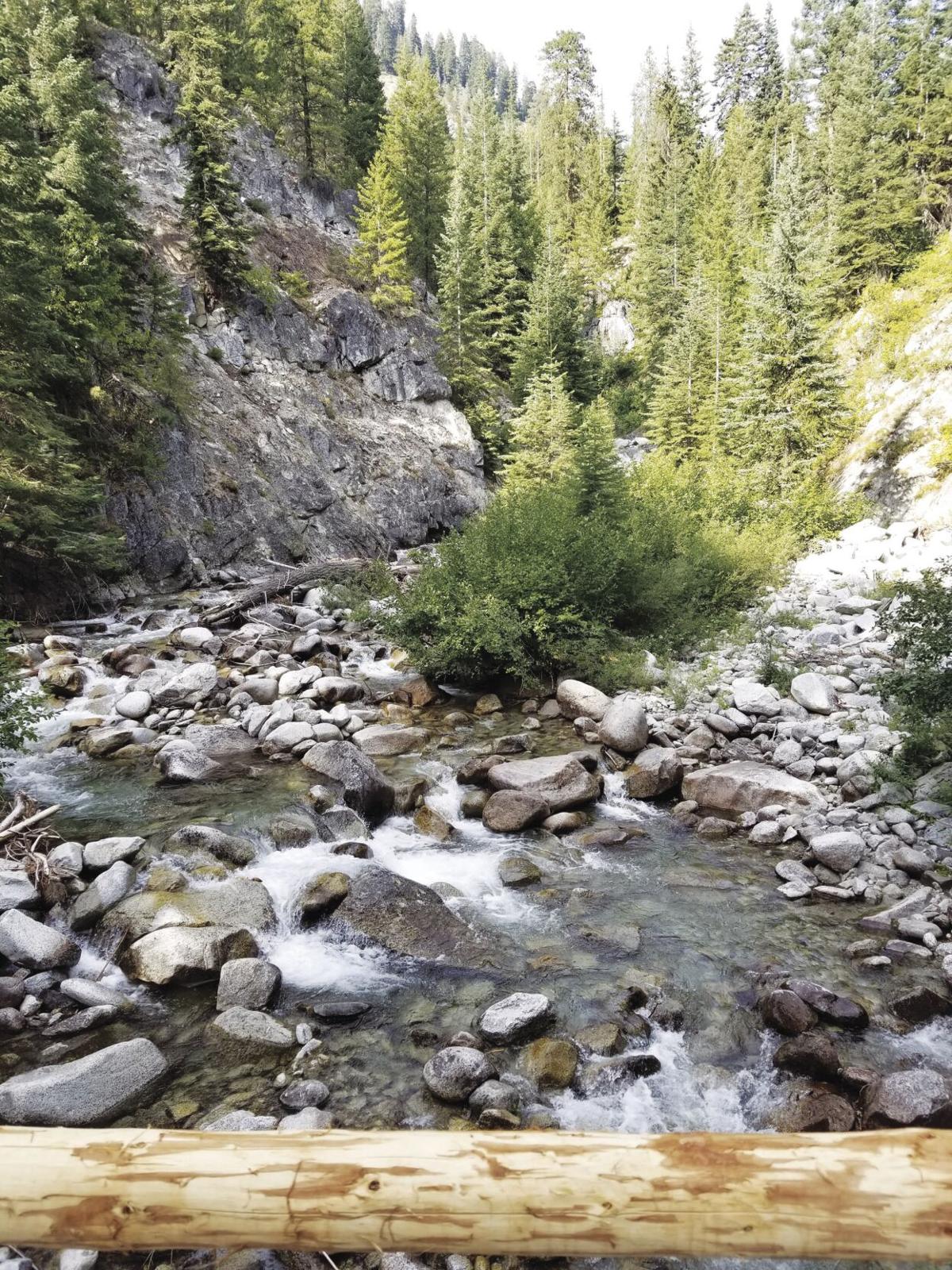 Eagle Creek tumbles down its canyon in the Wallowa Mountains. 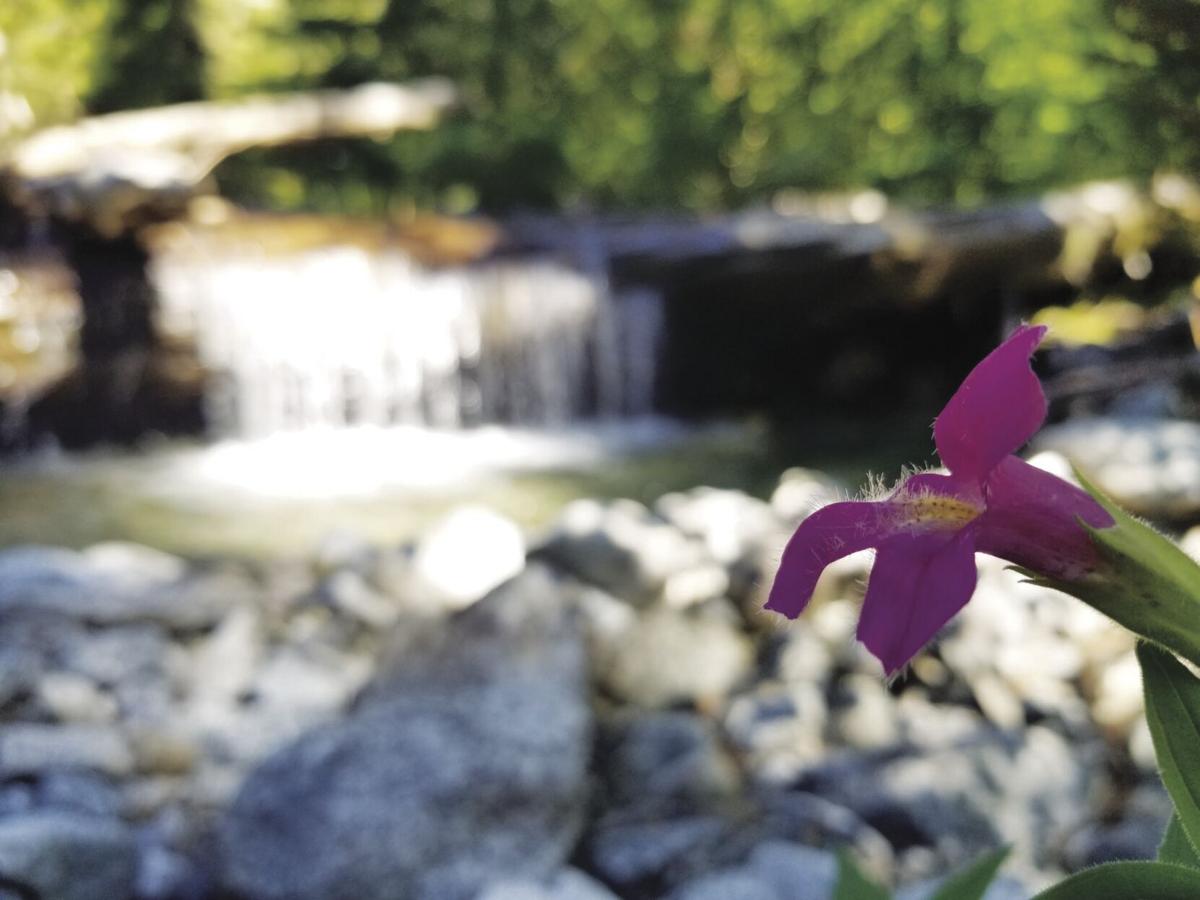 A pink monkeyflower blooms along Copper Creek, a tributary of Eagle Creek in the Wallowa Mountains.

It wasn’t exactly larceny, what happened beside the limpid stream in the Eagle Cap Wilderness the afternoon of Aug. 29.

Nor do I want to give the impression that Eagle Creek was entirely to blame in the incident which left my corneas unprotected on a nearly cloudless day.

The creek, which in late summer is pretty placid, didn’t conjure a rogue wave that plucked the glasses from my face.

Indeed I wasn’t even wearing them.

Which was part of the problem.

It could have been a worse predicament, to be sure.

We were on the homeward leg of a nearly 14-mile round-trip hike to Culver Lake, with a little more than 5 miles to go, much of the distance on a trail through the deep and pleasantly shaded woods.

I knew the tamaracks and the Douglas-firs and the Engelmann spruce, some of which in this unlogged area tower over 100 feet, would shelter my eyes.

But I was still irked about losing the glasses, which I have worn, quite happily, for several years. As can happen with a shirt or other garment that fits perfectly, I had gotten so accustomed to the sunglasses that I scarcely noticed them.

Which has much to do with why I no longer have them.

We paused beside Eagle Creek to filter water to replenish the two drained bottles in my pack.

It was shady there so I took off the sunglasses and tucked one earpiece into the neck of my T-shirt.

This is not a particular secure tactic, especially when the T-shirt has a loose fit.

I knelt on the streambank and filled the bag that attaches to the filter.

Once the bottles were filled with the refreshingly chilly water I zipped my pack and slung it over my shoulder.

Then I reached for my sunglasses, a gesture so common it’s all but subconscious.

My fingers grasped only cotton.

I knew immediately, in the way you do when you’ve lost something, what had happened.

In my penitent pose the glasses had escaped the dubious grasp of my shirt, and as I concentrated on dipping the bag into the flow I didn’t notice.

By the time I realized this, about 5 minutes had elapsed.

Which, given even the relatively modest pace of Eagle Creek as it tumbles along its bed of granitic boulders, was plenty of time to flush the sunglasses a fair distance.

I don’t believe they are especially buoyant, as eyewear goes.

But they also had no more mass than a slender twig, and the stream was clearly capable of propelling that sort of flotsam.

I was pretty sure, in any case, that the glasses were good and gone.

Nonetheless I spent 10 minutes or so peering into eddies and checking riffles. My daughter, Olivia, and son, Max, walked downstream a few hundred yards but their search was as fruitless as mine.

I was reluctant to give up, but I knew that if the glasses had snagged on a branch or fetched up against a rock, the white frame and earpieces ought to have been conspicuous.

But I harbor no grudge against Eagle Creek.

It is a difficult stream to dislike, in any case.

Indeed I’ve long had a particular affinity for Eagle Creek, in part because its status as a “creek” implies that it is a lesser feature than a river.

This is decidedly not so.

I think Eagle Creek deserves the title of “river” as much as the Lostine, the Wallowa, the Minam and the Imnaha do, to cite four whose headwaters are also high in the Wallowas.

(I also believe certain other streams, creeks all rather than rivers, are similarly disrespected, including Catherine, Hurricane, Pine and Bear.)

The canyon that an Ice Age glacier and then Eagle Creek have carved through the Wallowas is a place of great beauty, no matter the diminutive nomenclature.

My wife, Lisa, and I had both hiked to the meadow about 5 miles upstream from the Main Eagle trailhead at Boulder Park.

But we wanted to introduce Max and Olivia to one of the grand alpine fields in the Eagle Cap Wilderness. We camped at Two Color, a couple miles down the road, and started up the trail Saturday morning.

I enjoy the path for its variety. The Main Eagle trail boasts most of the attributes that beckon people to the Wallowas — dense forests and slopes spangled with wildflowers and rivulets of chilly spring water that even short legs can hop across.

(Not that feet necessarily remain dry, of course.)

At about 3 miles the trail crosses Copper Creek, which plunges over a waterfall just west of the trail. You can see part of the falls from the trail but you’ll have to bushwhack a short distance to get a full view.

The Eagle Creek canyon is mostly granitic rock, the whitish stone that at times seems to reflect the sun as dazzlingly as snow.

(This feature isn’t quite so fetching after you’ve lost your sunglasses.)

The light-colored slopes, as is the case in much of the Wallowas, are striped in places by the dark brown slashes of basalt. These are remnants of the vents that conveyed incredible volumes of soupy lava to the surface, where it flowed west, in some cases reaching the Pacific Ocean. The Wallowas were a main source of the Columbia River flood basalts, which erupted between about 15 million and 17 million years ago.

The glacier that carved the ancestral Eagle Creek canyon extended for about 13 miles, according to a paper by John E. Allen, emeritus professor of geology at Portland State University, published in 1975 in the magazine of the Oregon Department of Geology and Mineral Industries.

Allen wrote that the Eagle Creek glacier was one of nine in the Wallowas that exceeded 10 miles in length.

The point at which the trail emerges from the forest onto a bouldery slope above Main Eagle Meadow is among the more stirring sights in the Wallowas.

Some people no doubt find this scene most beautiful in early summer, when the grass is green. But I prefer late summer or fall, when the grass has turned tawny, making a more compelling contrast with the green-black of the slender spires of the subalpine firs.

The imposing peak at the head of the valley is Needle Point. The 9,018-foot summit, tallest in the Eagle Creek drainage, is aptly named.

We stopped at Eagle Creek, which I presumed was our turnaround point.

But then we got to talking about going on, as hikers are apt to do when other glorious destinations lie just over a nearby ridge.

I had never forded the creek here and climbed the steep slope to the basins that hold a trio of lakes, Culver, Bear and Lookingglass.

But Lisa had made the hike, and she spoke highly of Culver.

The kids were game so we sallied onward.

We were amply rewarded for the extra effort, as is usual in the Eagle Cap Wilderness.

Culver Lake is perhaps not so spectacular as, say, Ice or Glacier lakes. But this is rather like saying that most of the other Alps aren’t as dramatic as the Matterhorn.

Culver was as pleasant a place as I would hope to spend a half hour on a brilliant August afternoon.

Max and Olivia took a dip in its frigid water. We watched brook trout patrol. There was a big frog that enchanted the kids. And except for the occasional splash there was the awesome silence of the wilderness, a refreshing balm with no rival.

I felt as perfectly at ease as a cat in a shaft of sunshine.

And my sunglasses were safely perched on the bridge of my nose, neither of us recognizing how little time we had left together.

The Eagle Creek trail starts at the Main Eagle trailhead at Boulder Park, the former site of a rustic resort at the end of Forest Road 7755. If you’re coming from the north through La Grande, drive to Union and follow Highway 203, the Medical Springs Highway, past Catherine Creek State Park. Two main forest roads lead to Eagle Creek — Road 77 starts at Catherine Creek Summit, and Road 67 starts at Medical Springs. If you don’t have a Northwest Forest Pass you’ll need to pay a $5 fee to parking at the trailhead.