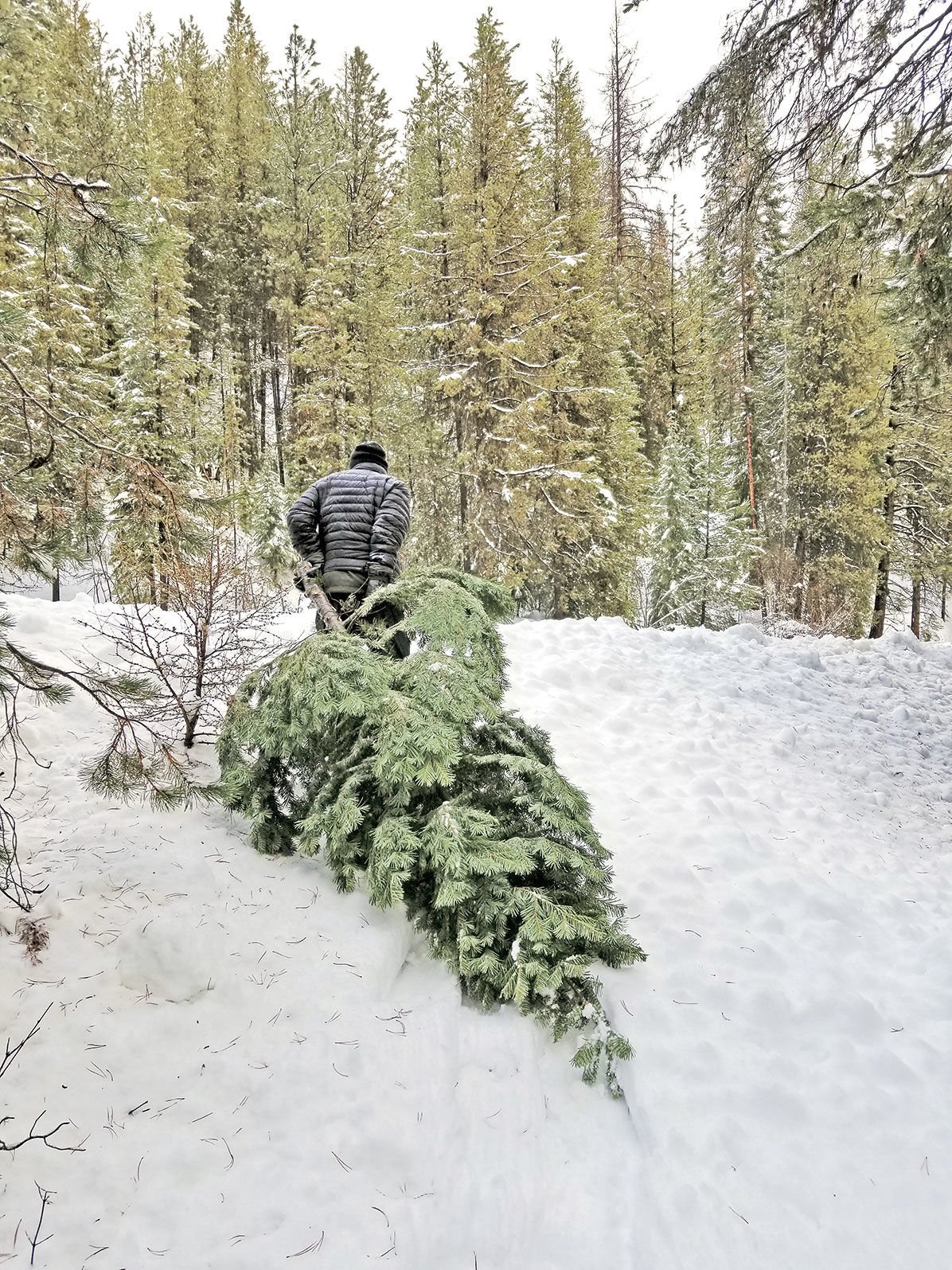 Almost there — hauling the tree up the final slope to the road. 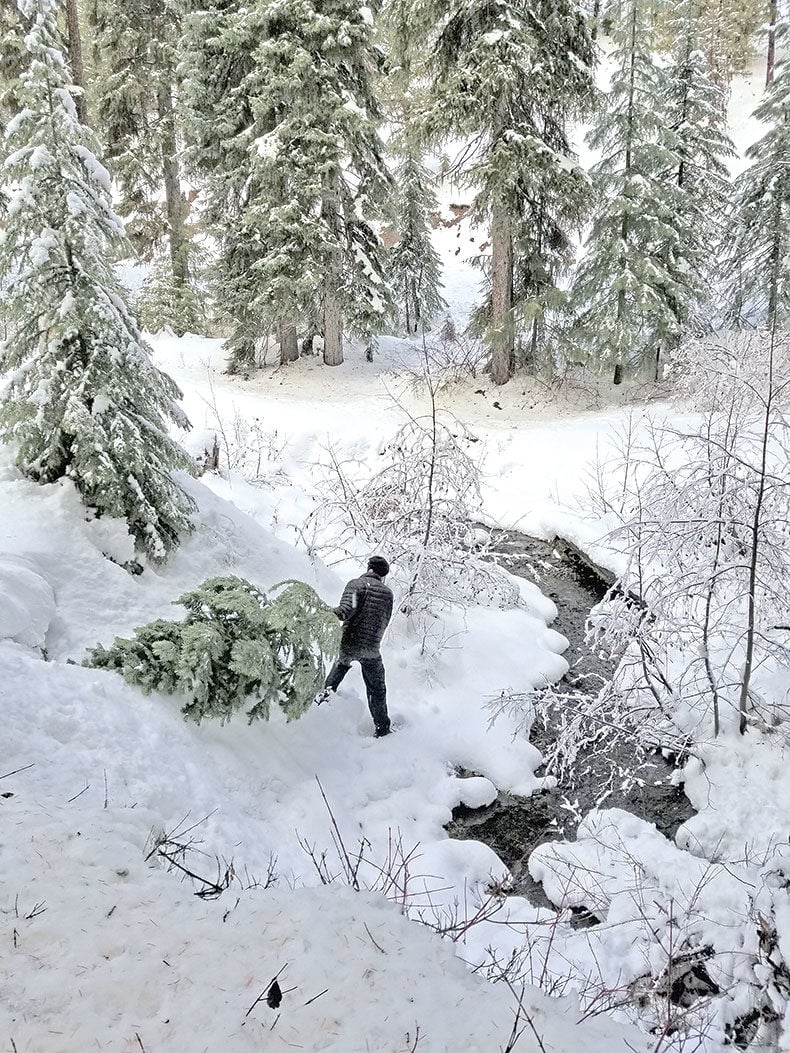 Crossing a mountain stream in snowshoes can be a challenge even when you’re not dragging a 7-foot-tall grand fir. 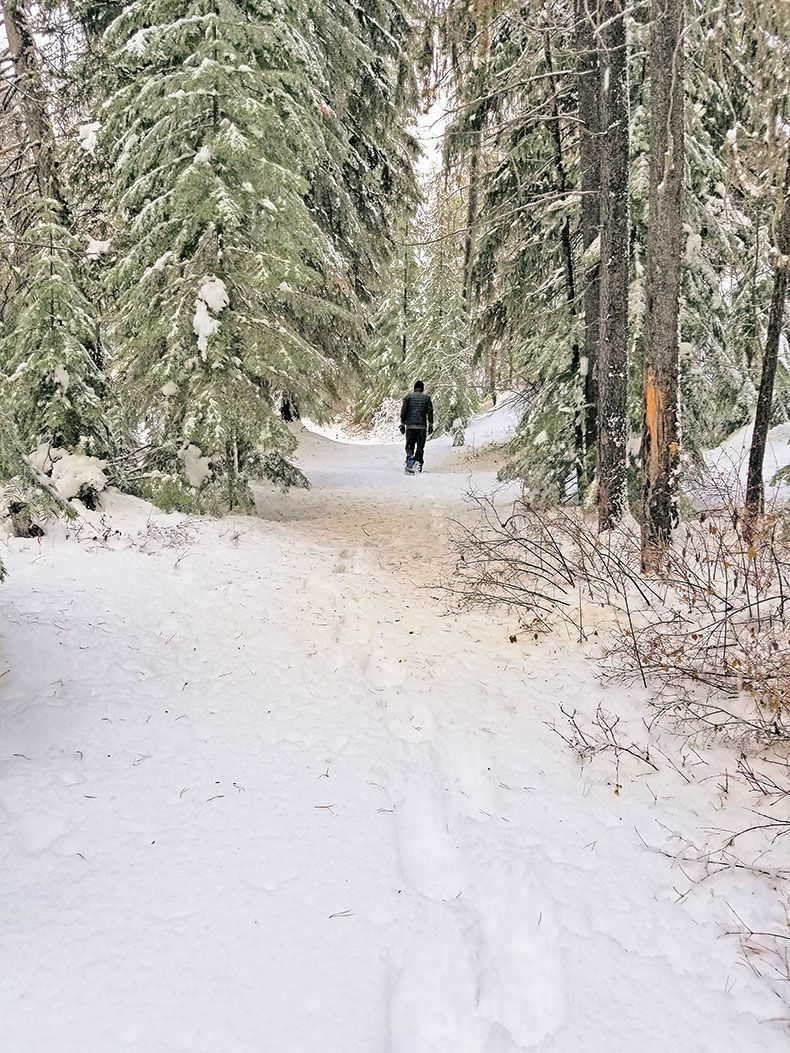 Almost there — hauling the tree up the final slope to the road.

Crossing a mountain stream in snowshoes can be a challenge even when you’re not dragging a 7-foot-tall grand fir.

A Christmas tree is an enchanting sight both when it’s standing in a snowy glen in the deep woods and later, when its aromatic and ornament-laden branches enrich your living room.

In between, though, it’s a most hateful object.

One as obstinate as an inanimate thing can be.

A grand fir that’s not much taller than I am — this in deference to the modest height of our ceiling — does not wish to be dragged from its stump to the road.

In particular the tree does not wish to be tumbled down a slope steep enough that it ought to have a black diamond sign, wrestled across an ice-fringed stream and manhandled up the bank on the other side.

My wife, Lisa, and I drove up above Sumpter on Sunday on a quest for the fir that will grace our home for the next few weeks.

(I suppose it was not inevitable that we would return with a fir strapped to the top of the rig, as opposed to some other species, but I was all but certain, based on more than two decades of collecting Christmas trees, that fir needles would be the sort littering the floormats. Our other options include the Engelmann spruce, which can be attractive but is betrayed by its prickly needles, and lodgepole and ponderosa pines, neither of which tends to be especially shapely. As for tamaracks, the deciduous conifer, it’s ideal only if you’re trying to replicate the forlorn tree Charlie Brown rescued from the lot.)

We strapped on snowshoes, scrambled up the berm lining the Sumpter-Granite Highway, and headed toward Buck Gulch.

Over about 25 years of going after my own Christmas tree in the Blue Mountains I’ve concluded that the most fruitful sites are what you might call Goldilocks spots — where the tree density is neither heavy nor sparse.

When trees grow in clumps, as grand fir often do, especially on cooler, damper north- or east-facing slopes, it’s rare to find a specimen that doesn’t have at least one side with puny branches due to interference from its multiple neighbors.

South slopes, by contrast, often are dominated by mature trees that wouldn’t fit in my front yard, much less in my living room.

The ridge just south of Buck Gulch is rather steeper than I prefer, since trees that get a roothold in precipitous places tend to have trunks that are out of plumb.

But we hadn’t climbed more than a couple hundred vertical feet when Lisa spotted a likely candidate down in a shallow defile. It was a fine grand fir, with the rich green needles typical of the species, and it was approximately the right height.

Although I’m prone to the compulsion to keep looking, under the dubious belief that a much better tree is just over the brow of the next ridge, we decided this fir was a keeper.

I pulled out my folding saw and hunkered down — which for me, when clad in snowshoes, would better be described as a barely controlled fall.

The trunk was just a few inches across but sawing through it required much more effort than it should have owing to my failure to ever sharpen the saw’s teeth.

Eventually, with Lisa pushing from the uphill side, we toppled the fir.

The slope below was steep enough, and the snow relatively firm after a week of settling following the Thanksgiving weekend storms, that I figured the tree would pretty much find its own way, at least until the grade eased.

It turned out that the tree was no more inclined to tumble along than is a freshly butchered elk front quarter.

As I wrestled with the fir, trying to avoid smearing pitch on my down jacket, I was recalling an episode a little more than a year ago when I helped haul out the bull elk that Lisa’s nephew, Tyler, killed near the Snake River.

There was a similarity to the sense of drudgery in both cases. The elk was heavier, of course, but the fir compensated for its modest mass with sheer friction. Also I couldn’t hoist it on my shoulder, as with the chunk of elk.

But even as I felt the sweat beading on my back and my brow, I would get an occasional whiff of the fir. And I would imagine how pleasant it was going to be, in the days leading to Christmas, to come home in the cold dark, walk past the window and see its lights glittering against the snow.