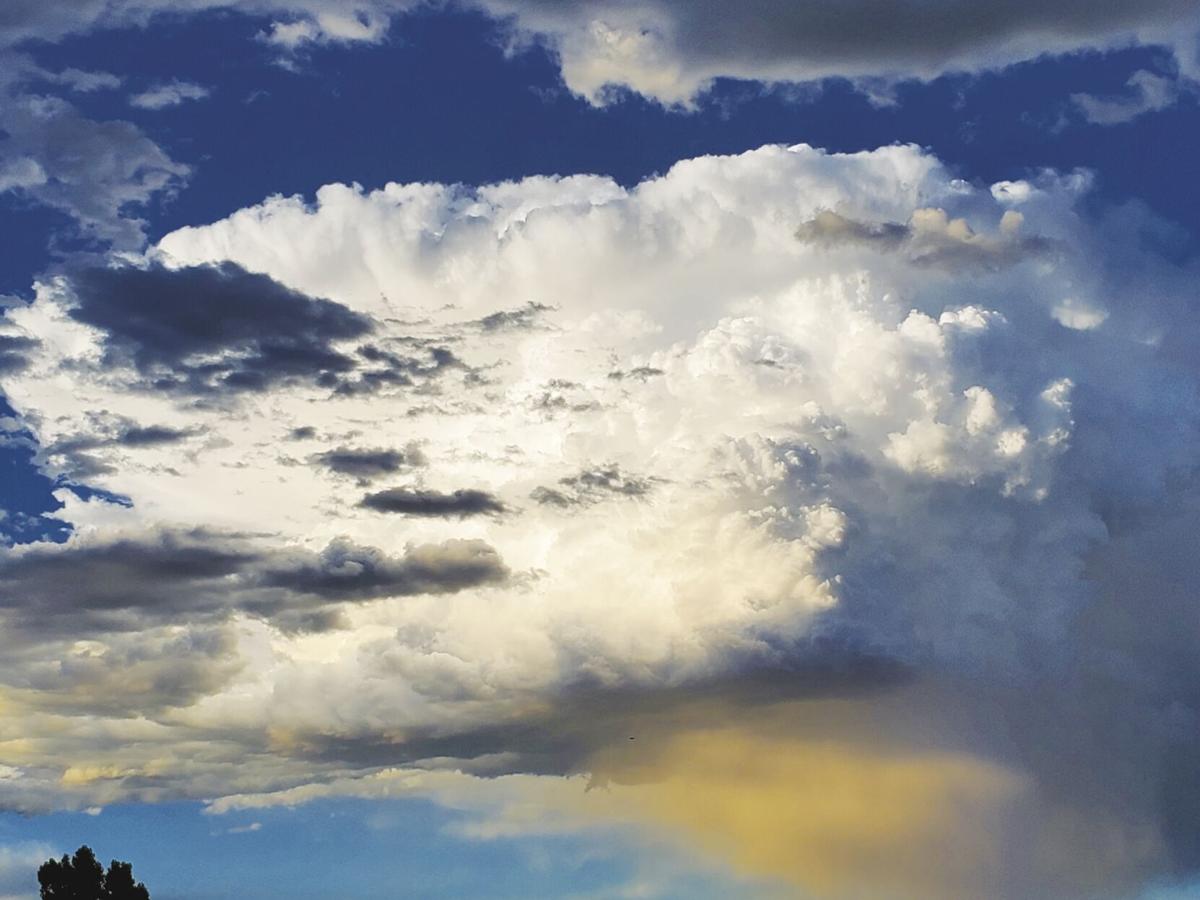 A cumulonimbus cloud looms over Baker Valley on June 13, 2021. 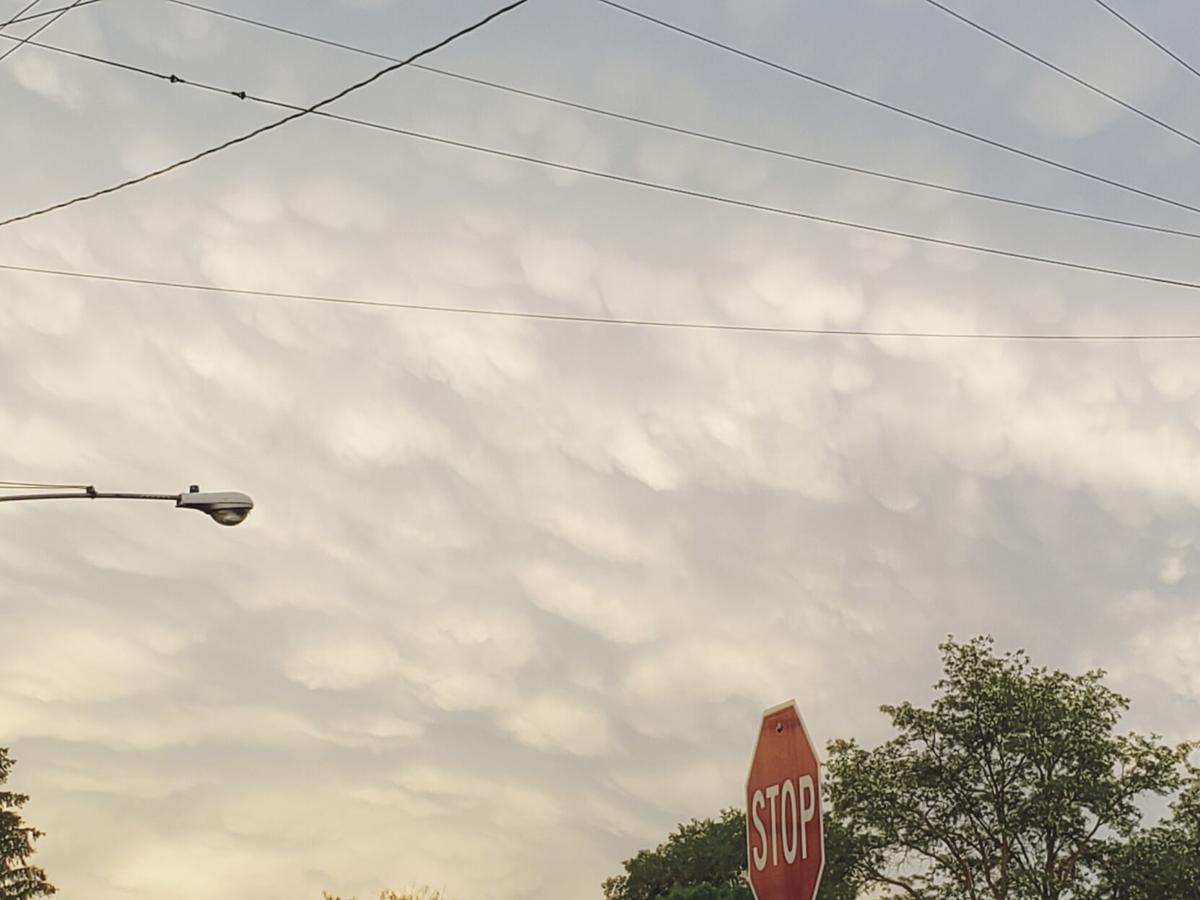 A cumulonimbus cloud looms over Baker Valley on June 13, 2021.

The first drop of rain plunked the sidewalk with a splat I could hear despite the two earbuds jutting from the sides of my head, the plastic appendages of the urban pedestrian addicted to podcasts.

The drop left a dark damp spot about the size of a quarter on the concrete.

Raindrops rarely travel alone, of course, and within 15 seconds the sidewalk was stippled with dozens of similar spots, the effect rather like a time-lapse series of photos of measles speckling somebody’s torso.

My light-gray T-shirt quickly turned dark-gray, the clammy cotton clinging to my skin.

It was refreshing, though, as welcome as a cool breeze wafting through a window at the close of a hot day, which this day was. A few blocks farther on I heard thunder off to the west, where the hazy veil of rain had partially obscured the Elkhorns.

This thunderstorm that swept through Baker City on June 14 wasn’t the season’s first.

But it was the first tempest that coincided with my daily walk, normally an afternoon excursion that I put off until evening in deference to the 90-degree heat.

My affinity isn’t absolute, only because storms sometimes ignite wildfires that become devastating infernos, or spawn crop-pounding hail, or, much more rarely, a deadly bolt of lightning.

But among meteorological phenomena, the thunderstorm is one of my favorites.

I find eternally fascinating the physics of storms, the combination of factors that sometimes coalesce to fuel the atmospheric combustion which exists within a cumulonimbus cloud.

It intrigues me that, in many cases, the storms which often enliven summer afternoons and evenings in Northeastern Oregon were born, as it were, dozens or even hundreds of miles away, in the sagebrush desert of the state’s southeast corner.

I relish the sense of anticipation that attends the onset of a storm, the way a sunny morning yields first to a smattering of cumulus, and, as the hours pass, to a dark curtain of cloud.

The first distant murmur of thunder, a sound that must be similar to what soldiers heard as they marched toward the front at the Somme or Verdun.

The way the air feels in the minutes before a storm arrives, as if the invisible molecules themselves have taken on weight.

Storms appeal to me in part, I’m sure, because I rarely saw any until I moved most of the way across Oregon three decades ago.

I grew up near Salem. Thunderstorms were so infrequent that I recall the few occasions when my family gathered to watch lightning.

(Told as a tot about “sheet” lightning — which is not a special sort of lightning but merely lightning inside a cloud rather than a bolt that strikes the ground — I coined the term “bed lightning.”)

Although my understanding of scientific principles hasn’t progressed much since my “bed lightning” childhood, I have gained a basic concept of the forces at work, thanks in part to recent conversations I had with Jay Breidenbach, the warning coordination meteorologist at the National Weather Service office in Boise, and Brandon Lawhorn, a forecaster at the Weather Service office in Pendleton.

The essential ingredient in brewing storms is an atmosphere in which air is likely to start rising, and to keep rising many thousands of feet above the ground.

There are multiple triggers, but the most common around here is simple summer sunshine heating the ground and, by radiation, the air just above it.

Warm air is less dense — it’s no coincidence that people fly in hot-air balloons, not cold-air balloons — so it tends to rise.

This warmed air — what meteorologists call a “parcel” of air — will keep climbing so long as it’s warmer than the surrounding atmosphere. But as anyone who has climbed a mountain knows, air generally cools as it rises.

The second crucial component is moisture — the amount of invisible water vapor in the air.

Our area is known for its dry climate, of course — the “dry” heat that is compared, usually favorably in terms of comfort, with the sweat-inducing humidity of the Midwest and the South.

Moisture, like heat, makes air less dense (or more buoyant, if you prefer that concept). But moisture also has two other effects, both of which help storms to form. In both cases the vital process is condensation — when water vapor transforms to liquid.

(What we call clouds.)

Because the capacity of air to hold moisture in vapor form decreases along with temperature, rising air, even if it stays warmer than the surrounding atmosphere and thus keeps rising, cools enough that eventually condensation happens and clouds form. The more moisture in the air, the faster this is likely to happen since there’s more vapor available.

But the other effect isn’t so obvious to nonscientists (me, for instance). Condensation also releases heat — 540 calories per gram of water, to be specific, Breidenbach said.

That released heat tends to keep the air warm enough that it will keep rising.

Put simply, even given the same air temperature, moist air is likely to rise farther, and generate more clouds, than dry air. This largely explains why thunderstorms are so ubiquitous in the equatorial tropics but relatively rare in deserts, where even on scorching days the only clouds might be cottony cumulus, the air not rising high enough to generate cumulonimbus (thunderheads).

One exception is the summer monsoon, which brings relatively moist air, usually from the Gulf of Mexico or the Gulf of California, into the American Southwest. Occasionally weather patterns transport some of that monsoon moisture into Eastern Oregon, and that situation is a significant source of storms here, Breidenbach said.

Thunderstorm development is a much more complicated topic than the simple scenarios I’ve described.

Mountains, with which we are amply endowed in Northeastern Oregon, can contribute to the formation of storms because they are a physical barrier that forces air to rise.

Cold fronts, though lacking the physical mass of mountain ranges, can have a similar effect, as the arrival of cold air at higher altitudes creates ideal conditions for warmer air near the ground to start rising and to keep rising. Cold fronts are also a source of moisture, Breidenbach said.