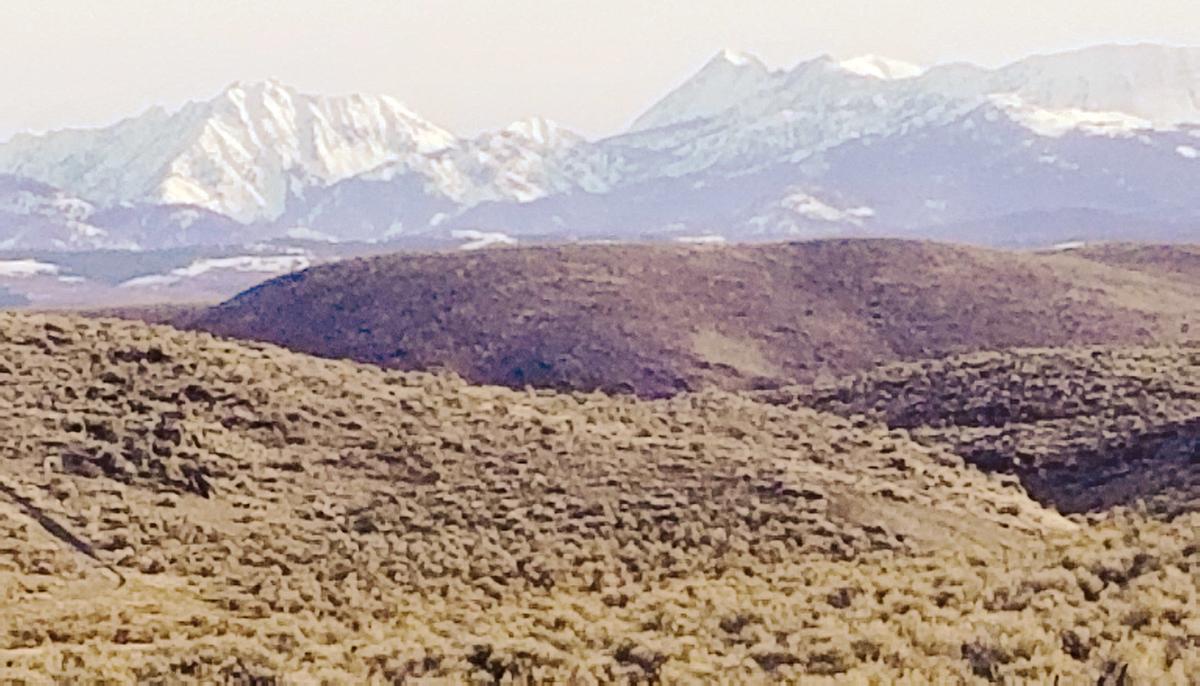 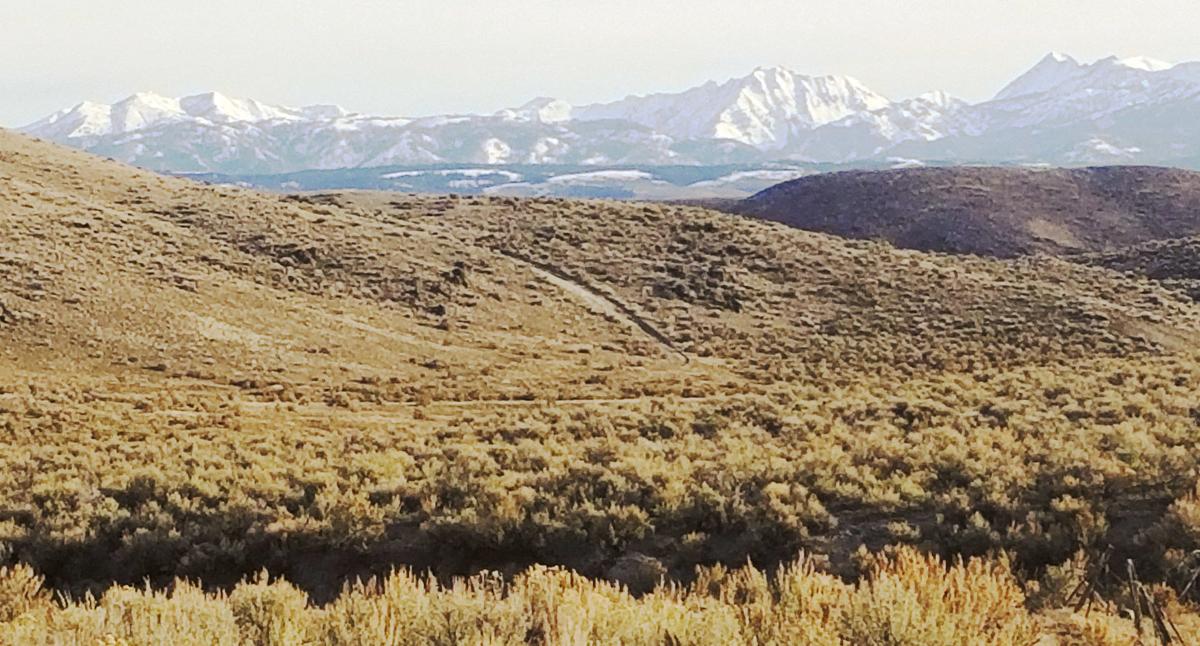 Expanses of sagebrush and grass predominate in the Virtue Flat OHV Area. 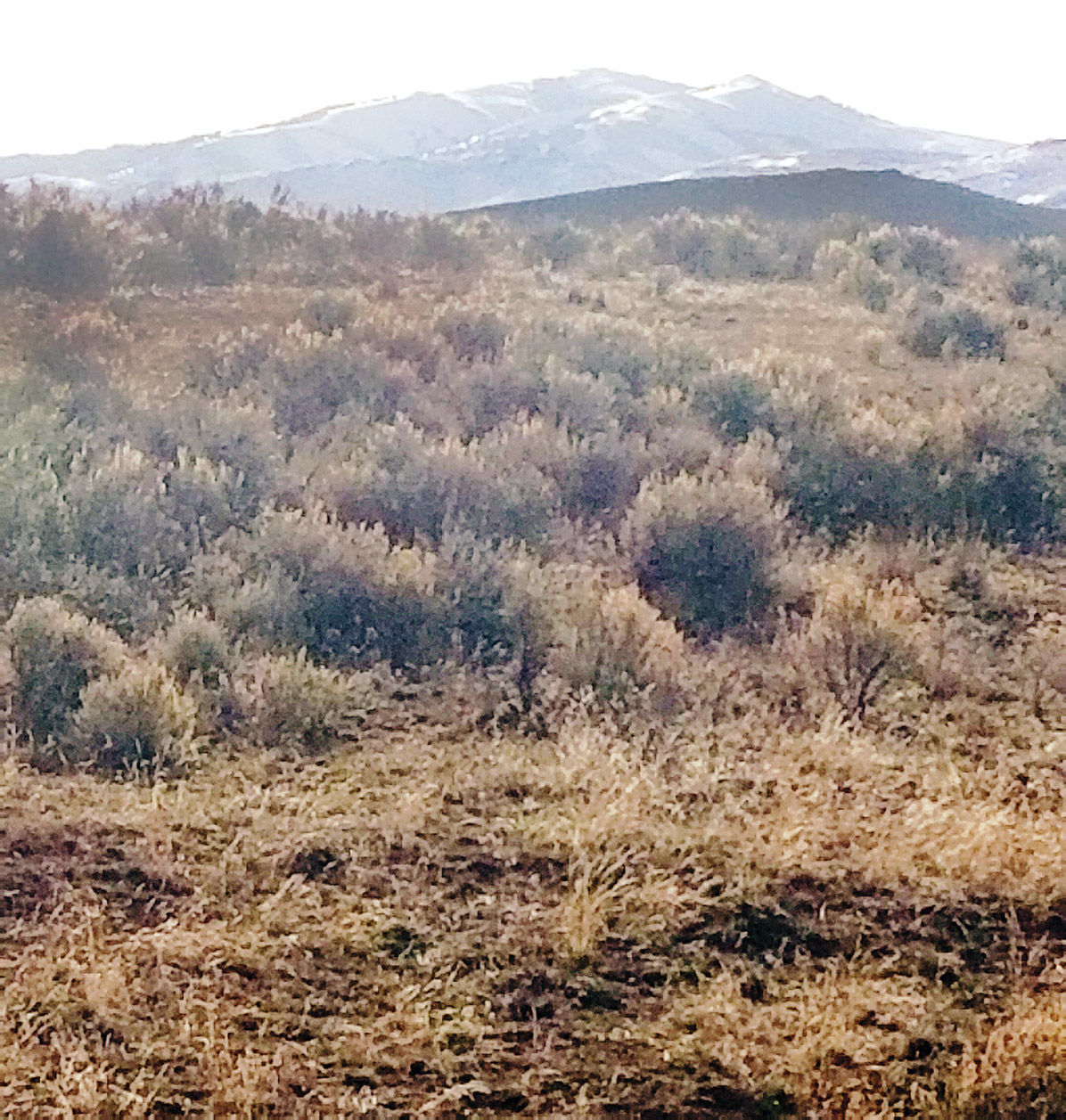 Mountains rise in every direction from Virtue Flat. To the southeast the snowy slopes of Little Lookout Mountain, which tops out at 6,676 feet, dominate the view. 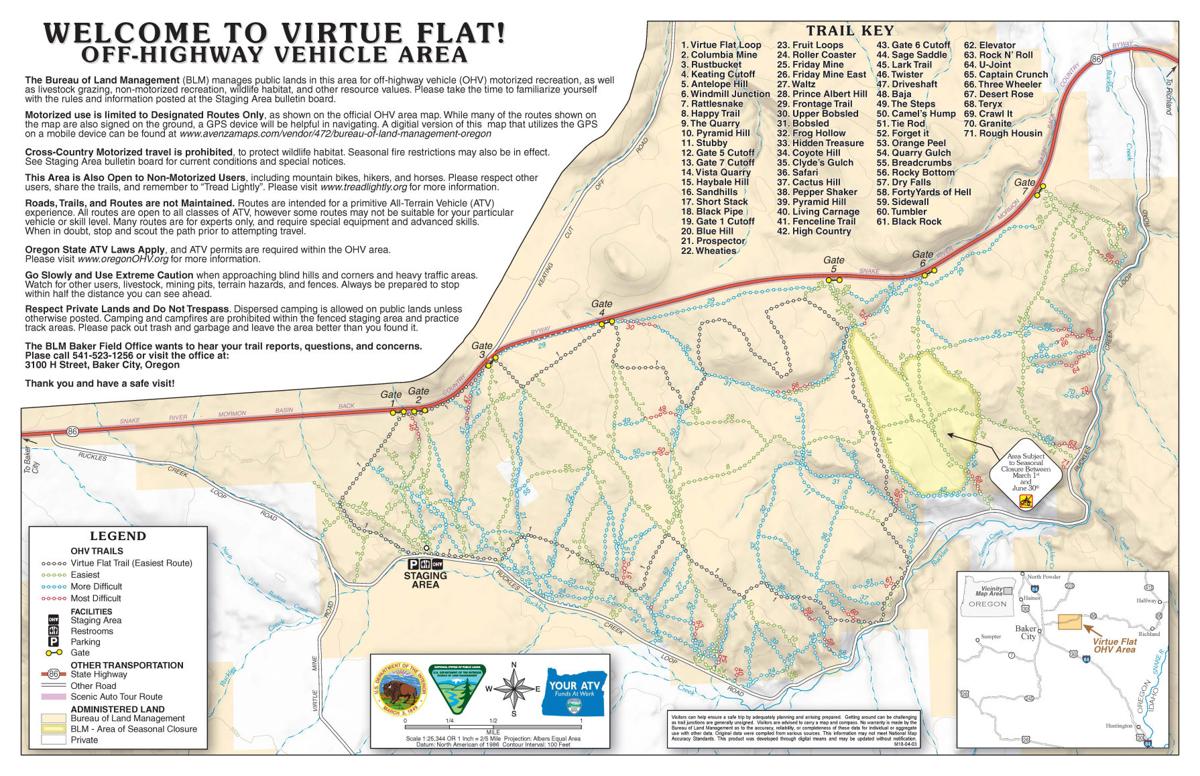 Expanses of sagebrush and grass predominate in the Virtue Flat OHV Area.

Mountains rise in every direction from Virtue Flat. To the southeast the snowy slopes of Little Lookout Mountain, which tops out at 6,676 feet, dominate the view.

A small section of the BLM’s Virtue Flat Off-Highway Vehicle Area about 7 miles east of Baker City is closed to public entry as of March 1, and the closure will continue through June 30. The map included with this story shows the closure area, which is on the east side of Virtue Flat.

The closure affects 250 acres of the 5,000-acre area, which is popular with ATV riders and mountain bikers, and is intended to protect natural resources. The closure affects all types of use, including hiking, horseback riding and travel by motor vehicles.

I was driving through the sage, hoping to find a mild spring breeze and the early buttercup, when I glanced in the rear-view mirror and saw a cloud of dust roiling in my wake.

In summer this would be a gritty, cornea-scratching annoyance.

But on the cusp of spring, I take the dust as a promising omen — a sign that I might get in some miles without having to lug around a couple pounds of mud on each boot.

This purgatorial period, with the snow receding and the temperature on some afternoons flirting with 60, can frustrate hikers.

We yearn to tromp around without having to lace up heavy winter boots and, like as not, snowshoes or skis.

Yet the mountain trails, no matter how warmly the sun falls across the face, will remain snowbound for months.

Hells Canyon, the lowest place around here, beckons with its promise of snow-free slopes. But the great canyon of the Snake River is too far from my home in Baker City for a quick jaunt.

Not so with Virtue Flat.

This 5,000-acre swath of public land is just a 10-minute drive from Baker City — maybe 15 if, as I typically do, you go to the eastern end of the area.

Virtue Flat is best known as a playground for off-highway vehicles. The area, which is overseen by the BLM, has a network of more than 30 miles of signed roads and trails, ranging from relatively smooth two-tracks to narrow, boulder-strewn dry washes where drivers like to challenge their purpose-built rock-crawling rigs.

But Virtue Flat is also open to hikers, mountain bikers and horseback riders.

It’s my favorite spot early in the season not only due to its proximity, but also because I relish the scent of sun-warmed sage after months marked by frigid winds and frequent snow flurries.

The herbaceous harbingers of spring — buttercups and grass widows and desert parsley, among others — also tend to blossom earlier at Virtue Flat than in most other places nearby.

But sometimes I’m overeager, lured into the sagelands by a particularly balmy day, only to find the ground still squishy with the remnants of winter frost.

Virtue Flat is no place for hiking during the thaw. The saturated desert soil makes a type of mud that clings with a tenacity that would impress the chemists who create powerful glues.

This glutinous interlude, fortunately, tends to be brief, spanning perhaps a few weeks after the last snowdrift has surrendered its moisture to the ground.

As I drove along Ruckles Creek Road on a recent morning, the southern boundary of Virtue Flat, the dust cloud behind me suggested that the ground was likely to be dry enough for hiking.

And generally speaking that was the case.

I came across a few soft spots, mainly in sheltered depressions where the melting snow must have formed a temporary puddle.

But most everywhere else the ground was either the typical desert hardpan, or churned to a fine dust by the passage of rubber tires.

I was a trifle early for flowers.

I did find a few clumps of grass widows thrusting from the soil, their light green stalks fresh and conspicuous against the dull desert backdrop of dun and gray. But the pale pink blossoms were still some days from brightening the scene.

Much about the desert is similarly ephemeral. I like that — like knowing that what I see is so brief, and the more precious for it.

I like to hike in the bottom of the dry gulches, where water might flow only once a decade if a summer thundershower rages long enough and over just the right patch of ground. I like to imagine what this shortest lived of streams looks like, to wonder how curious the chuckle of water tumbling between stones must sound like in a place where the only reliable noise is the wind.

I like to see how different the color of the soil is on the cusp of spring — as dark as chocolate pudding on the north aspects where the sun never lies for long and the moisture lingers, but trending to tan and even white on the sun-drenched south slopes, where in winter the snow comes off first.

But amid so much of a temporary nature there are all around the great mountains, solid and permanent.

Virtue Flat lacks any major high points, but from any of the modest ridges you can see at least one peak or range — and sometimes a few at once.

(Despite its name, most of the area is decidedly not flat. The actual Virtue Flat is mainly south of Ruckles Creek Road.)

The Wallowas, across Keating Valley to the northeast, dominate the scenery, as they do from so much of the region.

Parts of the Elkhorns jut above the intervening hills to the west, most notably the distinctive pyramid of Elkhorn Peak, and to the southeast loom both Lookout Mountain, a singular snowy dome, and its twin-summited neighbor, Little Lookout.

On the eastern horizon the visible peaks are all in Idaho.

The main parking area for Virtue Flat is just north of Ruckles Creek Road near the western edge of the area (see map above).