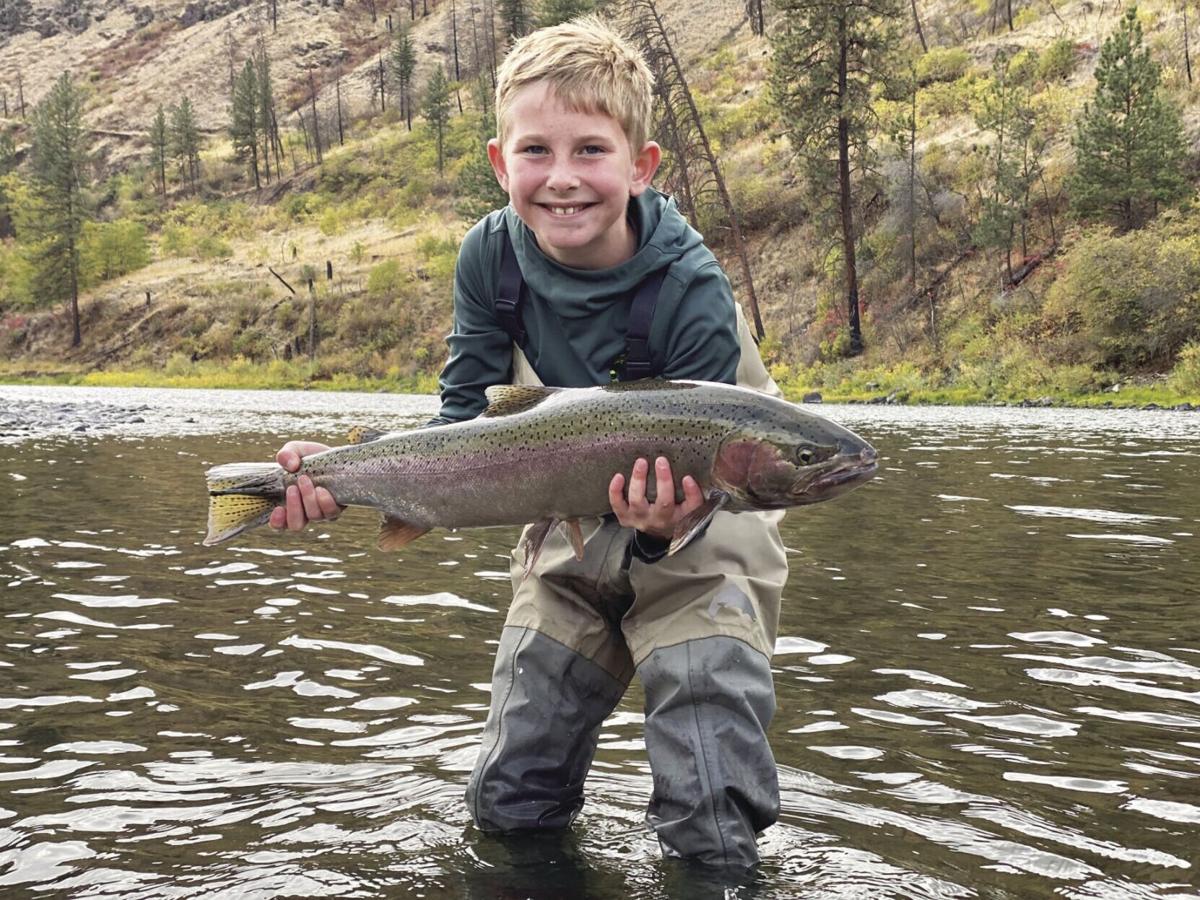 Brandon Yanke poses with a wild Grande Ronde River steelhead before releasing it back into the river. 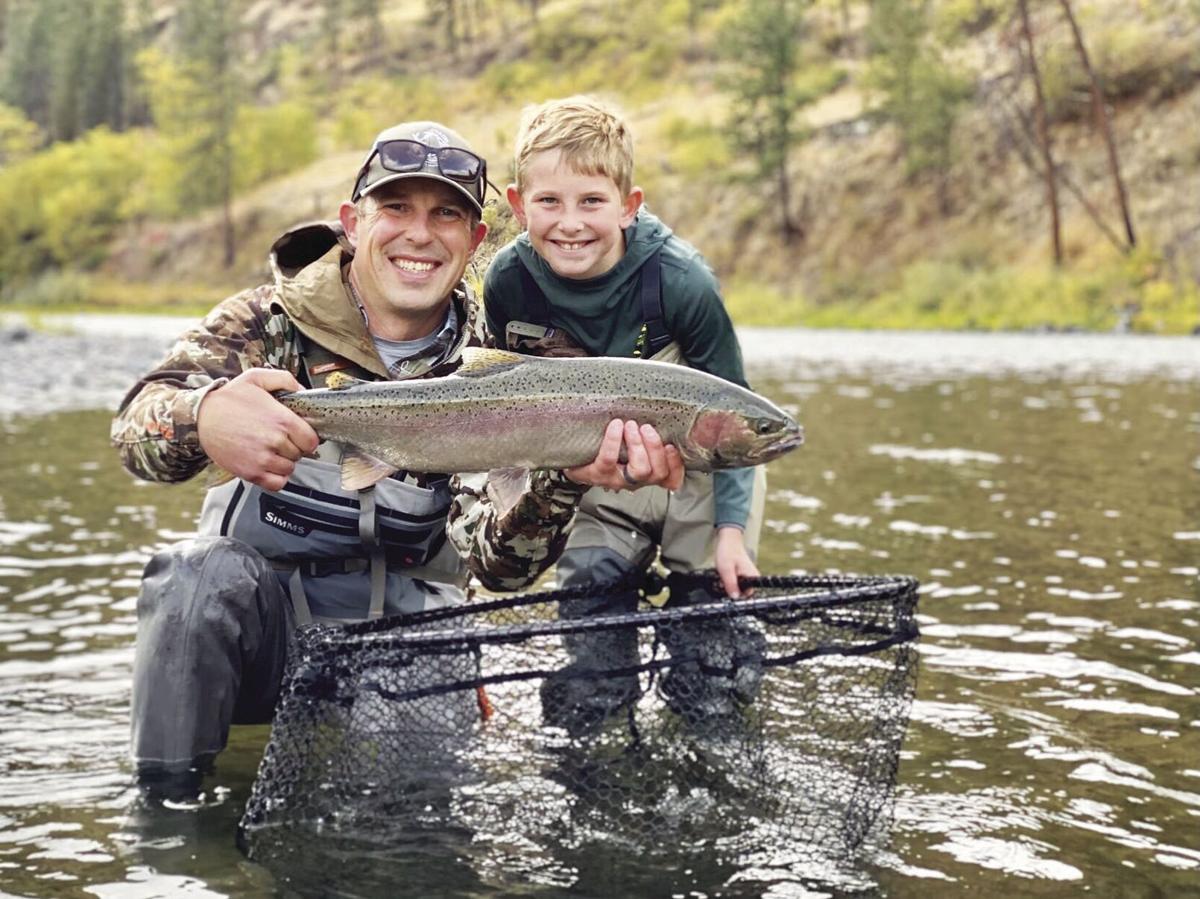 Oregon Department of Fish and Wildlife fish biologist Jeff Yanke and his son, Brandon, pose with a native-born steelhead that Jeff caught on the Grande Ronde River.

Brandon Yanke poses with a wild Grande Ronde River steelhead before releasing it back into the river.

Oregon Department of Fish and Wildlife fish biologist Jeff Yanke and his son, Brandon, pose with a native-born steelhead that Jeff caught on the Grande Ronde River.

ENTERPRISE — Following a trend set in recent years, anglers fishing the Grande Ronde and its tributaries for steelhead can expect a season of sparse returns and a disproportionate number of uncut fins this season.

“It’s been pretty tough,” said Jeff Yanke, district fish biologist with the Oregon Department of Fish and Wildlife in Enterprise. “Steelhead returns are still at the lowest levels we’ve seen in the last 10 to 15 years, slightly better returns than last year but not by much. Catch rates have been pretty low.”

Steelhead entered the Grande Ronde river system during September and October and have been awaiting a rise in water levels before making their journey upriver. The winter storm last weekend may well provide that boost.

But even if higher water levels do lure fish upstream, Yanke said steelhead returns are expected to be disappointing this season.

Hatchery-raised steelhead, easily identified by the smooth nub along the spine where their adipose fin was removed, have been returning in even more dismal numbers this season than their wild-born brethren, Yanke said.

“For about every four fish caught down there, only one has been a hatchery fish, and three have been wild,” Yanke estimated. “For those anglers that want to be keeping steelhead, it hasn’t been a great year. But if you like catching and releasing just wild steelhead, your catch rates are a little bit better.”

Yanke said the Grande Ronde and Wallowa rivers would likely see that 3:1 ratio of wild to hatchery steelhead, while the Imnaha River was likely to see roughly even numbers of each.

Wild steelhead cannot be kept by anglers and, when caught, must be released to spawn and die in their home rivers, thus completing their salmonid life cycle and depositing nutrients into the local ecosystem. Yanke said those nutrients are important for local plant and animal life.

Water from the Grande Ronde and Wallowa rivers is also used to irrigate farmland throughout the region.

Yanke said that a driving factor for the low steelhead returns were poor ocean conditions, which he described as being so complex that it “would be a days-long phone conversation to explain.” But he did note that warm ocean temperatures and a persistent El Nino weather pattern had contributed to poor survival rates for Pacific steelhead.

“It’s good to talk about,” said Yanke. “If Northeast Oregon steelhead were the only steelhead population in the Columbia Basin that was doing poorly, you’d expect that there were some localized things going on here. But it kind of paints a picture across the Columbia Basin of what’s going on with anadromous fish stocks.”

While hatchery fish might prove scarce for Northeastern Oregon anglers this year, Yanke said there would still be plenty of opportunity for steelhead enthusiasts to land one of the beauties, provided they were willing to be flexible.

“The great thing about the Grande Ronde fishery is that those fish will take anything, from nymphs, to swung flies, to spinners, to jigs under a bobber, to bait under a bobber,” Yanke said. “There’s so many ways you can catch steelhead, don’t get too engrained in using one method. If you can, throw a variety of things at them, increase your odds that way. Move around a bunch, and just be willing to put your time in. I think that’s the most important thing.”

Ever the challenge for the angler, patience and determination might well prove to be the difference between success and failure for Northeastern Oregon steelheaders this winter.

— Jeff Yanke, fish biologist, Oregon Department of Fish and Wildlife, talking about the steelhead run on the Grande Ronde River and its tributaries