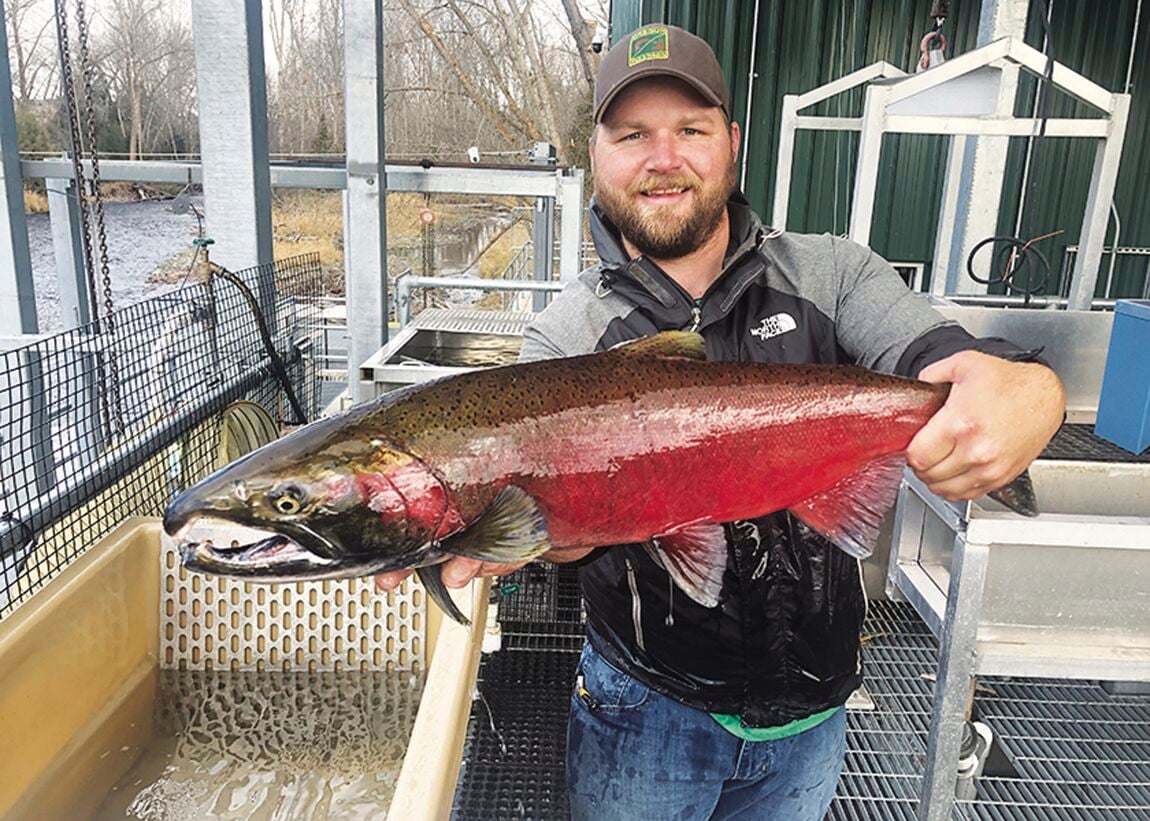 Kyle Bratcher of the Oregon Department of Fish and Wildlife with a Lostine River coho salmon trapped at the Lostine weir in Wallowa County in 2018. 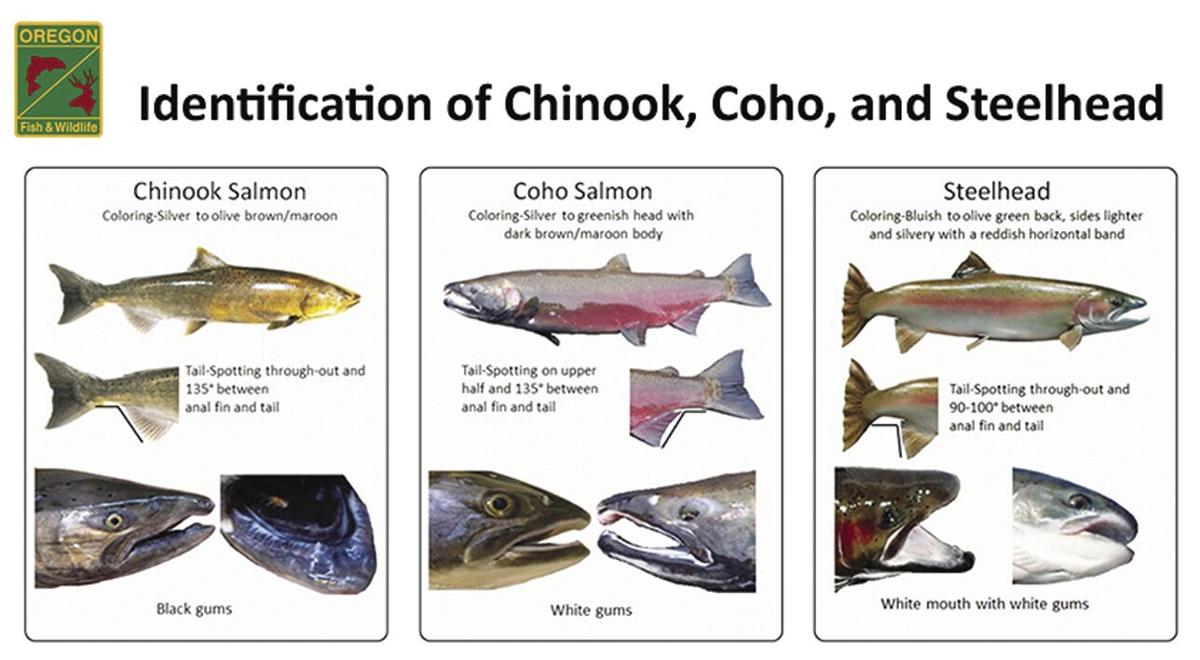 This graphic from the Oregon Department of Fish and Wildlife depicts the differences between chinook and coho salmon and steelhead, all of which anglers could potentially hook on the Grande Ronde River this fall. Anglers are not allowed to keep fall chinook salmon. The season is open for steelhead and for coho salmon. Anglers are encouraged to check regularly to updates on fishing seasons, which can change depending on fish numbers. Go to https://myodfw.com/recreation-report/fishing-report/northeast-zone

Kyle Bratcher of the Oregon Department of Fish and Wildlife with a Lostine River coho salmon trapped at the Lostine weir in Wallowa County in 2018.

This graphic from the Oregon Department of Fish and Wildlife depicts the differences between chinook and coho salmon and steelhead, all of which anglers could potentially hook on the Grande Ronde River this fall. Anglers are not allowed to keep fall chinook salmon. The season is open for steelhead and for coho salmon. Anglers are encouraged to check regularly to updates on fishing seasons, which can change depending on fish numbers. Go to https://myodfw.com/recreation-report/fishing-report/northeast-zone

Jeff Yanke was optimistic about this year’s run of Lostine River coho salmon, but he was still surprised by how many fish began battling their way up the Columbia River earlier in 2020.

This unexpected bounty has buoyed biologists’ hopes about the long-term success of their effort to reintroduce coho salmon to the Grande Ronde River basin. It’s also given anglers a chance they haven’t had since Ronald Reagan was elected to his first term as president.

The first coho fishing season on the Grande Ronde since 1980 started today.

The season will continue through Nov. 30, or until further notice, on the Grande Ronde from the Oregon-Washington border upstream to the Grande Ronde River Road bridge, about 7 miles above Troy.

“This is a bit of light in what has been a pretty dark period for anadromous fish runs in the Columbia and Snake River systems,” Yanke said. “It’s been a really hard five years to be a fish biologist.”

Coho, which are somewhat smaller than their salmonid cousins, the chinook, were once plentiful in the Grande Ronde basin, including the Lostine River, one of the major streams flowing from the Wallowa Mountains, Yanke said.

An estimated 20,000 adult coho returned to the basin annually.

But coho were extirpated from the basin as early as 1912 due to overfishing, dam construction and damage to their spawning and other habitat, according to ODFW.

State officials tried to restore coho runs several times up to the early 1970s, but though there were enough fish to have a harvest season as late as 1980, the salmon didn’t establish persistent runs.

The Nez Perce tribe, for which coho and other anadromous fish were vital sources of food, reintroduced the salmon to the Clearwater River in Idaho.

Then, working with ODFW, the Nez Perce in March 2017 released 500,000 coho smolts — baby fish — in the Lostine River near the town of Lostine.

Those smolts migrated down the Lostine, Wallowa, Grande Ronde, Snake and Columbia rivers to the Pacific Ocean.

Most coho spend 2 years in saltwater, although Yanke said some will begin their upstream migration after one year in the ocean.

In 2018 the first adult coho in almost four decades returned to the Lostine. That year’s run totaled fewer than 200 coho, Yankee said.

But Yanke said that despite that disappointing result, he and other biologists had reason to be hopeful about the future.

Climate models are forecasting a shift to a wetter, cooler pattern in the Northwest, a trend that typically results in “upwelling” of cold, nutrient-rich water moving toward the surface of the Pacific off the Oregon Coast, he said.

Coho, chinook and other anadromous fish tend to thrive in those conditions.

Based on coho numbers in the Columbia and Snake rivers this year, that seems to be happening, Yanke said.

The number of coho salmon counted at Bonneville Dam — this includes several runs in addition to the Lostine River fish — are well above the 10-year average, according to ODFW.

Some of those coho are tagged fish from the Lostine River run, and using those results, biologists estimate that as many as 3,000 adult coho will pass Lower Granite Dam on the Snake, the last dam before the fish reach the Grande Ronde River.

It was that projection that prompted ODFW to approve the first coho fishing season on the river since 1980.

“We knew that things were changing in the Pacific Ocean, and it’s always nice to see that that materializes in actual numbers of fish,” Yanke said.

The future of the coho run lies not in the Grande Ronde itself, however, but farther upstream in the Lostine River.

Yanke said the ultimate goal of the 5-year pilot project that the Nez Perce and ODFW started in 2017 is to have coho spawn in the upper Lostine and, potentially, other Wallowa County waterways, including the Wallowa River, where the salmon spawned in the past.

He said biologists have found smolts in the Lostine the past 2 years, which suggests some of the adult coho that returned in 2018 and 2019 spawned successfully.

Yanke said biologists will count adult coho that return to the fish weir near Lostine, then allow those fish to continue upstream. Coho usually spawn in November, he said.

Another objective is to have enough adult coho return to the Lostine River weir each fall — at least 500 fish — to serve as the broodstock for the run.

Those fish would be artificially spawned to produce the half a million or so smolts that biologists release each spring, usually between early March and early May, in the Lostine River to perpetuate the population.

Since the reintroduction pilot project started, adult coho have been trapped near Bonneville Dam, with the coho smolts then reared in the Cascade Hatchery near the dam before being trucked to the Lostine for release, Yanke said.

He said biologists would prefer to raise smolts that are the offspring of coho that made the entire arduous journey from the ocean to the Lostine. Salmon that return to the Lostine are “locally adapted fish,” Yanke said.

Dylan Isaacson has hooked quite a few fish but he’s never landed a salmon.

The Baker City angler hopes to fill that gap in his resumé this fall by landing a coho in the lower Grande Ronde River in Wallowa County.

Isaacson, who grew up in Baker City, said he fly-fished that reach of the Grande Ronde with his dad, Tom.

But Dylan said he hasn’t fished for salmon or steelhead, which return in relatively small numbers to several rivers in Northeastern Oregon.